ThieAudio‘s line-up of IEMs is growing by the day and it’s now made of two different lines: one is Voyager, part of which is the Voyager 3 which I reviewed a few weeks ago, the other is Legacy. The Thieaudio Legacy 3 looks an awful lot like the Peacock Audio P1, save for the colour, but it sounds completely different thankfully. It is in fact one of the best-sounding earphones in the sub-$150 range in my opinion – it may not have all the technical bells and whistles, but the tuning is done right.

Disclaimer: I received the ThieAudio Legacy 3 from Linsoul without paying a dime. They sell it for $129. 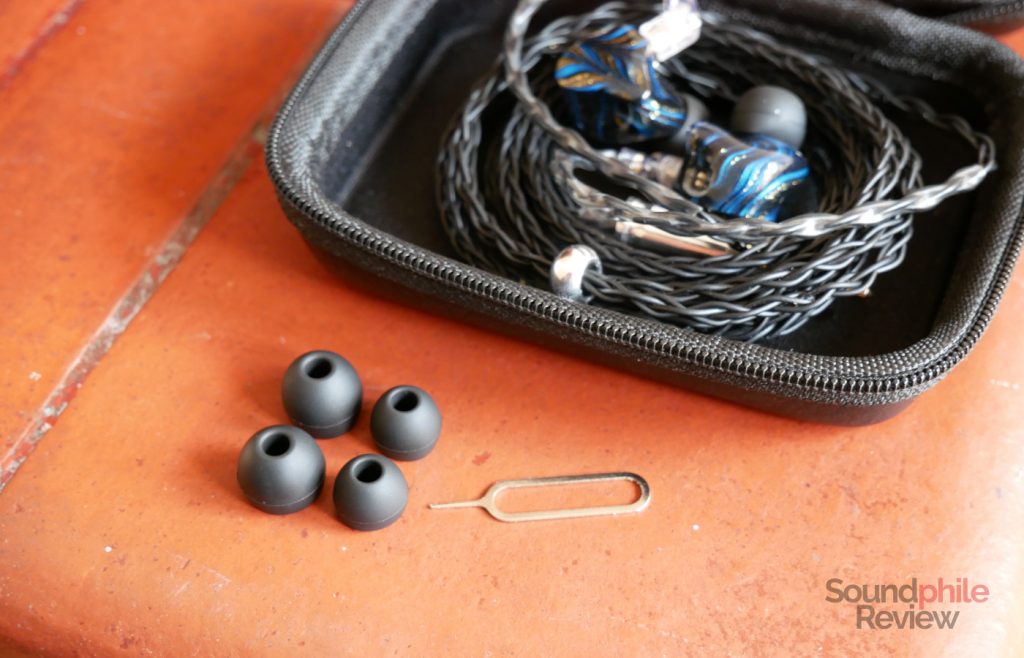 I received the ThieAudio Legacy 3 in a hard case covered in faux leather; it contained the earphones and several pairs of eartips. 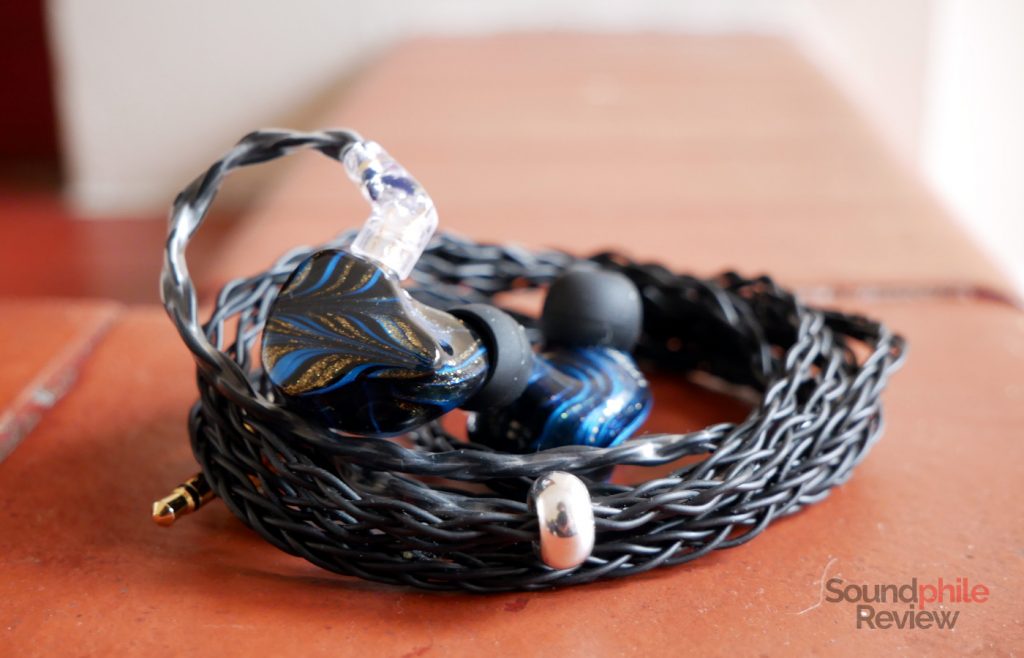 When it comes to design, ThieAudio undoubtedly took a page out of Peacock Audio’s book. With highly colourful shells, seemingly painted by hand, the new earphones appear quite close in style to the P1. It’s definitely unique, but it’s also not for everyone – I’m not a big fan of the colour scheme I received, honestly. It’s nice to see something different, however, so I’m not going to complain too much about it. From the perspective of shape, the ThieAudio Legacy 3 has a rather common shape – it’s similar to the vast majority of other IEM-like in-ear headphones. 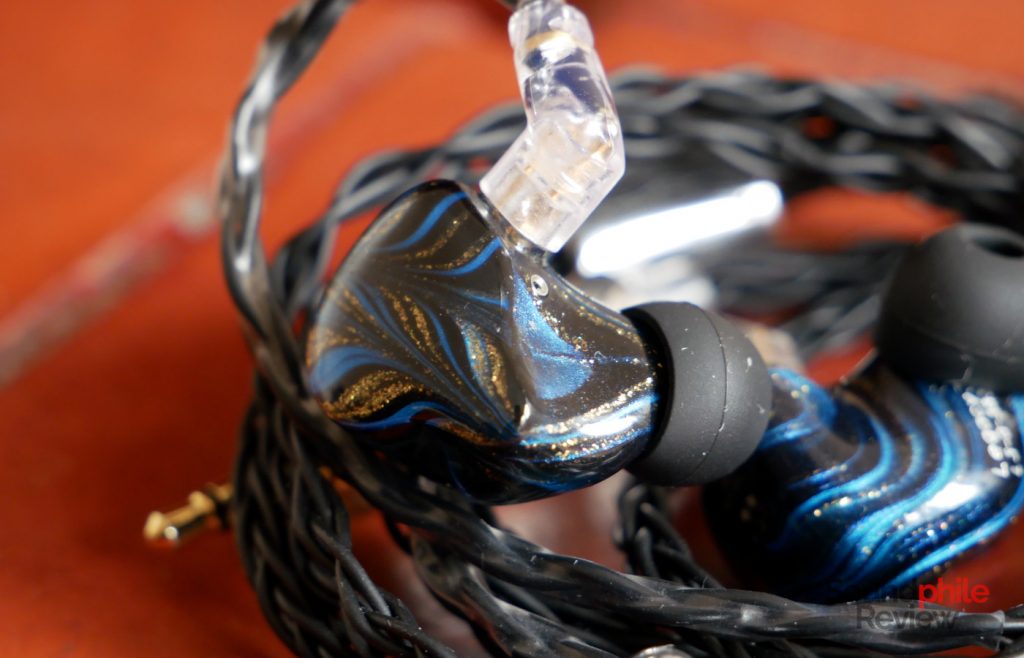 Like many similar earphones, the Legacy 3 are made of two fused pieces of plastic. They’re well assembled and the seam is completely invisible. The plastic feels solid enough and they survived a few falls without any scratch during my time with them – so unless you plan to severely abuse them, they should last quite a long period of time. 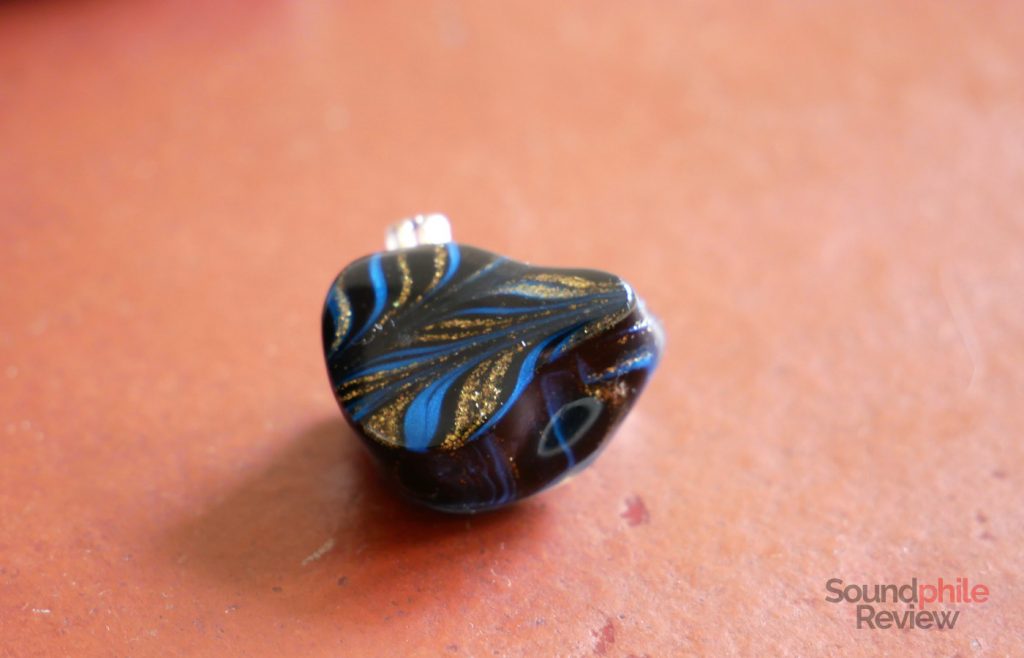 The shells are small enough that they’re very comfortable to wear, even for extended periods of time. I found myself wearing them for more than four hours and they would not cause me any issue by that point, so I can confidently say they’re quite comfortable. Your mileage may vary of course, but I guess that unless you have very weird ears they should be comfortable enough. 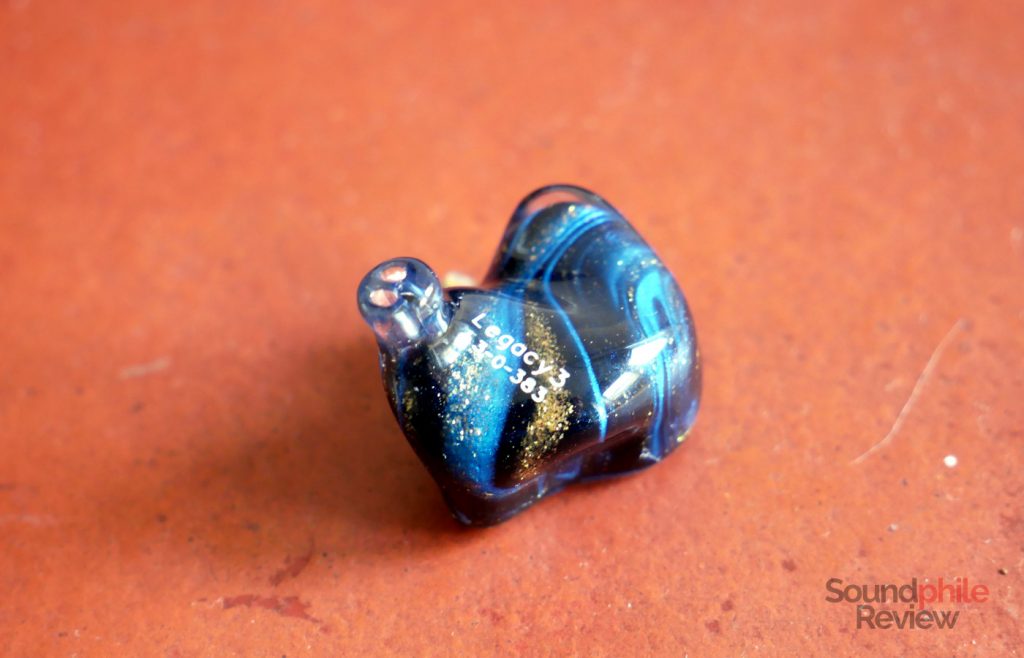 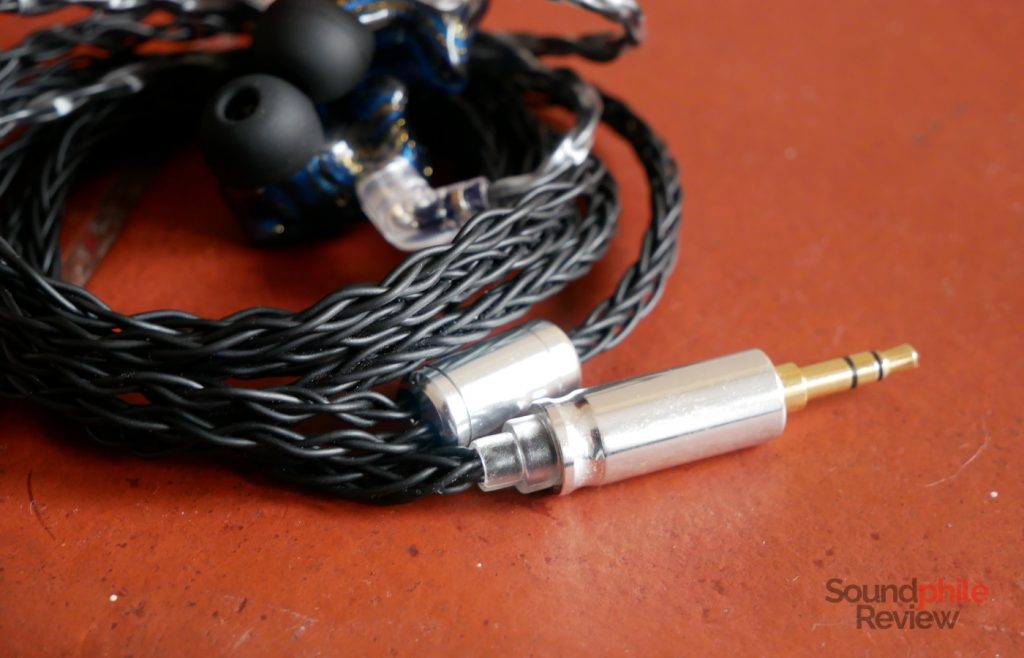 The cable is the only thing that doesn’t convince me completely. The reason is that the eight cores are individually sleeved with cheap-looking and feeling plastic that’s soft but tends to form kinks. It’s more about the feeling than about actual facts, but I’ve seen better cables out there. The housings (e.g. Y-split and 3.5 mm jack) are made of chromed plastic and add to the cheap feeling. Luckily there’s not much microphonics and the ear hooks, made using transparent thermoforming plastic, are adequately comfortable, so the cable does its job well from a functional standpoint.

I tried the ThieAudio Legacy 3 using a Topping DX7 feeding a Drop THX AAA 789 and an iFi nano iDSD Black Label. Source files were FLACs at 16 bit, 44.1 kHz resolution for the most part.

Whereas the Voyager 3 was not quite neutral, with a U-shaped signature that was enjoyable but not entirely accurate, the ThieAudio Legacy 3 takes a more balanced approach that’s really, really enjoyable while still offering a great deal of accuracy. Curious why?

Well, the soundstage has decent width for closed-back earphones for a start. It’s not expansive by any stretch (see what I did there?), but it’s still large enough to give you the impression of music being in a space that’s larger than the minuscule shells it actually is produced in. Let me be clear: it’s not wide, but it’s larger than music audibly playing directly in your ears. Imaging is also commendable, as each instrument is placed on the scene with adequate accuracy. Instrument separation is quite good and there may be slight issues in this regard only in the lower midrange area, as sometimes instruments are not really crispy in that area when there’s a lot going on.

Bass is very reasonably tuned. I wouldn’t deem it perfectly neutral, as it probably is a bit too much to deserve that appellation, but it’s still quite close to that. It’s really enjoyable because it’s present without being excessive, and it’s deep while also being well balanced internally so that you can hear the deeper notes without those taking the attention away from the mid-bass (and vice-versa). It’s a good all-rounder: I can listen to the American Beauty soundtrack or to a GoGo Penguin album as well as some bass-heavy electronica and all sound egregiously well. That’s also because bass is quite fast, so transients are immediate with a nice decay that doesn’t make it too dry. Detail is quite interesting as it allows quite a few nuances to pop out.

Midrange is relatively neutral, with a small accent on the upper region that makes everything a bit more vivid, but never crosses the line of being excessive. Quite the contrary, in fact, as midrange is well balanced and pleasant, mostly in line with bass and treble. The amount of details the Legacy 3 deliver in the midrange is quite astonishing honestly, considering they’re sub-$150 earphones. You can even hear some micro-details, which are quite rare at this price point. Overall midrange is quite satisfying.

I quite like treble: it’s not perfect, because what is?, but it offers enough zing and extension to come out as vivacious and airy. It hits the sweet spot between energy and enjoyability. It appears mostly balanced to me, with a slight emphasis on the middle region if anything, although that emphasis gives more air and openness rather than becoming fatiguing. It’s not super-extended, as after the 10 kHz mark there is a marked slope, but it’s acceptable by all accounts. It’s got enough detail that you can hear the various nuances of a drumstick hitting the cymbals, though the finest details elude the rendering ability of the balanced armatures. Overall it’s very well made, enough to keep satisfied even people like me who like to focus on treble when listening. 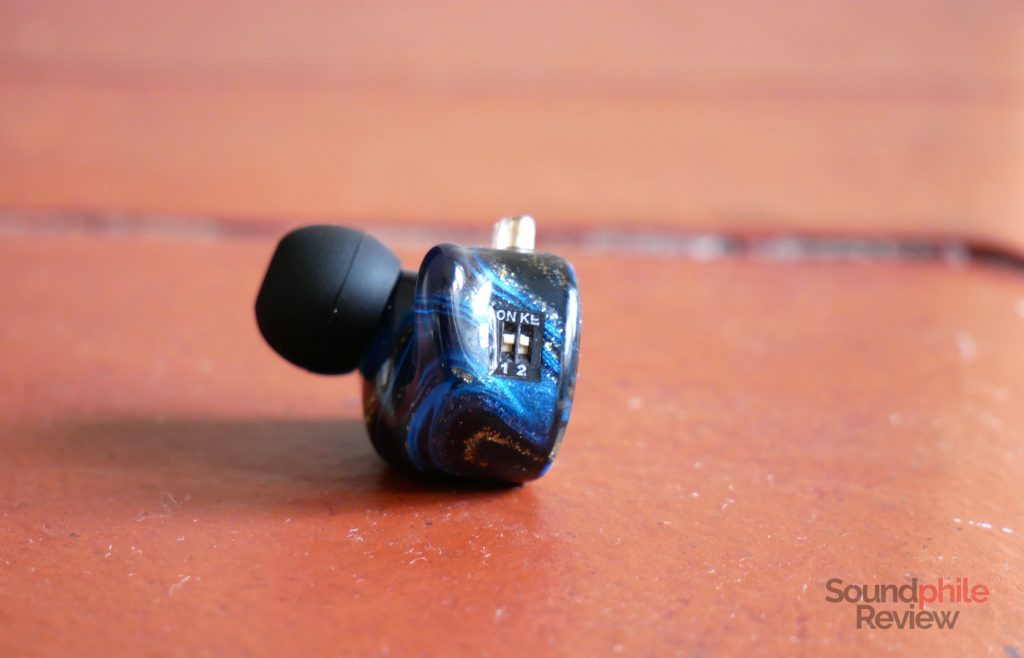 The Legacy 3 offers a tuning system through two switches. For the text above I used them in the “11” configuration (both switches active), but this is how they behave in the various configurations:

The differences are always small, but audible.

I’m going to compare the Legacy 3 to other earphones you may find interesting:

ThieAudio did not quite impress me with the Phantom, but they certainly have my full attention with the Legacy 3. These are great earphones for less than $150, there’s no doubt about that. They’re carefully balanced so that they can reproduce a variety of genres with good results. They may not excel at anything, but they’re quite good at everything – which to me is a more valuable characteristic. They have their own character which is quite likeable. Frankly, I’m surprised they’re selling these at this price point because they’re better than one would assume. They get my full recommendation and this is why they will join the Best of Soundphile Review page!