Innovation is not always about big, drastic changes, but about smaller improvements. That’s also true with headphones, with the latest trend being the inclusion of tuning switches on in-ear headphones. The Tansio Mirai TSMR-3 Pro are among this wave of user-tunable earphones.

Disclaimer: this unit comes courtesy of Lillian at Linsoul. The TSMR-3 Pro retail for $210. Additional information is available on the manufacturer’s website.

It seems like the package I got did not have everything it should have had, as it only included the earphones with no cable. I had to supply my own to try out the TSMR-3 Pro. There are then three pairs of black silicone tips and three pairs of white silicone tips, without the other tips that should be included (there should be three other pairs), but there are a small brush and one of those metal tools that are usually included with phones to remove SIM cards. 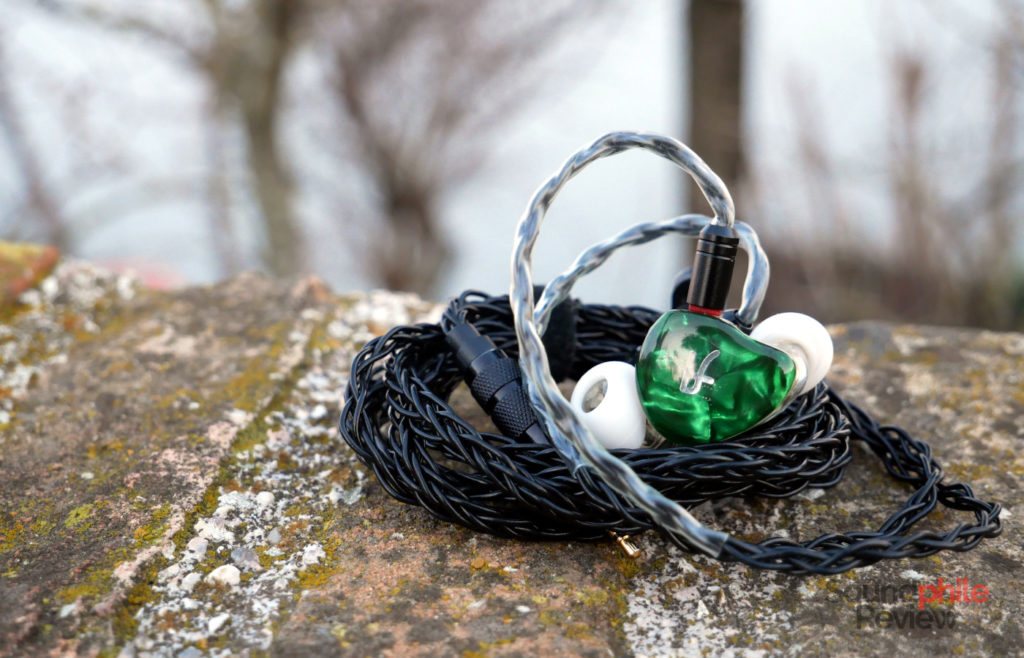 The Tansio Mirai TSMR-3 Pro are earphones made of resin and among those earphones that expose their innards – something which I especially like, as I said multiple times (e.g. TFZ No.3). The TSMR-3 Pro use a shell that appears to be made of a single piece, though I can actually see that there are air bubbles that separate the faceplate from the rest, so they appear to be at least two pieces fused together. There is no seam, so they’re really well put together! The 2-pin connector is flush with the body, so any cable with 0.78 mm pins should work just fine. 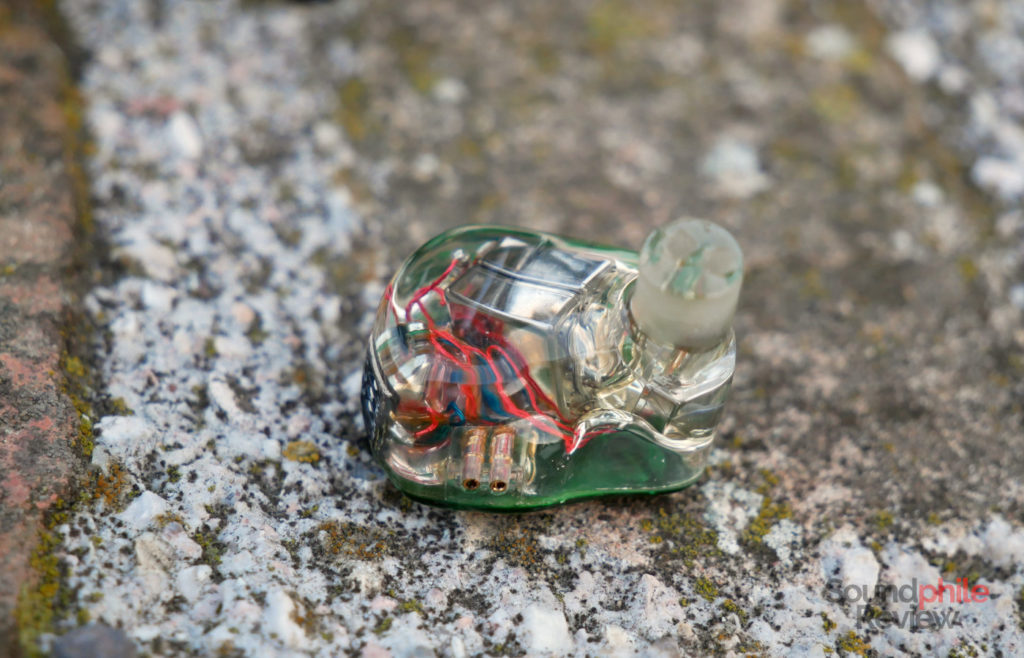 The design is  “traditional” in terms of shape, as the shells are triangular without any protrusions or valleys – they’re really plain and smooth, which is however a good thing from a comfort perspective. What I really like about the TSMR-3 Pro’s design is the colour: the faceplate is bright green in my unit, with a mother-of-pearl-like appearance and the “Tansio Mirai” logo and text in silver. There are various colour options available, and I find them all interesting.

The most apparent difference from “traditional” earphones is the relatively large switch panel on top of the shell: it is made of black plastic and it has three white plastic switches. They’re so tiny you have to use a pin to move them: even a ballpoint pen is too large. 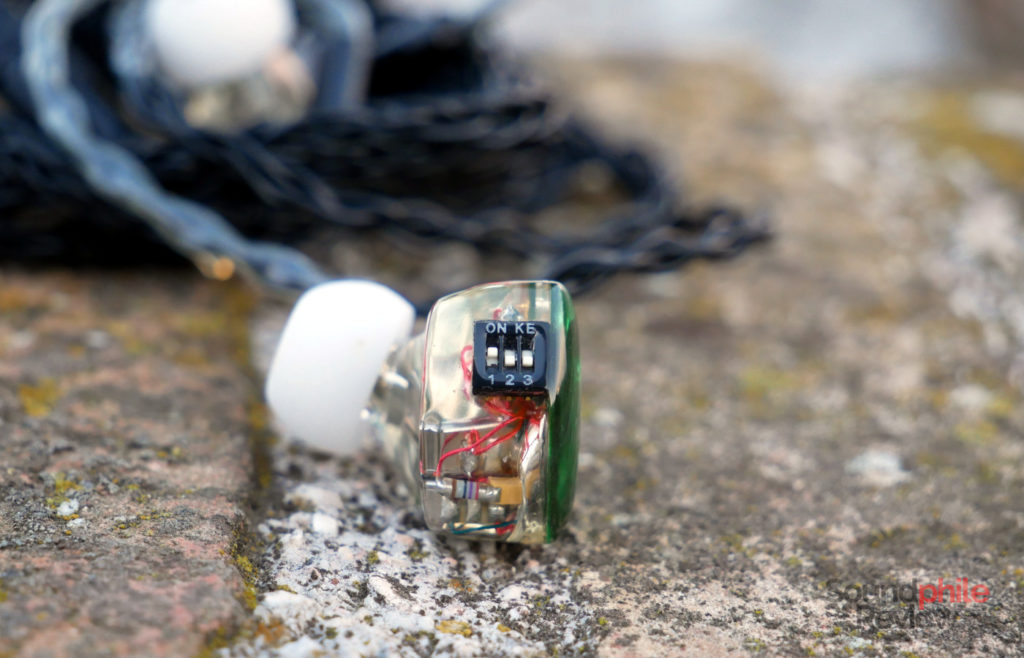 Build quality is really great: the resin appears to be high-quality, with a smooth finish on the shell and a rough one on the nozzle which is fused with the shell and has no lips: the rough finish allows it to grip the eartips. The TSMR-3 Pro have among the largest nozzle I’ve seen in universal IEMs. They’re a bit larger than those on the Moondrop A8, but they’re almost as large as those of custom IEMs. And that means they’re huge! The downside to this extreme size is that few eartips fit on the nozzle, so choice is limited. As a consequence it may be hard to find eartips that fit one’s ears well.

Comfort is unexpectedly good. The Tansio Mirai TSMR-3 Pro are large, but they’re also smooth and have no edges whatsoever, which greatly helps with comfort. I can feel some discomfort after a couple of hours, but it’s nothing serious. That applies to me, of course, but I have mid-large ears so you may have a different experience – comfort is always a deeply personal thing, so take my considerations with a pinch of salt. 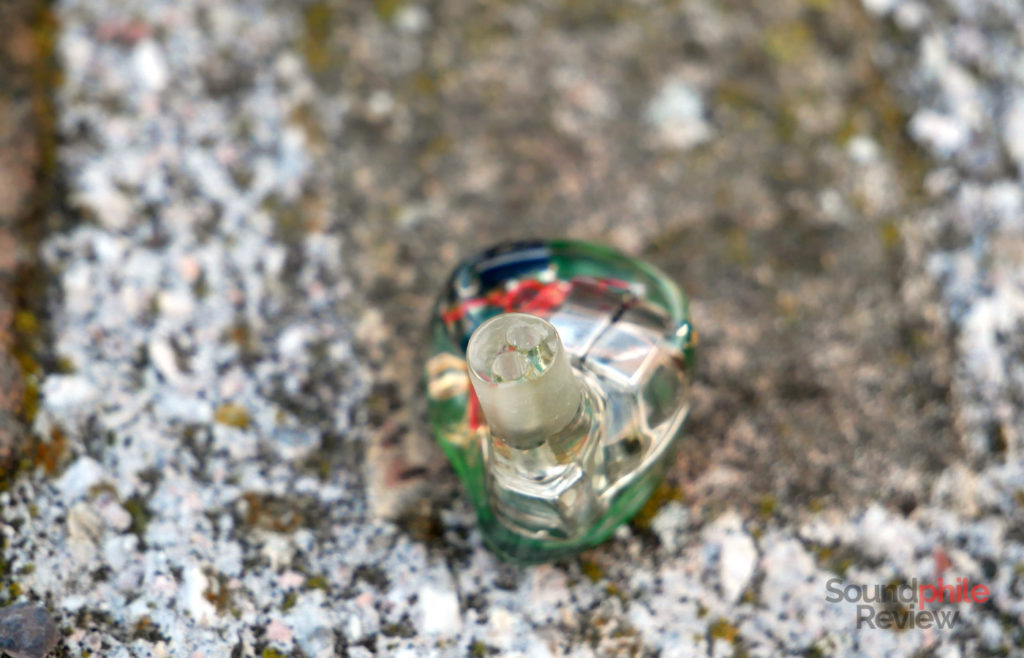 In my case isolation is limited even when using the largest tips. I find it really difficult to get a perfect seal with stock tips and this is probably directly linked to the poor isolation. Only when using foam tips I can get the right fit and seal. Even when using foam tips, though, I can’t really say that isolation on the Tansio Mirai TSMR-3 Pro is great; it is good, but it’s limited and you can often hear what’s around you clearly.

As I mentioned in the previous section, there was no cable included, so I used one that I had laying around (Yinyoo 8-core SPC cable). That’s the one you see in the pictures.

I tested the Tansio Mirai TSMR-3 Pro using a variety of gear including a Topping DX7 driving a Drop THX AAA 789 amplifier while I was in my home and a HiBy R5 while out and about. I used the same source files (FLAC files, mainly CD rips in 16 bit / 44.1 kHz).

The high sensitivity and low impedance of the Tansio Mirai TSMR-3 Pro make the presence of an amplifier not necessary and even redundant, as they can be powered effectively by any device including smartphones, notebooks and DAPs. As the name suggests, the TSMR-3 Pro use three balanced armatures: two Knowles 22955 for bass and midrange and one Knowles ED29689 for treble.

I find soundstage to have good width, slightly better than average, and some depth. Imaging is sufficient: instruments are well separated from each other, but it’s difficult to locate them spatially and there are no precise locations.

The overall signature is rather odd as the default configuration is somewhat V-shaped but in an odd way, as there’s emphasis on mid-bass and upper midrange. The odd thing is that in general it’s midrange that emerges clearly from the midrange, so it’s difficult to categorise the TSMR-3 Pro’s tuning.

All these differences are minimal, save for the 000 which appears really tinny and lacking any body. The changes are relatively small so one can’t really alter the signature drastically: it’s more of an ability to change little details than to completely subvert the tuning. I find the 100 tuning to be the most balanced one (as it tones down the upper midrange harshness and elevates bass a bit), but the following impressions are about the 010 setting as that’s the default one.

Bass is north of neutrality, though by a small margin. It appears to be mostly concentrated in the middle area, though, with some extension to the deeper section that however declines in volume quite rapidly and is therefore not too present in the mix. Overall bass is not linear, but it doesn’t have huge bumps that would make it unbalanced either. There is good speed as usual with balanced armatures, but this does not translate to a great amount of detail or to good physicality.

Midrange is probably the most coloured area as there is an apparent emphasis on the upper area which then goes on for lower treble too. This gives a very lively and clear tone to the music, but it also proves a bit problematic with instruments such as flutes, violins and trumpets which appear stronger than wanted in the mix, sometimes resulting into some piercing notes. On the other hand, those same instruments are often portrayed with plenty of energy and vitality. Take Bad Kids to the Back by Snarky Puppy: the trumpets are just great. This tonal imbalance is easy to hear though, as instruments which would require more presence in the middle area (guitars in that same track) appear a bit duller than they should. As there are balanced armatures behind the mids, they’re fast and not really physical. They’re well detailed though.

Treble appears to me not too extended and actually a bit too relaxed, as there is a good presence in the lower section but then a rapid decline in volume makes it almost inaudible. In general treble is de-emphasised compared to the rest, which leads to a lack in depth of cymbals and hi-hats. In fact treble appears behind everything else, which leads however to a laid-back tonality that can be enjoyable. Details are well represented and there are in fact even some micro-details.

Here are a few comparisons with the Tansio Mirai TSMR-3 Pro:

The Tansio Mirai TSMR-3 Pro’s default tuning is one that not many people would like: its emphasised upper midrange is often piercing and unpleasant. That can change thanks to the tuning switches system, which allows to give the signature a bit more balance and make the TSMR-3 Pro much more interesting. I personally found the “100” tuning the best, but here’s the thing: one can choose how to tune it according to their taste. And this makes the TSMR-3 Pro a rather flexible IEM.

Add to this the great build quality, good accessory set (if you get all of them…) and good comfort and you can see how they can be an attractive product. At roughly $200, they offer good value, although options with better tuning out of the box exist out there. The flexibility afforded by the tuning system may indeed be worth a premium, but how much is up to the individual user’s preference.