In the current day and age, one may be tempted to ask themselves “should I buy wired earphones or wireless ones?”. The answer the Peacock Audio P1 give is straightforward: why not both? They offer both a wired and a wireless experience thanks to a replaceable cable and the presence of a standard cable and a Bluetooth cable in the box.

As an aside, it seems like there’s another Peacock Audio on the market – they’re a Netherlands-based company which manufactures cables. Be sure not to mistake one for the other!

The unboxing experience of the Peacock Audio P1 is like no other I’ve had. The box keeps on surprising you while you remove each layer – as the contents are divided in strata, each with a different part of the accessory set. After one has taken all accessories out, they can find the earpieces, a cable with a 3.5 mm jack, a Bluetooth cable, two faux leather clips and a faux leather carrying case.

Peacock Audio claims they wanted to recreate the beauty of the peacock’s feathers with these earphones. The P1 are in fact quite unique in terms of appearance, but my personal taste says the unit I got is a bit tacky due to the flashy colours being used. There’s some beauty to it, especially as each unit is individually painted so that it’s unique, but I honestly like the units with a single colour more than the multi-colour one I got. It’s a deeply personal matter, so feel free to disagree! The Peacock Audio P1 stand out from the crowd without a doubt. 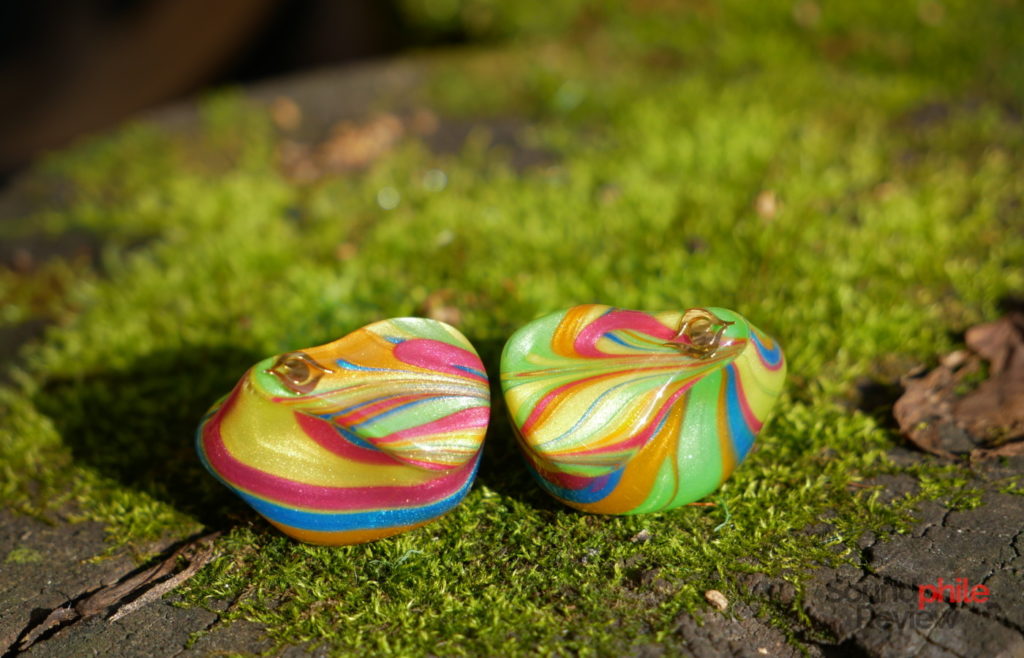 Purely in terms of design, the Peacock Audio P1 are quite unremarkable as they have a triangular-like shape with some ergonomic shapes that should improve comfort. They’re identical to the BGVP DM6, but smaller. The nozzle is part of the shell itself and has a metallic filter. 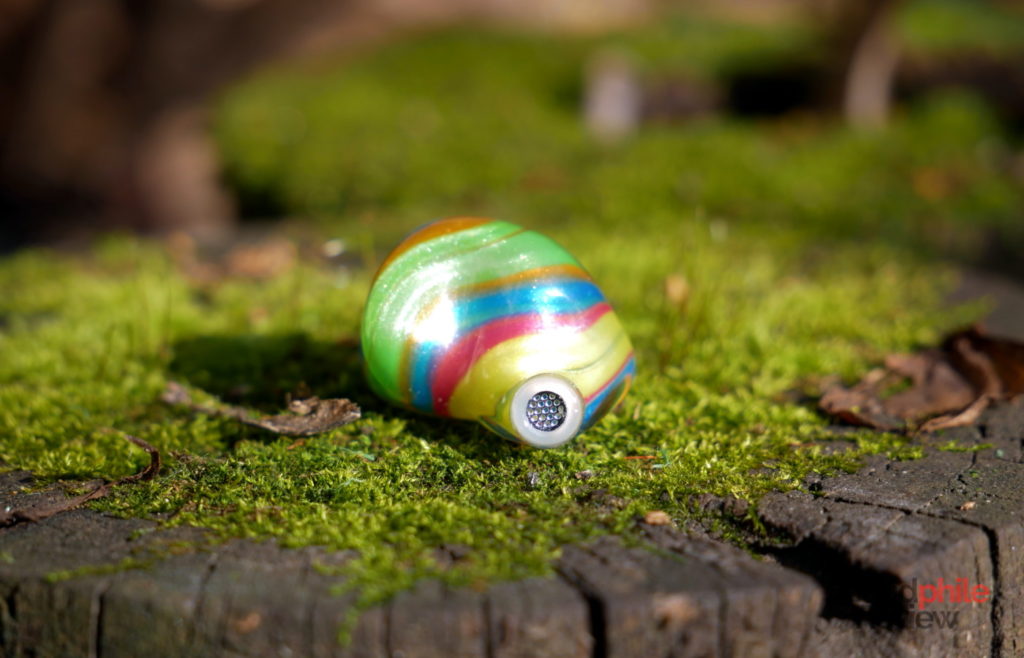 The small size and ergonomic shape help in making the P1 comfortable. I’ve had no trouble wearing them even for three hours without any fatigue (after switching cables: see below). They’re comfortable whichever tips I choose, which is quite unusual.

Passive isolation is moderate and I found that the P1 can’t shield you from louder noises effectively, forcing you to raise the volume in noisy situations such as commuting on public transport. 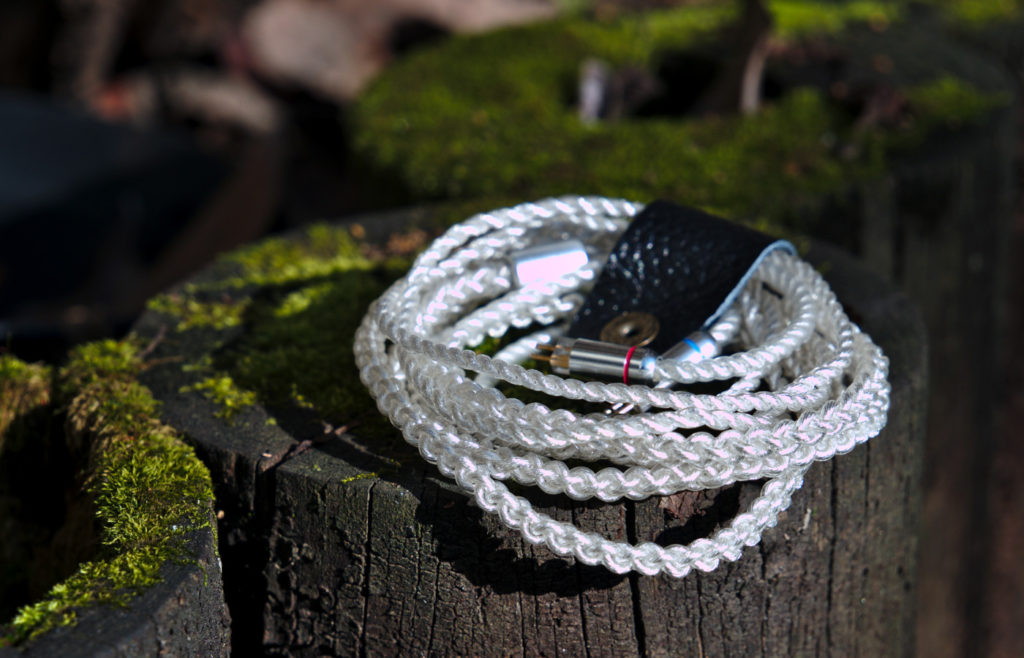 The cable is the only weak part of the P1: it’s stiff and it has very stiff ear hooks that press against the ears, causing a sensation of large discomfort. It is made of four relatively large silver-plated cores with a seemingly thin layer of transparent plastic on each one. It is braided between the 3.5 mm jack and the Y-split, while it is just twisted after that. It is a bit stiff on all its length, though I can’t understand why that’s the case – maybe it’s the plastic sleeve. Either way, I found it hard to use it for longer than half an hour.

The Peacock Audio P1 come with a Bluetooth cable and although that might seem like a contradiction, it’s a cable with 2-pin connectors which provides Bluetooth connectivity. It’s one of those cables meant to be worn around the neck. It has two housings, one of which hosts the electronics and the in-line remote (plus a micro-USB port) and the other which hosts the battery. It is decently well made, though it looks and feels a bit cheap.

It offers Bluetooth 4.1 connectivity and it is compatible with the aptX codec, so sound quality is rather good. The issue which plagues the cable is a strong background hiss which is always present and which is never covered by music whatever you listen to – and I swear I even tried death metal. It gives me huge headaches in a few minutes, possibly due to the frequency.

I admit I haven’t been able to try the Bluetooth cable too much due to the hiss and the subsequent headaches. I haven’t been able to assess its battery life. It gives you messages in Chinese (when it turns on it says something like “kai-chi” or “tai-chi”) which are understandable in context, but difficult to understand otherwise. It has good range and the connection is stable enough.

The Peacock Audio P1 offer a soundstage that’s wider than one would legitimately expect out of closed-back IEMs: while it doesn’t have much depth, it has very good lateral extension and sounds open and spacious. Imaging is sufficient, as the lateral imaging is quite good but the central one is not really satisfying. Instrument separation is decent, but little more: relatively crowded and complicated tracks put the earphones to the test.

Bass has good depth, though it doesn’t reach the deepest notes. It appears to be close to neutrality, with a bit more presence in the middle region that then rolls off as frequency goes up. There are good control and speed, though bass is far from being physical. There’s also a good amount of details, with tracks such as Massive Attack’s Angel (a true classic in testing bass response) where you can hear the bass string vibrating.

There seems to be a large peak in the upper midrange area which makes the sound of the Peacock Audio P1 especially fatiguing. It appears to be a large peak as even at lower volume levels instruments in this area are intense to the point of being piercing. Of course this leads to midrange being unpleasant. Tonally there are some issues, as male voices appear with less bass component than they should, and there is sibilance in general. Luckily there’s also a fairly good amount of detail, too, which at least gives the midrange a good quality.

Treble is the most problematic area, with various peaks that sound especially fatiguing. Listening to Azymuth’s Jazz Carnival one can hear the cymbals and hi-hat clearly dominating the other instruments. Lowering the volume to the point of the keyboard and drums being barely audible, the cymbals stay perfectly audible. There seem to be multiple peaks in the lower, middle and upper regions, so the pressure fatigue to be created by this variety of peaks, on top of them being significant on their own. These issues aside, treble appears sparkling and vivid – maybe even too much. It’s also well-detailed, though there are no micro-details.

Let’s pit the Peacock P1 against other in-ear headphones:

The Peacock Audio P1 surely look good, but their sound is not on par with their appearance. Their peaks make them very fatiguing not only in the long run, but even in the short one. They are technically more than decent, but their overall qualities are not in the same ballpark of other products in a similar price range – not to mention the tuning. Considering the purchase of a new cable is almost a necessity, it soon becomes clear that the Peacock Audio P1 are as good-looking as they are not able to stand up to their competitors.