FIIL made themselves a reputation with their wireless headphones, so it’s no surprise that they jumped onto the TWS wagon. The FIIL T1 X are a second-generation product, with the first being the T1, and they’re characterised by a sleek design and strong connectivity. FIIL targets the mainstream user and the tuning of the T1 X is a consequence of that, with a V-shaped signature. Not all that glitters is gold, though: read on to understand why.

Disclaimer: I would like to thank TikTech for providing this unit free of charge in order for me to write this review. They sell them for $49.99. Using coupon code “asgjyktv” you can get a discount to $42.5.

I was actually quite surprised to see how well-made packaging is for the FIIL T1 X. The earphones come in this cardboard box which presents them in a very nice way, displaying the earpieces outside of the case. There are then a manual (with a very sleek system to get it out: there is a sticker on one side that also keeps it closed), a set of eartips for a total of four different sizes as well as different earhooks and a USB to USB-C cable to charge the case and the earphones.

My only complaint with the eartips is that the large ones are actually much larger than the medium ones, so you might be stuck with tips that don’t work for you because they’re either too large or too small (that’s my case). 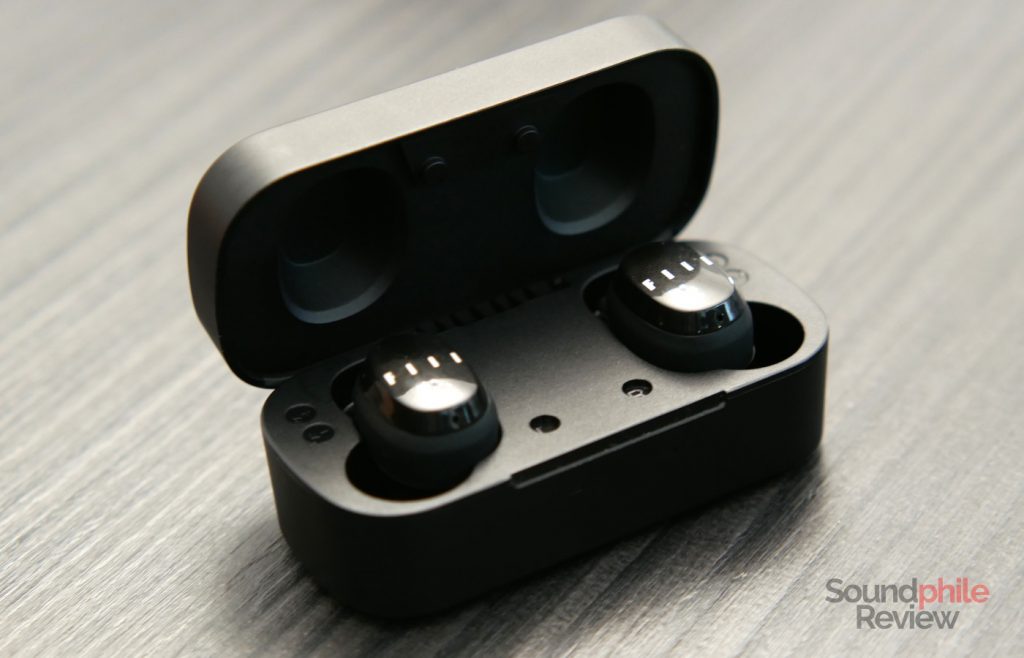 FIIL proposes a design for their T1 X, which are oval-shaped, that’s different from many other products currently available on the market. It uses curves and differing textures to create a design that’s modern and balanced. The faceplates are made of shiny plastic with the FIIL logo (stylised as FIII, for some reason), while the sides are covered with a silicone earhook. On the top is a status LED – not the first place I would put it in, but still reasonably accessible. As far as my daily usage of them allowed me to asses, the FIIL T1 X are built decently well and they even resist falls pretty well. They are IP65 certified, which is a bit unusual considering that this means that the earphones are more resistant to sand than they are to water. Although the rating is high enough for it to be safe to take the earphones under the shower, it’s still unusual (although useful) to see a higher resistance to sand than to water – most people don’t live in a desert, after all, so water resistance might actually be more important. 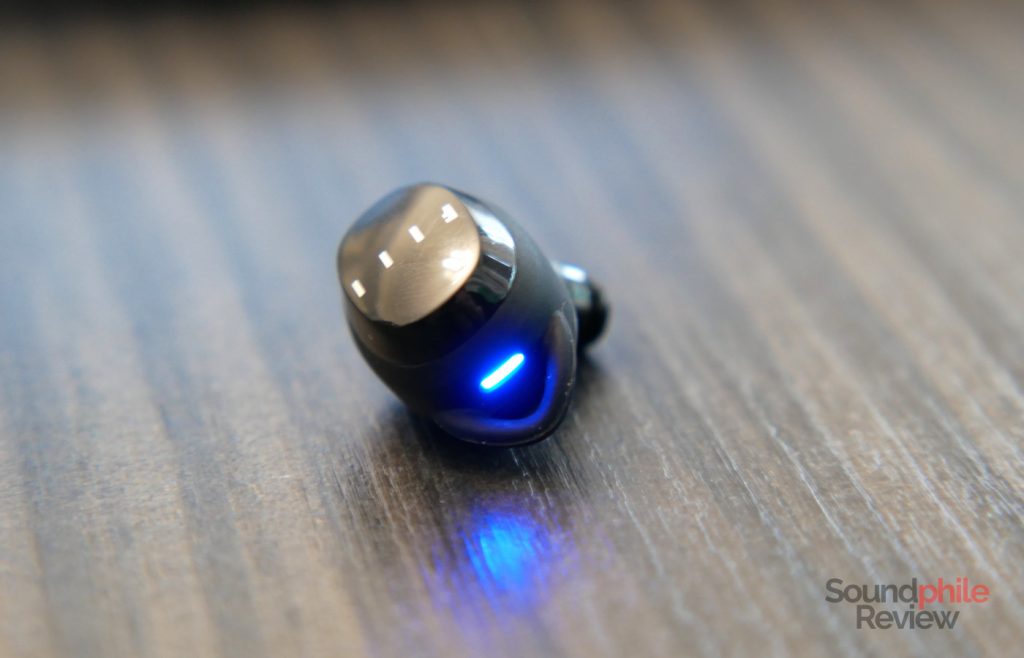 As the size of the earpieces is relatively small, I expected them to be comfortable. That’s actually the case, as they fit in my ears perfectly and stay comfortable even after a couple of hours of listening. The different earhooks also help keep the T1 X quite comfortable.

Passive isolation is limited, so you have to raise the volume by a significant bit when in noisy environments (e.g. planes). While I found that volume was still manageable, it was a lot higher than what I would normally use and I find this a drawback you have to take into account when considering whether to purchase these earphones. 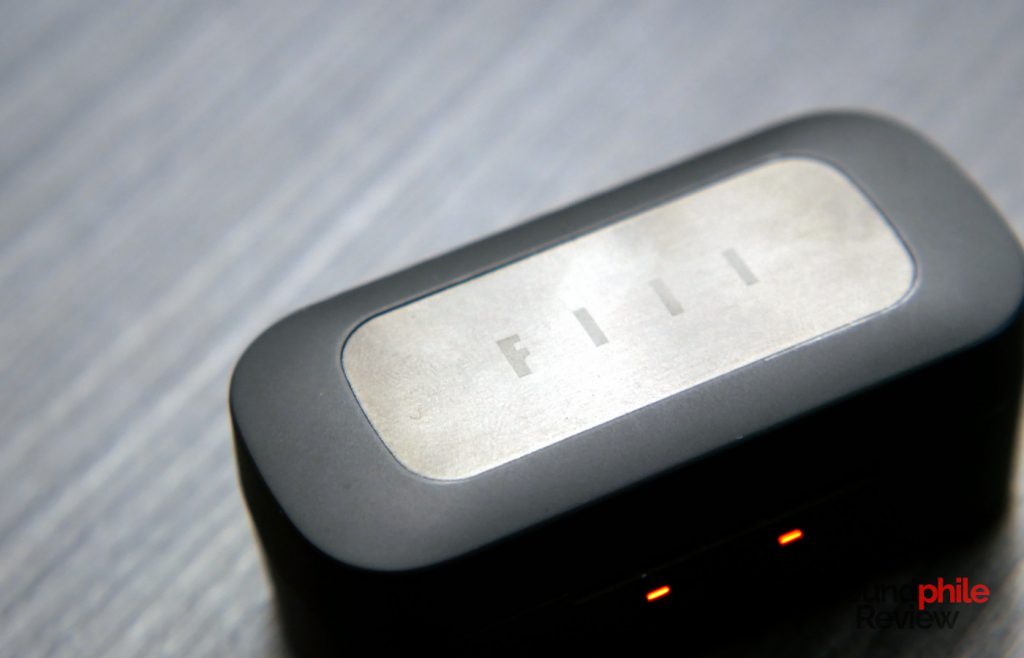 The charging case is actually quite nice. Although it’s very light, it is very well built, with no creaking or other signs of poor assembly or poor-quality materials. The lid has a metal insert with the FIIL logo on it which looks quite nice, although it’s just for the looks and ha no practical use. On the back there is the USB-C port for charging, while on the front there are two LEDs, one per earpiece, as they tell you which individual earphone is currently charging. Quite a nice feature!

My only complaint about the case is that the lid is not really solidly in place and wobbles quite a bit, mostly when it’s closed. It really doesn’t feel too robust.

The FIIL T1 X only offer the SBC and AAC codecs, meaning they don’t have access to higher-quality codecs. They use the Bluetooth 5.0 standard, though, which allows for almost lag-free connections.

The earphones can be used in mono mode and the company actually specifies that there is no “master” earphone, so you can take either one out of the case and it will connect to your device. If you then take the other one out as well, then it will join the already active one.

For some reason, when connected to my Shanling M2X the FIIL T1 X always play a “Bluetooth disconnected” message shortly after connecting them, even if the music is actually playing (and it keeps on playing without issues). It seems to me like the firmware is looking for some specific feature on the source device which is only available on smartphones and, when it doesn’t find it, it assumes there is no connection. This is a rather poor design of the user experience.

Controls are touch-based and are different between the two channels: the left one controls volume (more on that later), while the right controls playback and calls. One tap skips to the next track, two taps play or pause music (or answer/end calls), three taps go to previous track and one tap followed by a tap-and-hold bring up the voice assistant and reject call. All in all it’s quite an intuitive scheme.

The FIIL T1 X luckily offer volume adjustment and it is independent of the source, which is quite convenient since the lowest level I could achieve with my Shanling M2X without adjusting volume on the T1 X was still quite high. Alas it is reset every time you turn the earphones off and on again, as well as every time you adjust it on the source – which makes it much less useful than it could. To raise the volume one has to tap one time on the left earbud, while three taps make the volume lower. The implementation is far from perfect, though, and the taps are not always correctly registered so that trying to lower the volume actually raises it or pauses the music.

Unfortunately the microphone is terrible and requires you to keep one earpiece in front of the mouth. People consistently told me they could not hear me when I wore both earpieces in my ears, even though I was always in a very quiet setting (my room, due to the pandemic and everything). The earphones don’t power off when you put them in their case, which is – again – quite inconvenient. I found myself more than once plugging in headphones in my DAP only to find out no music was playing because the FIIL T1 X were still connected. This also has a direct impact on battery life, of course: if you forget to turn off Bluetooth on your source, after a while you might find that the earphones stayed on and drained all the battery. Again, this has happened to me a few times.

Speaking of which, the FIIL T1 X are advertised as being capable of delivering 24 hours of music and 36 hours of talk time (which is very weird, considering calls require much, much more energy). The good news is the claim about music listening time is at least partially upheld by my testing, as the earphones last for about 5 hours on a single charge and then offer roughly 4 additional charges. This brings the total to around 20 hours, which is close enough.

When testing the FIIL T1 X I paired it mainly to my Shanling M2X portable player. The music files were mostly FLACs in 16 bit, 44.1 kHz resolution.

The FIIL T1 X offer, like many other budget-orientated earphones, a V-shaped signature that privileges mid-bass on one side and upper midrange and lower treble on the other. This type of tuning is great to have some fun and for modern genres, but it is quite limited in the breadth of what genres sound good with it.

There is some audible background noise, especially if you listen to (relatively) quiet music. It follows the music with volume raises, which means that you can’t just overpower it by raising the volume of the music. It’s always present and it’s mostly high-pitched, so if you are sensitive to high frequencies you might get headaches in the long term (I do).

Soundstage is limited in width and especially in depth, with sound appearing as if it was coming from inside your ears (which it is, but it should give you the impression of coming from outside!). Imaging is very poor, with instruments being placed left or right, with no central position. Instrument separation is poor as well, with very little air between the various parts of the sound.

Bass is abundant and mostly focused on the mid-bass area, with very little in terms of sub-bass. This is, again, 100% mainstream sound that emphasises mid-bass to get that oomph most people want, but without actual bass quality. It’s in fact a slow, not-really-detailed, fat bass presentation that is largely forgettable. The bass bump is often such that it ends up in front of mids, covering them. It’s not worth any attention.

Midrange is a bit recessed, V-shaped with the central part being the most recessed area and the upper one being the most emphasised. This has an effect of male voices and instruments such as pianos and acoustic guitars appear more in the background than they should, but also gives more prominence to electric guitars, violins and female vocals. The unbalance is bearable, but evident and makes some track sound darker than ideal due to the large bass presence. The detail level is sufficient, but nothing more.

Treble is honestly very bad: its extension is extremely limited and there is audible distortion that crushes detail and makes it basically non-existent. The Queen’s The Miracle has cymbals sounding flat, mushy and muffled, as if the sound was compressed and ground, leaving you with just an amorphous blob of sounds. It’s really only fit for very casual listening, when you don’t want to focus on the details of music but on the lyrics.

The FIIL T1 X join the ranks of the too many “true wireless” earphones which deliver the usual, old mainstream sound with lots of bass and little else. In that regard they’re decent, but the completely inadequate treble disqualifies them from any audiophile pretence. They do have quite good features in other fields, though, with super connection quality, great battery life, good build quality and a very portable case. But I would not buy earphones based on these qualities, honestly, and that’s why I don’t recommend the FIIL T1 X to you: you can find (much) better alternatives on the market, such as the Lypertek Tevi.