While BGVP is mostly known for their IEMs, the company actually manufactures earbuds, too. The BGVP DX3S‘ peculiarity is its use of MMCX connectors, so that the cable is detachable and replaceable. In addition to this, they are actually open earbuds – so on top of the open nature of earbuds, as they do not close the ear canal, they are also open-back. I guess that’s as open as can be?

Disclaimer: Linsoul Audio provided the unit I tested. They offer it on AliExpress and Amazon at ~$54.

The BGVP DX3S comes in the company’s signature brown cardboard box (which is actually the same as the BGVP DMG), which holds the earbuds themselves, three different pairs of foams (one black, one blue and red, one ring-shaped black), two pairs of silicone rings with hooks and two hooks to wear the cable around the ears. A shirt clip is the proverbial cherry on top. There are lots of accessories here for a product that costs less than $60, which is pretty nice. The only thing that could be improved is the quantity of foams: providing different “weights”, with foams that have different densities, would allow for better tuning and comfort adjustment. 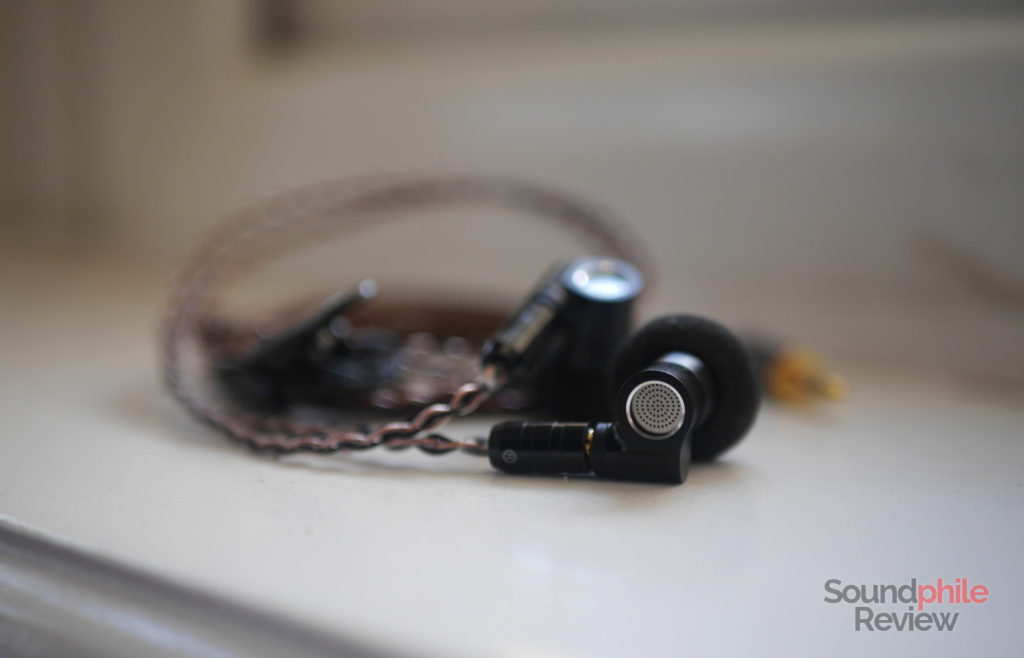 The BGVP DX3S is streamlined in its appearance, using a simple design that underlines its earbud nature. What I find odd is the fact that there is no indication of what earpiece is left and what is right, so you are free to choose it yourself. While this afford you a certain degree of freedom, much like the Tin Audio T2 and the Tin Audio T2 Pro, you’re never sure if you are using them the correct way.

The comparison with Tin Audio’s products doesn’t end there, though, as the earbuds do actually share a few design cues: although their shells are smaller, the BGVP DX3S is actually very similar to the T2, with a rounded, conical shape that has a protrusion where the MMCX connector sits. This is as far as it goes, but this it is enough to make it possible to use them both with the cable hanging down and with it running around the ears. 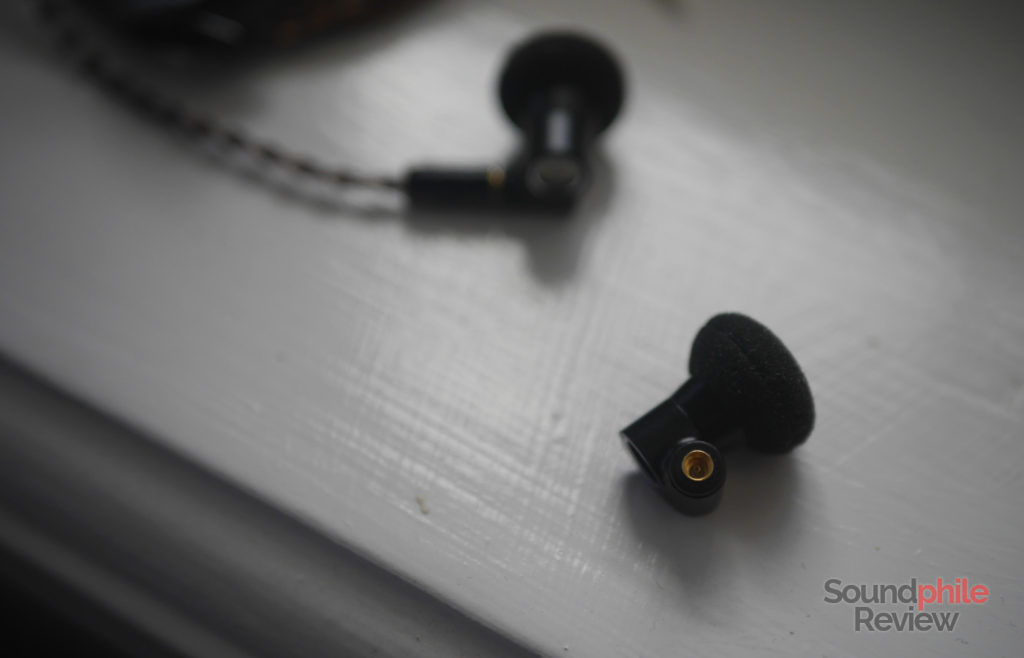 Design is simple and understated, expressed with durable materials: all of the shell is made of aluminium, which not only gives the DX3S some robustness and durability, but it also gives them a premium look and feel.

Build quality is generally good, though there are some inconsistencies. One of those is the placement of the grilles on the back: in my case one of them is off-centre, and that may have an impact on sound and not only on aesthetics. The cables are also not perfectly straight when connected to the earpieces, so I suspect the MMCX connectors are not placed correctly. Those are indeed minor flaws, and the rest is quite irreproachable. 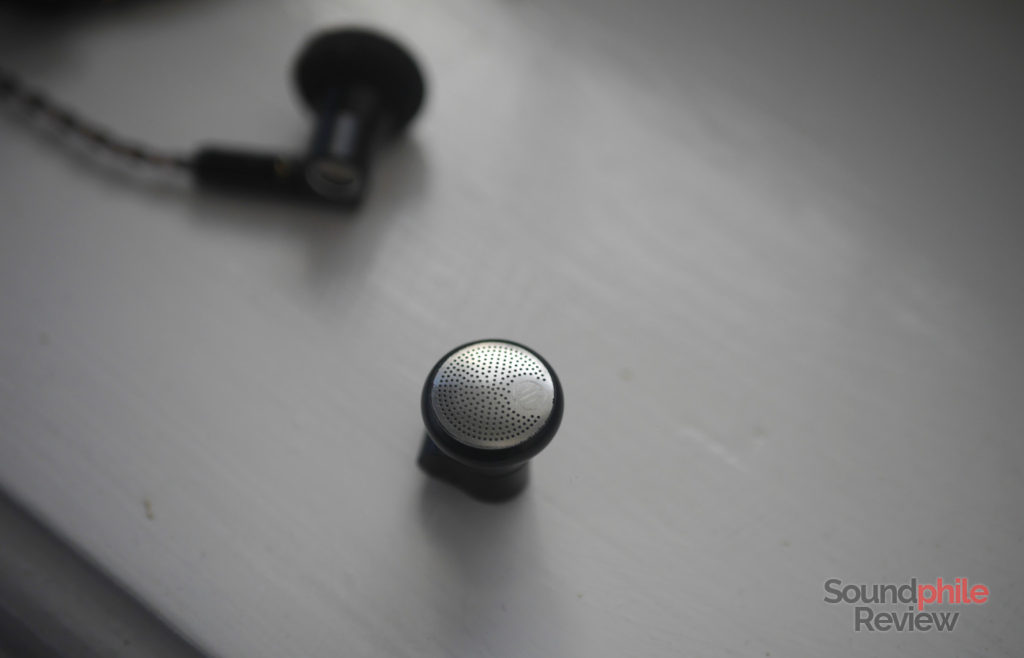 I found comfort to be highly dependent on how you ear the earbuds. Not only is it influenced by the style of wearing (wearing them with the cable running around the ears proves more comfortable to me), but it is also dependent on the angle of the earbuds. I always wore the BGVP DX3S using the foam covers as they are otherwise too uncomfortable to me, but I always have to play around with them for a little while anyway to get the perfect position. Even when I find it, though, I can’t wear them for really extended periods of time.

Stock cable is nothing special, really, though it is still high quality; it is made of eight cores that then split in two groups of four, half of them is black and the other is copper. It is decently soft, though not excessively so – it is nowhere near as soft as the Yinyoo 8-core SPC cable or the Kinboofi 8-core SPC cable. Generally speaking it seems to be decent in its build quality and fairly resistant, though I did not make any specific tests to support these claims. All the “boxes” on the cable (Y-split, MMCX connectors, jack connector) are made of aluminium.

Testing was carried out using a Topping DX7, a Venture Electronics RunAbout 2.0bl fed by a Topping D30, a Cayin N5ii and an Aune M1s. I also used an iFi IEMatch. Break-in lasted for about 100 hours. FLAC files in standard resolution were used, with sparse MP3s and hi-res FLACs joining the ranks.

Despite their 32 Ω impedance and 110 dB sensitivity, the BGVP DX3S seems to like (and need) power: maybe it is because they’re completely open, but I have to raise the volume much more than I would with other earbuds and earphones with comparable specifications. Truth be told, I have to raise the volume more than I would with the Venture Electronics Monk Plus, which have 64 Ω impedance.

What the BGVP DX3S is not is a technical earbud. Although it is decent in its technical ability, it is nothing more than that and it actually lags behind the competition in a few key areas. While soundstage has some good extension and presents you with a decently wide stage, even though it feels a bit narrow for open earbuds, imaging on the other hand is not as good as it could be and would benefit from being more precise in its positioning of instruments. Instrument separation is actually the Achilles’ heel of the BGVP DX3S, as it is poor and leaves you with a sense of music being a bit mashed up – there’s no clear distinction of the various instruments and they actually do not sound much detailed either.

The BGVP DX3S is characterized by a somewhat large presence of mid-lows and lower mids; in fact I would define the sound as a whole as warm, though there is also a small spike in the upper mids region that lends some clarity and brightness to it. In general, though, the balance is remarkable and the tuning is suitable for a wide variety of genres.

Bass does not extend too much to the lower regions; in fact it only hits 60 Hz with good volume and then it rapidly reduces its volume before it becomes completely silent below 40 Hz. Despite this lack of sub-bass, though, bass is actually massively present in the sound signature. This is because after the 100 Hz mark it really gains presence and power, being even a bit excessive at times. There’s never leaking over the midrange, though, so the sound stays clear and clean in this regard. Speed is not the best quality of bass on the DX3S, either, as it fails to deliver the small details and to correctly separate the different bass lines, ending up in presenting a mashed up lower section – especially in more complex tracks where multiple instruments play in the bass area. It’s muddy and murky, failing to deliver every detail.

Although bass can be invasive at times, midrange is never subdued by it and it stays in the front row; it is a bit warm in character, with the lower section being more prominent than the central one, but there is also a bit of added brightness in the form of some emphasis on the upper region. It is in fact the latter emphasis that creates a few issues and weird situations, as instruments such as electric guitars and violins appear more prominent (and even a tad shrill) than they should, to the point of causing slight discomfort in the long run in tracks where they abound. There is a good amount of detail, which however excludes the tiniest details and is in line with expectations on an earbud in this price range. No surprises, then.

Treble is a bit laid back; despite being present and decently detailed, it is relegated to the background and is therefore not always easy to hear it and to hear all the details. More often than not it ends being covered by the rest of the music, even when it should be clearly audible. Having that said, it is therefore not that easy to comment on its features. Detail is good, but the precision is not extreme – smaller details are lost. It is enjoyable nonetheless, as its laid-back nature makes it relaxing and easy on your ears. It is, however, far from being ideal in terms of how it presents details.

I found the BGVP DX3S to be very selective in the tracks they render well; in fact there are some cases where they can sound congested and closed (e.g. songs by Portishead) and others that sound really good (e.g. Gary B.B. Coleman’s The Sky is Crying). I did not find any specific trait d’union between tracks that sound good or bad, except maybe the presence of large amounts of bass.

Albeit limited on the technical side of sound, the BGVP DX3S is still an enjoyable earbud placed in an affordable segment. Their sound signature is tilted towards the lower end of the spectrum, but I never felt like they were unbalanced and that their tuning was not appropriate or that there were issues with it (e.g. excessive spikes or dips). My only complaint would be about bass being not on par with the rest of the spectrum in terms of quality: it’s often muddy and it loses a lot of detail and separation of all the different parts, resulting in a messy representation. This also has repercussions on things like instrument separation and soundstage, that are not as good as they could be.

There no other glaring issues, nor in tuning nor in any other aspect. There are a few areas where there could be improvements (e.g. inconsistent build quality), but BGVP did in fact a good job, but it stopped just short of greatness. It is however uncommon to find a good product like this in this price range, especially when talking about earbuds that are less widespread nowadays. There are better products out there for sure, but this one is still worth trying – especially since the better ones are often more expensive. The BGVP DX3S is a compromise, but it’s a good one.