The IEM world has been flooded with cheap Campfire Andromeda clones from China that try to imitate the design of the Andromeda without actually competing with them on the acoustic front. The PHB EM-023 is among those clones and it replicates the design almost perfectly while at the same time offering a unique approach to tuning.

Disclaimer: this is a free sample I received from AK Audio. They offer the PHB EM-023 on AliExpress at ~$40. You can, however, use the code “SoundphileReview” to get them at $32: when checking out, write the code in the message field, select “other payment methods”, place the order and then wait for an email confirmation of price adjustment before paying. 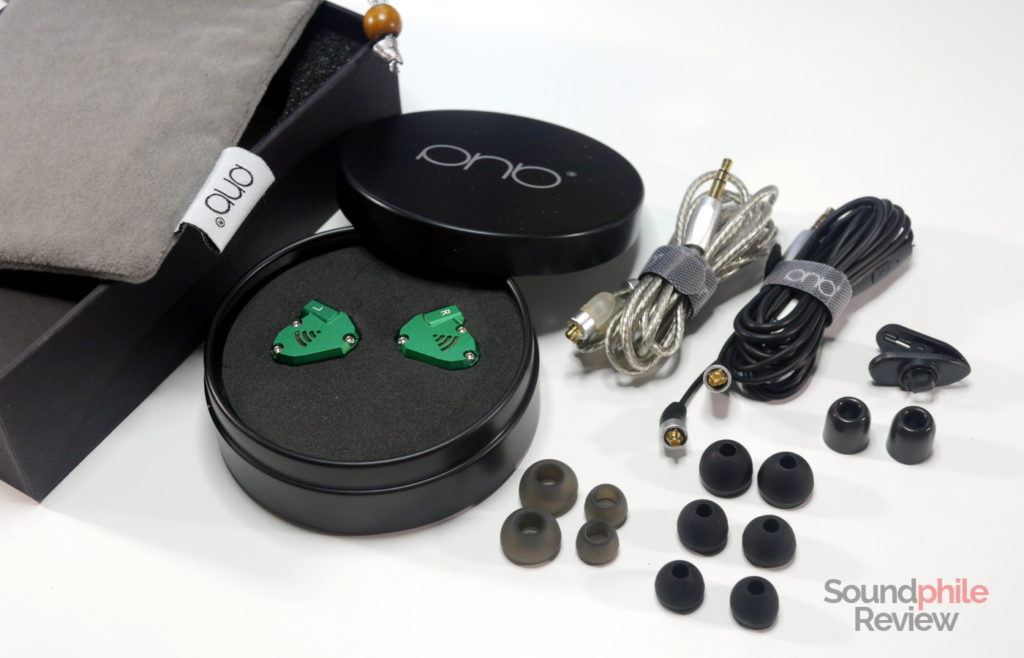 PHB sets itself apart with the EM-023 in terms of accessories provided in the box. The earphones themselves come in a metallic box padded with foam; the box also holds two cables, three pair of wide silicone tips, three pairs of black silicone tips, a pair of foam tips and a stringed fabric bag. There’s also a shirt clip to secure the cable against one’s dresses. 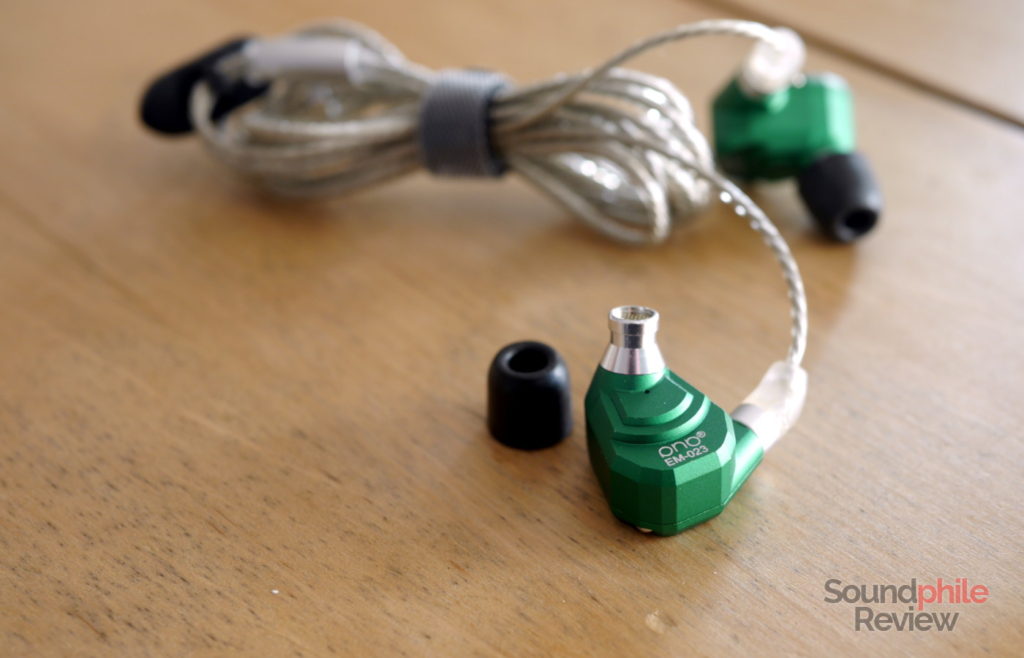 The PHB EM-023 is the umpteenth Andromeda clone, down to the colour of the shell. The shell itself is made of some magnesium alloy that’s very light and appears well cast, with the only flaw being the surface that is not perfectly smooth but has a few wrinkles on it. The green colour you see pictured is not the only one available: there are black and red hues, too, though the green one is admittedly the most Andromeda-like.

Speaking of similarity, the PHB EM-023 appears to perfectly match the original in terms of design. The only news is the presence of a grille on the faceplate that resembles the WiFi logo. Everything else is absolutely identical, down to the MMCX connector. 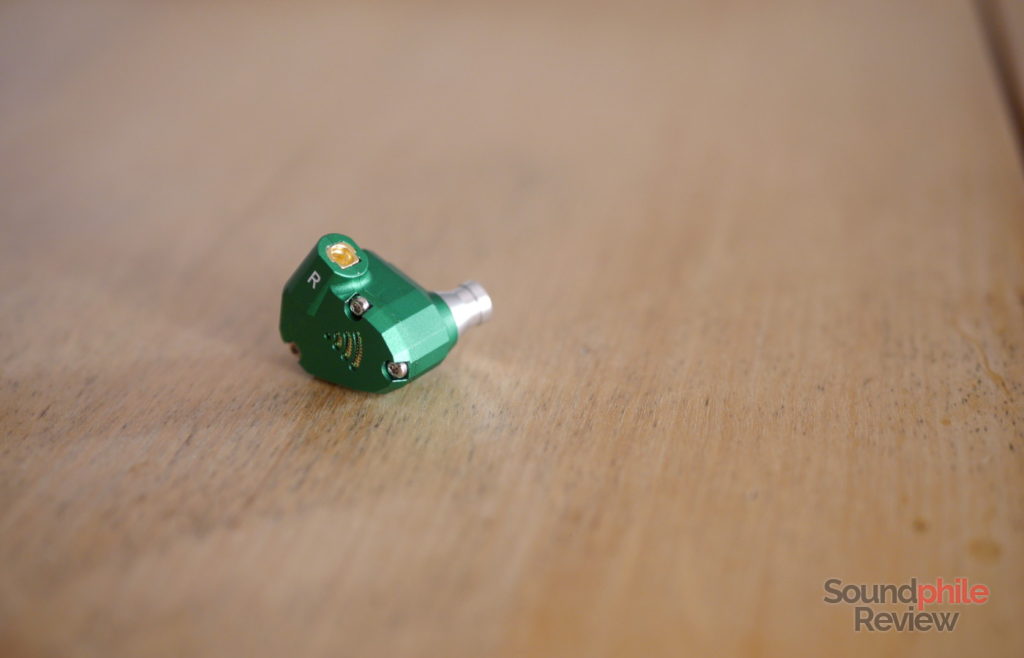 Isolation is decent and, although the PHB EM-023 is not able to remove external noise effectively, it can attenuate noise enough not to require you to raise the volume too much. Crowded places, busy streets, public transport and other noisy situations are not ideal settings to use the EM-023 in.

As this is an Andromeda clone, it is alas terrible when it comes to comfort. The clear-cut edges are a terrible design choice, as they cause fatigue after a little while and rapidly become unbearable. The large size of earpieces does not help, either. While comfort is generally subjective, the design choices here do not leave much room for subjectivity and end up creating an awful experience for the vast majority of people. 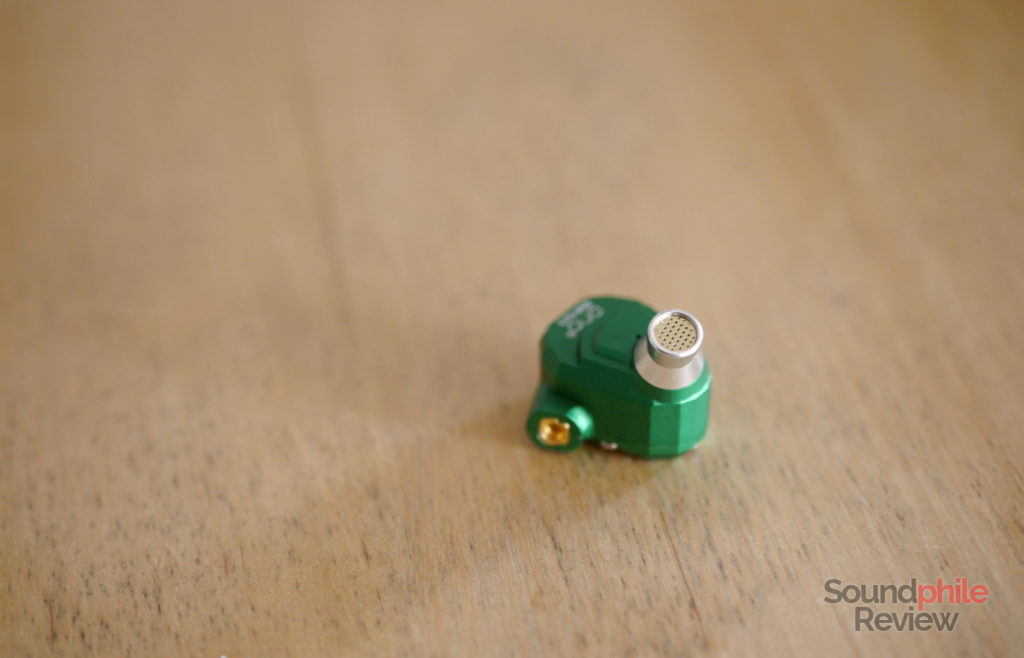 As I briefly mentioned in the paragraph about packaging, there are two cables in the box: one is a simple black cable with a remote, the other is a silver-plated cable without microphone or any other accessory. Both cables appear well-made and resistant, though a bit thin. There’s certainly a difference with cables such as the stock Magaosi BK50 one! They’re rather smooth, so the chin slider tends to slide off and be almost useless, but that’s pretty much the only real flaw they have.

In order to test the PHB EM-023 I used this equipment: Topping DX7, Topping D30 coupled with a Venture Electronics RunAbout 2.0bl, Cayin N5ii and Aune M1s. I also used an iFi IEMatch in conjunction with the silver cable. Source files were mainly comprised of FLAC files in standard resolution.

One thing’s for sure: they may be a Campfire Andromeda clone, but the PHB EM-023 are quite unique when it comes to tuning. Their sound signature is odd to say the least: bass is hugely emphasised, midrange is warm and recessed while treble has a huge spike in the middle but is otherwise very laid back. It’s not really V-shaped, but it is still far from neutrality (and balance, alas).

As for technical ability, the PHB EM-023 sits comfortably in a spot where it can hold its own against similar products. While soundstage is not exactly wide, often feeling small and congested, instrument separation is far better and actually makes one able to discern instruments with ease even in crowded situations. Imaging is pretty much in line with the other products in the sub-$50 price range, and is good but not exceptional.

It’s nothing short of surprising (and awesome, too) how much bass the PHB EM-023 can output. This small driver can really packs a punch! There’s enough bass for any basshead to rejoice, as it not only is there in large quantities but with good depth, too. It’s full and powerful, giving any bass-centred genre a boost in immersivity. It extends down to 40 Hz with good presence and then it rapidly rolls off to be almost inaudible at 20 Hz. It is surely massive, especially in the mid-bass range. It is however balanced well enough, so that it is mostly flat; it is just so much that it takes the spotlight and becomes the main ingredient in music. This is not to say it is overbearing; although it can sometimes leak over mids, it does not make the sound dark nor does it overpower the rest. Its presence is certainly cumbersome, yet it has enough good qualities to deserve some praise, too: in addition to depth, it has a few cards up its sleeve such as decent speed and good detail retrieval.

The PHB EM-023 deliver a very odd signature that complements a very warm base with an upper range that has a spike at the very top, where it borders with treble, preceded by a short (though large) dip. The result is a midrange signature that sometimes struggles to correctly represent instruments. There are a few cases where specific notes and instruments are hard to hear, especially in crowded recordings; I also met a few occasions where I could not hear things at all. Let’s take Falkenach’s Vanadis: though not the perfect record, the sound of rolling waves at the beginning should be always clearly audible, as well as the singer’s voice. Instead, the waves are not audible at all (unless you crank up the volume to insane levels) and the voice seems distant and almost suffocated by the other instruments, with drums and bass taking the front stage. The dip makes high notes barely audible and creates an odd contrast which makes some instruments go from being barely audible to being overly present and almost shrill. In other recordings, midrange is much clearer and more enjoyable, but it’s a hit-or-miss situation where you never know what you’re going to experience. In the general picture, however, midrange is not much recessed and it stands in a good position where it is easy to hear it; detail retrieval is more than decent and the separation of instruments is especially good in this region.

Treble is aggressive and sharp, with an over-emphasis of tones around 10 kHz and a lacking presence in the surrounding regions. Treble does in fact sound like it was made of a single note and it is as if it lacked body: there seems to be a large dip between 6 kHz and 10 kHz, so treble sounds like it lacked “warmth”. Everything sounds bright and even shrill. Yes, there’s a decent amount of detail (though it’s still limited, partly due to tuning), but that fact alone does not save it from being unremarkable if not annoying. Though it is not as overly-emphasised as on the ZS6, we’re still looking at a treble cannon that will annoy treble-sensitive people.

All in all I feel like the PHB EM-023 is a good choice if you like lots upon lots of bass, so it is great for genres such as trance and other electronic music. It may not be the best choice for acoustic genres or other genres that place a lot of emphasis on the midrange. This is not to say that it will sound bad, just that it won’t sound as good!

As this is an Andromeda clone, let’s compare it to other clones:

All in all the PHB EM-023 are not bad – though their tuning is not for everyone. Their powerful bass is not for the faint of heart, and their sizzling lower treble can be fatiguing even for non-treble-sensitive listeners. But they’re certainly a lot of fun. Their massive bass is enveloping and immersive, leading to music being almost as powerful as if you were in a club – because that’s the kind of music you may want to play with these earphones.

Their incredible set of accessories, decent build quality and overall good sound quality make them a good choice in the Andromeda clones camp, though it has to be said that the RevoNext IEMs are probably the better choice if you want something more balanced (despite their V-shaped signature being more apparent).