The Venture Electronics Monk, also known as the VE Monk, achieved an almost cult status among audiophile circles all over the Internet. That happened because of their insane quality/price ratio: at only $5, they delivered impressive performance. The VE Monk Plus improve over their predecessor while keeping the same price, for an even better deal.

Disclaimer: I bought the VE Monk Plus from Massdrop and I paid for them out of my own pocket. Neither VE nor Massdrop are in any way affiliated with this site nor provided any product. You can check out Massdrop’s page for more info. 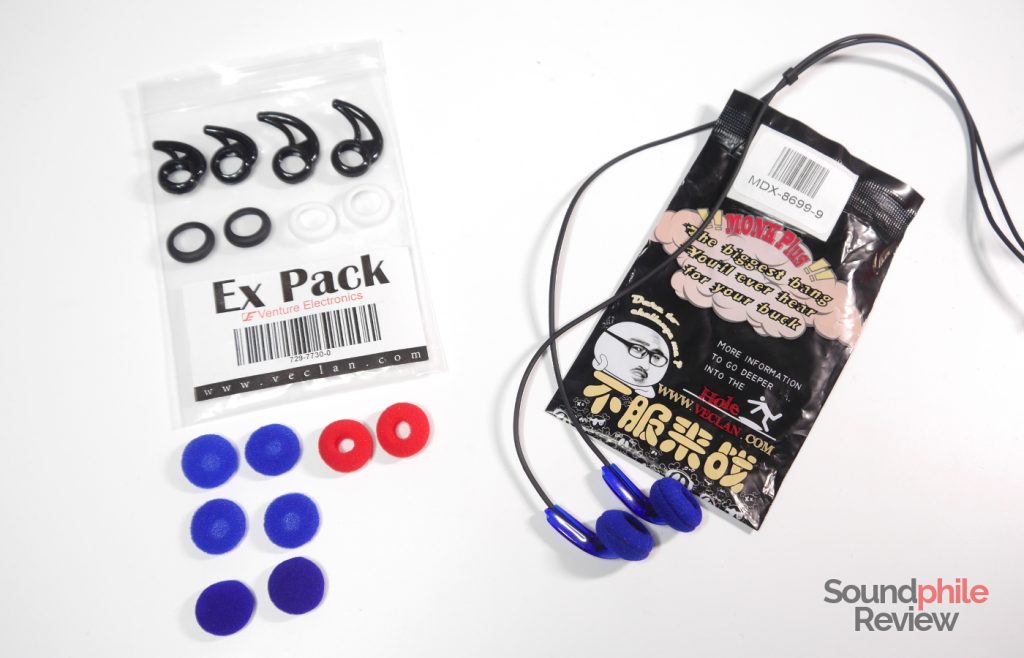 Well, the VE Monk Plus achieved their status both because of their impressive performance and because of their packaging. It’s incredibly simple, being just a plastic bag, but it’s what is printed on it that afforded it its celebrity: it’s a print of the face of Lee, VE’s CEO and mastermind, in a typical Chinese meme (whose name I don’t know). Inside the bag you only find the earbuds.

A bag of accessories can be bought separately; it contains earhooks, silicon rings and various foams. 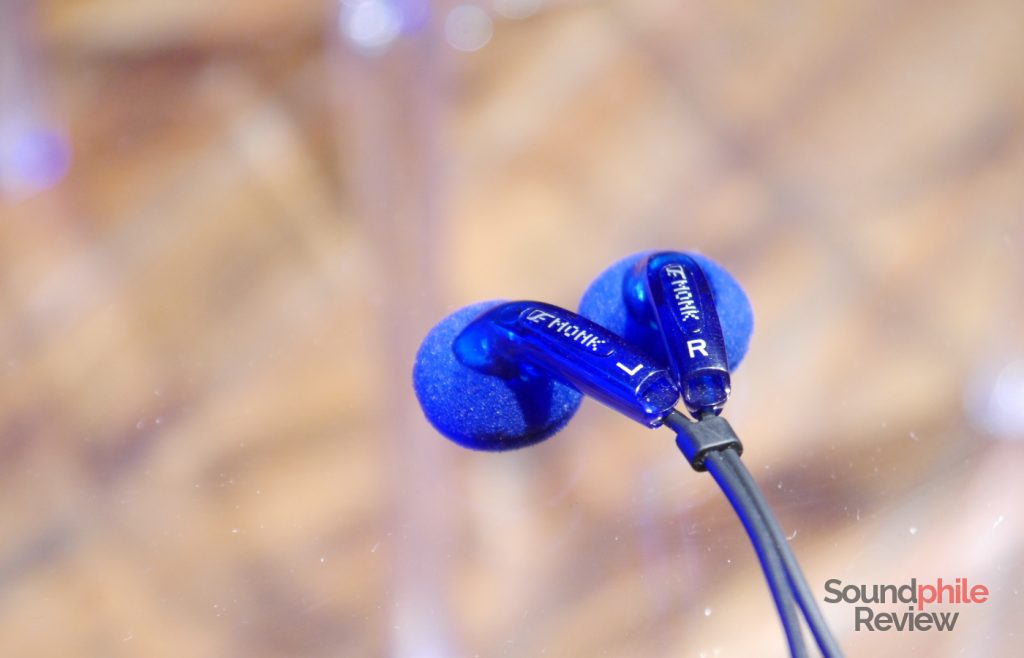 It’s been almost ten years since I last bought a pair of earbuds. I recall it was way back in 2008 and I bought some cheap Creative earbuds – they sounded awfully, but they were all I could afford at that time. It’s a bit odd to listen to (well-sounding) earbuds again in an age dominated by in-ear headphones, but it’s a nice feeling.

The VE Monk Plus are classic in their design, but they also add a few interesting touches of their own – the transparent plastic is a great example in this regard. The internal components are therefore exposed – they kind of remind the old Macs from the ’90s – and this gives them a somewhat vintage look. This fact alone makes the Monk Plus easily recognizable. 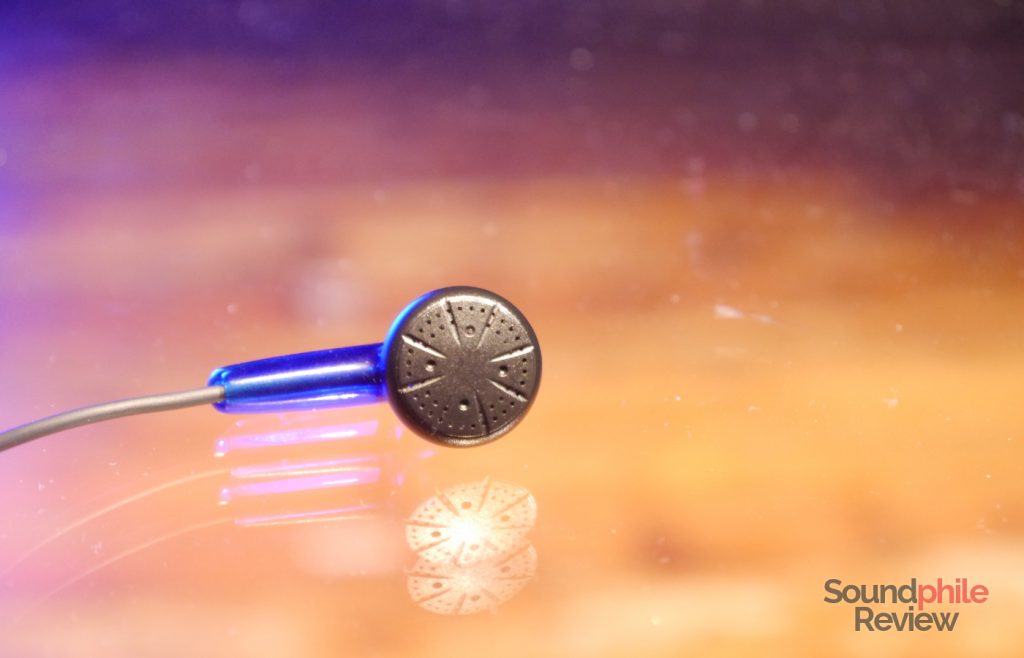 The blue colour is a Massdrop exclusive, so the “normal” earbuds are transparent black. While the housings and strain relief are made of transparent plastic, the part that gets in touch with the ear is matte black.

The cable is covered in black rubber and it is prone enough to kinks and tangling. There’s a slider which helps keep tangling under control, but it doesn’t do wonders.

Using the foams included in the ex pack is almost mandatory, as the hard plastic they are made of tends to quickly cause fatigue on the ears. That is also true for the rubber rings and hooks, as they do not add enough softness. This may be a personal matter, but I read a wide amount of comments on the Internet upholding this impression. 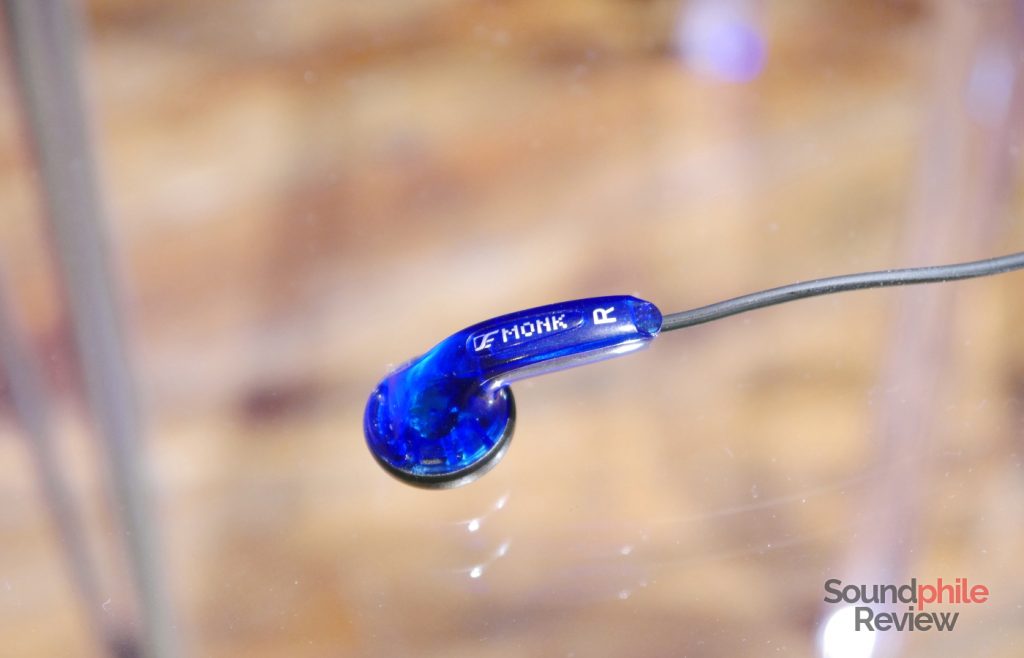 Comfort has proven great once I had started using the foams: after two hours usage I can barely feel any fatigue or stress. Truth be told, I have to say my ears feel much better using the VE Monk Plus instead of in-ear headphones as the ear canal does not become irritated.

As the VE Monk Plus do not completely block the ear canals, isolation is poor. A parallel can be drawn with the open-back cans, like most earbuds; this fact has both pros and cons, since you can’t exclude sounds coming from outside but you also get a wider and airier soundstage. Isolation works both ways, though, so in silent environments (e.g. public libraries) it is not recommended to listen to the Monk Plus, at least not at high volume levels, because of sound leaking outside.

There is a version which also has a remote with microphone on the cord. 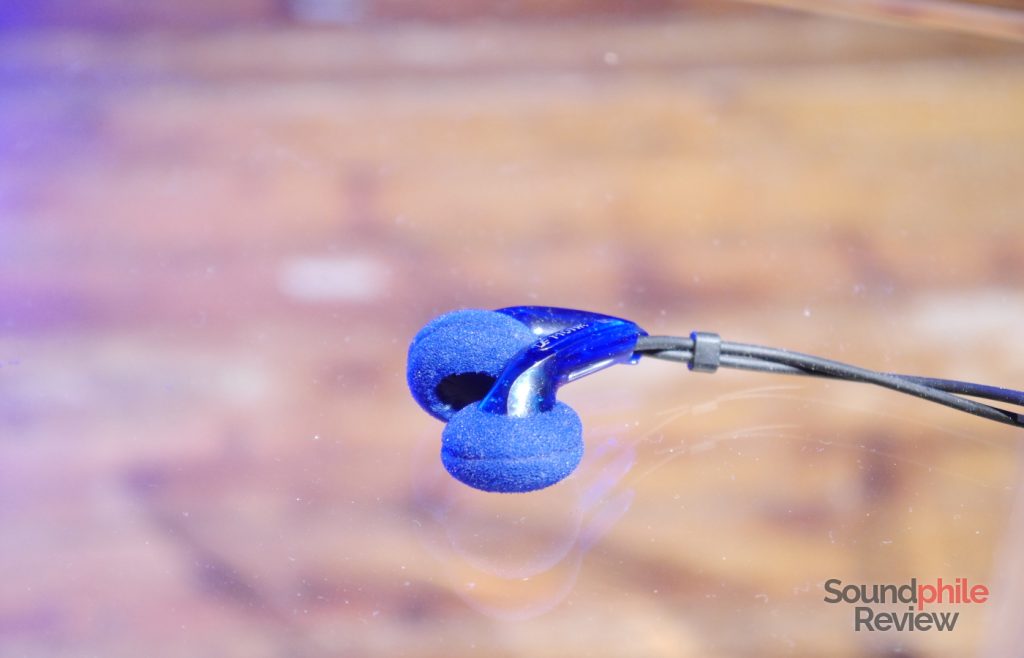 The VE Monk Plus I got were burned in for ~100 hours. Source files were mostly FLACs, although a few MP3s (320kbps) slipped in. The earphones were driven by the Topping D30 > Topping A30 stack, but I also used my Lenovo Vibe Shot Android phone while on the go.

64 Ω impedance means they’re easily powered even by a phone and there is no absolute need for an amplifier – although they perform better when amplified.

Soundstage is impressively wide and spacious, thanks to the open nature of the earbuds. There’s a sense of airiness not commonly found in closed-back in-ear headphones and which more closely reminds the open-back headphondes. Of course the Monk Plus are not really comparable with the latter, but this should give you an idea.

Instrument separation is quite good, too, and it is easy to tell all the different instruments apart.

Frequency response is definitely not flat, although the Monk Plus are natural and musical. Their sound is lively and full, bursting with energy. They’re very entertaining but they also keep good fidelity – they can rightfully be called “audiophile-grade”.

What bass would you expect out of $5 earbuds with an open nature? I expected a light bass, especially given how much isolation matters in in-ear headphones. The Monk Plus deliver rich, rounded bass with a strong presence and good depth, too. It’s not as deep as that of some closed in-ear headphones (i.e. the RHA T20i or the Meze 11 Neo), but it’s more than enough to give it a pleasant body. It has a good texture and it is precise and fast enough, without any spill in the midrange. It’s also got an unexpected kick that makes transients especially notable.

Talking about the midrange, I think it is a bit lacking in the lower mids, but it’s otherwise notable for its clarity and detail. Male voices may lack a bit of depth in my opinion, but this may well boil down to taste. Mids take the center of the stage without being too much upfront. They sound just right as they can be clearly distinguished from the rest, but don’t stand out as much as to overshadow bass or treble.

I bet a lot of effort went into making highs sound the way they do: they’re airy, clear, detailed, rich. Confirming once again the qualities of these earbuds, theere is no significant sibilance. Extension is not as large as in more trebly and also more expensive headphones (i.e. Xiaomi In-Ear Headphones Pro), but it is anyway remarkable and sufficient enough to give the sound that added airiness and openness.

What headphones shall I compare these against? Their price is so low it’s difficult to find other headphones in the same league. Here is therefore a selection of headphones under $100:

There is a writing on the Monk’s plastic bag: “the biggest bang you’ll ever hear for your buck”. I can back that claim without hesitation. The VE Monk Plus have an insane value for the price – and make no mistake: the point is not that they’re cheap, but that they punch way beyond their weight.

What you may have read on the Web is true: these earbuds are cheap *and* also sound well. They’re the perfect entry-level audiophile gear, the ideal earbud to carry with you without worrying too much about it and without compromising on sound quality.

If you have $5 spare, please do yourself a favor and buy a pair. That will probably be the best $5 you will spend in at least a year’s time.

You can buy your pair for $5 on Massdrop (when the drop is active) or on VE’s own website.