The TRN V10 gained quite a bit of popularity upon its release and has been widely discussed online in the last few weeks. This affordable IEM was especially interesting – at least on paper – because of its quad-drive nature, with two dynamic drivers and two balanced armatures. This, coupled with a removable cable with two 0.75 mm pins and a sexy design, fuelled hopes for a great product with low price.

While the TRN V10 is indeed well-built and shows decent technical ability, the manufacturer was not able to tune it properly and ended up making a few mistakes. These are mainly related to the balanced armatures and how they manage treble. While they’re not crippling issues, you better like treble if you plan to buy these headphones, because there’s plenty of it.

Disclaimer: AK Audio provided me with a free sample. You can buy a unit from AK Audio’s AliExpress store. They offer a 10% discount to Soundphile Review using the code “SoundphileReview” (just select “other payment method”, insert the code in the message area and wait for them to adjust the price before paying).

Note: the rating was reduced to 7 on 25 April 2018 due to further listening and thinking on the fairest judgement when also comparing the TRN V10 to other in-ear headphones. 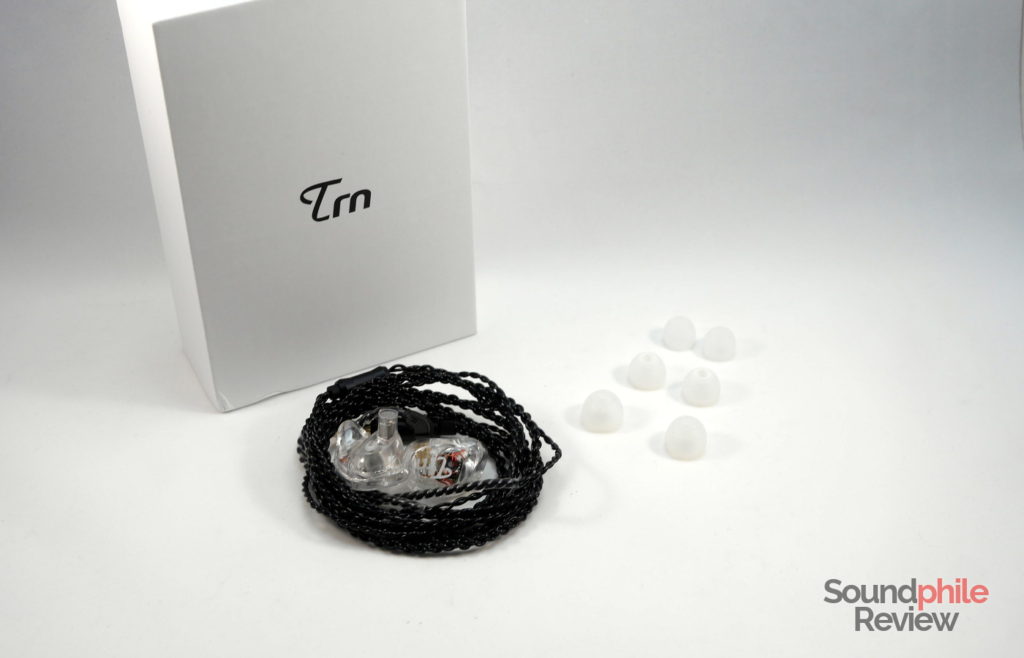 The packaging is pretty bare, with a simple cardboard box that contains the earphones with their cable and a set of eartips in three different sizes. There’s also a manual in Chinese and extremely poor English (“When not in use, always store the headset in the supplied cousin”). Despite the language barrier, the manual contains detailed and useful information on listening volume – it is a well-made guide on how not to damage your hearing. 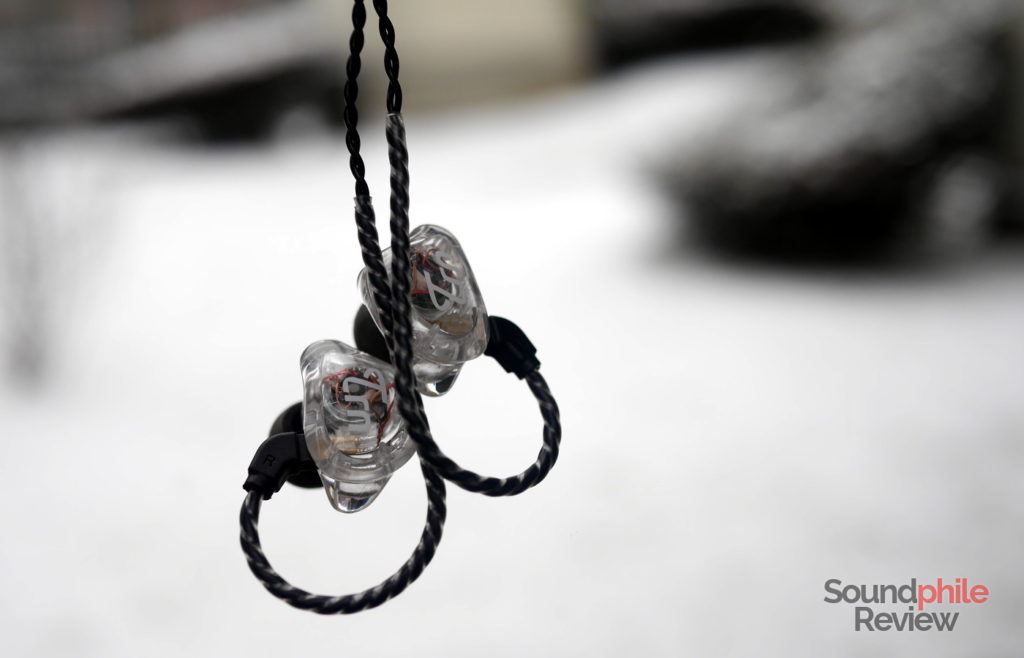 The TRN V10 are definitely striking in their appearance, thanks to the use of transparent plastic that exposes all the innards. That’s a great choice, at least to me! Though the plastic is clear, it is not perfectly transparent in every point – a limit of the industrial moulding production process, I guess. This creates a few spots where the plastic is close to being white and does not allow for a clear view of the inside. There is also an option of transparent black, if you want a look more traditional. 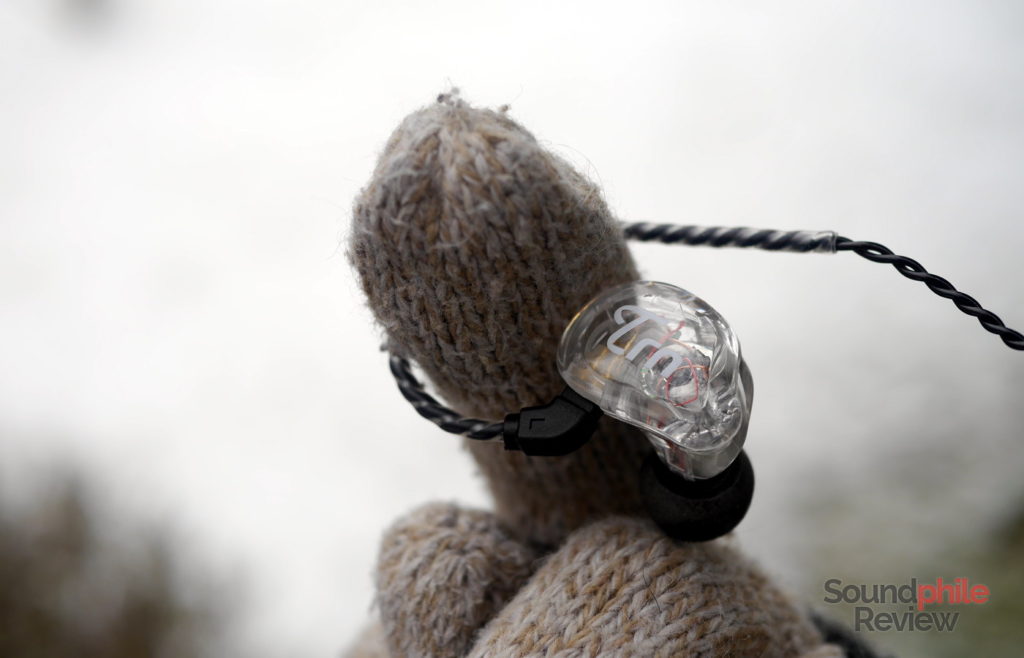 The housings are shaped so that they would (in theory) adapt to the shape of the ear; in this, they are similar to the KZ ZS3. Contrary to those, though, they seem to be oddly shaped and do not adapt as well to my ears. That’s subjective, of course, so you may find it perfect for you. The idea is worth praising, though, as it could make earphones more comfortable to wear for prolonged periods of time.

If you are looking for an isolating headphone, this is not the product for you. Even when using sealing eartips such as the Comply Comfort foams (more on them in my best eartips article!), there is little difference between wearing them and not. They let in a huge amount of ambient noise and they are therefore not best suited to noisy environments – even people talking at normal volume are easily heard. This is a bit of a surprise, given how the TRN V10 have a closed back. 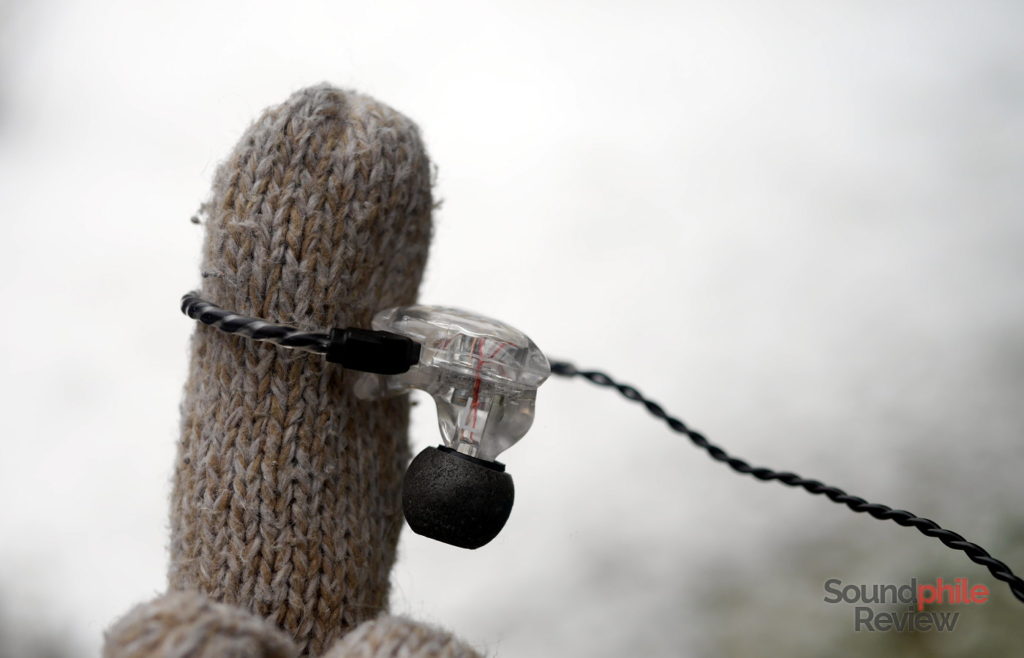 The stock cable is made of two cores per channel, enclosed in black plastic. It is very soft and malleable, but this does not prevent it from being discretely microphonic. There is a built-in plastic ear hook that makes the cable run behind the pinna, but it is so tight that it becomes uncomfortable after a little while. This is the main reason why I often resorted to using the AK Audio 4-Core 7N copper cable while testing the TRN V10.

One thing I have to note is the fact that the pin sockets to connect the cables are extremely tight and make insertion and removal difficult. It takes a fair amount of force to get the cables in or out and it always seems to me like the earpiece or the cable is going to break under the pressure. It is nothing serious and this may be an issue with my unit, but if that is the case, it highlights how TRN could improve their quality control.

Due to the cable and the odd shape, comfort is not the best – at least in my experience. If I insert the earpieces making them fit the way they should, tightly inserted and completely inside the pinnae, they start to become uncomfortable after half an hour. Leaving them a little looser makes it possible to me to wear them for an hour or so before feeling discomfort, though the cable then kicks in. As it applies pressure on the outer pinna, right where the legs of my glasses usually sit, it soon starts taking its toll and gets uncomfortable and awkward. This is all subjective, so take this description with a pinch of salt.

I used a variety of sources to test the TRN V10, after running 100 hours burn-in. Among them are the Topping DX7, the iFi nano iDSD Black Label, the Topping NX4 DSD, the RHA Dacamp L1, the Cayin N5ii, the Hidizs AP200 and a Head ‘n’ Hifi Objective2 fed by a Topping D30. Source files were mostly standard-res FLACs, though there were also a few hi-res files and 320 kbps MP3s too.

The TRN V10 would be mostly neutral and well-balanced, if it hadn’t added emphasis on treble that makes it a bit tinny and even harsh sometimes. I find it to have a (subjectively) overall pleasant tuning, though it lacks technical ability that prevent it from being a true “cheap champion”. This is despite the presence of two dynamic drivers (6 mm and 11 mm) and two balanced armatures for each earpiece.

Soundstage and imaging are underwhelming; the music always feels like it comes from inside your head, instead of coming from all around you. As an example, in Mayhem’s A Bloodsword and a Colder Sun Part I Attila’s voice can not always be precisely positioned in space, nor comes from far as it should. It’s a rather confined and closed sound, despite its focus on treble. On the other hand, instrument separation is average and does not disappoint.

Bass is as you would expect out of an IEM in this price range – it is neither deep nor very fast. It’s certainly fun, as it reaches deep enough to add a bit of punch to music, but it won’t blow you away with sub-bass extension nor with blistering fast transient response. In fact it reaches down to 50 Hz and then steeply falls down. The big pro of the TRN V10’s bass is the fact that it is neutral and tonally accurate, so it will provide just the right amount to make the music sound full and alive, but it won’t cross the line and add colouration to the record. Listening to Massive Attack’s Angel you can hear that bass is there and it packs a punch, but it’s a bit slow (so it doesn’t portray every small variation and lacks impact) and it reaches noticeably not as deep as other headphones do. All in all it’s a pretty impressive performance, anyway.

Midrange appears to be on the same level as the lows, thus achieving a good sense of balance and making music feel natural enough in terms of tone. Contrary to bass, mids have good impact and speed, but on the other hand they seem to be lacking in detail. Midrange sounds overall flat and a bit dull, lacking vitality and engagement; guitars and pianos (and voices, too) are not alive. If you pardon my misuse of language, they don’t feel there, but they seem like behind a veil that lets you know they are present, but doesn’t allow you to truly see them. This makes the midrange nor as engaging and lifelike as one would wish.

Treble comes out as very prominent in the mix, especially in the ~9 kHz area, and this gives the mix a bit of a bright and sparkling tone. It is emphasised and can be a bit piercing at times, especially with recordings that place themselves an emphasis on these frequencies, but it is not as prominent and spiky as the RHA CL1 Ceramic. It can be annoying, even if you like trebly or bright signatures. The result is that there’s sibilance all over the place and instruments and sounds that reach high frequencies (e.g. violins, hands clapping) are a bit hard on the ears. Detail is only average and does not allow you to hear every small nuance.

Due to their balanced lows and mids, the TRN V10 could – in theory, at least – be great for any genre; reality, though, is that treble bars them from being pleasant with genres where there is a lot going on in that part of the spectrum – as an example, electronic music is often rich in highs, and so is jazz. Without any equalisation, the V10 can be uncomfortable for some. After equalising the treble, they are a good all-rounder.

I would like to compare the TRN V10 to these headphones:

To me, the TRN V10 were quite a surprise both in a good sense and in a bad sense – if we take out the spiky treble, it’s a very well balanced and likeable product, but it is not as technically capable as some other headphones out there. It gets the basics just right and can be a good starting point or a “daily workhorse” you can bring about knowing you will get good enough sound without much expense.

It has a few flaws, such as isolation being close to null and comfort not being the best in class, but I do not deem them major issues. I struggle to find any damning issues, especially given how the TRN V10 retail for $35. All in all, it’s a decent product that gets the job done nicely if you can put up with its treble (e.g. equalizing it out).

If you like trebly sound and don’t care too much over technical skills, they’re a decent product in the budget area – I can understand why they get so much love from a part of the community.