Tin HiFi’s T2 was launched a couple of years ago and it has been a best-seller since then thanks to its great mix of design, comfort, sound signature and technical ability. Despite their low price, they’re quite valuable. The company is now trying to repeat this sucess the Tin HiFi T2 Plus, a successor to the old model that appears to change a few things in pursuit of improvement.

Disclaimer: I received this unit from Linsoul for free. As of the writing of this review, the T2 Plus has a price of $49.

Tin HiFi uses a well-defined style of packaging: an outer cardboard box holding another box made of heavy cardboard and covered in some leather-like material (which appears to be specially treated paper, but don’t quote me on that). This rich presentation continues when opening this second box, as it contains a tray with the two earpieces, under which are some plastic bags that hold the cable and the eartips (three pairs of silicone, one of foam). Considering the price it’s a great packaging, the only thing missing being a case or bag. 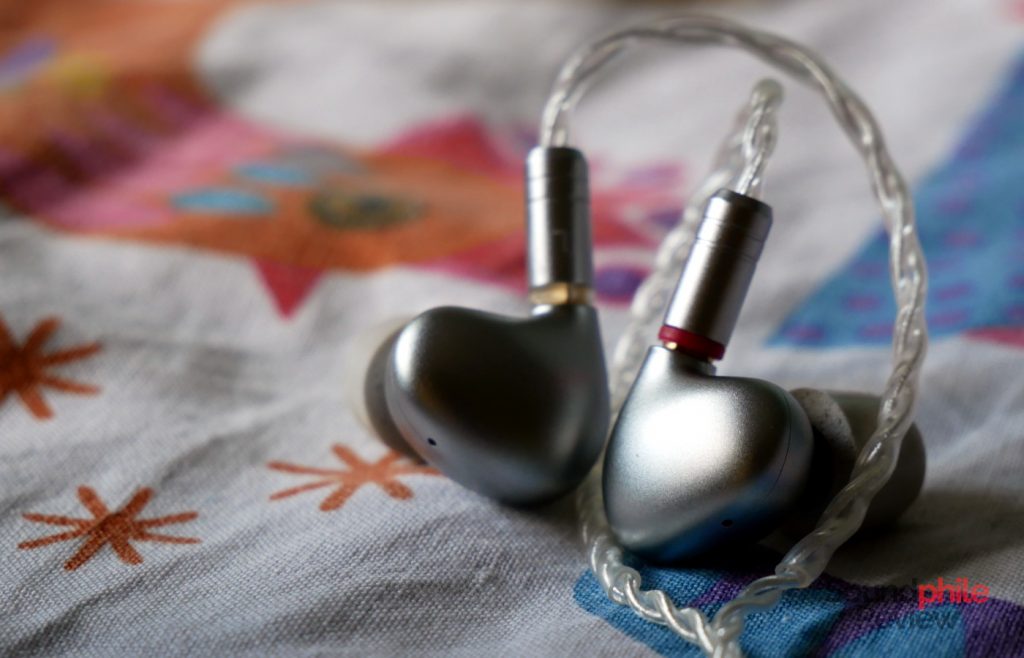 The design of the Tin HiFi T2 Plus somewhat reminds me of the BGVP DMG – and the fit as well. It’s quite a large departure from the other Tin HiFi designs, even the recent T4. It’s more akin to that of many other earphones on the market with over-ear cable fit: the RHA T20i, the BLON BL-05, the various Andromeda-like earphones… It is unique in the sense that it’s plain metal, without any etching or edge; it’s all round and almost organic. 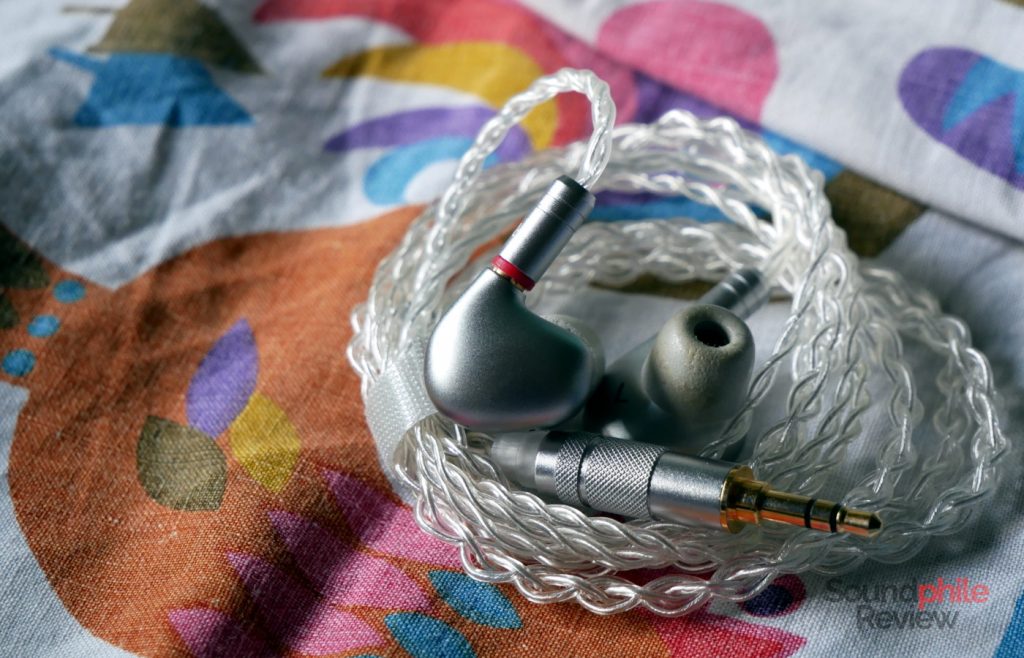 The T2 Plus are built quite well, with the shell being made of two pieces with the seams almost invisible. As they are made of metal and they’re made of just two pieces, they feel quite robust. I found it weird at first that the surface is completely clean and devoid of any markings, something that makes the T2 Plus look equally odd (as I’m quite used to see brand markings everywhere, so their absence is more notable than their presence at this point) and very polished and attractive. 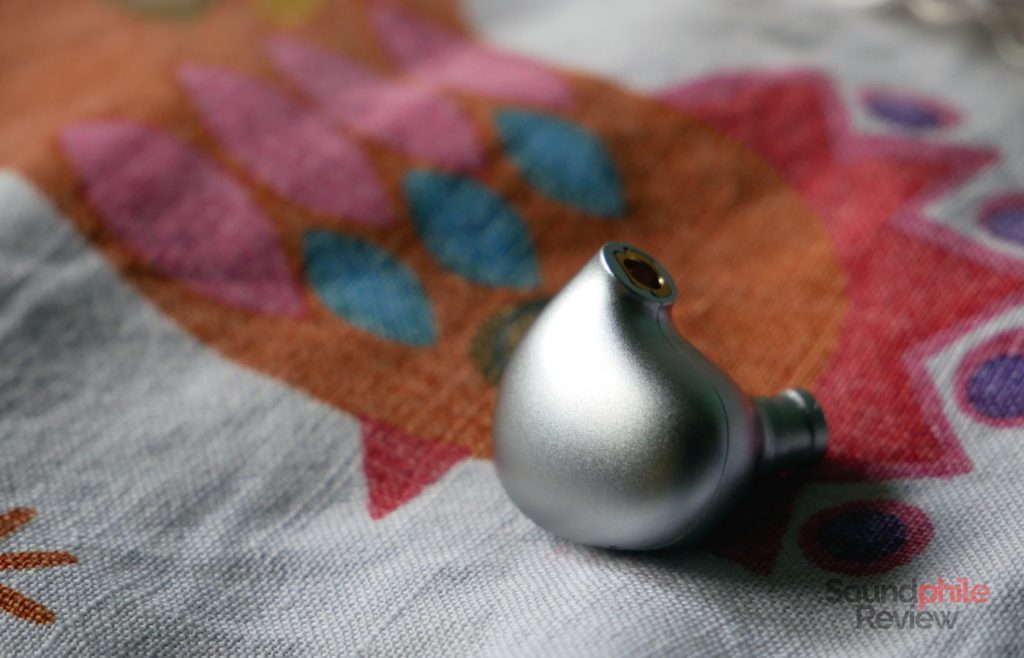 As the general shape is what I’d call “tried and true” (I mean, it’s not innovative by any stretch of the word), it also confirms once again that this kind of design is really comfortable. I can wear the earphones for hours and they never become uncomfortable or irritating. Now your experience might be different as the shape of ears changes from person to person, but I think that you should have no problem at all if you don’t have any very unusual stuff going on in your ears.

Isolation is barely sufficient: even using foam eartips, which usually allow the best isolation, I can always hear what’s around me clearly. When walking around the streets I can clearly hear the traffic and people around me, so any noisy situation is probably not ideal for the T2 Plus. 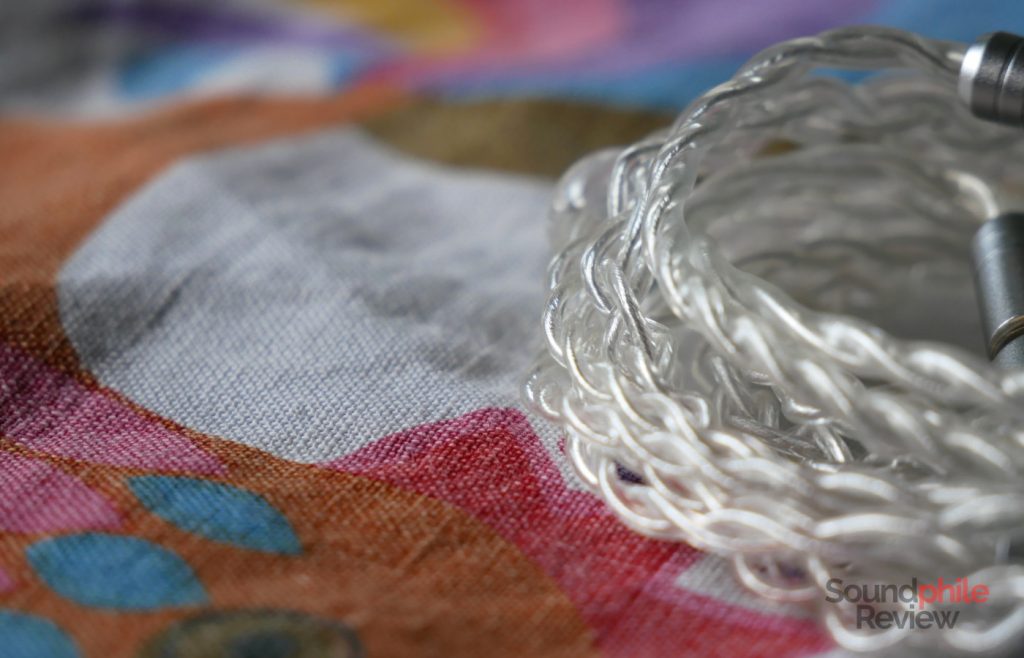 The cable is quite nice: it’s a definite improvement over that of the T3 and the T4, as it is quite malleable and soft; it has four silver-plated cores, two per channel, each covered in a thin plastic wrap. It also has little microphonics, which is quite nice. Overall it’s a great cable, considering the price of the earphones.

I tested the Tin HiFi T2 Plus driving them with an iFi nano iDSD BL and a Shanling M2X. In both cases source files were predominantly FLACs in 16 bit, 44.1 kHz resolution.

The Tin HiFi T2 Plus mostly keep the manufacturer’s traditional tuning approach which privileges upper midrange and treble and makes bass reserved, complementing it all with good technicalities. From a general perspective, my first impression was that the T2 Plus appear quite similar to the T2, but I relied on my memory – if you want to know how they compare, you can find a detailed comparison below. The single dynamic driver inside the shells is easy to drive. The T2 Plus are highly dynamic and physical across the whole spectrum, with transients being immediate and well-controlled.

The soundstage appears quite large; though not expansive, it definitely does have quite a bit of space there, extending to the left and to the right and presenting the listener with some space on front, too. Hey, it’s not like the real thing, but for $50 that’s gorgeous – and in fact it’s so good it trumps headphones I’ve heard costing three times the price. Imaging is also quite good as there is a good separation between left, centre and right; the positioning of instruments isn’t superbly accurate, but it’s honestly enough to have a clear idea of where the instrument is sitting (or standing, or laying, or whatever that is. What’s the best word for pianos? Let’s say they are pianoing on the stage and settle the matter once and for all). Back to more serious stuff, instrument separation is quite good as well, with all instruments being correctly separated and audible even in moderately complex tracks; one such track is the very fine The Woods of Old Limerick / McGreavy’s / Meghan’s Reel / The Piper on Horseback by the wonderful Shantalla.

Bass is what I would describe as “accurate”, or more precisely “at least as most accurate as budget options are able to deliver”. It’s not perfect, with the lowest end being barely there and with a more prominent bump in the mid-bass area, but it’s really close to what I consider neutral. In other words no, it won’t rock your socks off, sorry. But it’s plenty enjoyable: it has a fast attack and a moderately fast decay which translate in satisfying drum beats – those sound fast, impactful and decently physical even. The mid-bass emphasis means tracks that privilege the lowest area (I’m looking right at you, Angel by Massive Attack) do not have that oomph and involvement they would otherwise have. There’s a good level of detail in the bass as well as good layering.

Midrange has the usual emphasis on the upper area, a fact that entails a better reproduction (or, to be more accurate, a preference) these earphones have towards high-pitched instruments, be it violins, female voices or even bagpipes. In the wonderful, wonderful track that goes by the name of The Blantyre Explosion (by those fine people at Shantalla, again) you can clearly hear this as the singer’s voice is more sibilant and skewed towards the upper area. You can hear this with other instruments such as violins as well (e.g. Gaia Cuatro’s Visions of Time). It’s not fatiguing nor excessive, but it’s noticeable and therefore not everyone will like it. The detail is quite good, with some hints of micro-details as well which really elevate the listening experience to a higher level.

Treble has the typical Tin HiFi sound: a modest emphasis on the lower area with a slow fall as the frequency goes up. This translates to a good extension, and at the same time to treble being mostly where it should be; it seems not to be overstated and exaggerated, so much so that I’m tempted to say it’s actually mostly out of the way and only people who are extremely sensitive to treble will find it to be a problem. It’s also quite well detailed and there are even some nice micro-details. It’s really a pleasure to listen to it, as it’s open, airy and spacious, also lending most of these qualities to the signature as a whole. It’s light and enjoyable – as it should be, in my opinion.

Here is a comparison to other popular earphones:

How do you reinvent a masterpiece? The original Tin HiFi T2 is still one of the best in-ear headphones under $100 to these days, despite the crazy level of improvement and evolution of the market in the past three years. The Tin HiFi T2 Plus represent an improvement over their predecessors in terms of comfort, that’s for sure. But they are their own thing, one that offers a pleasant signature paired up with very good technical ability.

If you like Tin HiFi’s house sound, which makes the upper midrange area and the lower treble more prominent without overdoing them, then the T2 Plus will surely appeal to you with their great performance. If you don’t, they’re still great earphones for the more analytical listening sessions. I think the T2 Plus are great at less than $60, with very few earphones being able to compete even when moving up to $75 (which is a 50% increase in price!) and even beyond. They are that good from an acoustic standpoint and they also take out the main criticisms against the original T2, which were comfort and cable. In short: you should go buy them and listen how good they are yourself.