After the very successful launch of the T2, every earphone made by Tin HiFi has generated a lot of hype. Their first planar earphones, the P1,  garnered a lot of attention but then didn’t fare too well in time: their peculiar tuning was admittedly not for everyone and after the initial excitement it quickly faded away, despite being among the best planar IEMs out there to this day. So the company went back to the drawing board and reimagined their planar design, building a new one from the ground up. The Tin HiFi P2 offer a completely new design, a completely new planar driver and a completely new sound signature. All this newness results in a very pleasant experience which is perfectly in line with expectations.

Disclaimer: I received a complimentary unit from Linsoul for the purpose of this review. The P2 retail for around $340. 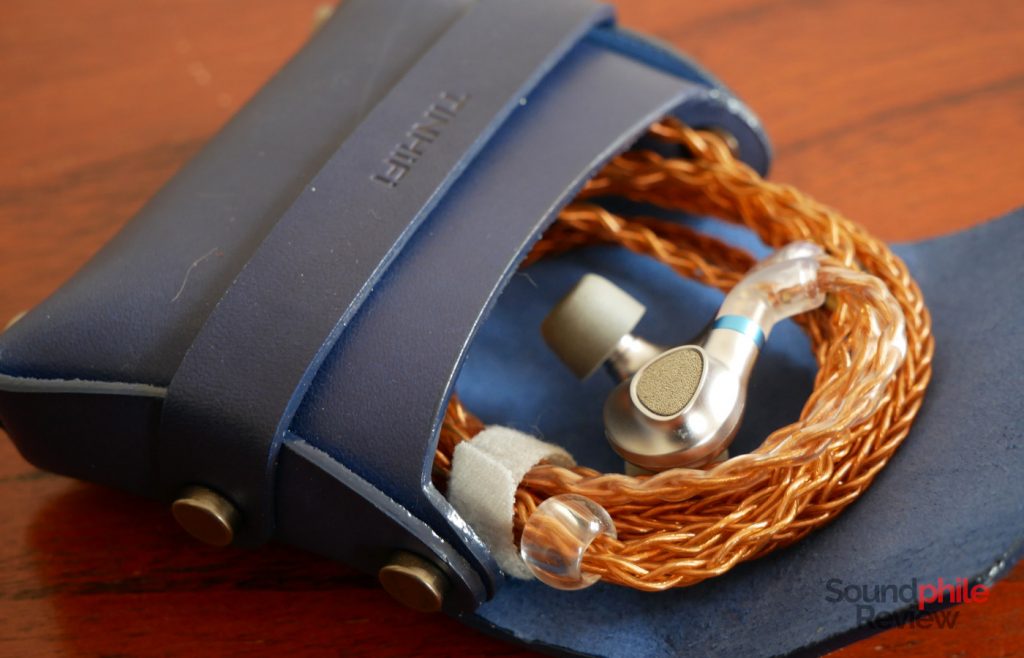 I took a look at packaging in this Out of the Box article, and as you can see it’s quite the complete set of accessories. I especially liked the inclusion of a 2.5 mm balanced cable in the box with the two adapters to 3.5 mm and 4.4 mm, as it lends you a lot of flexibility and choice of sources. 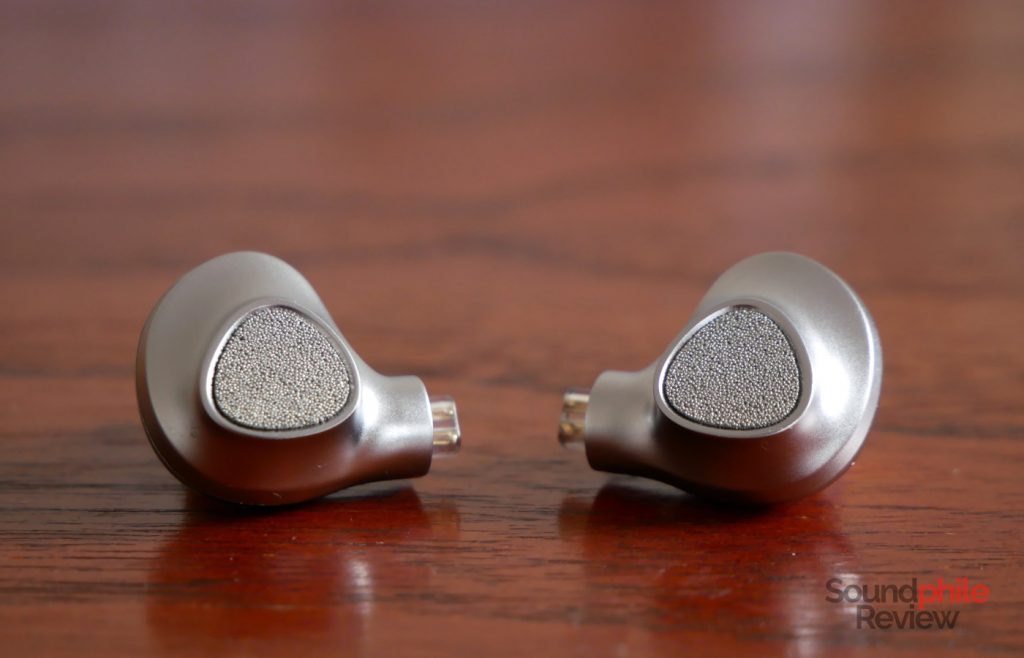 The Tin HiFi P2 offer quite a change in design compared to previous products: the shape is triangular, but with large curves that make it harmonious. The faceplate is raised and it appears to have a grainy texture, almost like sandpaper, although it’s actually almost smooth to the touch. On a closer look, it seems like there are hundreds of small metal spheres fused to each other – it’s really beautiful. The shells are relatively small and just a bit larger than the P1’s. 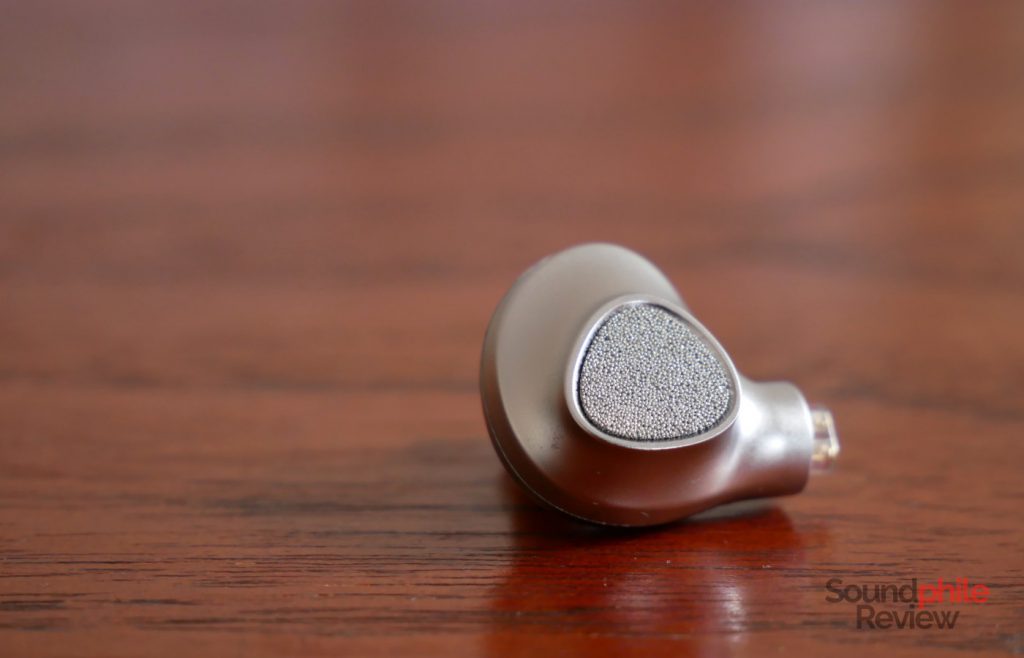 The metal is smooth but not polished, so it doesn’t have a mirror-like surface; it’s also very smooth to the touch, so much so that it’s almost pleasant to touch. On a more serious note, build quality appears to be quite great, with very small seams at the junction between the two pieces that make the shells. My only complaint here is the choice of the 2-pin connector: although it is very welcome on its own, the female part on the earpieces is protruding and fits inside the cable, as it happens e.g. on the BLON BL-03. This restricts compatibility with cables and also poses further risks of breaking down the connector. 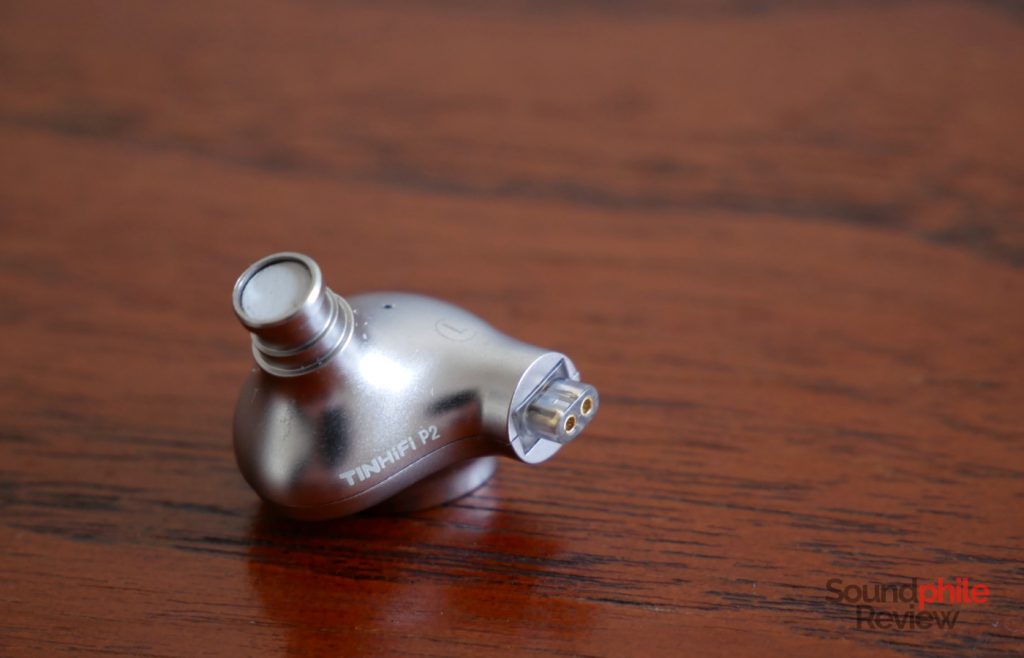 There is a single hole on the side that faces the ear, so it seems like this is at least a partially vented design. In fact isolation is good, but not great – not as good as I would expect from an all-metal build of this type, even when wearing foam eartips. I can easily isolate myself in my own room, where the loudest sound I can hear is a car passing by in the street, but actually being in the street walking I can hear most of what’s around me. 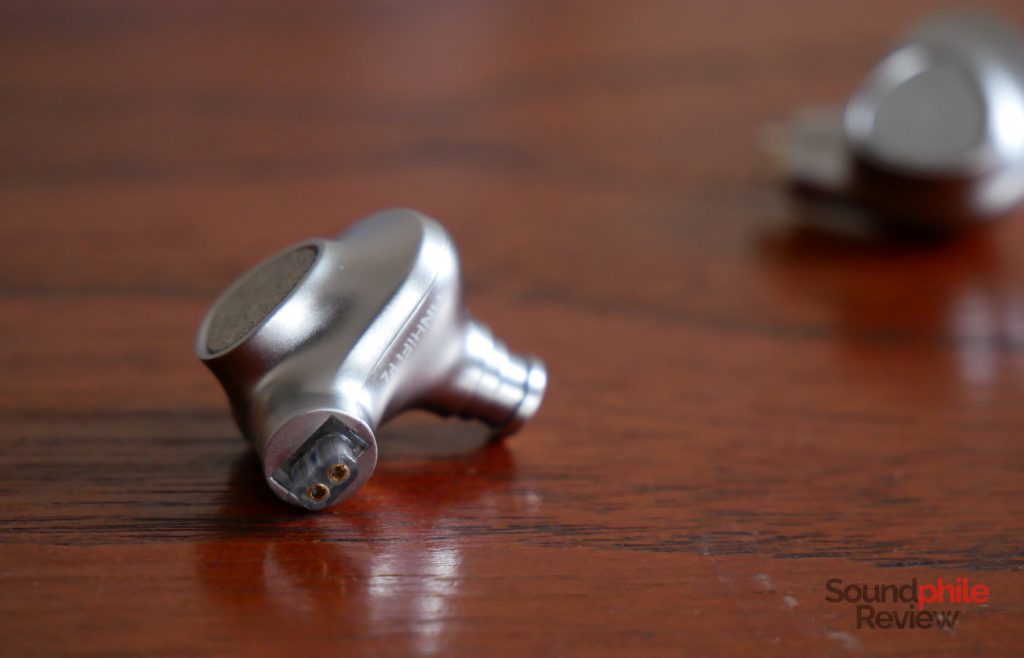 Thanks to the curved shapes and to the relatively small size, comfort is quite great. I can wear the P2 for more than two hours without even feeling that I have them on. That’s quite great honestly and it means one can probably wear them for the whole day with minor fatigue. This is of course just an indication, as your ears are probably different from mine – unless you are my clone, in which case we might have an issue (although, if you are my clone, you can work tomorrow and I’ll take a nap, then we’ll switch places. Let’s take advantage of this.). 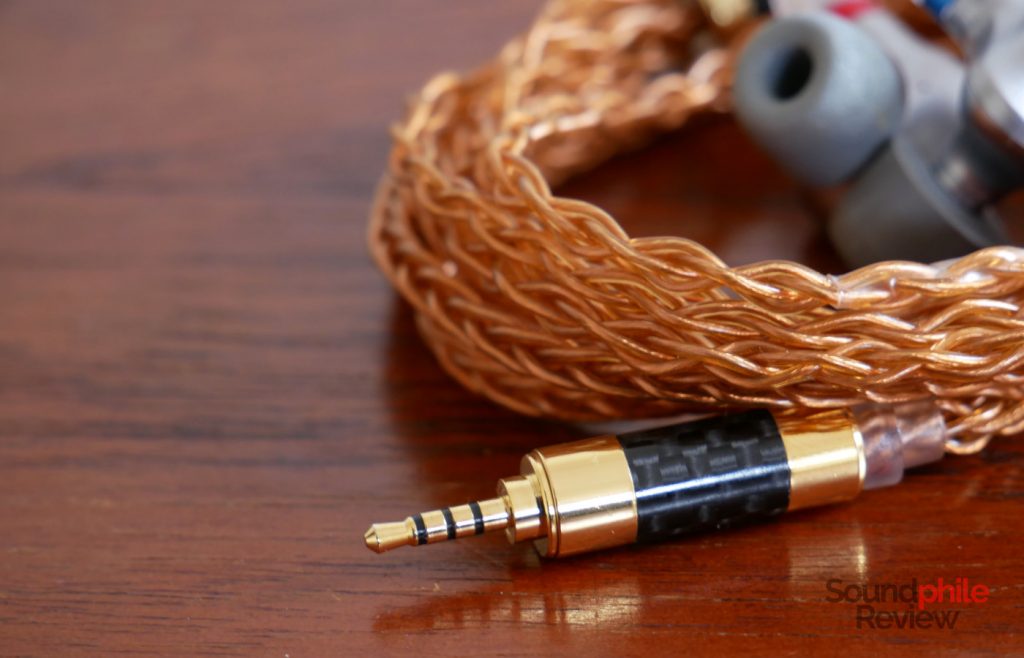 Tin HiFi provided the P2 with an eight-core cable with a circular braid that feels good and in line with what I would expect from a ~$300 product; it’s relatively soft, though my unit has a few kinks from being stored in the packaging box. It also comes with a Velcro strap to keep it tidy once you put it away (although I don’t find that really necessary with the included case). The cable of the P2 marks quite a large change compared to previous products: it uses the 2-pin connector instead of the MMCX one used before, which is a welcome news in terms of reliability but it also means that the cable is not free to turn. The other noticeable change is the orange colour, which I actually don’t like too much: it seems fake! It’s in fact made of copper (apparently it’s 6C single-crystal copper) and kevlar, coated in PVC – I don’t know if the colour comes from the copper itself or from the PVC coating.

I spent most of my time trying out the P2 using a Topping DX7 feeding a Drop THX AAA 789.

Despite being in-ear headphones, the Tin HiFi P2 require quite a bit of power to drive them to high volume levels. The sensitivity of the 12 mm diaphragm is just 90 dB, which is among the lowest I’ve seen for IEMs, but impedance is relatively low at 32 Ω. This means that you’ll need just ~10 mW to take the P2 to 100 dB, which is already an extremely high volume. Some people like to listen at volumes around 85-90 dB, though, and in those cases transients may get well over 100 dB so more power is needed – a lot more, in fact, if we get to very high volumes: to reach 110 dB you need 100 mW, 115 dB require 316 mW and 120 require an exorbitant 1,0001 mW, so one full watt! It should be noted, however, that Tin HiFi rates the maximum power at 10 mW, so the P2 are not made for you to listen at eardrum-shattering volume levels. This also means that practically any device will be able to provide the necessary voltage and current; a DAP or a dedicated DAC and amp would be beneficial only if you plan to go beyond the rated specs (which is not really recommended anyway).

Soundstage is moderately wide, so there is a god lateral extension and space appears to open on the sides of the listener, but there’s almost no depth. Imaging offers a sense of location that’s not pinpoint-like, but it’s still quite precise; it also struggles placing instruments in the centre, and even when it does they sound inside my head instead of giving me the illusion the instruments are in front of me. Instrument separation is generally good, but it takes a dive when the track has a lot of bass in it as everything becomes muddier.

Tin HiFi shied away from its usual tuning philosophy and adopted what many would deem a more appealing signature for the P2. Instead of the usual mid-centric approach with some brightness, the company chose a more traditional U-shaped signature that emphasises bass and treble. I honestly preferred the previous tuning philosophy as it was original and different from the vast mass of earphones sporting this tuning.

Bass is abundant and lends a good chunk of warmth to the sound. Well, that’s a bit of an understatement there – it’s not the nice warmth of your house when you come back inside in a freezing winter, it’s more like a big bonfire a couple of metres from you. It’s an emphasis that’s unmistakably there and you can’t not notice. It’s mostly concentrated in the lower mid-bass area, even though the deepest notes are actually quite well presented as the driver reaches down to 20 Hz with ease. In fact it’s a very organic and coherent presentation. Speed is decent, but limited and accompanied by moderate physicality and detail that I would deem average for the price range. The thing I didn’t really like is the fact that bass tends to be a bit overwhelming and to leak over mids when the track already has it in abundance; this leads to a loss of clarity and to a muddied-up presentation that loses enjoyability.

Midrange is relatively recessed, but not so much as to appear distant. It is really warm and this, paired with bass being emphasised, means that the mids are often perceived as muddy and lacking clarity when the track already has a relatively large bass presence; this is especially true with instruments such as pianos and male voices, which occupy the lower area. As a good example you can use Pajaros by Gaia Cuatro: the piano is often overshadowed by the double bass and the drums. The upper region has a bit of emphasis as well and this makes the violins in that track stand out despite the muddiness in the lower section. Now the issue here is that this tuning is neither flesh nor fowl, and ends up being a bit of a mess. Detail is decent, but limited, just like physicality – drums do not convey that sensation of a hit that would make them sound closer to the real thing.

Treble is well extended and, well, it turns out it’s too extended. In fact the upmost frequencies from 15 kHz are heavily emphasised, leading to the overall signature being fatiguing and hissing. There is in fact abundance of sharpness, to the point that I have to listen to the P2 at an especially low volume to avoid headaches (but this might, of course, be an issue of mine). It’s not constant so I don’t notice this shrillness in every track, but when it kicks in it’s quite noticeable – as an example, I notice it in Massive Attack’s Risingson. This is why I deem it fatiguing and I don’t go as far as to call it “unlistenable”. In all other respects, treble is actually enjoyable: it has a good amount of detail that makes cymbals pop out in a very good way.

As the only other planar in-ear I’ve got is the P1, I’m gonna also compare the Tin HiFi P2 to non-planar earphones:

The Tin HiFi P2 would be quite a decent product, with a warm signature that’s highly likeable. Tin HiFi also got the design right, as it is both good-looking and comfortable. In terms of packaging and accessories it’s top notch, too. But there’s an issue with the P2 and that is the tuning: it’s really generic, even though this is not necessarily a bad thing, but most importantly it has super-high frequencies that are excessive and that make the signature as a whole fatiguing. In every other respect I feel like the P2 are a good product, even though not exactly competitive at their price, but the piercing treble breaks the deal for me.

If you can hear above 15 kHz, you can probably feel quite fatigued by the P2. They require quite a bit of equalisation to sound right, plus their issues with bass require some intervention as well in my opinion. They’re not what Tin HiFi has got us accustomed to. This is the most subjective part as you may indeed like this sound signature, but I find that it’s not as well executed as it should be – not at this price, at least. To put things into perspective, you can get the Meze 99 Classics for this sum and they’re on another planet entirely from all points of view. So my advice is to actually look for something else unless you are 100% sure that the type of sound I described is what you are after. With all the hype that’s out there, the risk is to be let down.