The Meze 99 Classics is the top-of-the-line product from Romanian manufacturer Meze (pronounced may-zay). Founded by Antonio Meze, the company gained its recent, larger notoriety thanks to these headphones – and there’s good reason why.

Not only are the Meze 99 Classics well-built and sporting an original design which sets them apart from most other products, but they also have great sonic performance. Their lush, warm sound signature is a real treat for your ears.

You can also take a look at my Headphones In Pictures article for additional pictures and information!

Disclaimer: Meze sent me a free review unit in 2016 when they launched it. The headphones stayed with me and I kept using them. Please have a look at Meze’s website for official specs. 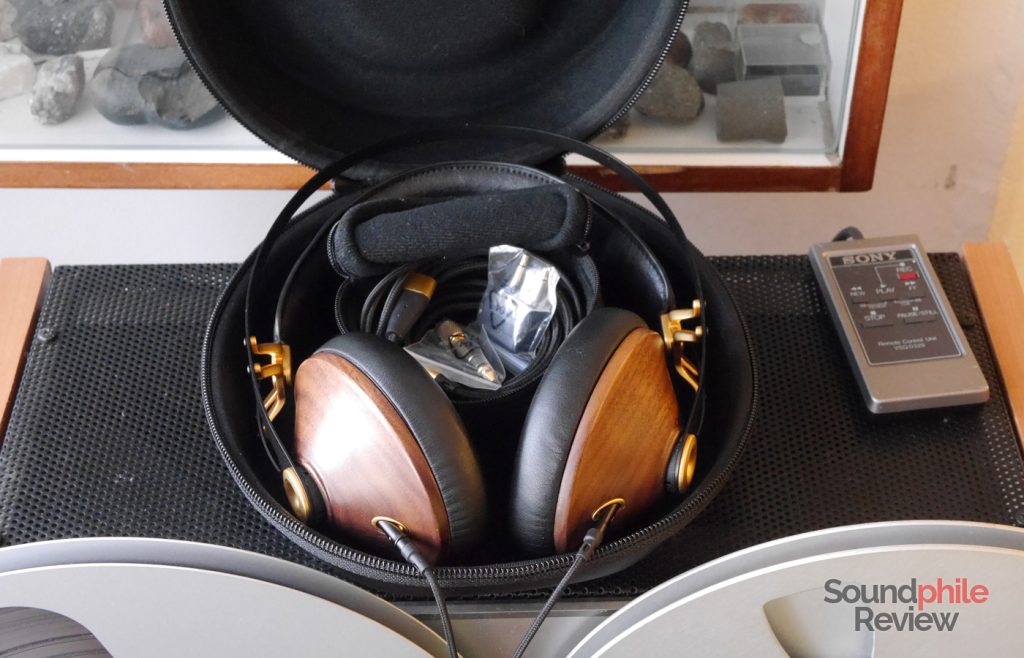 Meze did not spare any expense when making the packaging: the box is made of solid, thick cardboard and it is full of informative text. Inside it is a hard carrying case holding the headphones, two cables, an aeroplane adapter and a 3.5 mm to 6.3 mm adapter.

The carrying case is hard and covered in faux leather on the outside and in fabric on the inside; it is sized so that the headphones fit just right. A small pouch holds the two cables and the two adapters. The cables are made with different use cases in mind: there is a short (1.2 m) one with TRRS connector and a remote and microphone on it, so that one can use the 99 Classics with a mobile phone; the other one has a TRS connector and is 3 m long. In both cases there is a 3.5 mm jack on one end and two 3.5 mm jacks on the other, though the latter are especially designed to be slim and fit into the headphones. The cables are braided. 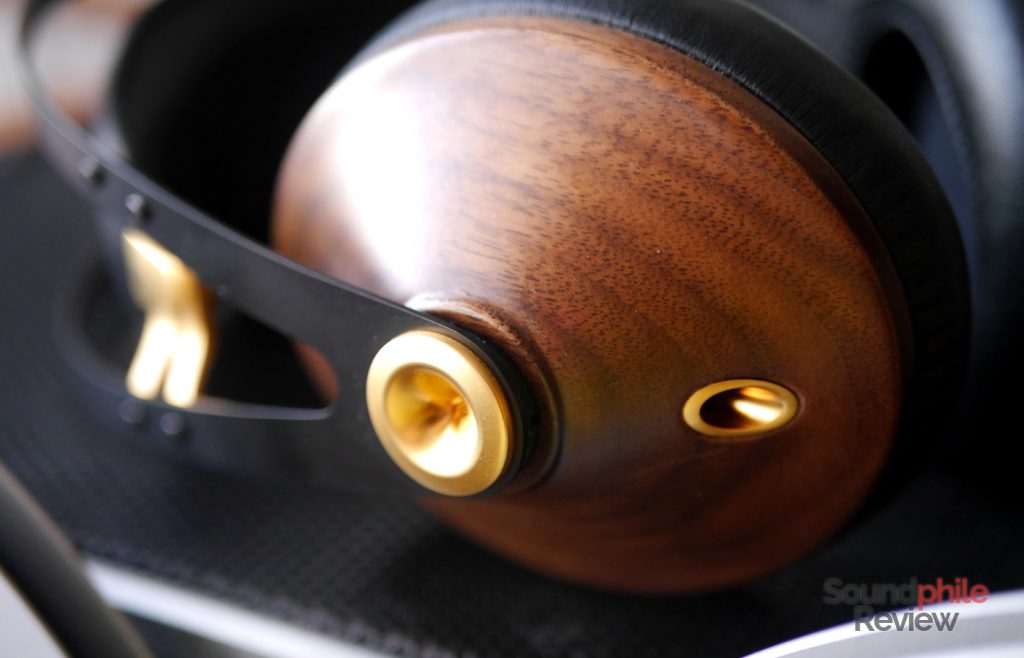 What stroke me when I opened the box for the first time was that the earcups are made of real wood. Each cup is made from a single solid piece of walnut wood carved to size and shape, and therefore each cup has unique colours and grain. It gives the design a certain warmth that, coupled with the gold accents, make the Meze 99 Classics look like a timeless headphone. It has to be noted that another edition with silvery accents is available. 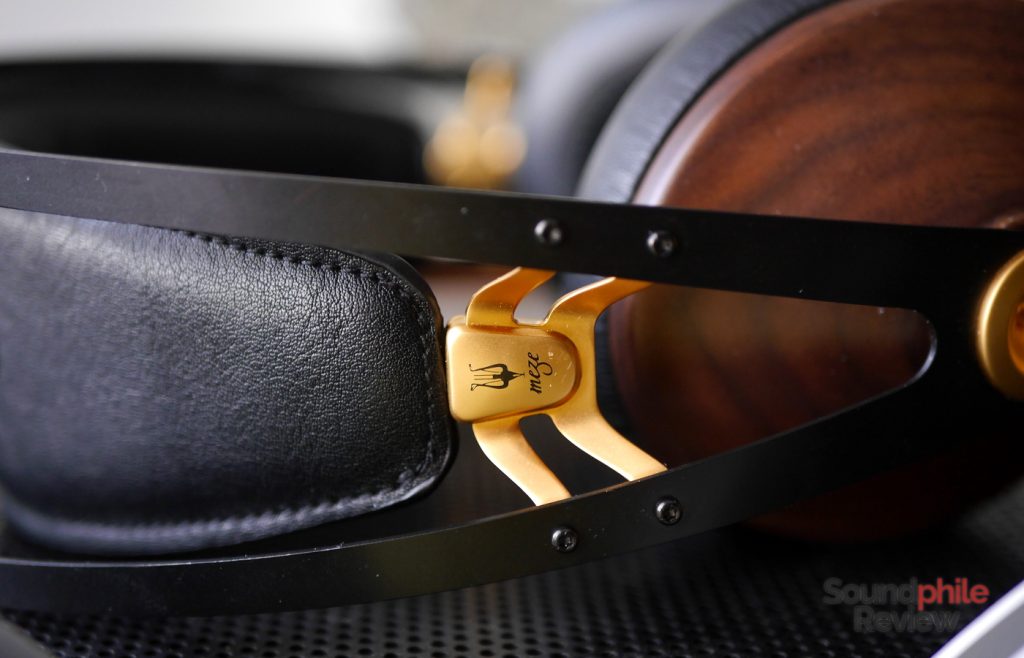 Meze opted for a suspended headband design and delivered it using two arches that go from one cup to the other, reaching the maximum distance at the top and uniting at the extremes. The headband is tied to the body using rubber bands, so there’s no adjusting needed. A small detail I noticed is the headband being narrower than the metal structure. This means that the heabdand won’t sustain the headphones when they are laying flat on a surface and it will supposedly last longer (as an example of the opposite, the HiFiMAN HE-560 has a headband that’s larger than the metal structure). 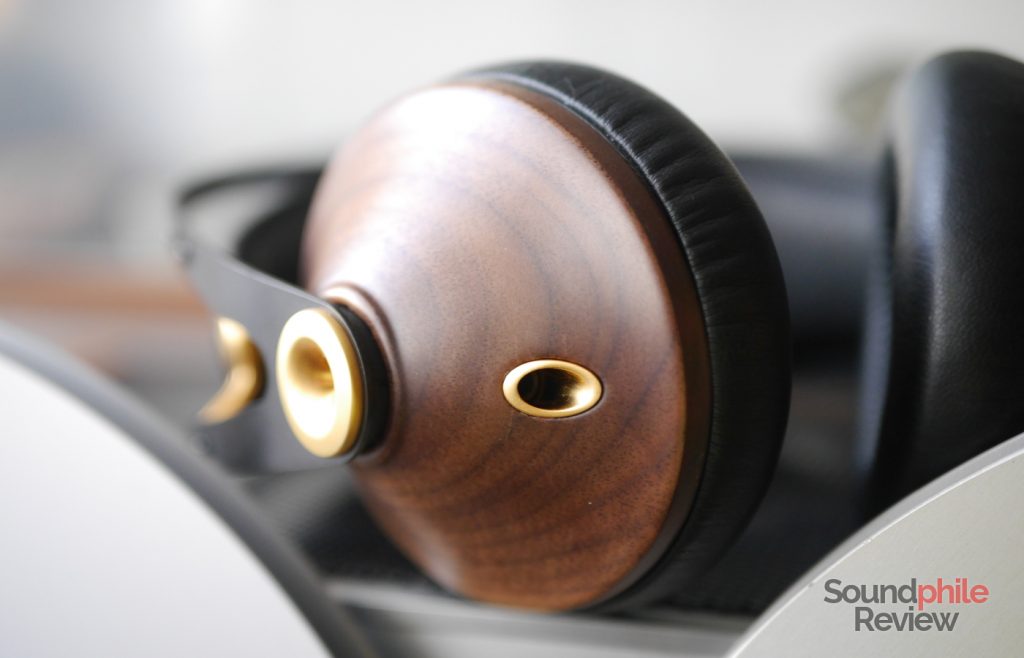 Build quality is top notch. The headphones feel solid and the simple, all-mechanic build (no glue is used) make them appear sturdy and resistant. Meze nailed it when it comes to materials and there’s no part of the 99 Classics that feel cheap, flimsy or inadequate.

As my scalp is very sensitive, I find it hard to keep most full-size headphones on my head for more than half an hour – but that’s not true for the Meze 99 Classics. Thanks to the suspension system and its softness, I can keep using them for even three or four hours at a time. Comfort is a very subjective matter, but if my experience is of any indication the 99 Classics are really comfortable to wear for extended periods of time. That’s mostly due to the fact that the adjustable headband is large and relatively soft, thus distributing the headphones’ weight on a larger surface and easing the pressure on the scalp, though the weight of just 260 g surely have an impact, too. Well done, Meze!

The earcups padding I got are the old style with smaller inner space; newer units have a larger hole that allows for a better fit of the ear and consequent better comfort. The problem with the old style is that the space is just barely there for your ears to fit in and it takes a bit of time to find the right spot. Larger, deeper pads would make it easier to find the right spot and would enhance comfort in the long run, though they’re really comfortable as they are now. 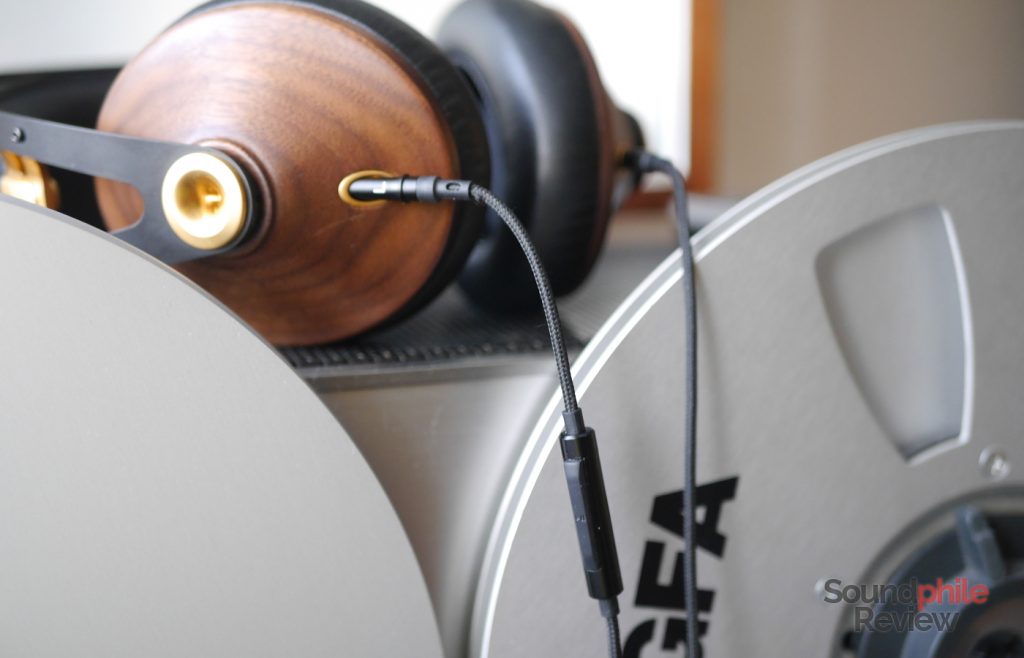 Although headphones such as the 99 Classics are meant to be used indoors (who would wear them on the subway?!), their isolation is actually pretty good. They can isolate you enough so that music will cover outside noise even at moderate listening volume. The microphone is decent enough to handle calls in relatively quiet environments, though it won’t be able to handle situations with lots of noise.

I’ve had these headphones for well over a year and they may have played music for over 300 or 400 hours now. I tested them with various sources throughout time; for the purpose of this review, I used an Aune M1s, a Topping DX7 with its own amplifier or in conjunction with a Head ‘n’ Hifi Objective2 amplifier and a Little Dot MKIII SE.

The Meze 99 Classics are overall balanced in tonality, though they tend to the warm side with a boost of mid bass that gives sound a stronger punch. The sound is fast and impactful, with lots of small details and nuances being portrayed and a superb clarity throughout the whole spectrum. It’s not as analytical as the sound from headphones such as – say – the (open-back) HiFiMAN HE-560, as the Meze 99 Classics tend more towards a fun approach that colours the music and lends it a bit of additional excitement.

Soundstage is large for a closed back headphone, though it is no match for even relatively narrow-sounding open headphones (i.e. Sennheiser HD650). The 99 Classics are able to display the instruments on a wide front, taking advantage of the whole soundstage – imaging is really good!

Bass is the defining feature of the Meze 99 Classics. It’s bold and powerful, though never overpowering or bullying. Sub-bass is deep and packs a punch, and although it is present in good quantity it’s always slightly behind the mid bass. The latter is the true protagonist in the lower end of the spectrum: it’s abundant and definitely more than what I would define as “neutral”. It doesn’t make the sound appear bloated, though, as it does not cover the mids nor come too much to the foreground.

Though bass is front, midrange is not left behind. In fact it is present and rich, and it is in the front of the stage – almost with an “in your face” presentation. There may be a few occasions, especially in crowded tracks, where mid-bass takes on the lower mids and overlaps them a bit, though it never leads to a complete loss of control. Voices are natural and lively; listening to Touch by Daft Punk it seems almost like Paul Williams is singing in front of me – yes, voices sound that natural to me, and it surprised me given the coloured nature of the sound signature. The only downside is that sibilance is clearly audible, though it’s never unbearable.

With this warm signature, the Meze 99 Classics do not let focus on the highs slip away. Treble has in fact good extensions and sufficient presence; it’s able to show itself effortlessly and to lend air and clarity to the scene as a whole. Though it’s always clearly audible in the mix, it’s never piercing or harsh; on the contrary, it’s easy on the ears. Although I usually like bright headphones, the 99 Classics did not disappoint me in delivering highs that I can clearly hear in the mix.

Although my personal preference drives me into thinking the 99 Classics are best for those genres I call “acoustic” (i.e. classical music, folk, blues, jazz), their warm character may be an element that pairs well with most genres. It all depends on your personal preference, of course, but their balance is not that altered so that they sound outright wrong with any genres. Their emphasis on the lower mids region (including mid lows) is not excessive and this leaves enough room for the rest of the spectrum to breathe, therefore one can enjoy even genres such as electronica, dance, metal and classic rock, among the others.

Though they’re open-back, the similarly-priced Sennheiser HD650 (or the HD6XX variant sold by Massdrop) is a reference against which to measure other products on the market. The Meze 99 Classics hold no exception; they hit harder on sub-bass and have a somewhat more emphasised lower midrange, but the HD650 often sound more balanced and relaxed. Treble is also more prominent on the 99 Classics, being more forward in the mix and extending higher. In general, the 99 Classics appear more “aggressive” in their sound presentation, though not always as fast. They’re very different in all aspects, with the HD650 being more towards a relaxed, mid-centric listening experience (and thus being able to reproduce a narrower selection of genres at its best), while the Meze 99 Classics is more of an all-rounder that anyone can enjoy.

I consider the Meze 99 Classics among the best headphones you can buy – hence the high rating. Their peculiar design and sound signature make them stand out from the crowd and affords them a niche where they reign supreme.

Their warm sound means they shine with acoustic recordings and voices, but there’s no real limit to music one can listen to – save for one’s taste. They’re technically almost impeccable, thanks to a great mix of ingredients that really make listening to music a rewarding experience. The Meze 99 Classics hold few flaws and they win my recommendation on closed-back, full-size headphones.