Is the principle used to produce sound really important? In other words, does the driver type matter? Usually, the answer is yes. The thing is that each type has its own peculiar features, which have an impact on the sound. Dynamic drivers are often quoted for being the best at providing a physical sensation to bass, balanced armatures as having fast speed and planar drivers as having linear response up to the midrange. Sometimes, though, things go wrong and drivers don’t meet expectations. The Toneking BL1 are in-ear headphones whose main selling point is their use of a planar driver. Alas this does not mean much, as they seem to be planar just for the sake of being planar.

Disclaimer: I received a complimentary unit from Linsoul Audio. They sell them on their website at $209.

The packaging is the same we’ve seen come with other Toneking earphones: a cardboard box with a transparent window on the front. Inside are the earphones with a metal case, a set of two pairs of foam eartips and a set of five different sizes of silicone eartips. Alas Toneking uses the same packaging and accessories for all their products, irrespective of their price. When buying higher-end products one would expect better accessories, but that’s not the case. Luckily, though, the accessory set is good enough! 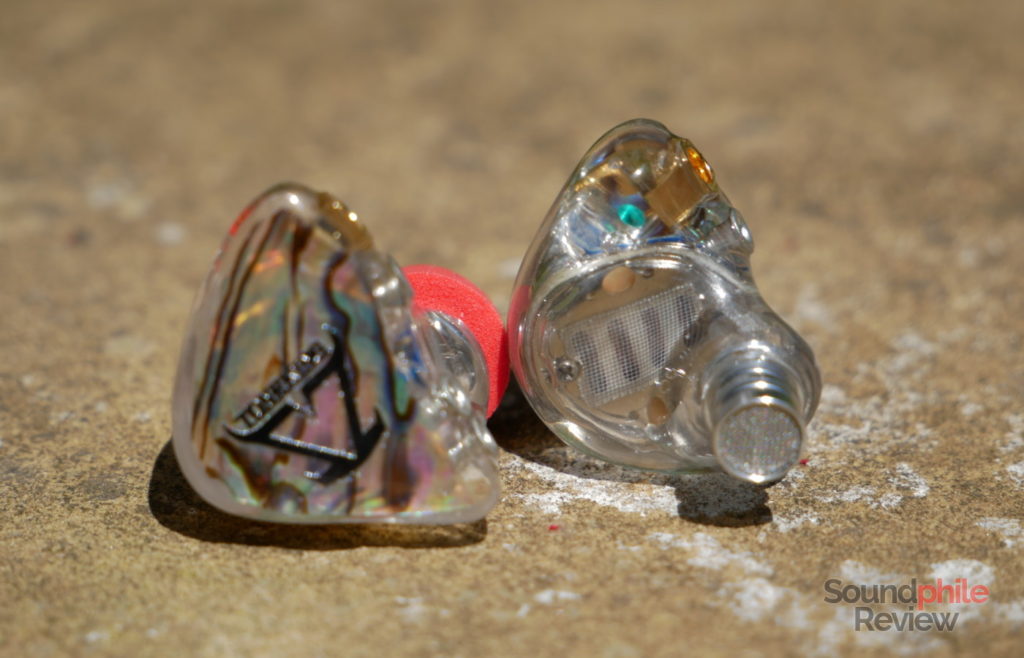 Accessories are not the only thing that’s always identical in Toneking products. Design is too. The Toneking BL1 are largely identical to the Toneking T4 and the Toneking T88K. The only exception is colour: the resin are made of transparent resin and this shows the inside perfectly. That’s rather scenic, as it displays the planar driver in great detail. It’s made of a circular metal box held together with screws, with four oblong vertical holes. On the other side there seems to be a blue PCB. On one side there are three holes made with three metallic rings. They are probably there to disperse the pressure that builds up in the shell. 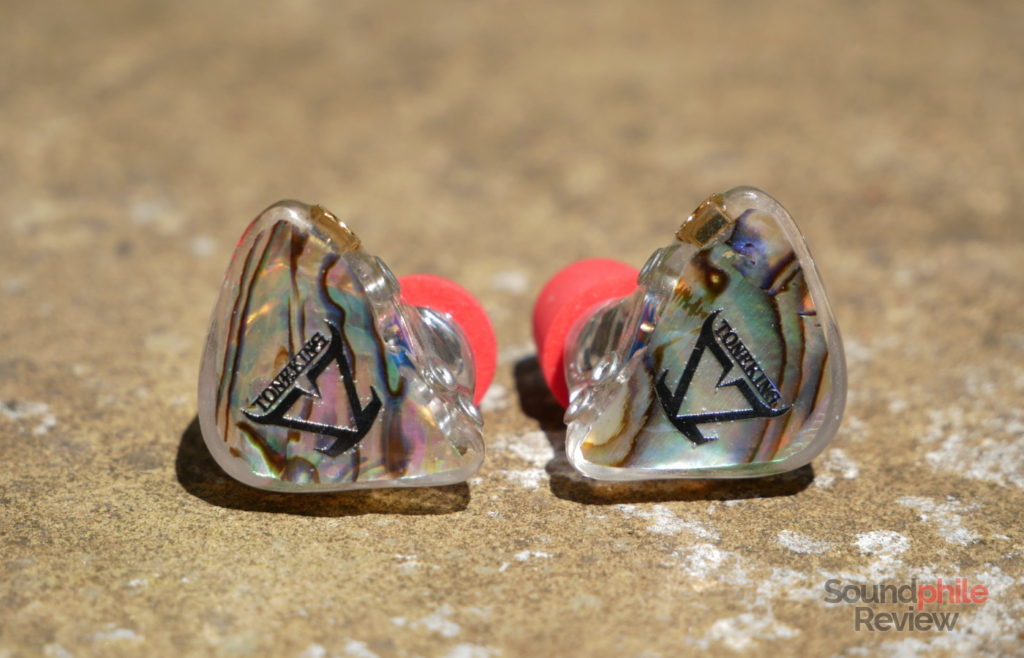 The shells are overall pretty large, with a triangle shape that has smooth edges that make them decently comfortable. The sheer size can be an issue to some people, though, as it is even larger than that of the already large T88K. The housings are not entirely made of resin, though. the nozzle is in fact made of metal, with a grille covering it and preventing dirt and dust from entering. There’s a large lip on the nozzle, so eartips should theoretically not come off. Alas they do, at least in my experience.

The Toneking BL1 are pretty well built, with resin that appears sturdy enough and shells that seem to be decently resistant and durable. 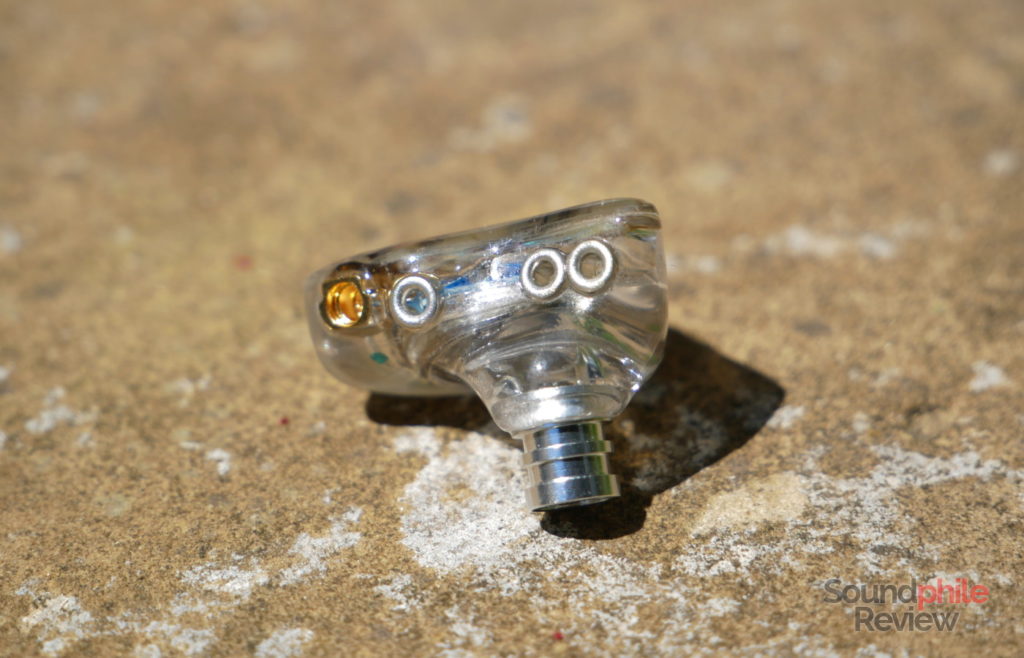 Comfort is good despite the large size. Due to that, in fact, the BL1 do not fit inside the ear and instead stick out of them, so they don’t press against any part of the ear and therefore do not cause discomfort – at least not in a few hours.

Due to the presence of vent holes, the Toneking BL1 are by all means open as far as isolation is concerned. While they are technically semi-open, they don’t offer any better isolation than if they were completely open. Closing the holes has a limited effect on isolation and it makes sound so much worse as it is much brighter and more sibilant.

The cable is the usual one Toneking uses – no changes here.

I tested the Toneking BL1 using mainly two sources: the SMSL DP3 while I was at the desk and the Shanling M2X while on the move. The two devices shared the same microSD card loaded with FLAC files (most of which were in 16 bit, 44.1 kHz).

The Toneking BL1 need some amplification to sound good, or at least a decently powerful portable device. On the Shanling M2X I used to try them I had to raise the volume to around 30 using single-ended output, so phones and low-powered devices won’t probably be able to drive them correctly.

From a technical ability perspective, the Toneking BL1 do not fare well at all. Soundstage is in fact compressed and small: it’s narrow and without any depth, with everything sounding on the same layer. Imaging is also insufficient, as it does not place instruments with a clear location on the stage. Everything sounds as if it was coming from every direction, with barely any left/right/centre placement. Instrument separation is terrible: the sound is congested and muddled and definitely not on par with headphones in this price range. The BL1 sounds much worse than their direct competitors, up to the point even relatively simple tracks sound mushed and flattened.

When we take tuning into account, things do not get much better. On the contrary, tuning has some glaring issues that make the BL1 less than desirable for general listening. Much like the Toneking T4, the BL1 have a very large spike in the upper midrange and mid-treble regions which, together with dips in the mid-midrange, make the sound problematic. Let’s be clear: some people may like it and I am not going to question that (de gustibus non disputandum est), but this tuning is fatiguing and sounds off. Rage Against the Machine’s Bombtrack, which I have been listening to for more than a decade now, sounds completely off: De La Rocha’s vocals sound excessively aggressive, with guitars that do not sound right – their tone seems to be somehow wrong.

Bass has good physicality, as one would expect from a planar driver: it hits with good force and is therefore ideal with dynamic recordings with a lot of transients (e.g. percussions). It is decently deep, extending down to about 40 Hz and there is a good level of detail, which leads to good texturing. In terms of presence in the mix, I would say that bass is a bit emphasised, with a bump in the middle region, but not excessively so. The result is a nice bass section that suits dynamic and even aggressive genres well. Bass on tracks by the aforementioned Rage Against the Machine sound great!

Midrange, alas, is not nearly as good as bass. It is in fact emphasised in the upper area and a bit deficient in the lower area, leading to a very odd sound presentation. In fact I would not call it “natural” or “realistic” in any way, as it departs significantly from neutrality. Voices are especially affected by this change: in Fleetwood Mac’s Second Hand News they sound off, as not only do they sound more distant than they should, they also sound wrong. By that I mean that the voices lack body and sound shrill and strident, with artificial emphasis on the breath. It seems like there is a lack of coherence. In terms of detail there’s enough, but there’s no micro-detail whatsoever. Speed is good, as one can expect from a planar driver, and so is physicality.

Even though midrange has some issues, treble is the real issue here: there is a large spike around the 10 kHz mark which makes it really fatiguing and aggressive. It is in fact difficult for me to bear it for longer than a few minutes, to the point I have to lower the volume a lot. It may be an issue with my ears but, having listened to hundreds of different headphones at this point, I think this is not really normal. The positive side of this emphasis is that details emerge clearly from the mix: snares, cymbals and other high-pitched instruments shine here. Detail is in fact very good and the forwardness makes it super easy to catch it.

Let’s do a swift comparison with the Tin HiFi P1, which are the only real competitor with planar drivers I’ve tried. There’s no contest between the P1 and the BL1. The P1 has less bass and less depth, but more detail; midrange is much more accurate, thanks to the absence of the upper midrange spike and a bit more body in the lower midrange; treble is less emphasised and therefore nowhere near as fatiguing as the BL1’s. Soundstage is larger and deeper on the P1 and imaging is more accurate. Instrument separation is also better. The BL1 appear therefore better only if you really crave bass but you are ready to struggle with untamed treble

Alas the Toneking BL1 suffer from poor tuning that makes them fatiguing and unnatural. While they are very good from a “physical” perspective, both in the sense of build and comfort and in that of the physicality of sound, they are alas a disappointment when it comes to sound itself. Even though tuning is a matter of preference, and I don’t question the fact that there may be people out there who enjoy this tuning, on the other hand there’s no doubt that the BL1’s sound signature won’t be appreciated by many people. On top of that, they do not have especially good technical ability, so I suggest to buy them only if you really think you are going to like their exaggerated upper midrange and treble.