Judging earphones just by the count of their drivers is often a huge mistake. It all boils down to how the drivers are tuned, and even two earphones with the same drivers won’t sound the same if the tuning process is different. The Toneking T4 offer four drivers which do a good job, but are tuned in a peculiar way that pushes treble forward. The good news is they’re excellent on other fronts, so they end up being very good if you like that kind of sound.

Disclaimer: I received a free unit from Linsoul Audio. They sell it on Amazon at $206.

Toneking does not really vary their packaging from one unit to the next. That’s a good thing as they have a very good accessory set, but that leaves a bit to be desired on higher-end products. The Toneking T4 comes with a metal case, a 4-core cable, a cable clip and a set of eartips which includes three sizes of foam tips and three sizes of silicone tips. It’s actually the same as the Toneking T88K! 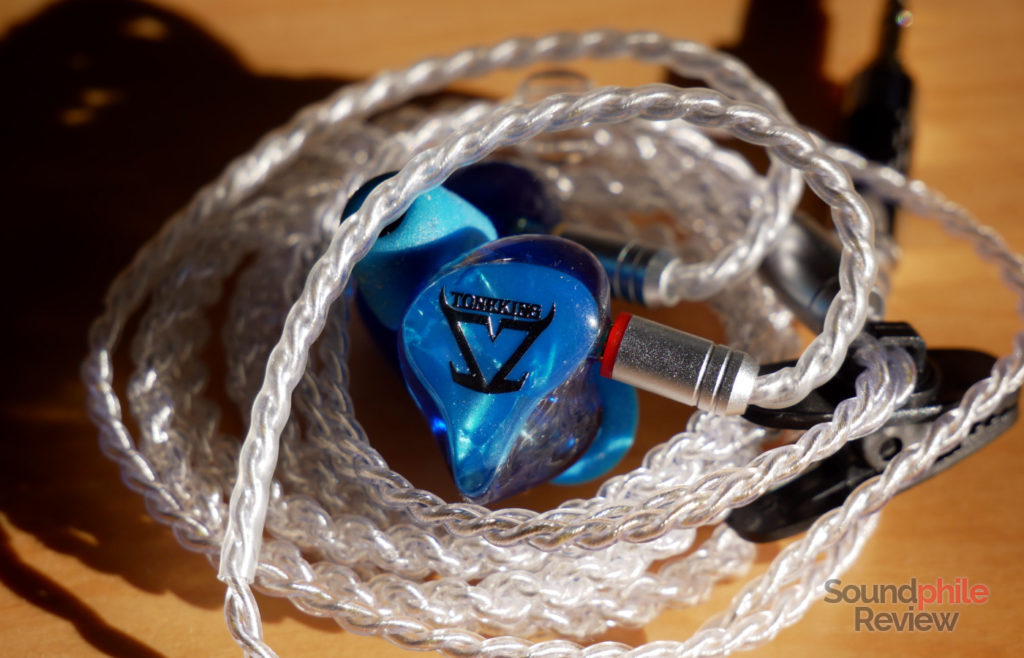 Packaging is not the only thing that Toneking does not alter when they create a new model: the general design of earpieces is also left intact. The T4 is in fact a smaller version of the T88K, but that’s about it: the shell is made of semi-transparent resin, in this unit coloured in bright blue, while the faceplate is made of the same material but embedding specks of reflective material and the Toneking logo. The faceplate actually looks like marine water, with reflections that change depending on the angle you them from. The effect is stunning and makes the T4 especially attractive. 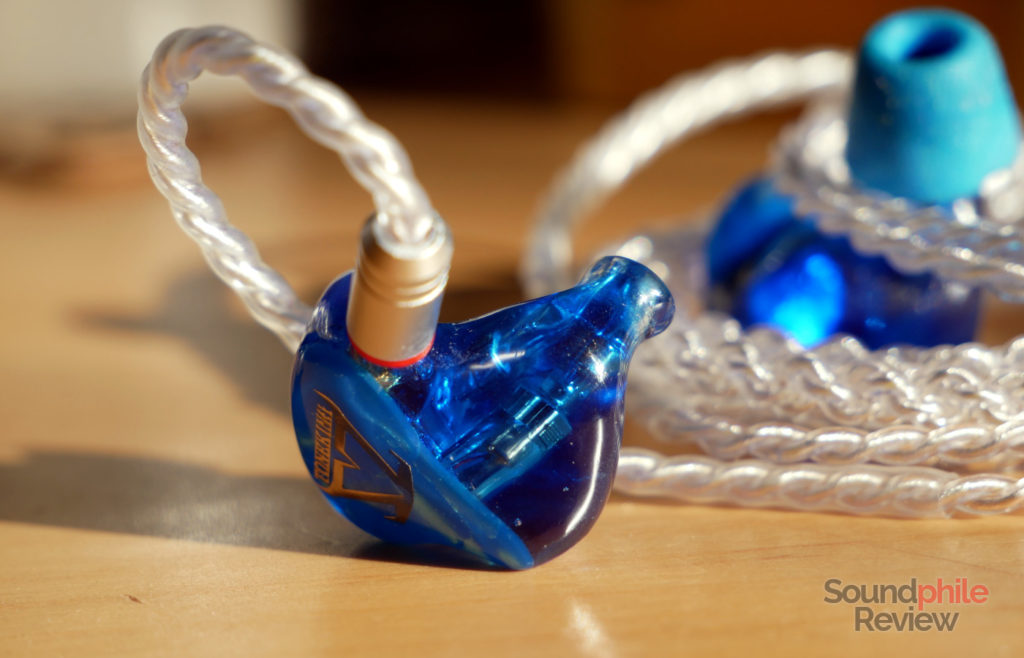 Build quality is really good, as in Toneking’s tradition, and the T4 appear to be put together quite well. They’re made of resin and they appear to be a single piece, so they should be quite resistant and durable. The nozzle is part of the shell and appears more similar to that of custom in-ear monitors than to that of universal in-ear headphones, with two sound bores in it that deliver the sound to the tympani.

In terms of comfort, the Toneking T4 came out as decently comfortable even on longer listening sessions (2+ hours), despite their shells being “ergonomic” in shapes – so they should follow the natural shape of the ears, despite each person having different shapes. This shaping often leads to earphone not being comfortable to me, but in this case it seems it works decently. That does not mean it will work for everyone. The “wings” on top of the shells also cause the only bit of fatigue, as they press against the inside of the ears. 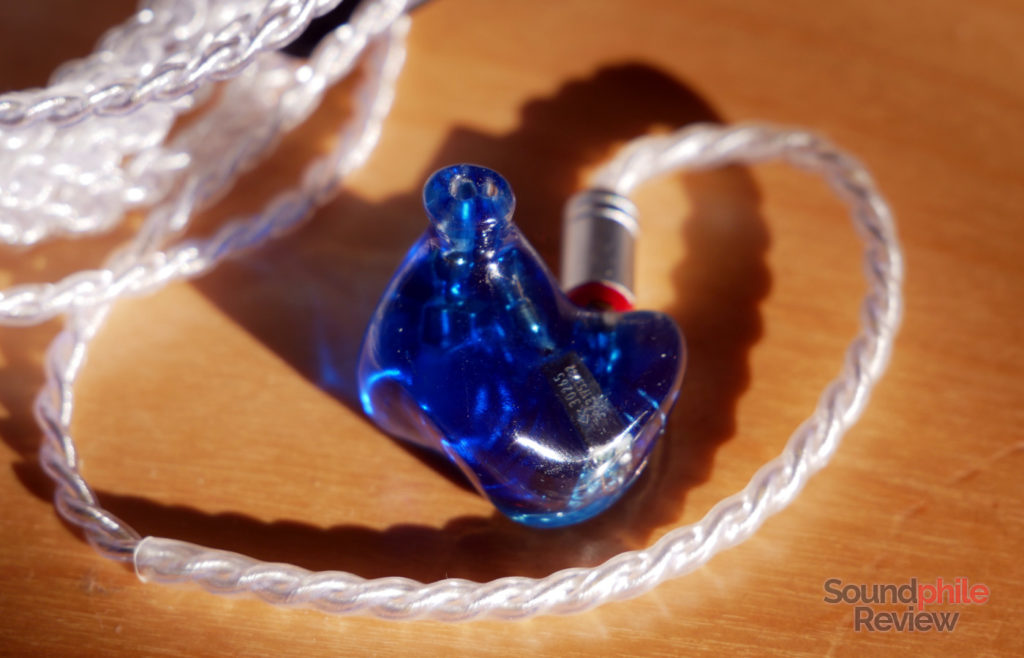 The Toneking T4 surprised me with their ability to isolate: wearing them on a flight I could hear nothing of what was outside, not even the loud jet engines. This is even better than the Shozy x Neo CP, and it puts the Toneking T4 on top of my list of “best isolating in-ear headphones”. 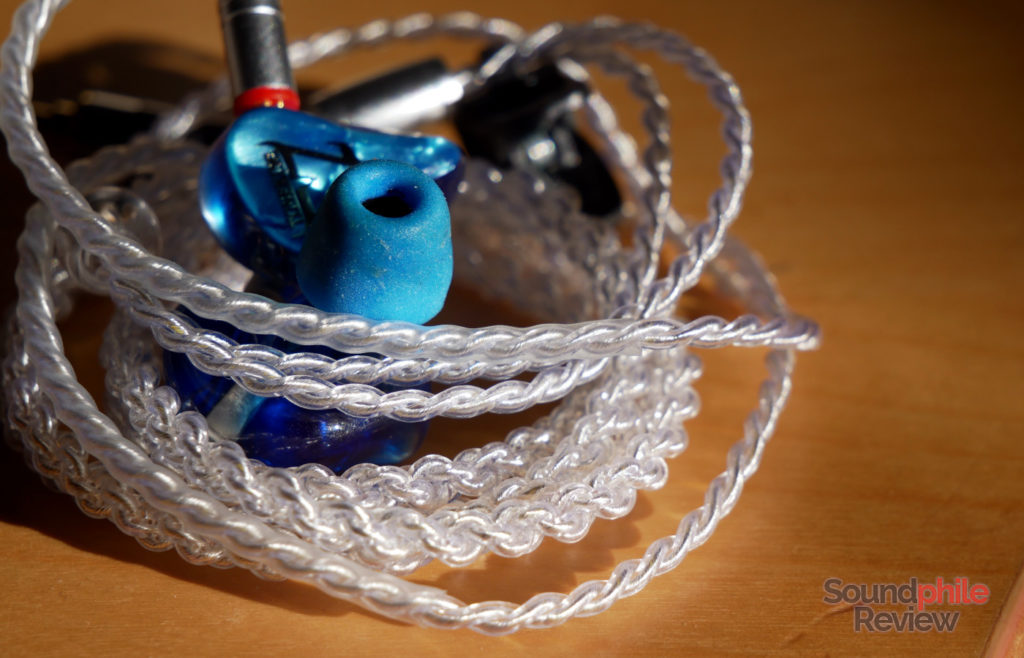 The cable is made of four silvery cores, each with its own thick transparent plastic sleeving. Each core is not really thick per se, but it is covered in plastic and that makes it larger than it otherwise would be on its own. The cable is soft and malleable, though the plastic is a bit springy and tends to tangle up. All parts are made of metal – the jack casing, the MMCX casing and the Y-split are all metal. All in all it’s a very nice stock cable.

I tested the Toneking T4 using a Burson Audio Playmate when at the desk and an xDuoo X10T II with an xDuoo XD-10 Poke while out and about.

The Toneking T4 do not really need any amplification, given how they have low impedance and relatively high sensitivity. Any source, including phones and low-end DAPs, are able to drive them without issues.

Music is presented as if musicians were on a wide, yet very shallow stage. There is a large lateral extension, which is however not complemented by an equally large depth. The main issue is that music is not presented on the whole of the stage, but in the centre and at the two ends, so this gives the listener an impression of what’s happening that’s not really coherent. Instruments are well separated on the other hand and the picture is clear enough overall.

Bass is portrayed well, but it’s still bass produced by balanced armatures and that influences it heavily. Lows are in fact mostly concentrated in the mid-bass area, with a rapid slide to inaudibility going down with frequency. There’s a good presence overall, but the limited depth can be felt with more bass-intensive tracks. A good thing is that, despite being produced by balanced armatures, bass on the T4 is a bit physical. It doesn’t really have any slam or hard kick, but it’s enough to be felt. It’s also decently fast, but not exceptional when it comes to detail and separation.

Midrange has a bit of a spike in the upper region which makes it bright and open, but which also takes a toll on the listening experience as it is probably a bit too forward and ends up being a bit fatiguing in the long term. Amazingly though, the overall balance is not influenced too much: despite this added presence in the upper region, midrange always sounds really good, with good coherence and a very much decent timbre. Sibilance is noticeable, but not excessive. Detail is very good and so is speed.

Treble takes off from the already significant peak in upper midrange and takes to uncharted heights, where it becomes so strong it is the main ingredient in the sound. There is in fact a large peak in the middle region, after which there is a drop-off and which follows a steady climb. The result is an emphasised treble section that sounds a bit piercing, but is still in the realm of tolerability. The positive thing is that this emphasis brings out details fantastically, presenting them clearly and laying them in front of the listener where it’s easy to catch them. Even in tracks where one would not expect to hear many details – I mean, Det som en gang varby by Burzum is not exactly famous for being well-produced – one can hear lots of small details, so that’s only more true with well-produced tracks. I would not describe the sound as “airy” or “sparkling”, but it has an undeniable openness to it.

Let’s compare the Toneking T4 to other IEMs:

The Toneking T4 are good earphones for fans of open, trebly sound signatures where the focus lies on the upmost part of the range. Their decent technical ability, good built quality (with a good cable, too) and nice design make them an interesting proposition. They are not for everyone though, as those with treble-sensitive ears will definitely not appreciate them. They are good for some specific cases and specific people – they cater to a niche which will surely enjoy them for what they are.