Does adding more balanced armatures to earphones always make them better? I don’t think so, yet the Tenhz T5 are actually really good with their whopping five drivers. Those five drivers are so good that they don’t make you long for earphones which are seemingly better equipped with a higher driver count. Tenhz’s line-up spans multiple driver counts, but the Tenhz T5 seem to hit the sweet spot.

Disclaimer: Linsoul Audio sent me a complimentary unit. They sell it on Amazon at $190. 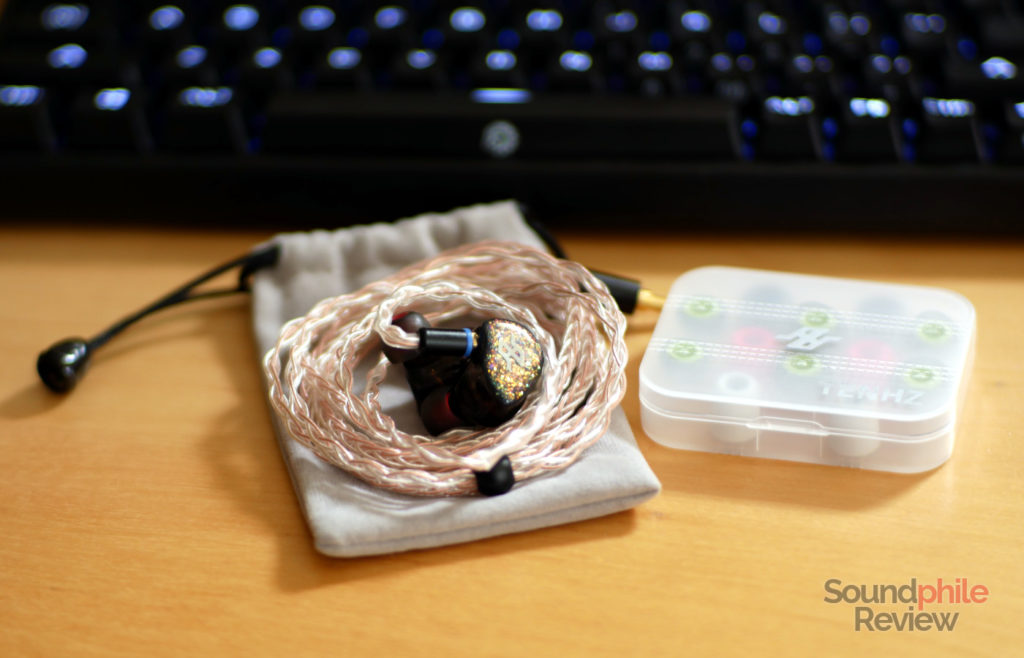 The Tenhz T5 comes with a nice set of accessories: in the box there are a cloth bag and a small plastic box with a set of eartips (three pairs of silicone tips and three pairs of foam tips). 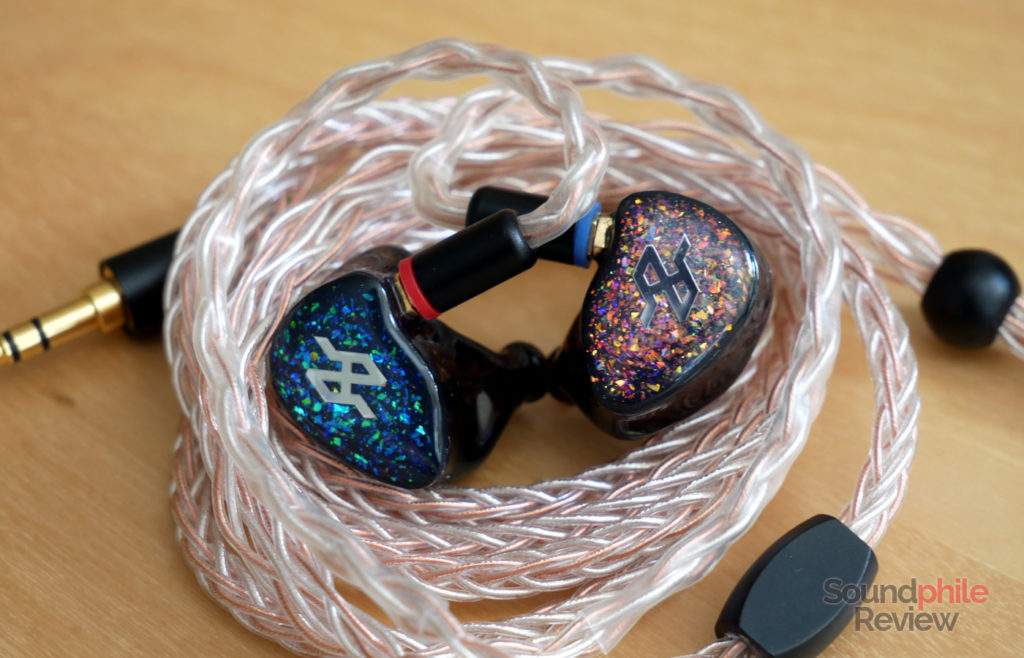 The Tenhz T5’s shells are loosely triangular in shape, so that’s not what sets them apart. Colour is. The T5 are in fact made of transparent black resin, which partly shows the innards, with a peculiar glittery faceplate. Each faceplate has the Tenhz logo on it on a background of glitters which has its undeniable charm. There’s nothing really unique to the T5, but they are good looking.

There are various options available for the colour of the shells; the sample I received has left and right in different colours (for some incomprehensible reason right is blue, left is right), but there are other options which look better in my opinion. The faceplate is sparkling as it contains speckles of some shiny material. The effect is surely attractive, and it is quite different to those seen on the Toneking T88K, PMV Crescent 8BA and Shozy x Neo BG. Just like the Tenhz P4 Pro, the Tenhz T5 uses the MMCX standard for the removable cable. 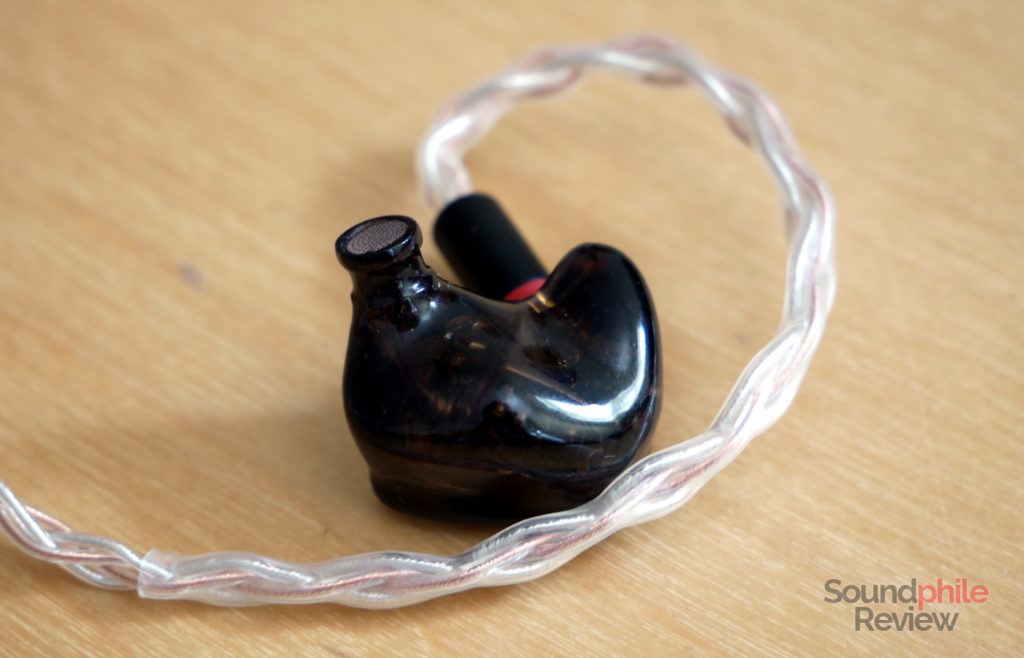 The Tenhz T5 are very well built, with the shells being made of one single piece of resin that appears durable and the cable being well put assembled. My only concern is the MMCX connection, but that should not be a problem unless one keeps on stressing the connector by plugging the cable in and out.

The Tenhz T5 can stay in my ears for hours on end – the combination of a good cable and of well-shaped shells makes them especially comfortable. The resin shells deserve a special mention as they have an ergonomic shape, but for once I find it comfortable. That does not mean that everyone will, as the wearing experience is deeply personal, but the T5 should be comfortable to most people.

Isolation-wise, the Tenhz T5 are not the best you can find on the market, as they offer moderate isolation at best. Even when using foam tips the T5 can only reduce the volume of surrounding noise by a small margin. This makes them not especially useful on public transport and in other similarly noisy situations. 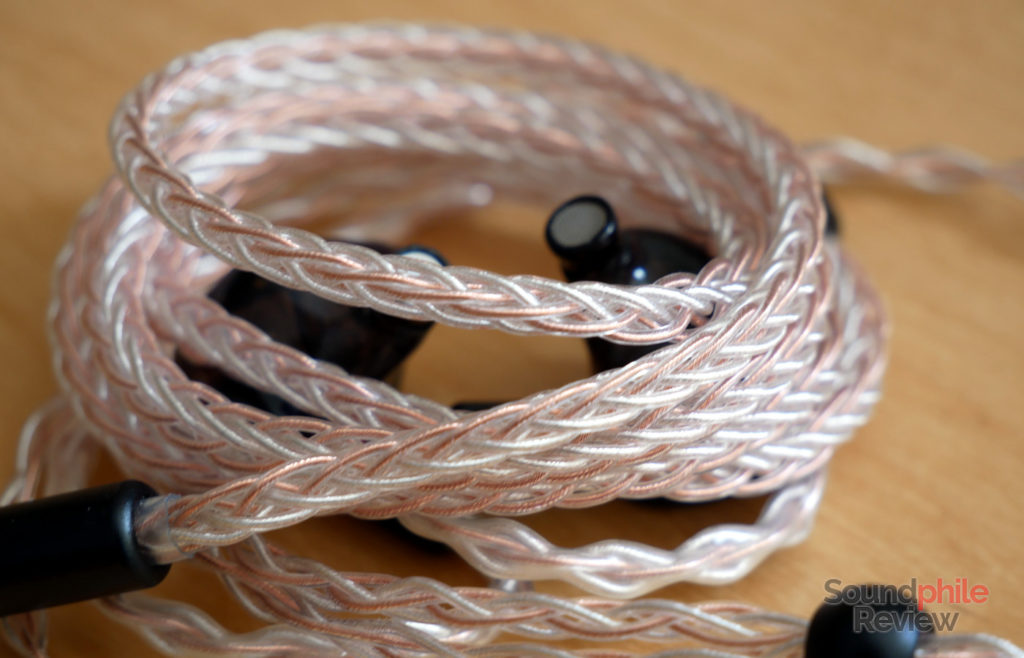 The cable is well-made and actually one of the best stock cables I’ve seen in the sub-$200 range. It has eight cores, four per channel, half of which are silver-plated, while the other half is pure copper. The cable as a whole is soft and malleable, and is also unexpectedly light. This may be in part thanks to the lightweight metallic elements (jack housing, Y-split, MMCX housings). The ear hook is made with relatively soft pre-moulded transparent plastic.

When testing the Tenhz T5 I used a Burson Audio Playmate when at the desk and a Shanling M2X while on the move. In the former case I also used an iFi IEMatch. Most of the music was in FLAC files in standard resolution (16 bit, 44.1 kHz).

The Tenhz T5 use five balanced armatures, as their name suggests, which afford them a low impedance and a high sensitivity. They can be easily driven by any portable device and they definitely do not need any amplification (I mean, 10 Ω impedance and 120 dB sensitivity. You could drive these with a toaster).

The overall tonality is warm, with emphasised bass and lower mids that appear to be on top of everything else. They’re surely easy to listen to as this warmth is never invasive.

I would not describe soundstage as wide and spacious; it is instead more intimate and two-dimensional, extending from left to right but without presenting the listener with much in terms of depth or spatial cues that go beyond “left”, “centre” and “right”. That’s also because imaging is limited in its ability to place instruments on the stage. Instrument separation is fine, making instruments discernible in the mix with relative ease but never making them pop out as if it was playing alone.

Bass is typical of balanced armatures, being fast and controlled but not really physical nor deep. It is in fact prominent the middle section, with a bump that has a steep slope on the side facing lower frequencies. Depth is in fact limited and the Tenhz T5 can only reach down to about 50 Hz with enough strength to be audible. Control is good enough so that detail emerges clearly, although more crowded tracks expose the limits of the balanced armature as there is some mashing and loss of detail. There’s no leaking over mids and the good coherence of bass means there is no privileging a single area or having monotonous bass.

Midrange is skewed towards the lower area, with audible emphasis that makes the sound warm and laid back. This enjoyable tuning makes acoustic instruments and voices sound better than trumpets and electric guitars, yet it can reproduce anything without it sounding wrong – some things just sound better than others. The sound is coherent, so everything sounds more or less right – there are no significant oddities going on. Detail retrieval is very good, so the overall impression is that all the instruments are portrayed with many details, although the T5 are not a detail champion and omit the finest details.

I would describe treble as being just a side dish in the signature of the T5. It is in fact really laid back, with enough presence only in the lower area. It then rolls off quite rapidly being barely audible. This reduced treble presence also contributes to the sound appearing warmer and takes a bit of air and sparkle from the sound. Conversely, this reduced presence makes the T5 more appealing to the treble-sensitive folks or to those looking for a more laid-back signature. There’s enough detail for treble to still be enjoyable and to allow the listener to get a grasp of what’s going on.

Here’s a small round-up of comparisons:

The Tenhz T5 is not one of those IEMs that make you say “wow!”; on the contrary, it is one of those in-ear headphones which you learn to enjoy. That’s because of their laid-back attitude, which comes from a warm(ish) tuning with slightly recessed treble. They are enjoyable irrespective of the genre one chooses, as their tuning is still balanced. They are comfortable too, and they’re well built. They may not be one of those “wow!” IEMs, but they surely are likeable.