Hakii is a spin-off of Havit, a Chinese company known for their range of audio products that spans from professional devices to ones made for fitness. The Hakii Time is the new flagship TWS model that sports ANC, so when they asked me if I wanted to take the earphones for a spin I immediately accepted. The Hakii Time target the mainstream users, with a tuning that privileges lows and highs. But unfortunately they also have a few issues worth discussing.

Disclaimer: thank you to hugo at Hakii for sending me a unit to review. The Hakii Time retail for around $80. 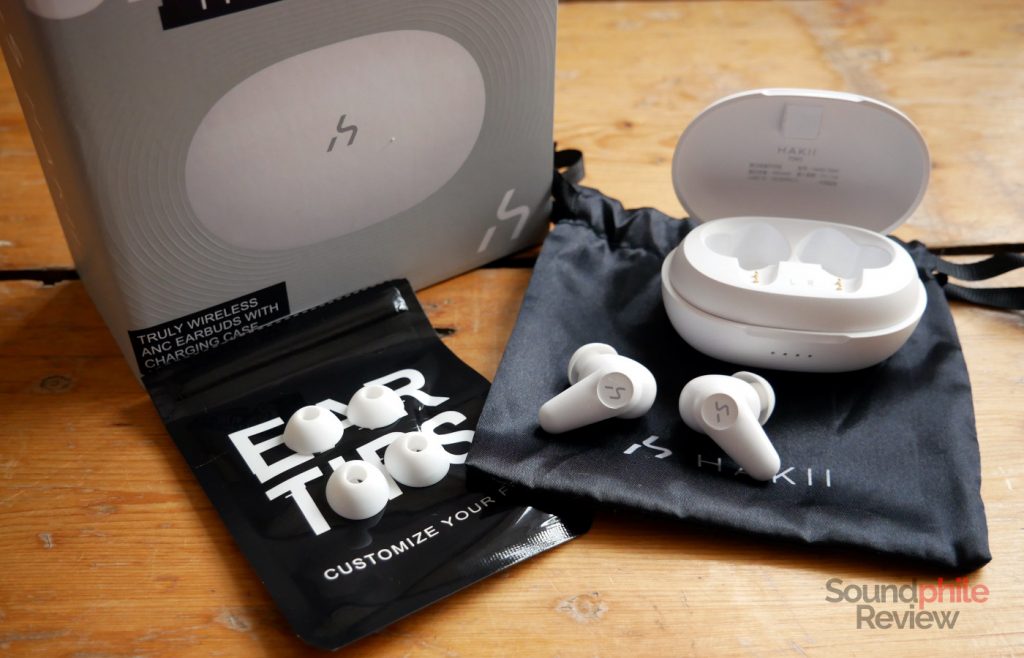 The Hakii TIme come in a very nice packaging: the cardboard box has a rubber loop on top to remove it from the sleeve it’s in. Inside the box are the earphones with their charging case, a USB to USB-C cable, a bag, a set of earpieces (three different sizes in silicone) plus a manual, which in my case is in Chinese. 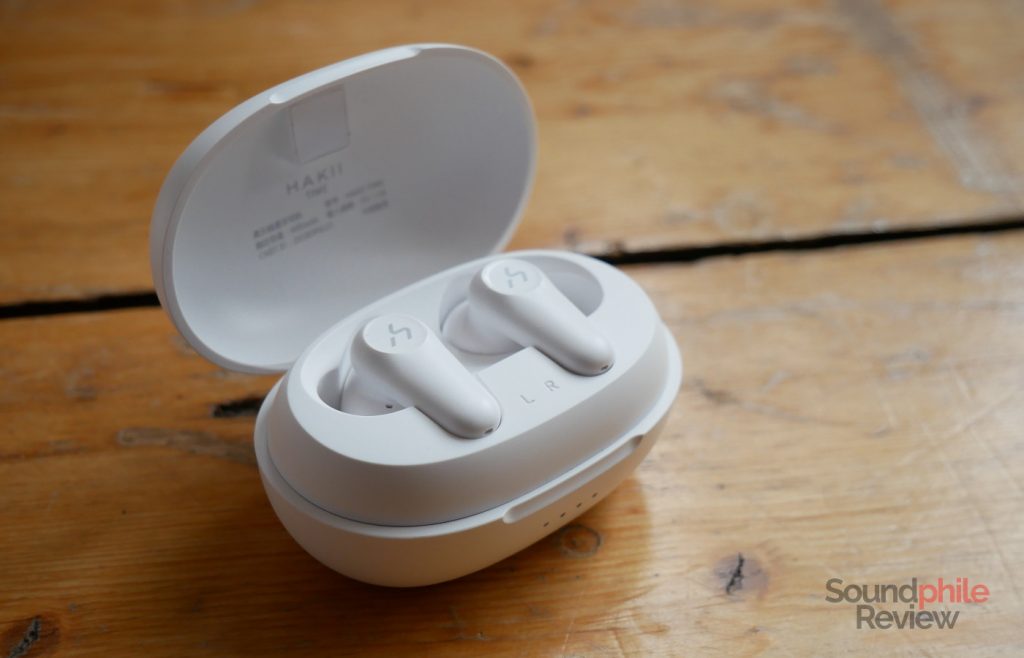 The Hakii Time have a stem design like the Apple AirPods or the RHA TreueConnect, but their body is pill-shaped like the 1More Stylish True Wireless (though they’re smaller). For this reason they appear like they have their own design, distinct from the others; in a period when design appears to converge on a few designs, this is quite good. The curved surfaces and lines make the Time look modern, almost futuristic. The unit I received is white, with a matte finish everywhere but on the side that faces the ear. 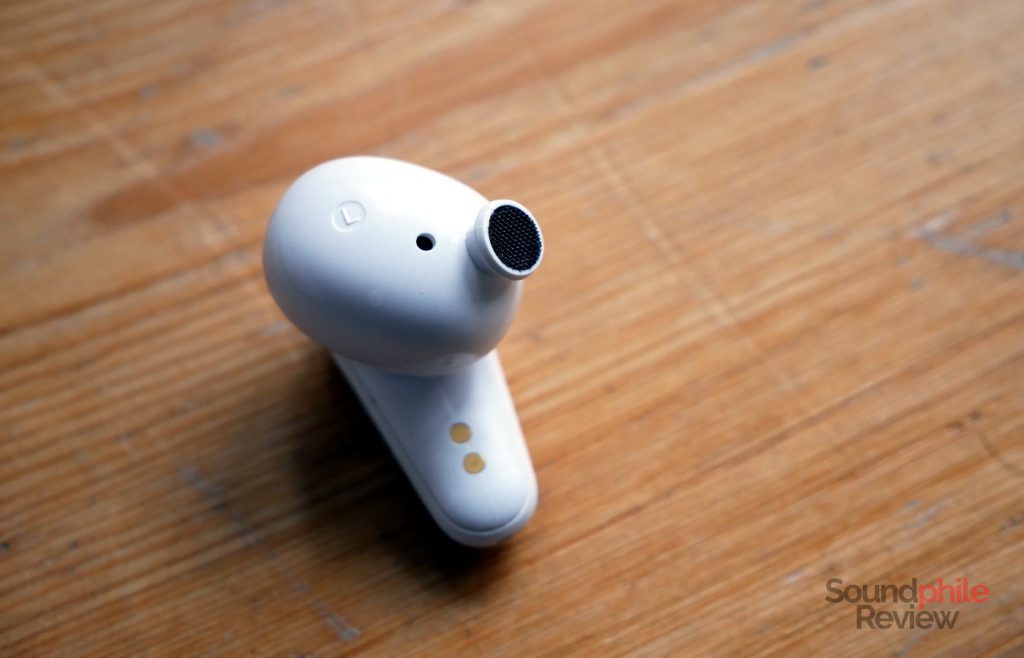 The Hakii Time feature IPX4 certification, so they are water resistant enough to withstand a shower (with some caution) or some workout. They appear to be built quite well with good materials; it’s not Apple level but we are very close to that. Although they’re made of plastic they really look cool and well-made.

When wearing the silicone eartips provided by Hakii I could not get a good seal, so much so that bass was basically non-existent. I then used foam eartips and these issues went away, so I could finally get a good seal. Isolation proved to be sufficient to reduce noises around me a tiny bit. This also means that without ANC I could clearly hear everything that was going on outside.

Comfort is very good thanks to the curved lines: I could wear the Time for more than two hours in a row without needing any pause. Due to the small size of the earpieces, I think they are quite universal and that most people will find them comfortable, including those with smaller ears. Your mileage may vary, of course. 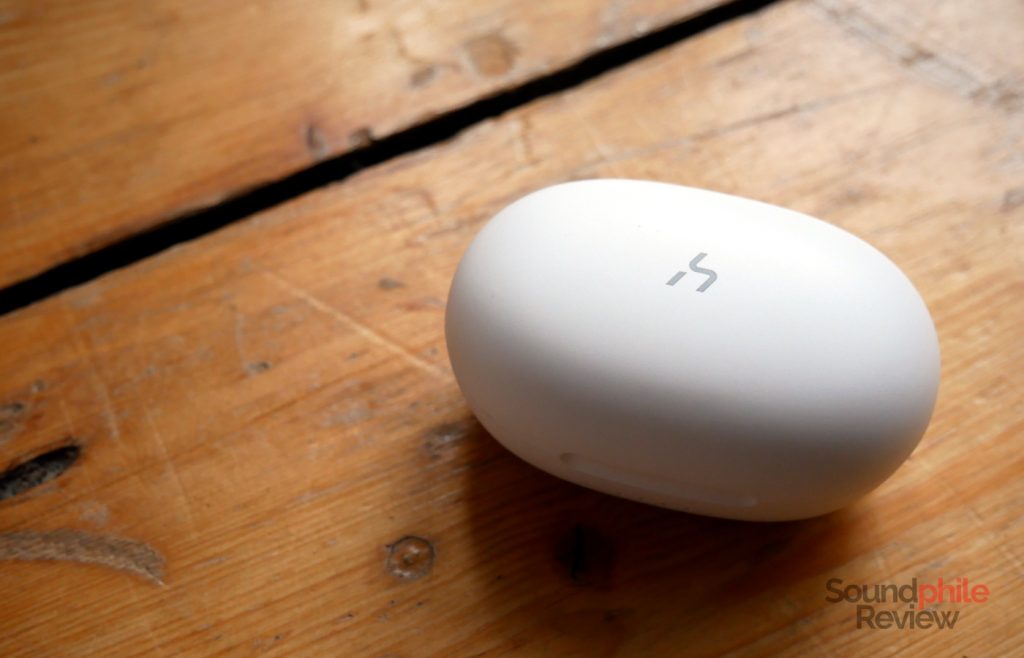 The case is small and light, so much so that it can fit in any pocket alongside a smartphone or another device; I could put them in the pocket of my jeans together with my DAP and they would fit perfectly. The case is built decently well and although there is some play with the lid, it’s very limited. The lid has a magnet to keep it closed. There are four white LEDs on the front that tell you an estimate of how much charge is left. 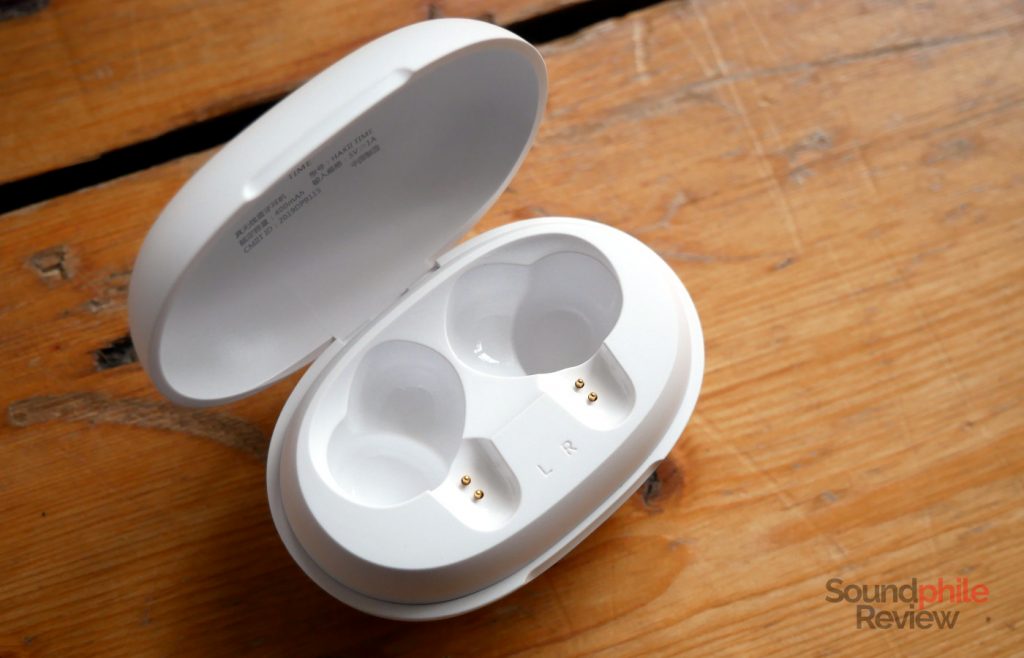 Hakii opted for Bluetooth 5 for the connection and for SBC and AAC as the available codecs; this excludes higher-quality codecs such as aptX, but SBC and AAC should work on most devices without issues. The connection is quite strong and stays so even in relatively difficult conditions (e.g. more than 5 metres away with a few walls between the earphones and the source).

Controls are touch-based, which is good, but they’re very sensitive, which is bad. While having good sensitivity on touch controls is actually a good thing, excessive sensitivity may lead you to inadvertently activate features you don’t want… and that’s exactly what’s happened multiple times to me, e.g. when adjusting the position of my glasses.

Alas the unit I received came with the manual in Chinese, which is a language I am unfortunately not fluent in (which is a very nice way to say I don’t understand any Chinese at all!). This means I had to rely on automated translations to understand how the controls work. Tapping one of the earphones makes the music play or pause, or answers a call; tapping and holding for two seconds enables (or disables) ANC. The issue with this is that you have to tap and release after two seconds, which is not easy to do precisely and in fact I often could not get it right and I had to do it again. There seems to be no “next” nor “previous”, nor any way to adjust the volume. All in all the control scheme appears rather poor as it offers basic functionality in a way that’s not straightforward.

This also leads to another consideration: the lack in volume adjustment makes it so that the volume is actually quite high even at the lowest possible setting on my devices; this makes the Hakii Time quite fatiguing to me as I am especially sensitive to volume and it may be a problem to other people as well.

ANC works decently well, eliminating most of the low-pitched noise coming from the outside world. Walking in a traffic-packed street with buses and lorries is usually a good test of the efficacy of an ANC implementation and the Hakii Time pass this specific test well. Most noises are removed entirely, and most others are reduced enough that they’re not an issue. Noises such as voices, which we can generally place in the midrange area, are not cancelled effectively, so they are still audible when wearing the earphones. 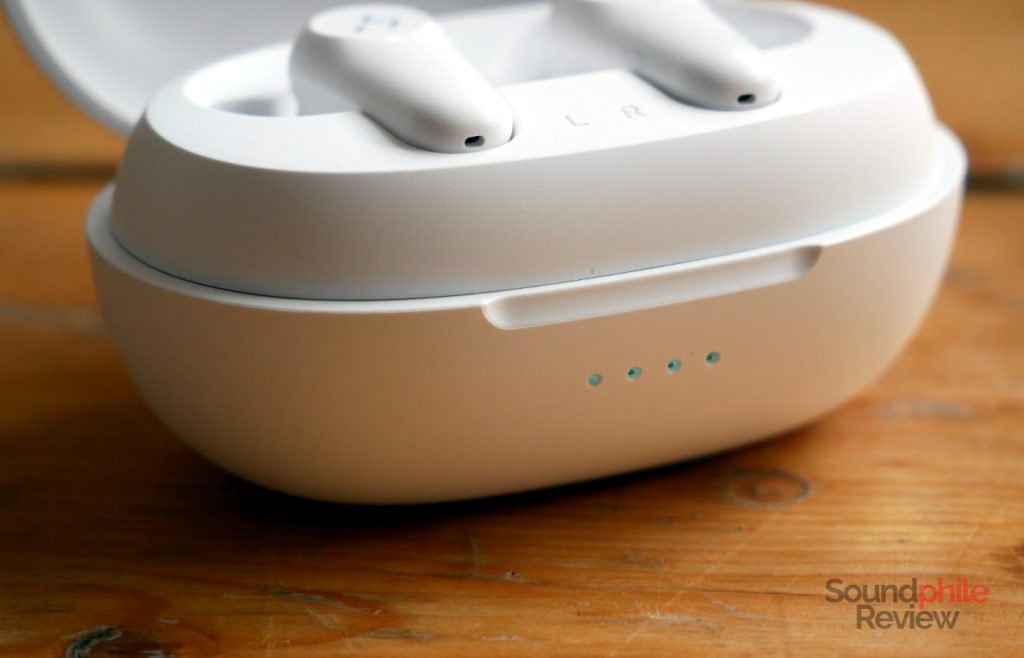 Battery life is low for today’s standards: the Hakii Time play music for about four hours without ANC being active and for about three hours with ANC, so this puts them to almost half of what is nowadays standard (5-6 hours with ANC). That’s not great in absolute terms and it limits the use cases of the earphones, but it is more than enough for usage during workouts.

The Hakii Time target what I would define as a common V-shaped tuning, save for the fact that the upper region is more emphasised than the lower one and gives the whole sound a sometimes sharp tone. They’re very good to get that boom and sizzle that plays well with many modern genres.

Like many affordable Bluetooth products, the Hakii Time display strong background noise in the form of hisses and screeches. They’re strong enough to be audible on top of tracks such as Dead Already from the American Beauty soundtrack and they increase in volume together with the music, so you can’t really get rid of them, though louder tracks (e.g. metal) do cover them.

Soundstage doesn’t have much width and appears rather compressed, but it oddly has a bit of depth: the music feels like is being played in a room that has some space in front of the listener where the sound reverberates, although the instruments sound close. Imaging does the basic job of placing the instruments left, centre and right, but nothing more than that. Instrument separation is sufficient, but even moderately complex tracks show its limits.

Bass is abundant and mostly concentrated in the mid-bass region which dominates the rest. Sub-bass is just not there, which is however expected in earphones like these. Bass also suffers from control issues, as it often jumps in front of the mids and this, together with the large presence in general of bass, makes the sound muddy. Transients are slow and so is decay, so most drum hits sound unnatural and bloated. Detail follows from there in being poor, with the earphones not really able to convey the smaller variations. Overall the bass section appears mostly in line with what most “mainstream” earphones offer in the low-end.

Funnily enough, mids are different from bass in terms of transient speed, as they are decently fast and even a bit physical. The rest is not as good, though, as there is an accent on the upper region that makes midrange fatiguing on the long run, especially if you listen to music with instruments such as electric guitars. Mids are also recessed compared to bass and treble, although they do not sound distant. Detail is decent, but limited mainly by the lack of instrument separation which makes everything mash up a bit.

Treble is emphasised, with several spikes throughout the lower and middle region. These make treble fatiguing if the tracks being listened to are already rich of sounds in this area; a practical example may be a song like Black Crow on a Tombstone by Satyricon, which is full of cymbals. This track also showcases well one of the limitations of the Time: detail. It’s limited and cymbals, crashes etc. sound a bit flat and lacking in depth and presence and individuality, as all the hits fuse into a carpet of sounds that are hard to distinguish from one another. Although it might do for listening to music on the subway, treble just doesn’t sound right as soon as you scratch the surface.

Since they offer ANC, I am comparing the Hakii Time to other earphones that offer a similar functionality:

The Hakii Time join the substantial ranks of “mainstream” earphones that bet on style more than sound to win the customers’ favours. The Time have some interesting features, such as ANC, which are however counterbalanced by some poor choices in terms of sound signature and amplification. The very strong background noise is an issue, as is the overly emphasised treble, as is the poor technical section. The Hakii Time are okay if you want dependable earphones with a very good Bluetooth connection you can wear on your daily commute, but there are actually better options out there around the same price.