The new Venture Electronics Monk IE come in two flavours: Biggie and Smalls. The name is a reference to the appearance of the sound – the Monk IE Smalls appear to have a smaller soundstage and a sound signature that is “smaller”. According to Lee, they are the same headphone design with differences in the size of the bass port.

They are indeed identical in terms of design, save for the colour, but they are radically different in terms of sound. In a sense, they are meant for a broader audience and fare better with more genres, thanks to a frequency response that’s more balanced.

Disclaimer: this is a pre-production unit Lee sent me free of charge. You can learn more about the Monk IE in VE’s website.

The Venture Electronics Monk IE Smalls come with three different cables and a full set of eartips comprising sigle-flanged, double-flanged, triple-flanged eartips made of two different types of silicone and foam tips. In fact there’s every category I mentioned in my best eartips guide. It also comes with three different cables: a normal cable with 3.5 mm jack and a remote with microphone, a silver-plated copper (SPC) cable and an Espresso (twisted cable in brown and cream colours) cable.

I also featured them in a Headphones in Pictures article – read it to learn additional details. 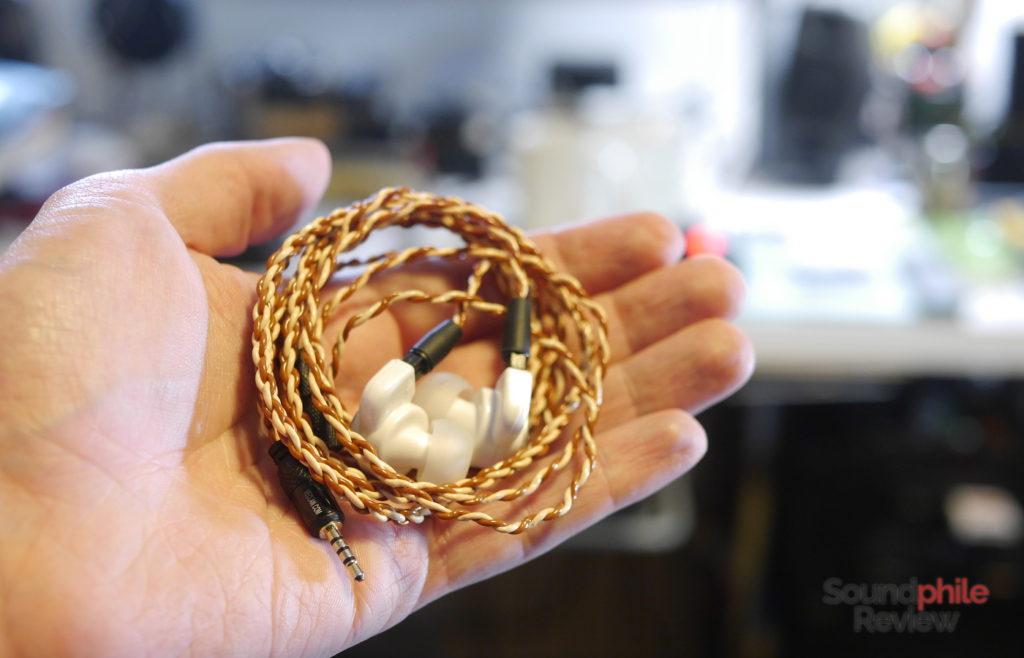 As the Venture Electronics Monk IE Smalls share the same design with the Biggie, I invite you to read the Monk IE Biggie review for a complete description of the headphones. The only difference – in terms of appearance – is the white colour used for the housings. 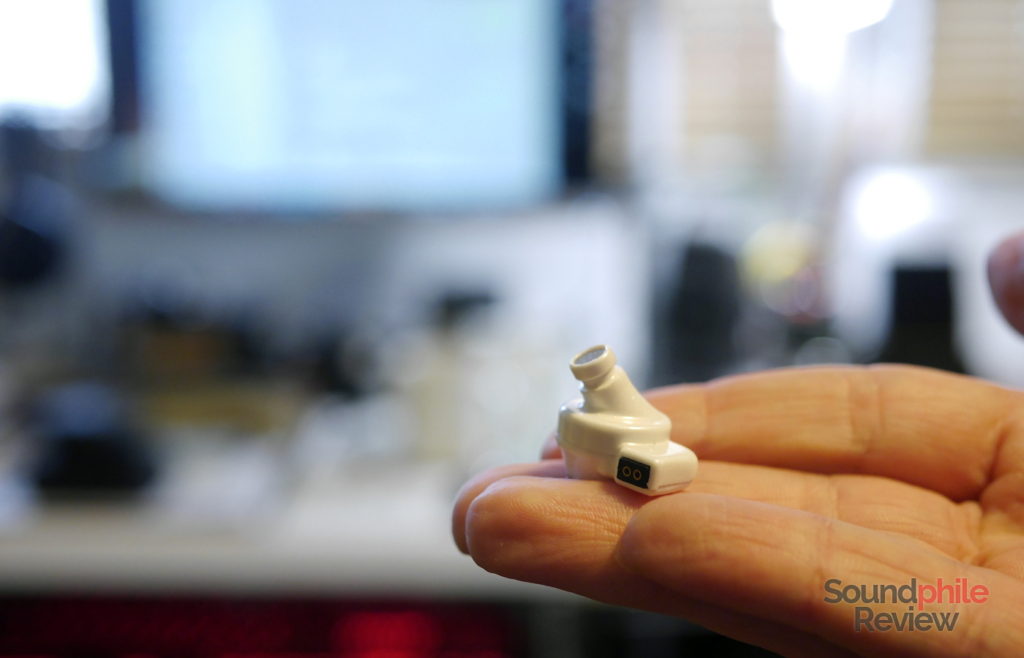 I have to note that, given the different sound signature, I found the Monk IE Smalls to respond differently to eartips. In fact, the Monk IE Smalls appear to be “more classic” than its bigger counterpart, keeping a somewhat balanced tuning even when using sealing eartips. Though there are slight differences when changing tips, I can safely affirm that it boils down to personal preference as eartips are not going to completely alter your sound.

Isolation is poor, even when using sealing tips; the Monk IE Smalls are not going to afford you total isolation and you will need to raise the volume in the noisiest situations (i.e. public transport). This seems an effect of the housings’ design, though other people may experience different things due to the inevitably subjective nature of this kind of things. 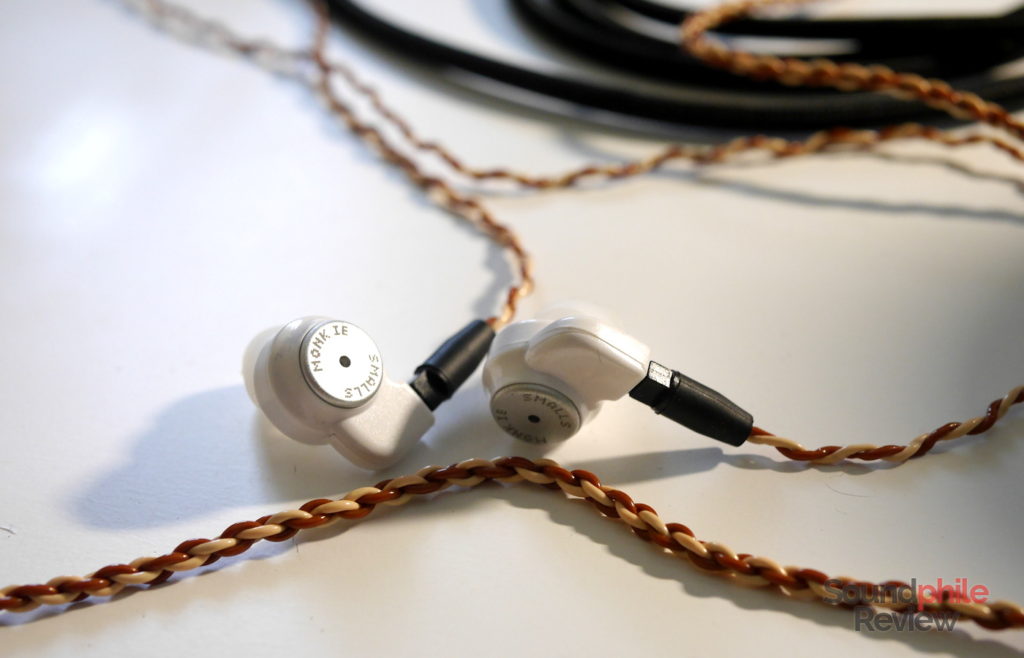 Before trying the Venture Electronics Monk IE Smalls, I had them run for 100 hours in burn in. I then listened to them using a Topping DX7 (both with single-ended and balanced outputs), a RHA Dacamp L1, an iFi nano iDSD Black Label, a Head ‘n’ Hifi Objective2 (using the DX7 as DAC), an Aune M1s and a Cayin N5ii. Lee sent me 2.5 mm balanced cables, so I could use an adapter to XLR4 to use the DX7’s balanced output (also using an iFi IEMatch2.5). Source files were mainly standard-res FLACs.

The Monk IE Smalls have both high sensitivity and low impedance: this renders them ideal for use with portable sources such as DAPs and smartphones. You can easily drive them with almost any source and some of them are actually too powerful (I had to use the Ear Buddy with the iFi nano iDSD Black Label, even though there’s the IEMatch output!).

There’s good clarity, though it could be improved – the Biggie are better in this regard. Instrument separation is fine, but there are especially dense situations where it can be a bit difficult to perfectly tell each instrument apart. Given the asking price, though, it remains remarkable. Soundstage is reasonably large, though it is easy to tell this is a closed-back IEM – there’s no sense of a large room where the musicians play, but rather a relatively wide front from which the sound comes without much depth or sense of space. Imaging is good enough, but limited by the soundstage.

Having bass in the spotlight seems a peculiar feature of the Monk IE line. The Monk IE Smalls feature somewhat elevated bass, especially in the mid-bass range, giving the sound as a whole a bit of added warmth and depth. Talking about depth, bass reaches satisfyingly deep and the Smalls are generous enough with sub-bass to let you feel it. Though not the fastest bass I’ve heard, it’s got decent speed and a nice texture; it has a nice sense of impact that adds movement to the sound. What’s most important, it sounds coherent and lively. Though more than neutral, it’s not untamed and “stretched” – it never overtakes the mids and always sits at the right place, though its presence is impossible not to notice.

Mids are actually a bit recessed, though not as recessed as on the Monk IE Biggie. As a result, acoustic instruments and voices appear a bit distant and leave you craving for more volume – I often ended up turning it up during my critical listening sessions wishing for a bit more power. Lower mids are prevalent and lend a warm character to the sound – on top of the added bass. Instruments such as guitars and pianos may benefit from this fact, while brass instruments and violins are not as bright as they should be. This is especially apparent in recordings such as the magnificent Sylva by Snarky Puppy, where wind instruments (and brass instruments in particular) are not as prominent and lively as they should. Mids are also fast and portray a good amount of detail, leading to sound being generally involving and pleasant.

Treble is right there with the mids, or just slightly behind (though by a very short margin). Though it’s not yet perfectly neutral, it’s almost there – it actually sounds natural and balanced. There is a good amount of detail, which is alas not going to show you all the finest microdetails, and extension is actually pretty good. There’s very limited sibilance, which makes the listening experience fatigue-less.

As for the genres the Monk IE Smalls works well with, I can say that they are pretty much a Swiss army knife: it won’t be perfect for each and every situation and it will leave you wanting for more or for something different that can do the job better, but it will work and it will leave you satisfied in the end. Though I listened to many different genres, I could not find one where the Monk IE Smalls sounded wrong.

Here’s a quick comparison with other headphones:

All in all, the Monk IE Smalls are a very satisfying IEM. They stay true to the philosophy of the Monk line – you can get competent headphones without breaking your wallet. And they’re really competent headphones in this price range. They may not have the same “wow” factor as the Monk Plus, but they’re definitely going to impress you.

Their overall balanced sound signature – though there’s emphasis on bass – makes them suitable for almost any genre and can meet most people’s taste. They boast good technical capabilities, too: bass depth, instrument separation, soundstage and imaging are all remarkable and I would not normally expect them in this price range.

These definitely are not earphones for the lovers of bright signatures or for those who like their bass tamed and quiet. But they’re capable and can afford you some fun for a low price. At $40, the Monk IE Smalls are solid in-ear headphones that have few flaws worth mentioning.

The Venture Electronics Monk IE Smalls currently sell for $40, though access is limited.