Sivga has made a name for themselves with competitively priced planar headphones and they are now expanding their line-up with new headphones. Among them are the Sivga Robin SV021, which apparently aren’t named after the assistant to the Dark Knight but rather after the European bird. They sport a dynamic driver and wooden earcups that look gorgeous, but are they going to sound anything like they look?

Disclaimer: I received this unit directly from Sivga. My thanks to Collin. The Robin SV021 retail for $149. Additional info is available on the official website.

Important: before publishing this review, I sent Collin a preview in order to rule out that I had a defective unit. He disagreed with my findings, which is fair, but he insisted that everyone else gave the headphones a positive review and so should I. If you read through reviews, you will find that most of them agree with my analysis, only to then diverge when it comes to conclusion: I say that this level of performance is unacceptable, others say that it’s up to your taste – something with which I disagree, given that there are glaring acoustic issues, stemming from the fact that Sivga took the Phoenix’s driver and just put it in closed-back earcups with very little actual tuning work. It is my duty as a reviewer not just to describe the product, but to also judge it so that you, my readers, can understand whether it is good or not. To renounce to this would mean to abdicate to my role as a reviewer, only to become an advertiser. After a long thread of emails in which I explained my position and why even a negative review is important, Collin asked me not to divulge this review beyond my own blog, effectively trying to censor me: he wrote “we hope you not to post this review on other places, as it may mislead customers who like this kind of sound quality”. I invited him to retract his request, something which he did not do. I am therefore forced to publish this information in the sake of transparency. Make of it what you wish. 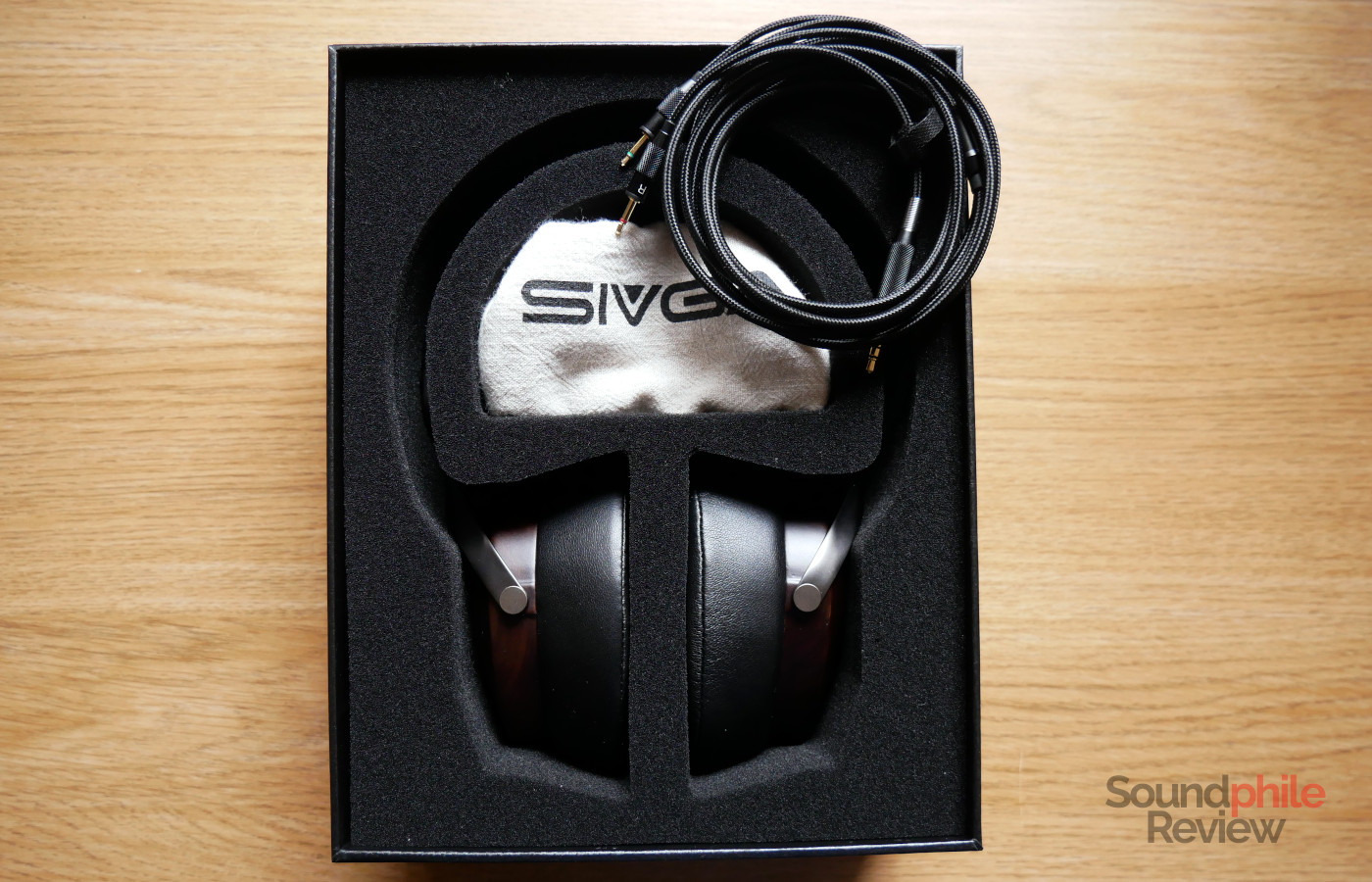 The Sivga Robin SV021 come in a box that contains the headphones, the cable and a string bag that look to be made of hemp – it’s quite soft and nice! Although not the largest accessory set, it’s enough to cover most needs. 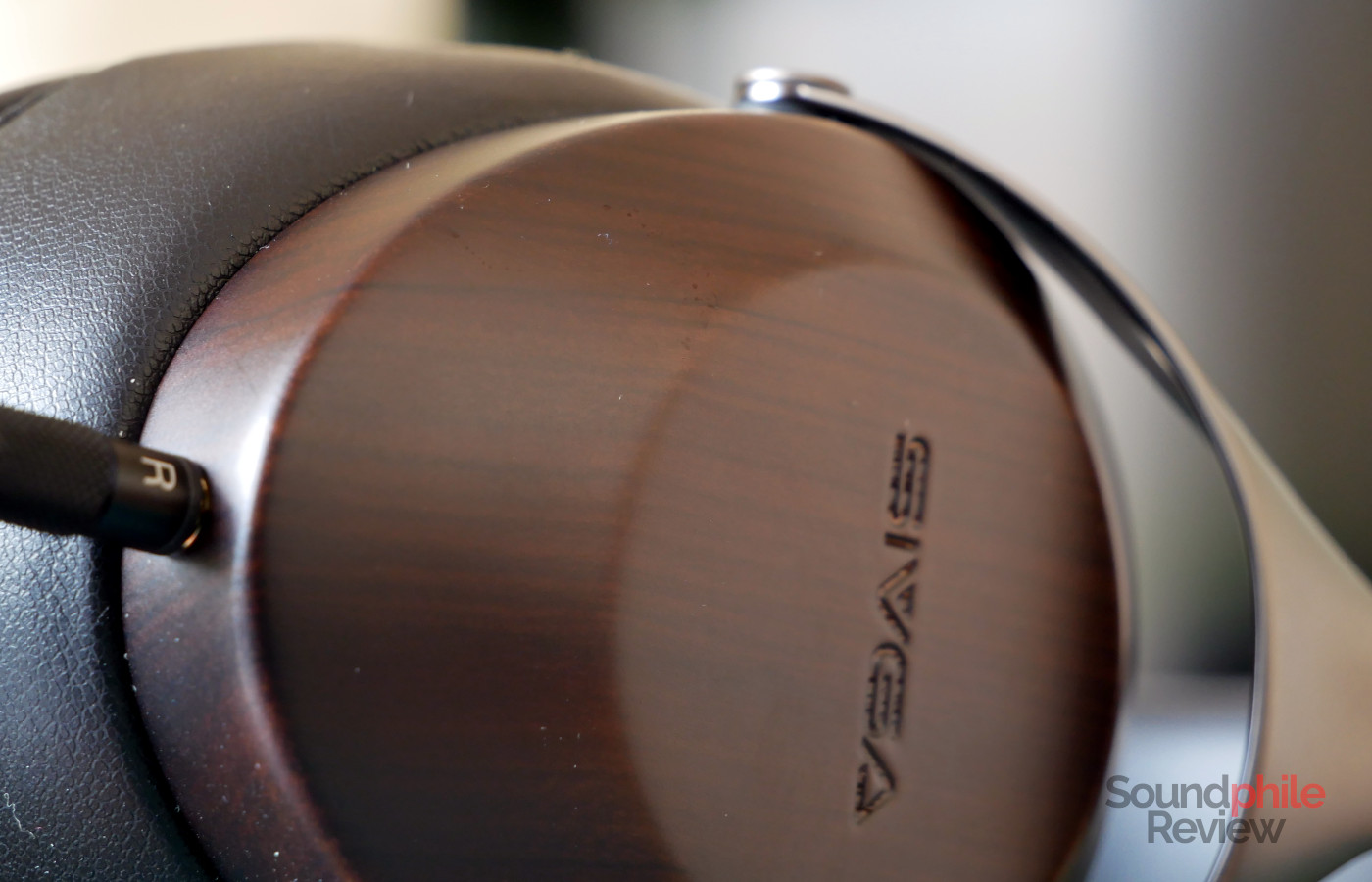 I quite like the simple design of the Sivga Robin SV021. The earcups are made of a dark wood with a matte finish (the company doesn’t disclose which wood it is), while the gimbal is made of metal with a gunmetal colour. The earcups have a inverted drop-like shape with the 2.5 mm jack sockets at their ends. The fact that the earpads and the headband are black, sewn with white thread, adds to the general dark appearance of the Robin SV021 and this lends them quite some elegance. I find them to be rather beautiful, actually! 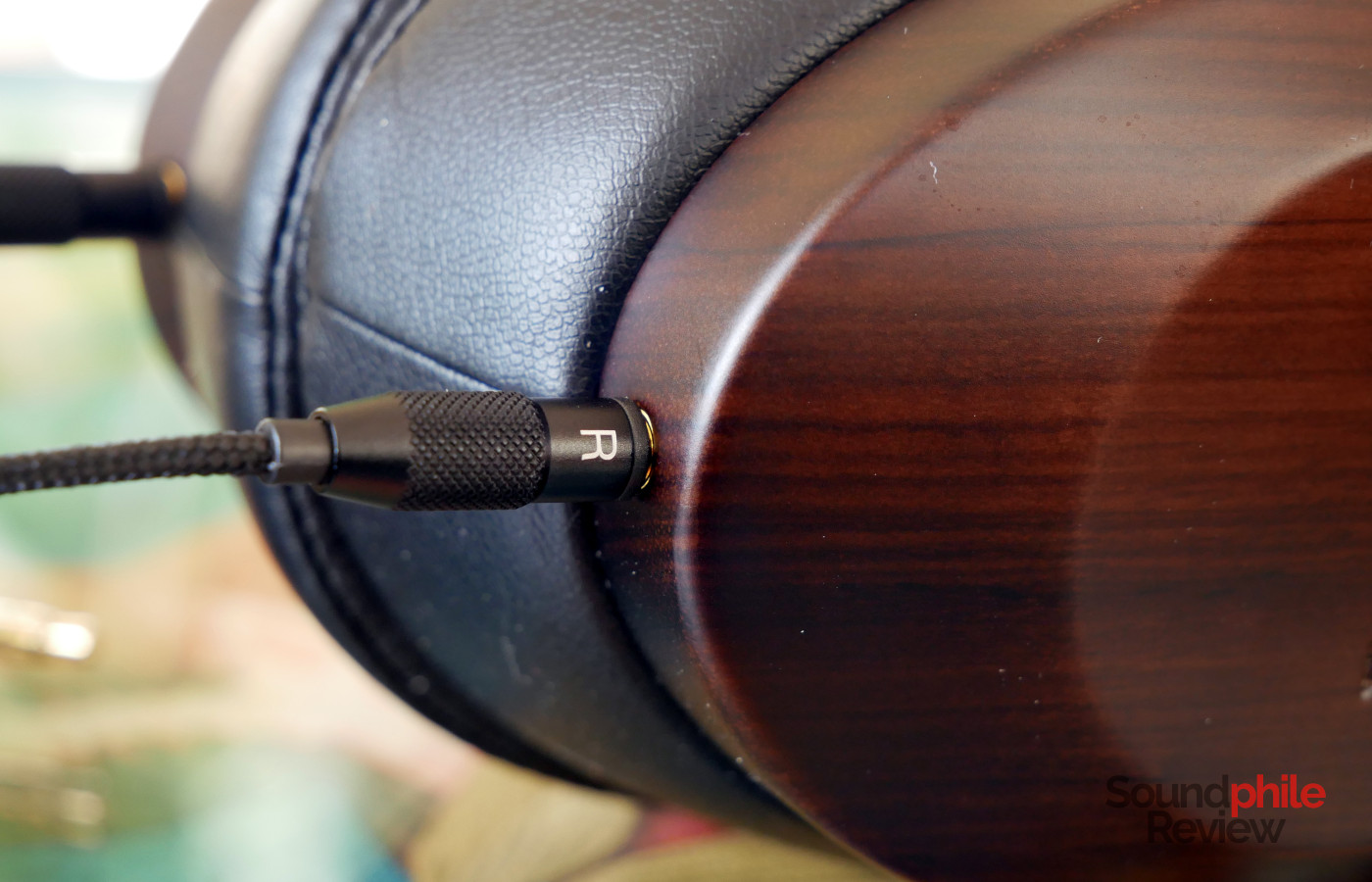 I find the Robin SV021 to be built quite well, with no creaking whatsoever nor other sign of problems in the way they’re assembled. The only issue I can see is that the earpads are not easily removed (I couldn’t do it at all, truth be told). There are clear steps when adjusting the size and the sliding is easy, but not so much so as to make the headband move inadvertently. 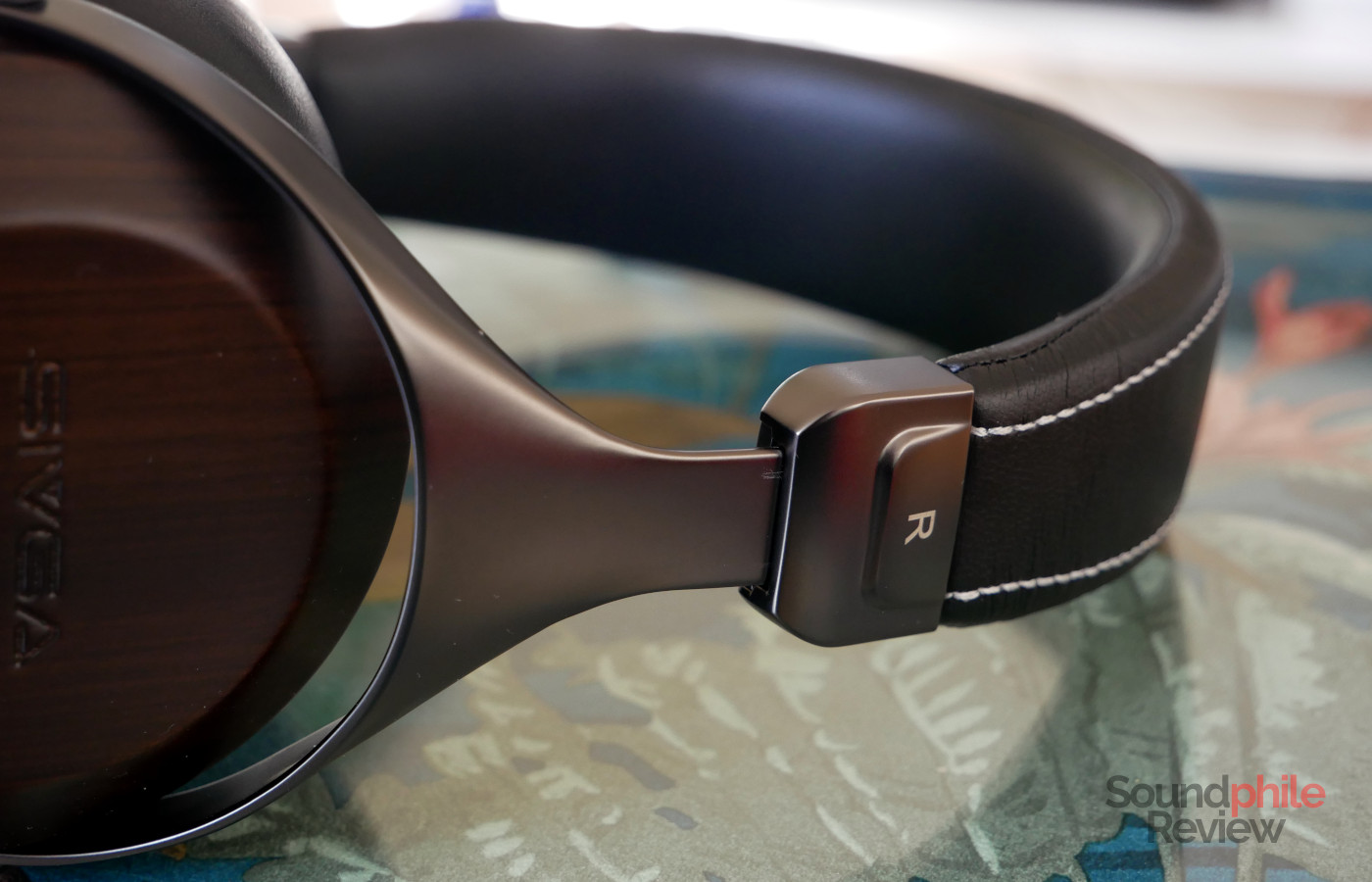 Although the padding is quite generous, it is also extremely soft and therefore it compresses quite a bit, sometimes leading to my ears touching the inner grill that protects the driver. That, in turn, creates some discomfort on the long run. Thankfully, though, that happens rarely and most often the Robin SV021 are quite easy to wear for prolonged sessions. The light weight (267 g) makes it so that despite the almost complete absence of padding on the headband, the headphones stay relatively comfortable relatively to the scalp even after a couple of hours, which is quite an achievement (my scalp is extremely sensitive, unfortunately, so I am forced to be a harsh judge when it comes to comfort). 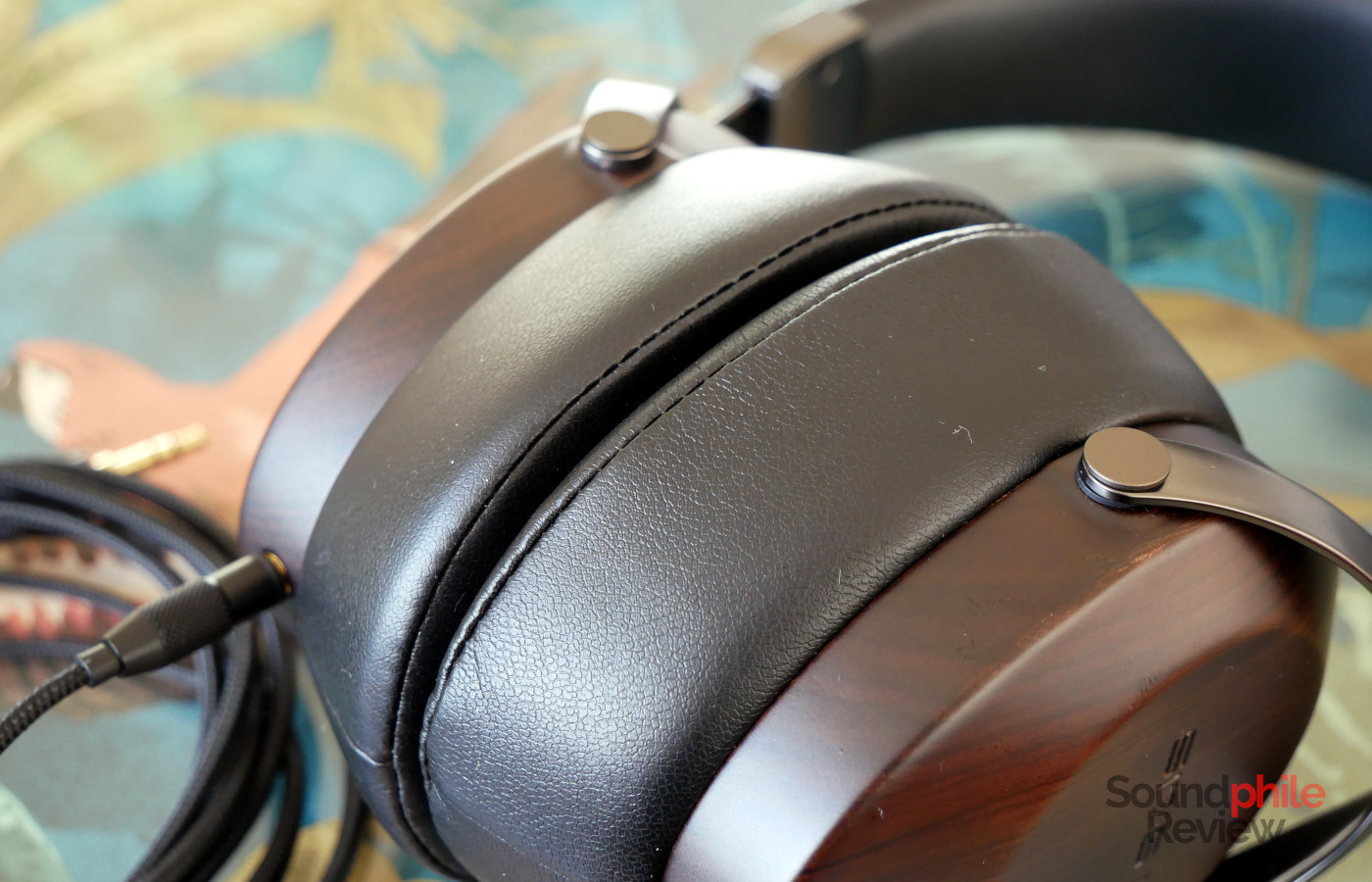 Although these are closed back, isolation is limited and I can still hear myself typing on my (relatively) silent keyboard, so any louder noise will still be clearly audible. 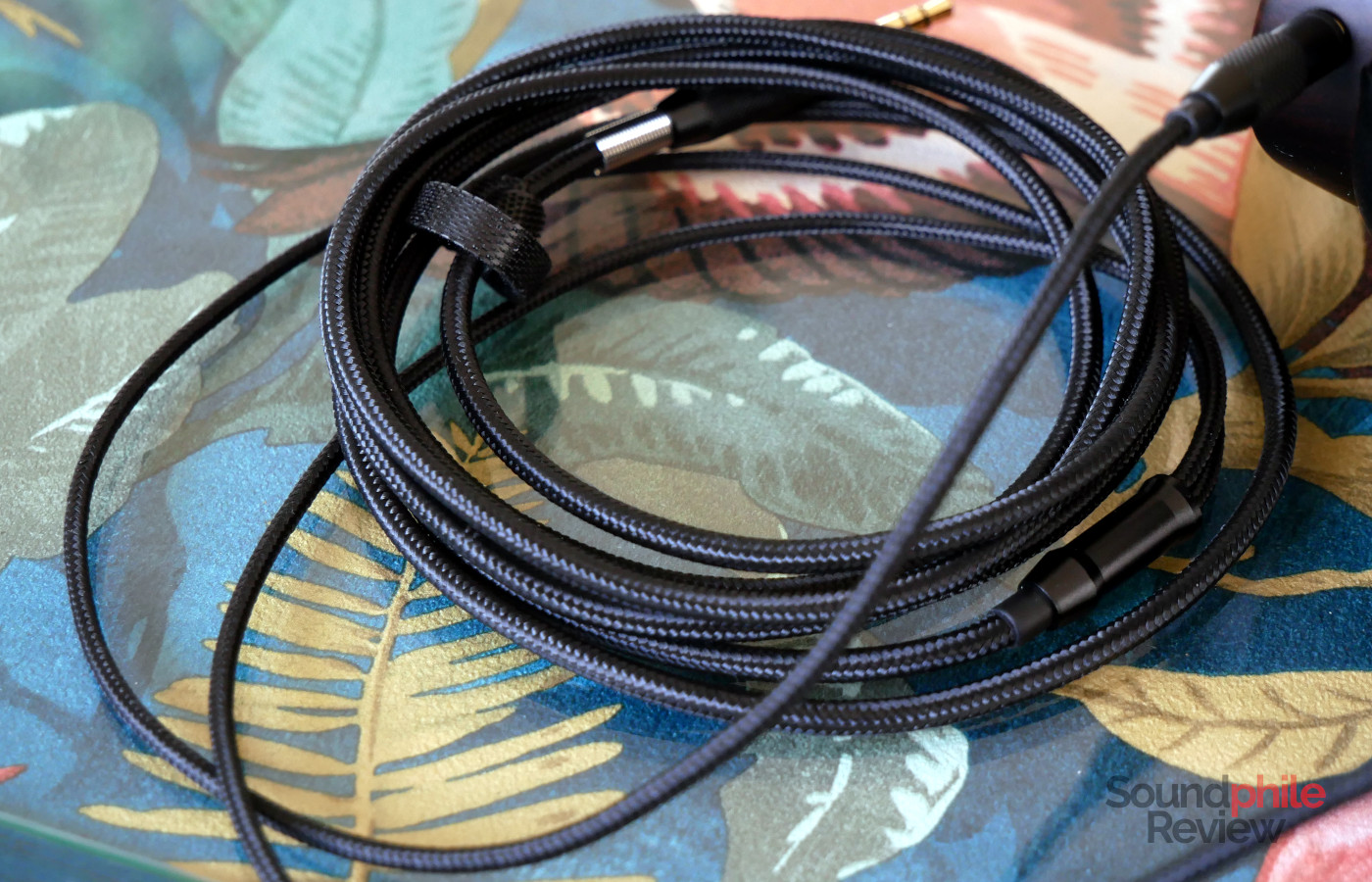 The cable is actually quite nice: the jacks at both ends have metal housings which are machined so that it’s easy to pull out and push in them. The 3.5 mm jack also has a spring as a strain relief, while the Y-split is made of metal, too. The cable itself is covered with braided fabric which is soft and malleable. Overall it’s a very nice stock cable.

I listened to the Sivga Robin SV021 using a Shanling UP5 and a Drop THX AAA 789 driven by a Topping DX7. Music files were mostly CD-ripped FLACs.

Collin at Sivga introduced the Robin SV021 to me as “neutral and balanced”. It is crystal clear that they are not and, in fact, they are far from being neutral, with a heavily V-shaped signature that sees an overpowering bass section counterbalanced by an aggressive treble area. This is all produced by a 50 mm dynamic driver made of polycarbonate and fibre.

Soundstage is quite small, even for a closed-back model, and it feels like the instruments are really close to the listener and they’re in a very small space. Imaging is not quite there, as it’s really hard to place the instruments on the stage if they’re not all to the left (or to the right); if they are not entirely on the right (or left) hand side, they then sound as if they were around the centre, instead of sounding like they are in any specific position in the left-right spectrum. Instrument separation is not quite sufficient, as instruments appear to have no room to breathe and end up sounding like a hodgepodge of sounds.

Bass is the main issue in the Robin SV021’s signature. It is physical, which is quite good, but then it is way too overpowering, meaning that it ends up covering almost everything else. It surely leaks over the lower mids, making them almost disappear, and this in turn creates balance problems for the whole signature. There’s at least a 10 dB emphasis on the whole bass area, which is massive, and it’s even more when we consider that midrange is recessed. Detail is quite decent actually if the track allows it: bass performance is in fact quite dependent on the track, as those which already have a strong presence tend to expose its issues more and therefore lead the details to disappear, whereas tracks where it’s more subdued sound fine.

The last sentence of the previous paragraph can be also applied to midrange: if you take two tracks from the Master and Commander soundtrack, The Battle and La musica notturna delle strade di Madrid (one of my favourite tracks by Boccherini), you can clearly hear how the latter track sounds more vivid and with the various string instruments being portrayed front and centre, while the former track is a mishmash of sounds where the drums overpower everything else. In general, anyway, midrange has a lot of issues: there is a massive drop in the lower area, followed by a steep rise in the upper one that makes it quite unbalanced. Detail is fine, as long as there’s little bass playing – otherwise it gets lost in the mix.

Treble is quite aggressive as there are multiple peaks: I can point to at least two, one around 5 kHz and the second around 8 kHz (give or take). These two together make instruments quite harsh and fatiguing. Even though detail is fine, it ends up being lost due to the fact that highs are piercing and not quite pleasant to listen to. Extension is fine, with the upmost frequencies being possibly even too present.

At this price point there are gazillions of competitors, but we’ll focus on the two most significant ones: the Sennheiser HD 6XX and the Meze 99 Classics/Noir. At $220, they’re close to 50% more expensive, but the difference is way too large to ignore. The HD 6XX are just way more balanced: their bass is not overpowering and it’s faster and more detailed; midrange is actually coherent and not disappearing due to bass, as well as more detailed; treble is not piercing and, on the contrary, many believe it should be more emphasised, but it’s still well done and without fatiguing peaks. Soundstage is wider, which is almost obvious given the HD 6XX are open back, but imaging is where the largest difference is as it’s actually accurate and allows you to place instruments on the stage, while instrument separation is good enough to allow you to distinguish the various parts.

On the other hand, the Meze 99 Noir are sold on Drop for $200 and they slay the Sivga Robin SV021. Although they’re far from neutral, they are still balanced and lack the overpowering bass and treble, leading them to be a much safer (and saner) choice. Bass is as deep as on the Sivga, but it’s not as emphasised and it’s quite cleaner and clearer; midrange is more present in the mix as well as more balanced; treble is much less emphasised, though it’s still quite present. Detail is better throughout the whole spectrum, while soundstage is wider, imaging has much better accuracy and instruments are actually separated.

Although the Sivga Robin SV021 are quite nice to look at and to wear, thanks to a very appealing design and to plushy padding, their acoustic performance leaves a lot to be desired. While they do have their positives, they have a few glaring issues that can’t be overlooked. It’s the bass and treble especially which are problematic, as they shoot way above levels that I deem appropriate with multiple peaks that result in harshness and fatigue. The Japanese word “bakkushan” (also spelt “bakku-shan”), which I used in the title, indicates a girl who looks beautiful from behind, but then she looks ugly when looked at from the front: although that’s not quite polite (and I only use it jokingly: no offence to anyone is meant!), it seems to be an apt description for these headphones that look good, but then don’t quite sound okay.

Although they are affordable at $149, that’s still a price that needs careful consideration before taking any decisions. For that reason, because of the fact that the Robin SV021 are going to be ideal for a limited range of genres, and because there are better options at comparable price points, I do not recommend getting these headphones unless you have a chance to audition them with the music you like and you are going to be entirely certain that you will like them. If you like heavily V-shaped signatures you might find these to your taste, but otherwise you will probably find them not to be quite your cup of tea.

HiFiMAN HE6SE v2 review: the beast and the beauty