“The music of the heart comes from the Sabbat”. That’s what the packaging says, and I think Ozzy Osborn and Tony Iommi would agree with that. Jokes aside, Sabbat made a splash in the TWS world by offering competitively-priced earphones that sound good. The Sabbat E12 Ultra are an evolution of the E12 which offers a more balanced signature – quite a nice addition given the E12 was a bass cannon.

Disclaimer: Linsoul provided this unit free of charge. They sell the E12 Ultra for $79. 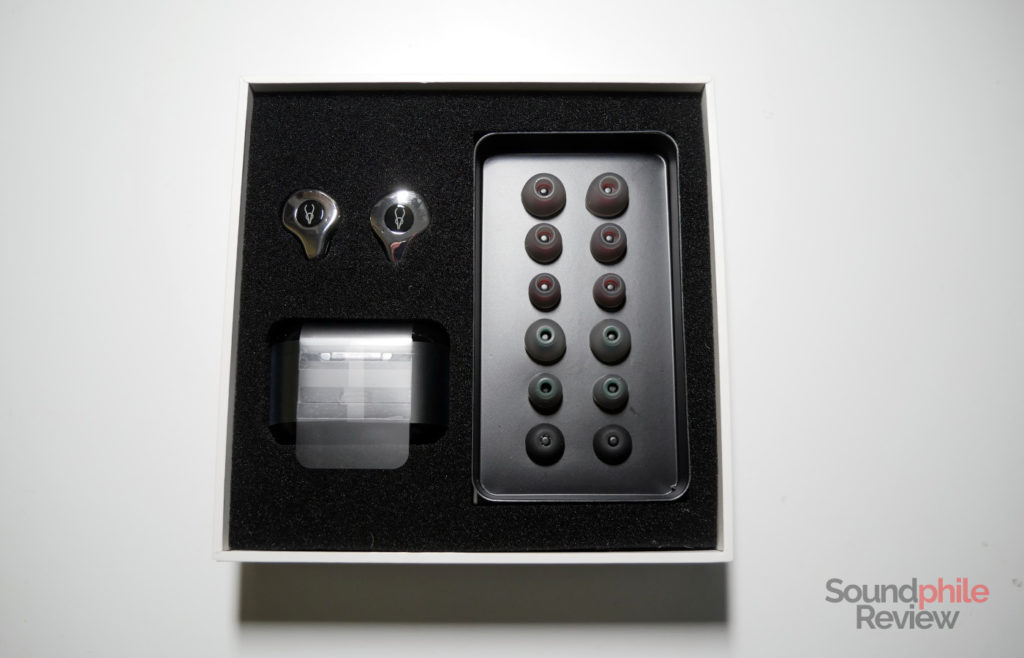 The packaging includes a wide variety of eartips: there are in fact six pairs: three different sizes with two styles, one with hard inner bore and the other with soft inner bore. There’s also a fabric bag to carry the case. The earpieces of the Sabbat E12 Ultra are quite unusual in their design: the general shape is odd, almost similar to that of custom IEMs. Of course the nozzle is quite different and it’s in fact quite thin. The faceplate actually extends on to the sides and is made of plastic, coloured silver on my unit, while the rest of the shell is made of black plastic. There are two metallic pins above the nozzle which are used to charge the earphones. 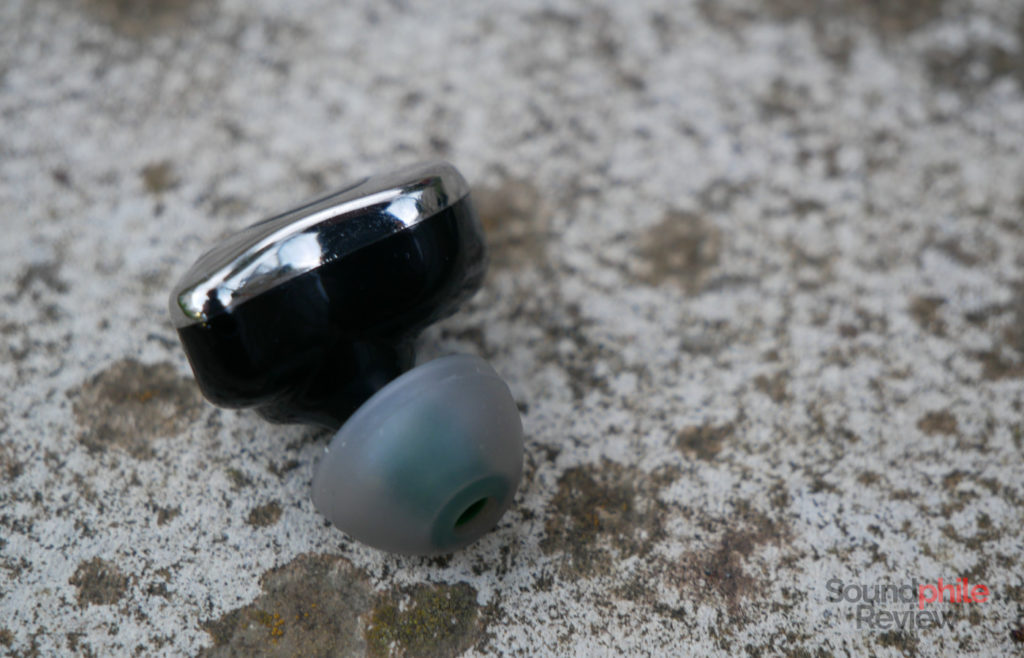 There is a physical button at the centre of the faceplate of each earpiece. Thankfully they’re quite easy to press, so one can press them without actually piercing their ears. 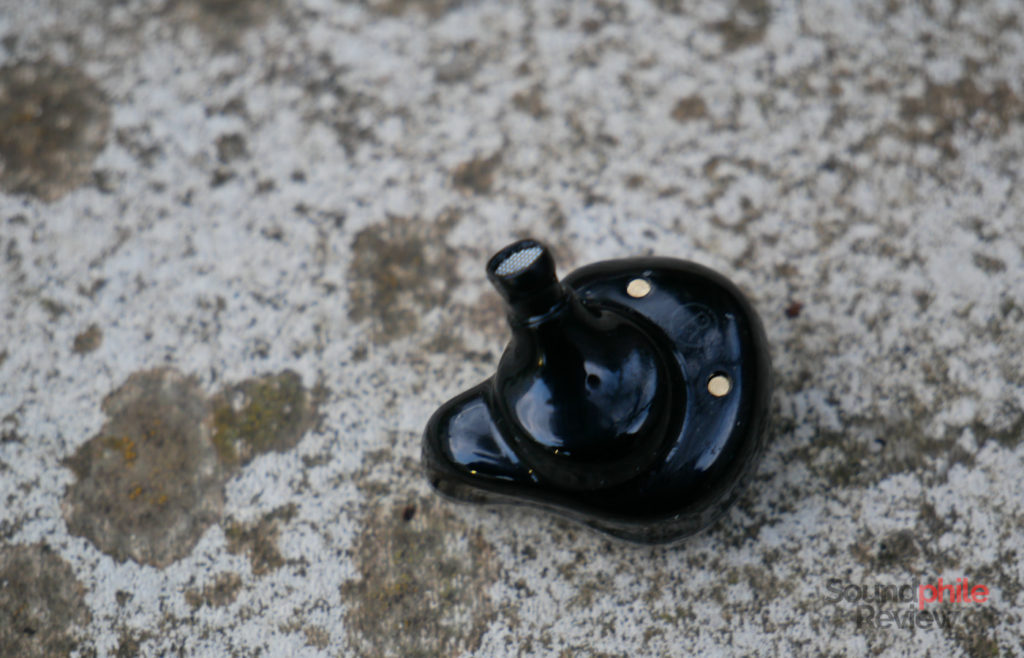 Despite being relatively large, I found the Sabbat E12 Ultra to be comfortable for the first hour. Their curved shapes allow them to fit into my ears without pressing on any single part of the ear. After a while, though, the large size becomes more of an issue and causes some pain. Quite unusually, I had issues with the nozzle pressing against my ear canal and causing pain. The peculiarly small nozzle also makes it quite difficult to replace the eartips and to find more comfortable tips than the stock ones.

The case-dock is so small it is just a bit larger than the two earphones. It’s easily pocketable and light, too, so you won’t feel its presence in the trouser pockets. Alas it has a very glossy finish which I fear is easily scratched, but thankfully a carrying bag is provided and that should avoid most damage. Both the USB-C port and the status LEDs are on the back of the case; the LEDs are four and indicate (roughly) the charge left on the device. Alas there are some issues with build quality: the USB-C port is off-centre and requires quite some force for the USB cable to be inserted. The Sabbat E12 Ultra support the Bluetooth 5.0 standard with the aptX codec on top of the usual SBC. This additional codec should allow for better audio quality, so it’s a welcome addition. There’s no mention of the AAC codec which would work with Apple devices, though.

The range is quite good and I was able to walk around with no interruptions or stuttering. The connection is quite stable and among the strongest I’ve found in TWS earphones.

I found no way to activate any feature other than play and pause with a single click of the button – all other clicks do nothing on my devices. 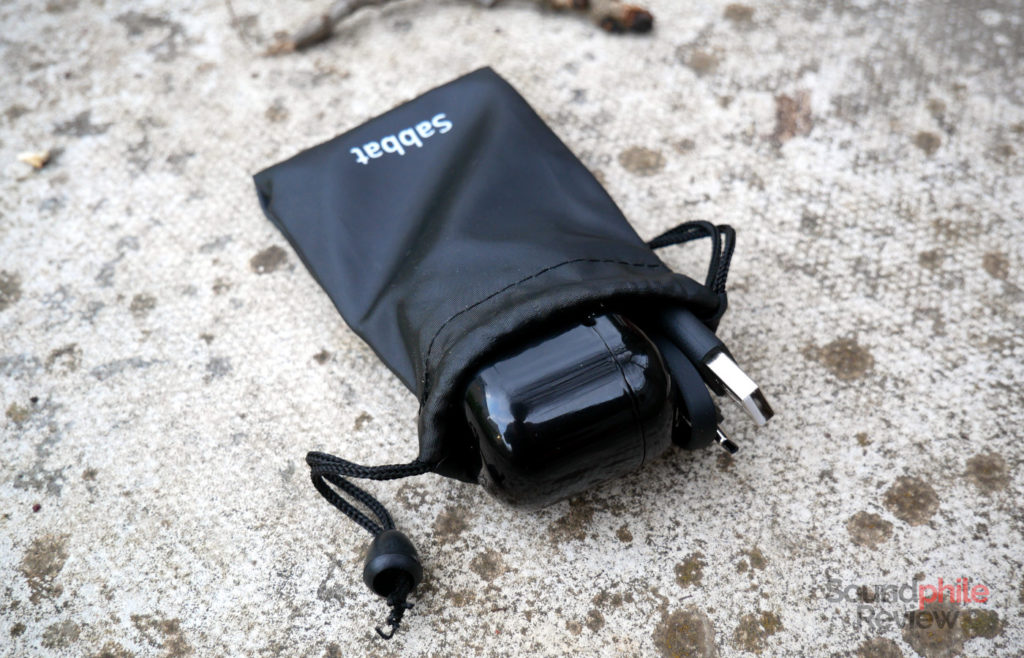 The earbuds connect automatically when you take them out of their cradle and are automatically turned off and charged once you put them back. Speaking of charge, the cradle can also be charged using Qi wireless chargers, so true wireless has an entirely new meaning!

Battery life is very decent, being about 6.5 hours on a single charge. The case offers more charges, as it usually happens with these earphones, and it provides four additional charges for a total of about 30 hours of overall battery life.

I used the Sabbat E12 Ultra with a couple different sources: a HiBy R5 and a FiiO M9. I used the same microSD card on both devices, mainly loaded with FLAC files in 16 bit / 44.1 kHz.

The Sabbat E12 Ultra puzzle me quite a bit. There is a very strong background hiss that actually covers the music if you don’t listen to music at very high volume. More quiet tracks, such as False Dawn by Miktek, are dominated by the hiss. This would normally speak of a poor implementation of the amplification stage. The thing is it’s not consistent. Sometimes I can clearly hear it, sometimes I can’t. I haven’t been able to pinpoint the exact cause of this behaviour as it seems quite random.

The Sabbat E12 Ultra have an otherwise pleasant L-shaped frequency response which is relatively well done, with no single part being so emphasised it covers the rest, though on the other hand treble is recessed enough it’s lacking. There’s a single 10 mm driver to handle everything.

Soundstage is not really wide, but enough to make the sound not feel cramped. Imaging is decent, though the central position is not exactly accurate; each instrument has its own well-defined place, though. Instrument separation is lacking and tracks often become a bit of a mesh.

Bass is certainly powerful and more abundant than lovers of neutral tunings will like. It’s still quite enjoyable as it adds a bit of colour to the lower area without actually exceeding with that and while keeping a tuning that approaches neutrality from above. Despite the E12 Ultra using a 10 mm dynamic driver, it doesn’t offer that punch and physicality that dynamic drivers often offer. Bass is surely enveloping, though, and gives music more livelihood as it’s also decently fast. There’s not really much detail here: it’s sufficiently detailed, yes, but it barely goes beyond that – the texture is not really superbly done.

Midrange is a tiny bit recessed, but still quite easy to reach and never distant. It’s well balanced, too, without significant bumps in the upper region but with a small emphasis on the lower area. All in all it’s a relatively warm signature that’s highly enjoyable and works well with most genres and tracks. There’s also a good amount of details there which allow one to hear all the various instruments with good accuracy. Again the physicality is limited.

Treble is anything but extended, and actually appears to be lacking. It’s recessed and barely present in the mix. It’s not really detailed, either, and being recessed definitely does not help with hearing the details. In short, treble is alas the weak point of these earphones and the main failure in its tuning.

At the time of writing this review I only have the 1More Stylish True Wireless with me, so this is the only comparison I can give you. The Stylish True Wireless have a more balanced tuning which includes less bass presence, less recessed midrange and more present treble. It’s much more pleasant and better for a wider variety of genres. The soundstage is comparably wide, but imaging and instrument separation are better on the 1More.

If you are after warm, bass-centred “true wireless” earphones then the Sabbat E12 Ultra might be for you. These earphones offer a large bass presence with little treble, so they may be good for treble-sensitive people. Still, we’re far from wired counterpart in terms of sound quality: the similarly-priced Shozy Form 1.1 offer much better quality and actually cost less. These considerations aside, the E12 Ultra offer a good experience thanks to their long-lasting battery life, high-quality codec compatibility and very good Bluetooth range. In short, they’re good for a no-frills listening experience while out and about.