KZ continues the expansion of their product line-up with new earphones that come with unintelligible names. The KZ E10 is a bulky take on the “true wireless” trend which however comes at a much lower price than the competitors while offering good-enough performance.

Disclaimer: this is a sample Linsoul sent me free of charge. The E10 retail for $40.

The KZ E10 is sold in a cardboard box which holds the earphones in their case, plus a USB to USB Type-C cable and three pairs of semi-transparent white silicone tips. 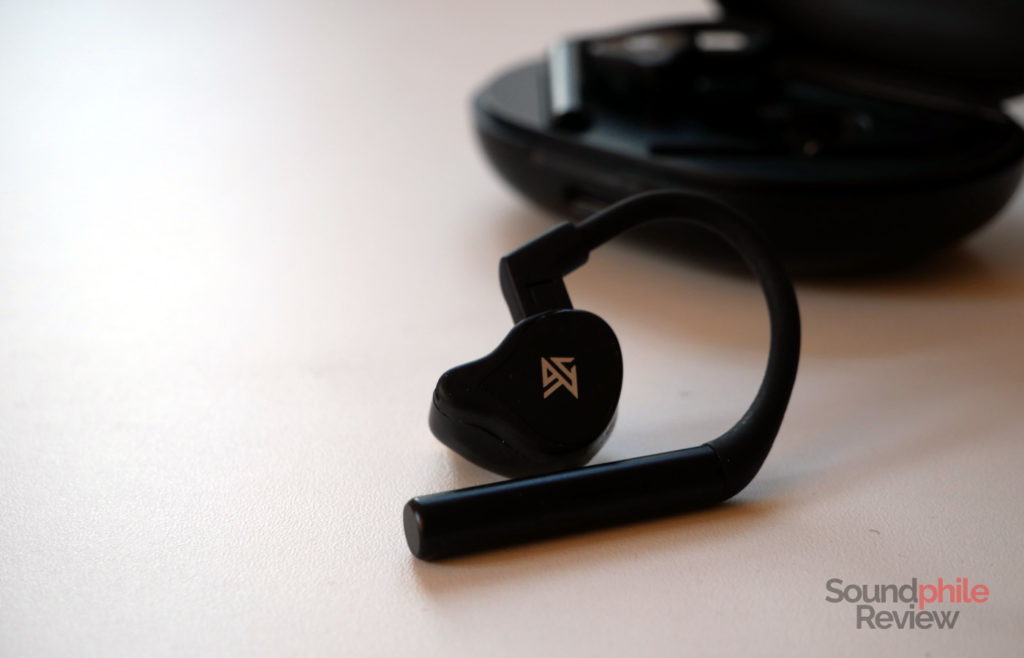 As far as TWS design goes, the KZ E10 are pretty outlandish. They’re larger than most products on the market right now and they’re similar to other odd-looking products such as the Fostex TM2. Contrary to those, though, the KZ E10 design is not justified by the earpiece being detachable from the rest, nor from the battery being in the earhook. The earphones are in fact a single piece that can’t be separated, which in my opinion is a missed opportunity. I would have preferred if KZ had kept the shells separate from the “true wireless” part as that would have justified the bulk and it would have allowed for greater flexibility. Moreover, the battery is still inside the shell, which begs the question of why KZ chose to include the large earhook. The setup is good as it is, I’m just saying it could have been more flexible. 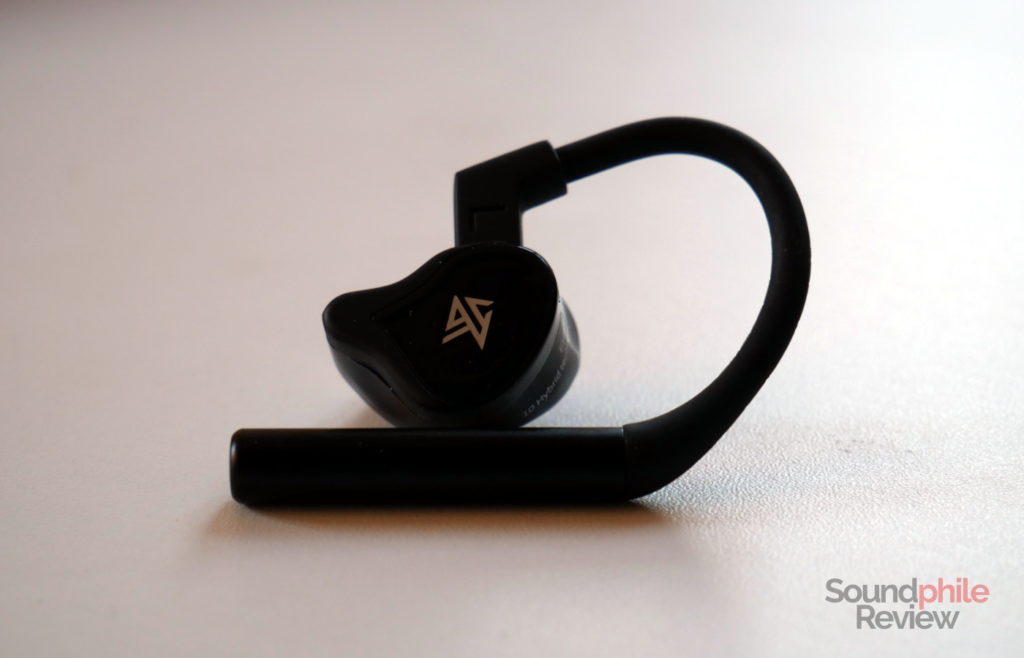 In terms of shape, the KZ E10 are similar to the KZ ZS10 Pro or KZ ZSN, with the main difference being the presence of a “wing” on the upper region that faces the ear. The faceplate is made of plastic and has what appears to be the new KZ logo; that’s also the part that is sensitive to touch and is used to control the earphones. Just above the nozzle, which is made of metal and has a large lip, are three metallic contacts which are used to charge the battery in each earpiece.

The shells are made of plastic, just like the earhook. The only part made of metal is the end of the earhook. The plastic being used is of decent quality, though, so there are no complaints on this front. The earhook is covered in rubber or silicone in order to grant better comfort. The earphones are built decently, just like you would expect out of KZ products. 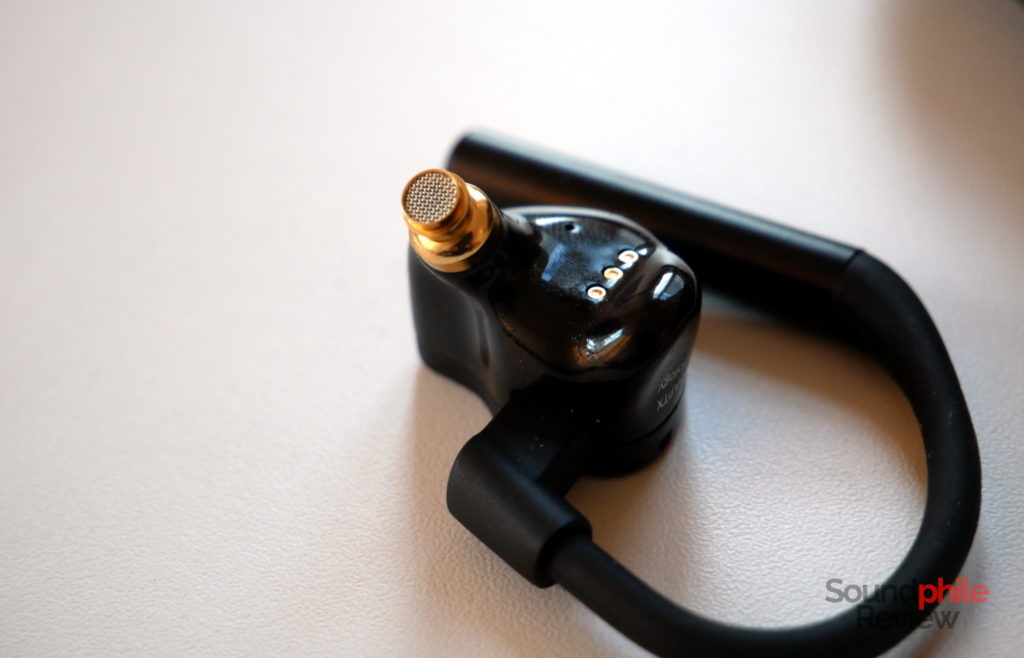 Comfort is actually hindered by the presence of the hooks: in my experience (and I stress this: take my words with the proverbial pinch of salt), the KZ E10 become fatiguing after just half an hour due to the hook pressing on the ear and to the “wing” on the shell. It takes a while to find the correct position, and even then comfort lasts for about an hour.

Isolation is limited unless you use foam eartips. Even then, the KZ E10 aren’t what I would use in noisy situations such as commuting on public transport. They’re fine on streets that aren’t too busy and in other situations with mild noise. 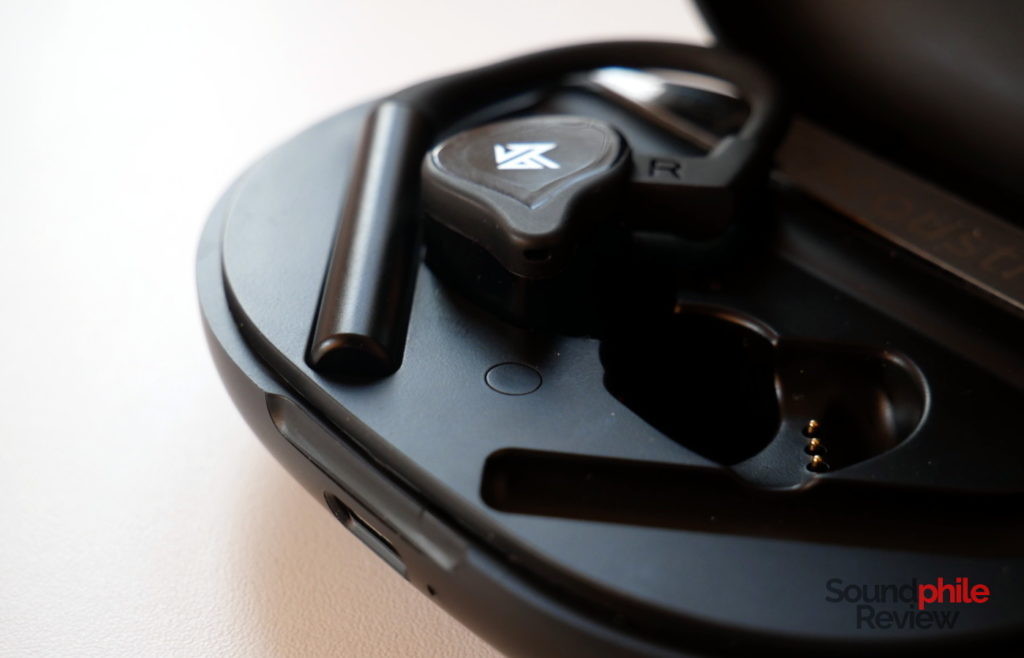 The case is the largest I’ve ever seen for TWS earphones, and that’s because the earphones have to fit in it. It won’t fit in your pockets, unless you have gigantic pockets. Since they are large, the case is large too. In order to make them fit they are placed in reverse order, so the left earphone is on the right and vice-versa. In the middle is a button that allows one to put the earphones in pairing mode (yes, that’s odd: earphones have to be in the case to be paired to the selected source), plus a status LED.

The KZ E10 use a QCC3020 chip which enables Bluetooth 5.0 with the aptX codec on top of the usual SBC. While the presence of a high-quality codec is very welcome, connection quality, alas, leaves much to be desired. It seems like this is one of the early manufactured units which have connectivity issues; later units could be better. I tried them with multiple devices, and the only one which worked well was my smartphone, a Honor 9. With all others there are constant stutters and interruptions, with frequent disconnections too – even when the source is on the desk or in a pocket. I don’t know where the issue lies, but my experience with the KZ E10 is not really positive on this front, not to mention the pairing process failing randomly.

The pairing process has in fact to be initiated by pressing the button inside the case. This unusual setting would be perfectly fine, if it always worked. The case often just shuts down when I hold the button pressed for three seconds as suggested by the manual, or the earphones do not turn on when I open the lid and do so when I initiate the pairing process.

It seems like KZ designed the earphones to be both paired to the source and to switch the active one between the two (there’s a master earpiece and a slave one). While this could be an effective method to have equal battery drain on both earpieces, in reality this is not flawless as the switch takes half a second – half a second which is silent, de facto interrupting your music. This happens constantly, every few minutes, so it ends being a nuisance.

I have also had the right earpiece constantly refusing to turn on (or to connect to the left one anyway), thereby leaving me with just the left channel. Hardly the ideal outcome of a device which relies on Bluetooth connection in order to work. There’s also no way to turn it on or off manually to reset it.

There is no volume control in the earphones. Some sources allow for better adjustment than others, but with every single one I’ve tried there was one consistent issue: the lowest volume was still too high. My estimate is that the lowest volume is around 75 dB, which is fairly high in a silent environment (louder than the average hair dryer). And even though one sets a lower volume for media, status messages (e.g. connection/disconnection) are always playing at the highest volume, which is deafening. It’s so high you can clearly hear the “power on” message when you open the case, half a metre away!

The microphone can’t correctly capture the voice unless one takes one earpiece out of the ear and places it in front of the mouth. That’s an inconvenience which however also allows one to stay aware of their surroundings, so one may deem it a feature rather than a bug.

The charging case has a 1.100 mAh battery. Compare this to the 30 mAh capacity of each earphone, and this brings us to a total of almost 20 charges. I haven’t been able to empty the case’s battery, if this is of any indication of how massive the charge is compared to the needs. The KZ E10 offer around three hours of battery life, which is a bit disappointing given the very large footprint. This is a direct result of a design choice, though, as the battery is still limited in size due to the physical constraints of having to fit it into the shell. Alas the battery dies without warning. You’re listening to music and boom, the earphones don’t play it anymore. You wonder whether you did something wrong, but no – it’s one of those “it’s not you, it’s me” situations so the earphones just leave you in the dust.

I tested the KZ E10 using various equipment as sources, including a Shanling M2X, a HiBy R5, a Honor 9 smartphone and a Honor X2 tablet. Due to the issues with connectivity I already mentioned, I ended up using my smartphone as the source.

KZ tuned the E10 to imitate the tuning of the KZ ZS10 Pro, which is a very good new as that is among the best in their line-up, but there are some differences. The tuning includes emphasised bass and treble which lead to a moderately V-shaped signature.

The soundstage is rather large for closed-back earphones and extends mostly laterally, as there is little depth. Imaging is surprisingly good though, and places instruments with good accuracy on the stage. Instrument separation is also good, as instruments are separated from each other clearly enough for one to be able to discern them.

There’s a clear emphasis on bass, but I find it not to be excessive as bass never leaks over the midrange. In fact bass lends warmth to the sound and appears to be positioned in the front row, but it’s always controlled enough. The emphasis is concentrated on the mid-bass region and makes the KZ E10 display bass almost ahead of midrange. Detail is limited, but it’s there, though this means there’s a limited feeling of texture. The relatively large dynamic driver lends some physicality to impacts, though it doesn’t allow for great depth as the lowest notes are out of the E10’s reach.

Midrange sits in the middle (I know, right?) between the emphasised bass and the emphasised treble, but unlike many V-shaped tunings I’ve heard, it doesn’t sound recessed or distant. There’s a bit of emphasis on the upper region, but it is however limited so it shouldn’t pose too much of an issue. There’s a good amount of detail, as you can hear in Daft Punk’s Giorgio by Moroder where all the guitar and keyboard lines are well-detailed, not to mention the voice of Moroder. Midrange doesn’t have the same physicality as bass, possibly due to it being produced by balanced armatures.

Treble has little extension and a moderately large emphasis on the lower range, which makes it a bit fatiguing in the long term. It also doesn’t sound entirely natural due to this emphasis. There’s little extension, too, which also doesn’t contribute in rendering this area well. There’s a decent amount of detail, but it doesn’t stand out as particularly convincing to me, possibly due to the perceived unnaturalness.

Let’s compare the KZ E10 with other “true wireless” earphones:

There’s people saying that the only thing that matters is sound. I couldn’t disagree more. Headphones with incredible sound but shoddy connectivity are useless, and that’s the case at play here. The KZ E10 have mostly been a cause of frustration to me. Yes, their sound is enjoyable, but the constant issues with Bluetooth often made me frustrated enough to want to skip this review entirely. Between constant disconnections, the right earpiece not working and the inability to set the volume, the KZ E10 are far from being the best TWS earphones I’ve tried from a functionality standpoint. In terms of sound they’re quite good, especially given the price, and they’re among my favourite TWS earphones from this perspective. I sincerely like them and would like to recommend them, but it turns out that what you don’t pay upfront you could end up paying in terrible Bluetooth connection – which ultimately led to them being incredibly frustrating in my case.

I hear that the newer batches do not display these issues, as pointed out by other reviewers such as Audiofool – that’s the reason why I gave these earphones “6-“.