Nothing is newly-founded company that came out of… Wait, let’s start again. There’s a new company called Nothing and they’ve been able to generate a lot of buzz despite having so far shown us… You know what? There’s this company that was founded by Carl Pei, of OnePlus fame, and is backed by a lot of important people in the tech world. They have a silly name that’s probably going to be a nightmare for their SEO, and which lends itself to a whole lot of puns. Their first product, engineered together with Teenage Engineering, is the Nothing ear (1) (yes, spelt like that). The introduction is done, Nothing to see here, move along. (sorry, I told you it lends itself to puns and I just can’t hold back)

Disclaimer: I received this unit from Nothing. The company, yes. The ear (1) retail for $99 and will go on sale on the 17th of August 2021 on the official website.

The Nothing ear (1) come in a packaging with a luxurious appearance: there’s an outside box with a pearly black finish which contains another box, this time coloured silver, inside of which are the earphones in their charging case. Accessories include three pairs of white silicone tips as well as a USB to USB-C cable. 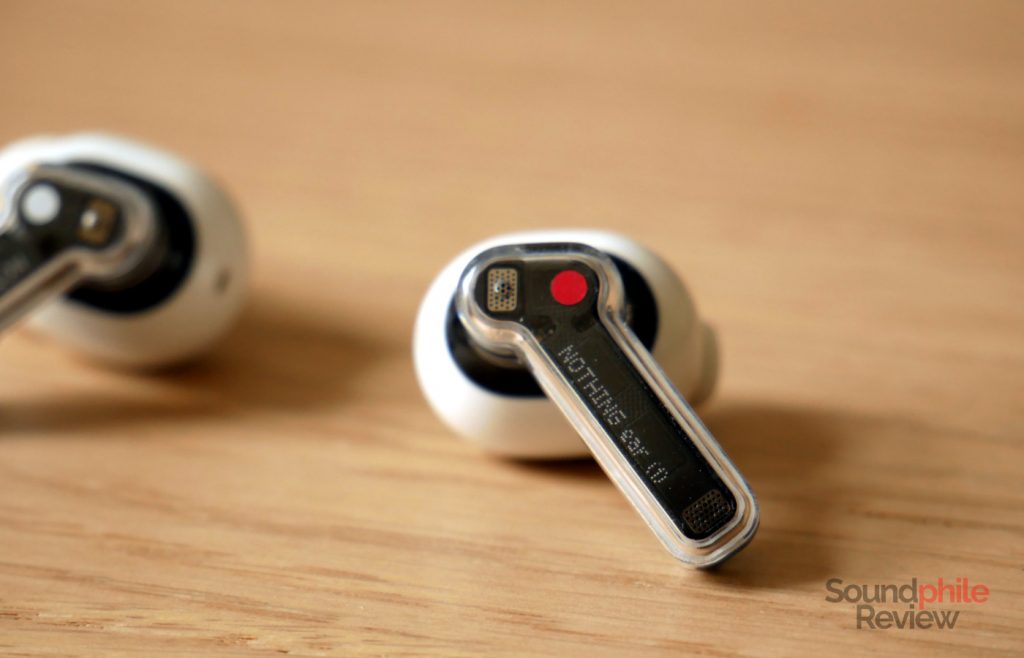 Design is what distinguishes the Nothing ear (1) from the crowd the most. These earphones have a unique blend of modern and retro features which makes them stand out: the use of just two colours, black and white, in conjunction with transparent plastic makes them appear like they come from the ’80s or the ’90s. That’s not a bad thing at all, as this makes them quite different from the rest of the minimalistic designs out there. I’ve spoken with people from Nothing who told me that using transparent plastic means having to deal with a lot of issues you normally don’t face, such as selecting components and materials so that they look good – when they’re inside opaque shells you don’t have to deal with that kind of thing. 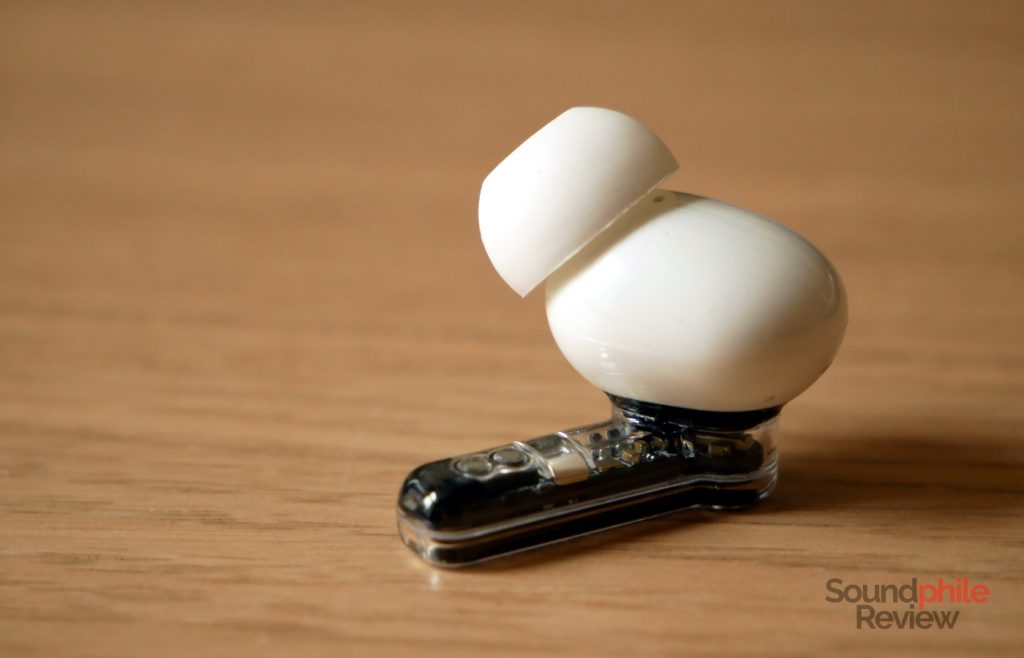 In terms of general shape, the ear (1) resemble the Apple AirPods Pro, with a pill-shaped main shell and an oblique stem coming out of it. The main shell is white and black, while the stem is transparent and shows the electronics inside – quite a cool effect. The nozzle has an oval shape, which is a bit of a nuisance since it won’t fit into many eartips.

Build quality is very high as assembly is basically flawless. I can’t point to a single issue with it. Well done, Nothing! 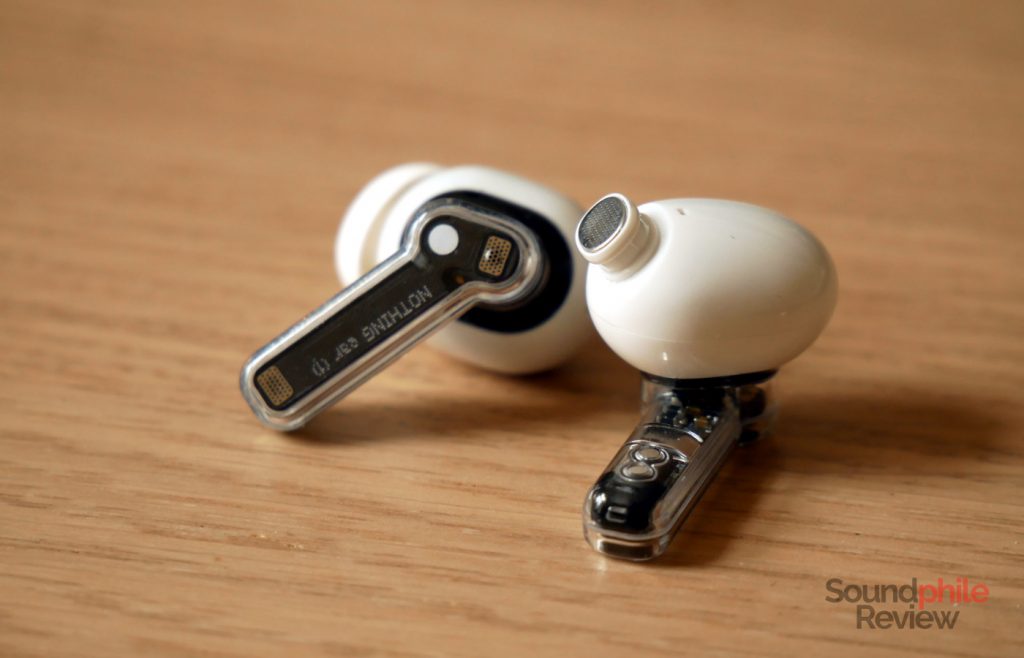 Passive isolation is very limited and the earphones fail to block most of the noise, leading you to hearing a lot of the noises from around you. That’s an issue, as we’ll see later. 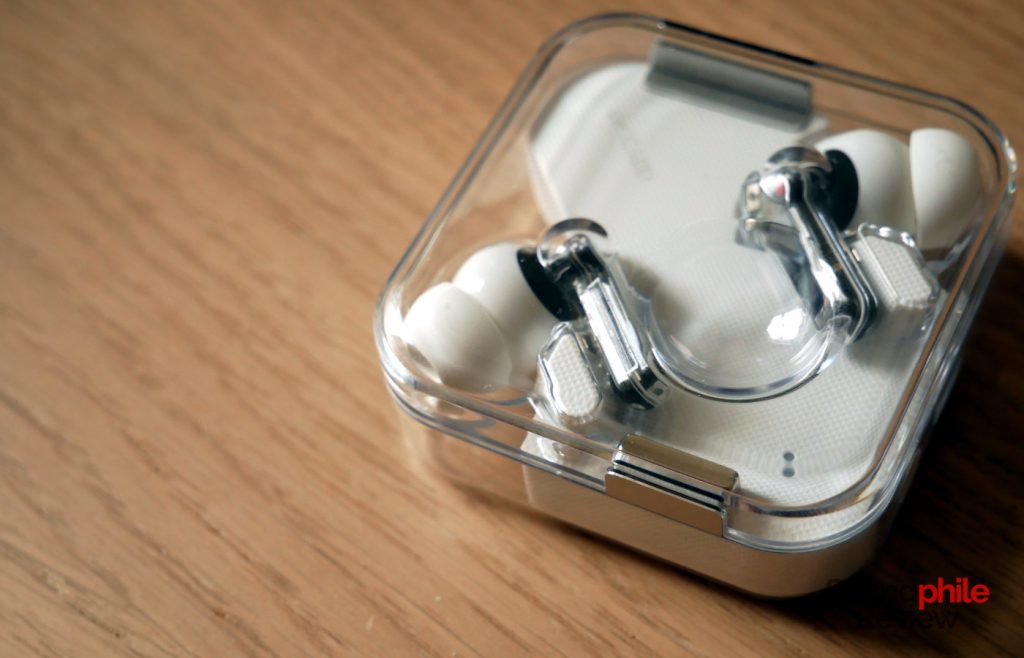 The case is probably the best element to showcase Nothing’s attention to design. It is really reminiscent of stuff from when I was a child in the ’90s and it kinda evokes the same magic – in some ways it seems to bring back the same excitement I had then for stuff that looked new and shiny. It is a bit weird in terms of shape, being a square with rounded corners, and its greatest weirdness is the notch in the lid, which is meant to make the case more like a fidget you can spin as well as easier to hold. The lid has a spring in it so that it automatically opens or closes, depending on what you’re doing with it. It also has magnets that, together with the shape of the case itself, make it very easy to place the earphones back in the case (while the shape alone is responsible for making them easy to pick up). Overall it’s a great case, although the transparent plastic is probably going to be full of scratches in no time at all. Just like all those shiny new things I had when I was a child. 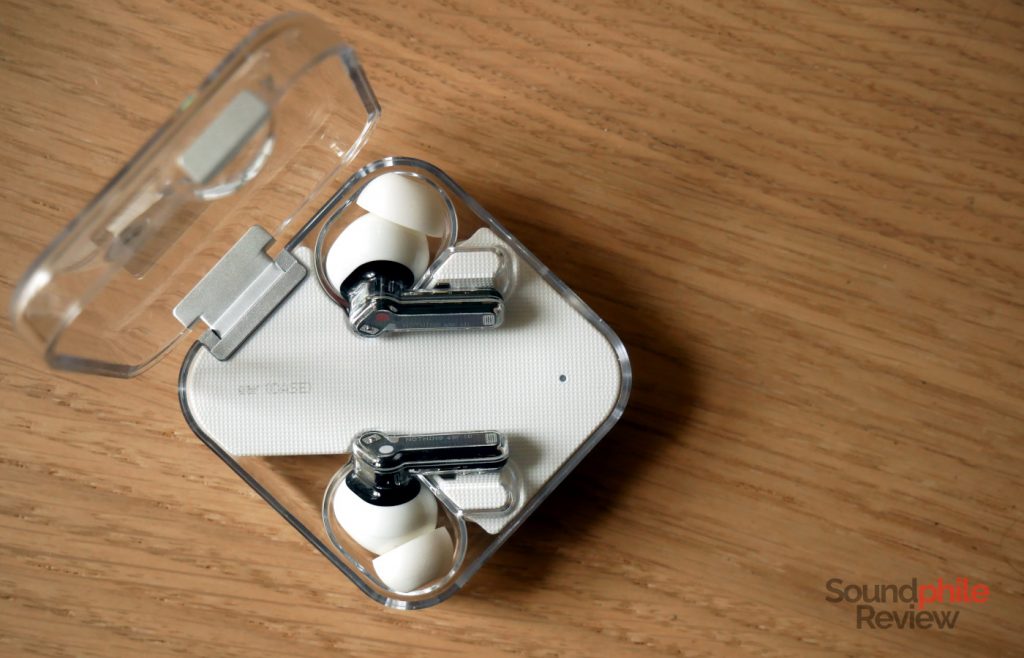 The Nothing ear (1) take advantage of the Bluetooth 5.2 standard and of the SBC and AAC codecs – so no high-quality codecs such as aptX or LDAC are found here. The connection is remarkably stable and shows stuttering and interruptions only at the edge of the range radius, which is a little larger than average for this price range.

I quite love the way Nothing has set up the controls as it’s one of the most intuitive implementations I’ve seen so far. With two taps on either earpiece you play or pause the music, with three taps on the left earpiece you go the previous track, with three taps on the right you skip to the next track and if you press and hold you activate ANC. The most interesting thing is that swiping up you raise the volume and swiping down you reduce it. That’s quite convenient! 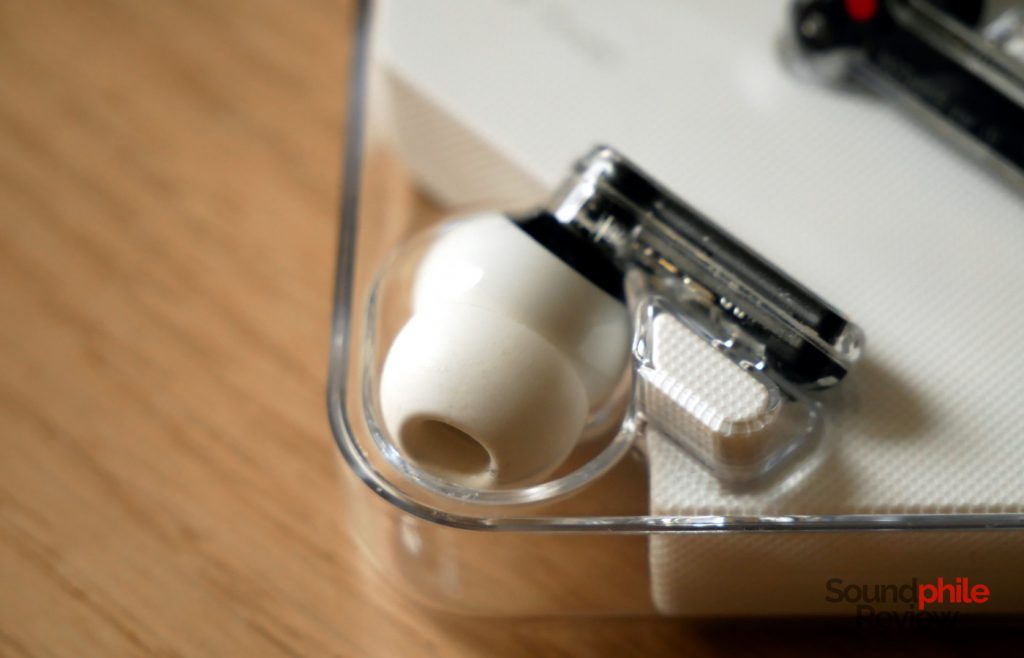 ANC is quite decent, as it removes most of the low-frequency sounds with high effectiveness. You can barely hear them with ANC enabled! It still struggles with mid and high frequencies, though, due to the low passive isolation – as that’s the thing that is usually more effective with those frequencies. Nothing uses a hybrid ANC technology with the ear (1): it uses one microphone on the outside to capture noises as well as one inside of the earphones to capture those noises that aren’t filtered out, in a combination of feed forward and feedback.

One thing I also really like is that ambient mode is automatically enabled when taking one earpiece out of the ear: it’s a very simple thing, but one that is quite effective at making things easier.

The same hybrid approach of ANC is used with the microphone and it is indeed quite good at removing noises. The microphones, though, are not quite as good when it comes to capturing my voice and people I’ve spoken with always complained that I sounded distant and my voice was not always clear. 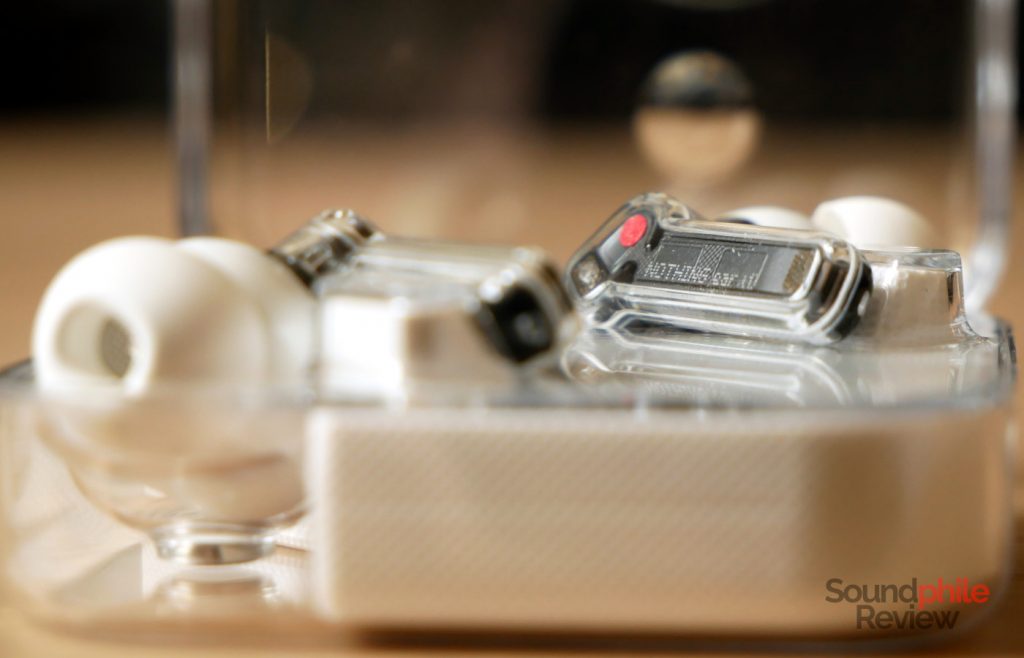 Nothing promises 4 hours of battery life with ANC on and 5.7 hour (quite a specific number!) with ANC off. I can attest that these figures are spot on, if not even a bit conservative. The case adds 5 additional charges, for a total of 24 hours with ANC and 34 hours without. The earphones have a quick charge feature that allows them to provide you with around 1 hour of battery life with just 10 minutes of charging; 10 minutes of charging the case, on the other hand, should give you almost two full charges of the earphones, or up to 8 hours (without ANC). The case is Qi-certified, so it is compatible with most wireless chargers on the market.

The ear (1) come with an app, both for Android and iOS. It allows you to do all the basic things, plus reassigning controls to other functions and allowing you to find a misplaced earphone. You just press a button and a loud sound is played on the earphone, so you can easily locate it. It also won’t play if you already have the earphones in your ear, so you won’t blow out your eardrums. Nice!

The app has an equaliser, but it doesn’t get further than “boost bass”, “boost highs” and “boost voice”, you don’t have actual access to the bands.

I’ve tested the Nothing ear (1) with both my Honor 9 smartphone and my HP EliteBook 745 G5 laptop, both loaded with FLAC files.

Just like most consumer-orientated products, the Nothng ear (1) offer a V-shaped sound signature with powerful bass accompanied by emphasised treble, in what is known as “boom and sizzle”. To obtain this, the earphones use an 11.6 mm diaphragm.

The ear (1) have noticeable background noise in the form of an intermittent hum – it sounds as if something was hitting the blades of a computer fan (sorry, this is the best analogy I can come up with). It is constant and it’s present whether you are playing music or not.

Soundstage has moderate width and little depth; the sensation I get from it is that sound is produced inside my ears, but then extends beyond them. Imaging is acceptable, with a basic positioning of instruments on the stage. Instrument separation is insufficient: as soon as you play moderately crowded tracks you can hear that there are issues showing up. Behemoth’s Wolves ov Siberia makes this quite clear, with details being smeared and the situation quickly becoming muddy and details being lost in the mix.

As one can expect from wireless earphones, lows are mostly concentrated in the mid-bass region with a decline as the frequency goes down. Surprisingly though, that decline is not as fast a I’d expect it to be and that means there’s still a decent sub-bass presence, with good enough volume down to around 30 Hz. Overall it’s decently tuned, although it can sometimes become a bit aggressive. The thing about bass is that it’s not fast… at all. It is a bit physical, but it lacks the speed that’s necessary to make drums and other similar instruments pop out; it sounds bloated and muddy, especially as multiple instruments play together. Detail is decent when few instruments play, but with more complex tracks it becomes a mess.

Midrange is V-shaped, with an accentuated lower part, a recessed middle region and a (very) emphasised upper region. This makes it quite weird, as it’s overall got a decent balance, but it makes some instruments like trumpets sound really aggressive. Some things like voices can sound distant, but looking at the whole picture there’s nothing that sounds outright wrong. Detail is decent as long as there’s not much going on, otherwise the sound just becomes a sludge of sounds. Speed, again, is an issue.

Treble is quite emphasised, especially in the lower region where there’s a peak that gets quite fatiguing when listening to tracks with lots of cymbals and other similarly high-pitched sounds. As an example, FM-84’s Chasing Yesterday is quite fatiguing on the ear (1) due to this emphasis. Apart from this, highs are characterised by an acceptable level of detail and by decent extension, although there’s a lot of ups-and-downs. I would say that detail is sufficient, though it never gets past that point of sufficiency.

Here are a few useful comparisons:

I absolutely love the design and functionality of the Nothing ear (1). I’ve got nothing to say about those. There’s (almost) nothing they could have done to make those better. And there’s noth… okay, okay, back to seriousness. The ear (1) really are great in those two areas, but they fall flat when it comes to sound quality. Although the company flaunts their collaboration with Teenage Engineering and that “the audiophiles [there] painstakingly diallid in the software and hardware for extraordinary bass, mid, and treble performance”, the result is a bit meh and it’s much less impressive than that of products such as the PurePlay Z3 2.0 or the Shanling MTW300. With the treble being so emphasised, I found myself more than once with a bit of a headache.

The Nothing ear (1) are “true wireless” earphones made for those who place design and functionality ahead of sound. They do really well for those people, but they end up being less interesting to audiophiles because of that and that’s why I can’t really recommend them. Also because $99 is not nothing and competition is really fierce at that price point. Nothing will have to come up with something better.