KB EAR seems intent on competing for the “best value” award as they’ve been launching great earphones at affordable prices. The KB EAR Lark are among the latest earphones they’ve launched and although they target the lowest area of the market, they actually offer quite a good mix of features. With an almost-neutral signature and more than decent technical ability, the Lark are serious contenders to the throne in their price bracket.

Disclaimer: I received a free unit from KB EAR themselves (thank you, Wendy!). The KB EAR Lark are available for ~$30. 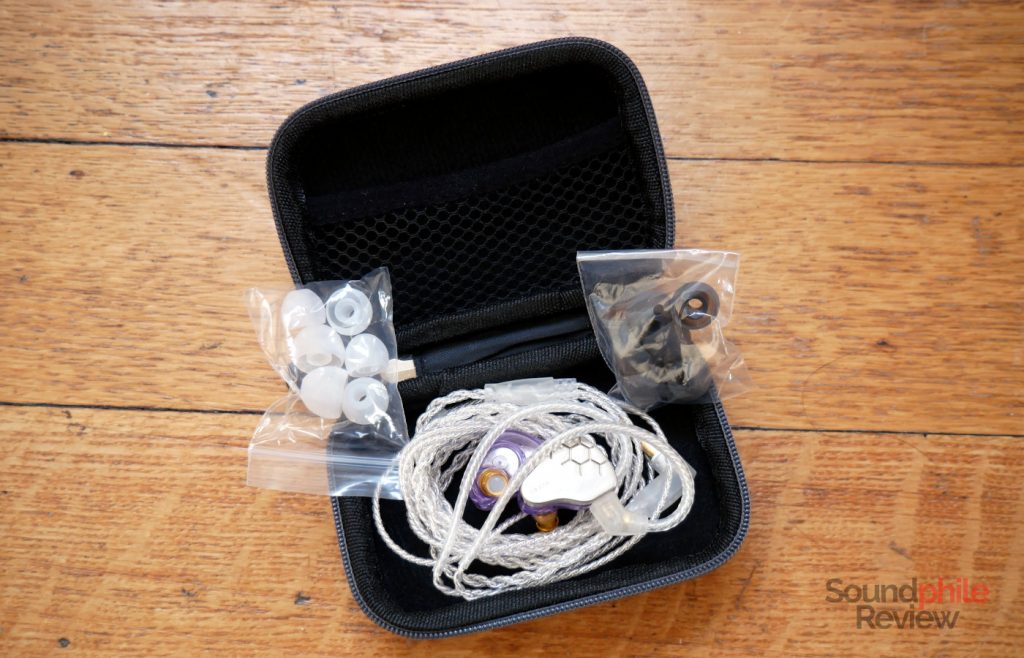 The KB EAR Lark come in a nice cardboard box. So yeah, not a common cardboard box, a nice one. One that actually feels kinda premium, not $30. I like it. Inside it are the earphones, the cable, two sets of silicone eartips (one gray/black, which is harder, and one white, which is softer. Take that, white silicone supremacists!). There’s also a case, which is completely unexpected at this price point. KB EAR went out of their way to give you a great set of accessories and they actually managed to accomplish just that. Kudos to them! 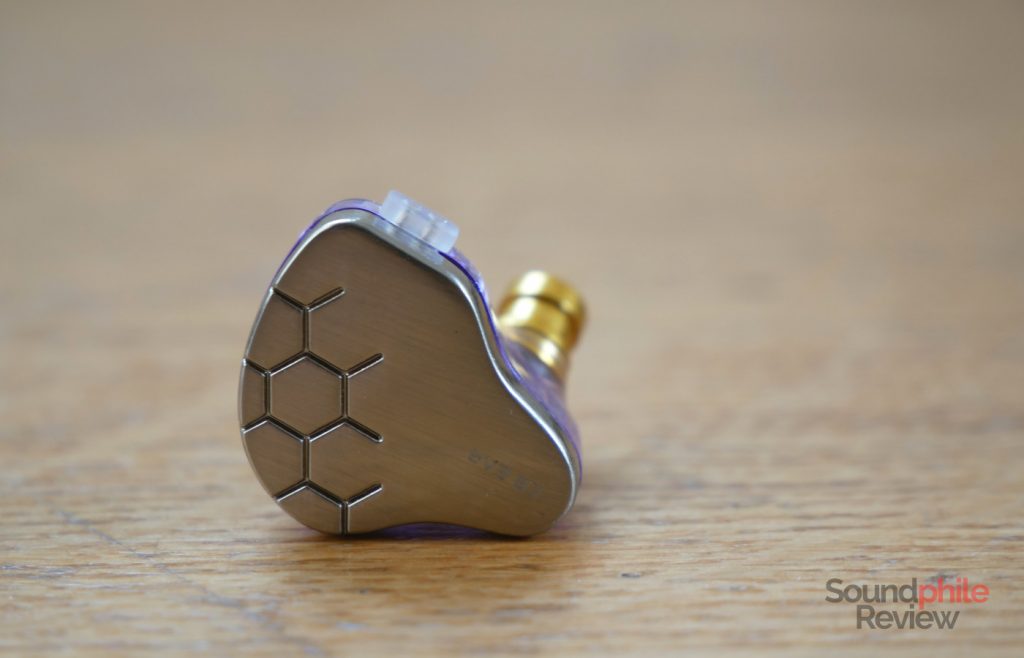 KB EAR decided to stay on the safe side of things and appears to have reused the KB EAR KS2 shells (although they couldn’t confirm this to me), which are comfortable and highly likeable: they have curved shapes that make them quite comfortable to wear and they’re made of transparent plastic that exposes what’s inside and gives them a definitely sexier look. The faceplate and the nozzle are made of metal, with the faceplate being silver and the nozzle being gold/brass in colour; the faceplate has a hex motif covering the upper left “corner” that looks quite cool. 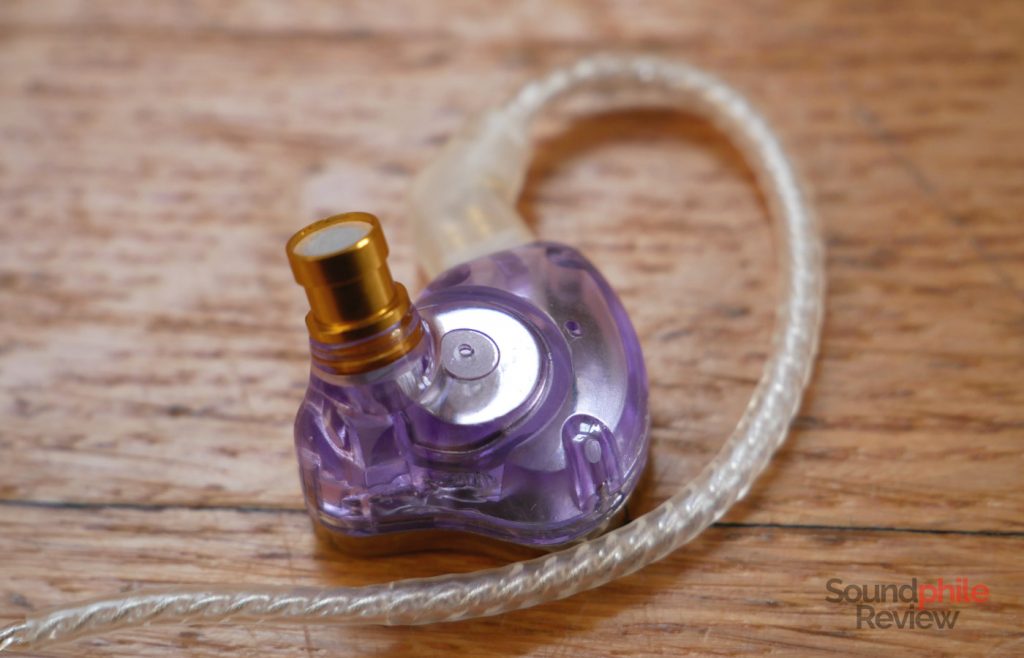 Considering the sub-$30 price, the KB EAR Lark fare quite well in the build quality department – they are in line with KZ’s offerings, in fact, but these seem to be built by KZ so there’s no real surprise there. I would actually deem them decent even if they were double the price, so they get a strong approval from me in this regard. 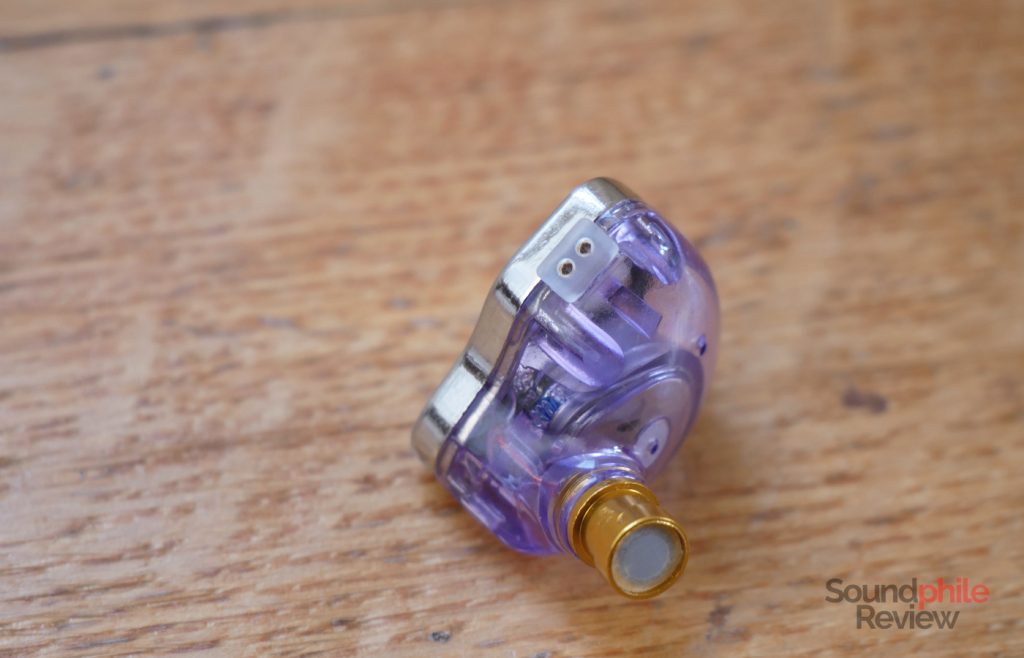 Comfort is another thing where the KB EAR Lark fare quite well, with the shell being curvy they fit in like your hand in the right glove.

The cable has a 2-pin connector, which is good, but the male part is on the earphones, which is bad, as that’s the part most prone to breaking. The cable itself is identical to those used by KZ on most of their products: four cores, braided between the jack and the Y-split and then just twisted. It seems to be SPC (silver-plated copper) by the looks. Like most KZ cables, it is quite prone to tangling and feels a bit flimsy. There’s also a chin slider, which is not that common nowadays (it feels like it was more popular a few years ago).

I tested the KB EAR Lark using an iFi Neo iDSD and an xDuoo LinK 2. Both were connected to my FLAC-loaded PC.

The KB EAR Lark use a single dynamic driver and a single balanced armature, both “custom tuned”. The dynamic driver has a 10 mm diameter, which is fairly large and should theoretically give it good physicality and good bass depth – though only the latter is actually true. The frequency response graph that you can see on promotional material is surprisingly quite accurate in terms of how the signature generally looks.

It must be noted that there are two versions of the KB EAR Lark: one, the so-called “4k variant“, is the one that I reviewed here which has a peak around 4 kHz. The new one got retuned and doesn’t have that peak; it’s the one you get when you make an order, unless you specifically want the 4k version – but, judging by what Wendy at KB EAR told me, the new version is the one to prefer as the 4 kHz peak was decreased by 3 dB, largely eliminating its issues.

Soundstage is enjoyably wide: although music still sounds very much like it’s coming from earphones placed in your ear, it has enough width and depth to give you the illusion that there’s a lot of space in there. Imaging is decent, although instrument placement is not super-accurate. Instrument separation is above average for the price range and allows you to tell apart several instruments in relatively complex tracks, although there’s some inevitable mash-up in the background.

I would describe bass as neutral(ish): it offers a solid foundation on which midrange builds, going decently deep and with a relatively linear curve. It’s really well-made and it offers a good middle ground: it has enough punch to make you feel its presence, but on the other hand it’s not overdone and doesn’t take the focus away from the midrange. I would say that the mid-bass is prevalent, but by a low margin. I wouldn’t describe it as bursting with detail, but it has enough resolution for nuances to come out. It is not really fast, with transients that lack incisiveness and a relatively long decay, but it’s acceptable in this price range. It’s also not quite physical, despite having a relatively large diaphragm.

Midrange appears to follow the footsteps of Tin HiFi: it tends towards neutrality with an added presence in the upper area, so that it appears lively and a bit biting. In fact it sounds quite clear thanks to this added presence and instruments such as electric guitars have additional kick that really puts the spotlight on them – in a good way. It still is quite bright, though, and it tends to be sibilant and sometimes a bit harsh. Although midrange is produced by the balanced armature, the transition between bass and midrange is quite clean and devoid of significant spikes or dips. The good thing is there is also quite a bit of detail, so midrange appears quite rich. It lacks physicality, but that’s expected considering it’s produced by a balanced armature.

Treble is where the only real issue of the Lark is: there is a spike around 8 kHz that, despite not being that large, is quite fatiguing. It surely gives the sound some real sparkle, but on the other hand it also causes high-pitched sounds to be quite aggressive. As a practical example, take Astropilot’s Hidden Planet: there are quite a lot of high-pitched sounds towards the end, and they are quite fatiguing. Mind you, this is not comparable to the RHA CL1 Ceramic, which were downright piercing: it’s more of a slight annoyance. On the other hand, though, other aspects of treble are good: it’s quite detailed and it exposes a few micro-details as well, so if you factor in the price it’s quite awesome. It’s also got a good extension that gets in the upper region, so it’s got abundant air and room to breathe. Were it not for the 8 kHz spike, this would be quite enjoyable.

The market doesn’t offer many great alternatives below $30, as the entry-level area has historically been poor of choice. Let’s look at the two most famous competitors in the wider sub-$50 bracket:

At less than $30, the KB EAR Lark are quite something. They do almost everything right and they offer more than one would assume at such a low price point – so much so, in fact, that I think they are among the best earphones in their price range despite their flaws. Because while they have their fair share of issues, especially in the treble area, their pros far outweigh their cons: the almost-neutral signature, the great level of detail, the very good comfort and the good build quality make them an easy recommendation. Considering the new version tames the treble, their main issue is fixed and this makes them more appealing. They’re great as an introduction to better quality audio, and they’re just as good as an affordable addition to one’s collection.