There are earphones that are simple, but whose design is striking nonetheless. That’s the case when it comes to the KB EAR F1, which are single balanced armature IEMs with an odd design and a good tuning that make them an ideal companion for commutes and other occasions of casual listening.

Disclaimer: I got a free unit directly from KB EAR. They sell the F1 on their website at $35.

The KB EAR F1 come with simple packaging and little accessories. The F1 come in a cardboard box that holds the earphones and three pairs of silicone tips – that’s it. 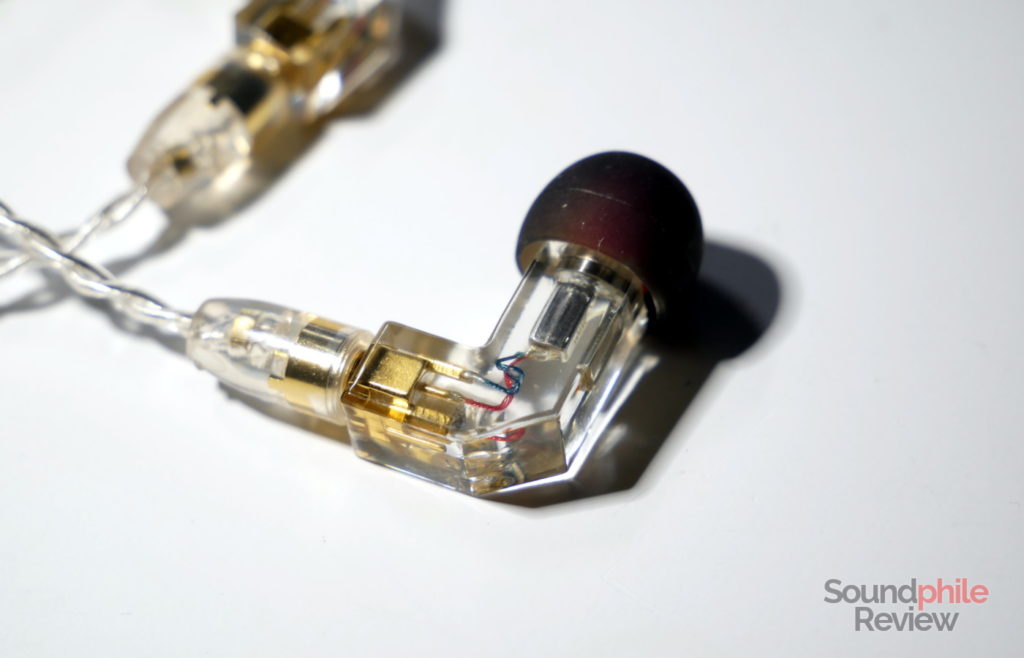 The KB EAR F1 surely are transparent. Seriously! They are made of transparent resin, so they completely expose the internals and one can see everything from the MMCX socket to the balanced armature, wiring included. The F1 are L-shaped, with the shorter part having the MMCX connector. They’re squared, so they really resemble the letter, except for having the external right angle cut off. In a sense they remind me of Etymotic earphones, with the important difference of having no curved surface (while Etymotic IEMs are curved). The nozzle is not made of resin as the rest of the shell, it is made of metal instead. It also does not have a lip, though that never caused me any problem as the tips stay in place. 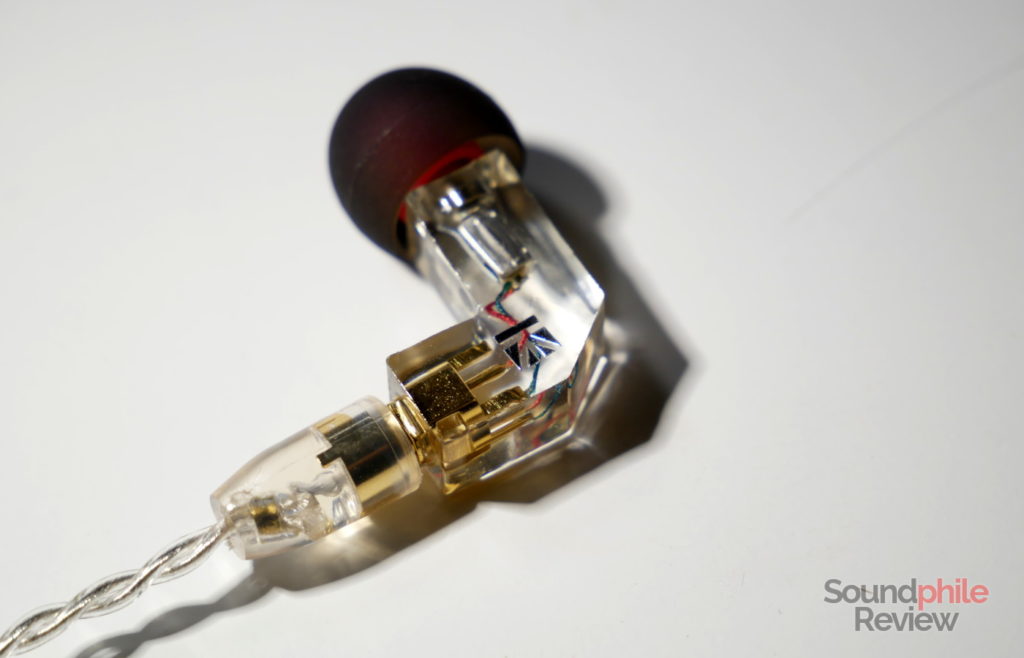 The use of solid resin makes the KB EAR F1 resistant and presumably durable. When looking at the pictures I thought they looked a bit frail, but having them on hand changed that impression completely as they appear to be well-made. The minor details are not exceptional, as the balanced armatures are not perfectly aligned with the body and the wires are a bit messy, but everything else looks good. 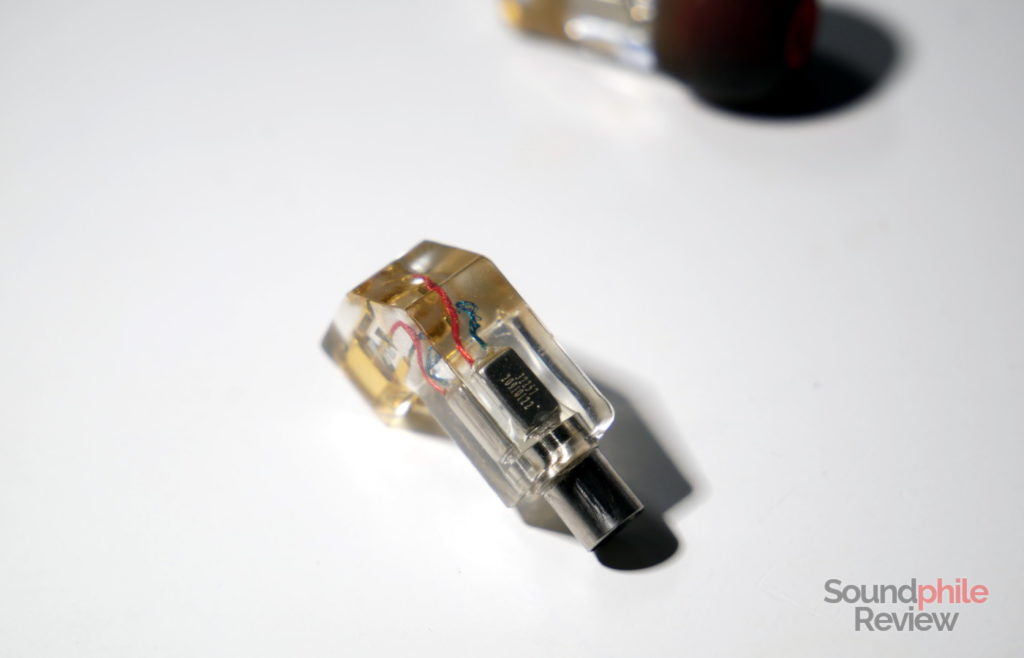 While they’re certainly not top-notch in isolation, the KB EAR F1 are still plenty good in that regard. Using foam tips I could block out most unwanted noise and end up with a relatively silent background. That’s unexpected, given that the only thing that blocks sound is basically the eartips, but I’m not going to complain about that.

In terms of comfort, they are probably among the best in-ear headphones on the market as they can enter almost every ear canal: one just needs to get the right eartips size. 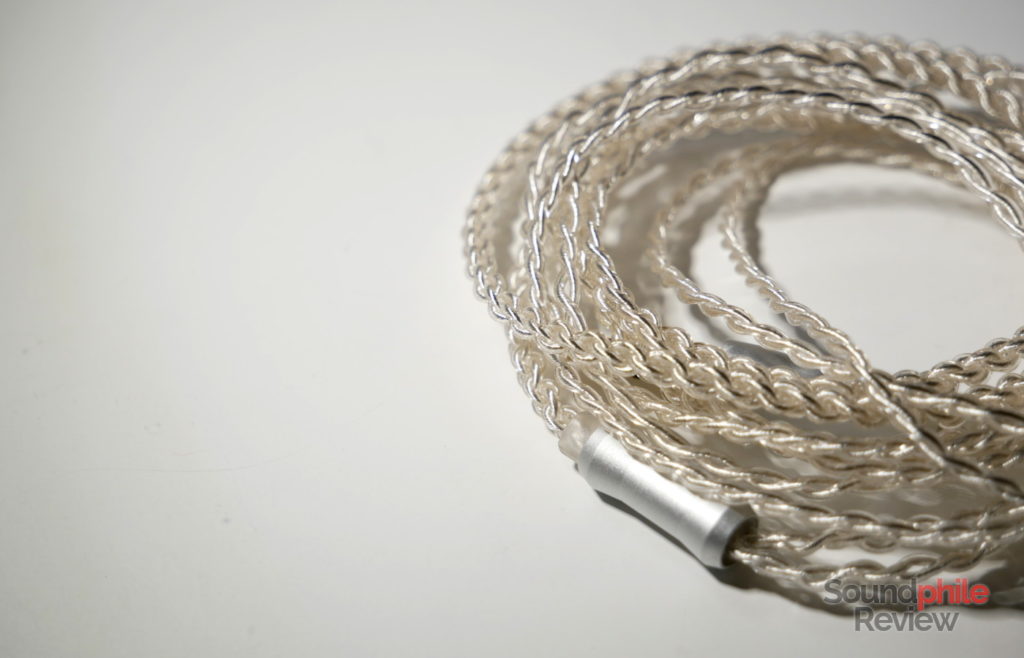 The cable looks quite good and feels decent in terms of quality. It is made of four cores, two for each channel, and it has a silver colour which seems to indicate that it is actually silver-plated. The jack housing and the Y-split are both made of aluminium, while the MMCX housings are made of the same transparent resin used for the earpieces.

I tested the KB EAR F1 using an SMSL DP3 connected to my computer and playing music stored on a hard drive while at desk and an xDuoo X10T II with an xDuoo XD-10 Poke while on the go. In both cases I also used an iFi IEMatch. In both cases files were the same, mostly FLACs in standard resolution (16 bit, 44.1 kHz).

The KB EAR F1 have low impedance and high sensitivity like many other balanced armature-based earphones and that means they can be used with any source without the need for an amplifier. The unit I received uses a single balanced armature made by Bellsing, with code 32257. There seem to be four different variants on the market, but the Bellsing one should be the “correct” one as confirmed by the company.

Soundstage on the F1 is not really wide as it is bidimensional and limited in width; it is almost as if it happened inside a picture frame, with very precise borders and no depth. Imaging is limited to little more than the three basic positions – left, centre, right. Instrument separation is decent, but hardly more than that: moderately complex tracks make instruments lose part of their detail and don’t allow one to really pick each individual instrument.

Despite only using one balanced armature, the KB EAR F1 have a surprising low-end presence. Now they are far from being bass cannons, but they do have both bass extension and presence which are quite remarkable qualities for IEMs of this kind. They only reach 50 Hz with enough strength, but that’s more than I thought they would be able to do. If anything, bass is a bit more accentuated than ideal. In terms of physical presence bass is stereotypical balanced armature-made, with low to no impact but good speed. It is detailed enough, though.

Midrange is bright, with a small spike in the upper range at the border with treble. It is however not really coloured in an immediately perceivable way. It’s more of a matter of nuance. This makes the F1 good at reproducing almost anything. Detail is decent and so is speed.

Treble is not really extended nor really sparkling nor vivid. Yet it has enough extension and presence in the mix to be clearly audible and to present the listener with enough detail. There is a small peak somewhere, in the middle region as far as I can tell, that can become a bit fatiguing after a while, but that’s the only issue I can point out.

The KB EAR F1 are affordable in-ear headphones with an odd design but a surprisingly good sound profile. They sound better than one would legitimately expect a single balanced armature IEM would. They’re not technical earphones, nor are they perfect in terms of tuning, but they are enjoyable. More so than many KZ-branded earphones, in fact. Combining that with the great comfort, replaceable cable and nice design, they are good enough to be recommended for casual listening, though they can’t compete with in-ear headphones priced just a little more at $50 (e.g. Tin Audio T2, RevoNext QT2…).