iFi’s wide range of products recently expanded to include a device aimed at those of us audiophiles with dirt electric power lines that result in hum, hiss, buzz and all other kinds of annoying noise that disturbs our listening pleasure. It is called the iFi AC iPurifier and it reminds me of a USB power source from the Palm webOS era (any other fan out there?).

After a bit more than a year writing news and reviews here, I feel comfortable saying I covered most product categories out there – the AC iPurifier somewhat deviates from the standard, though it’s an interesting device that can help you whether you are using speakers or headphones.

Disclaimer: iFi sent me a unit I had to return. More information on the iFi AC iPurifier is available on the company’s website.

The packaging is rather simple – the AC iPurifier comes in one of iFi’s signature rectangular cardboard boxes and the only addition to the device itself is the manual. You can see a few pictures in this Out of the Box article. 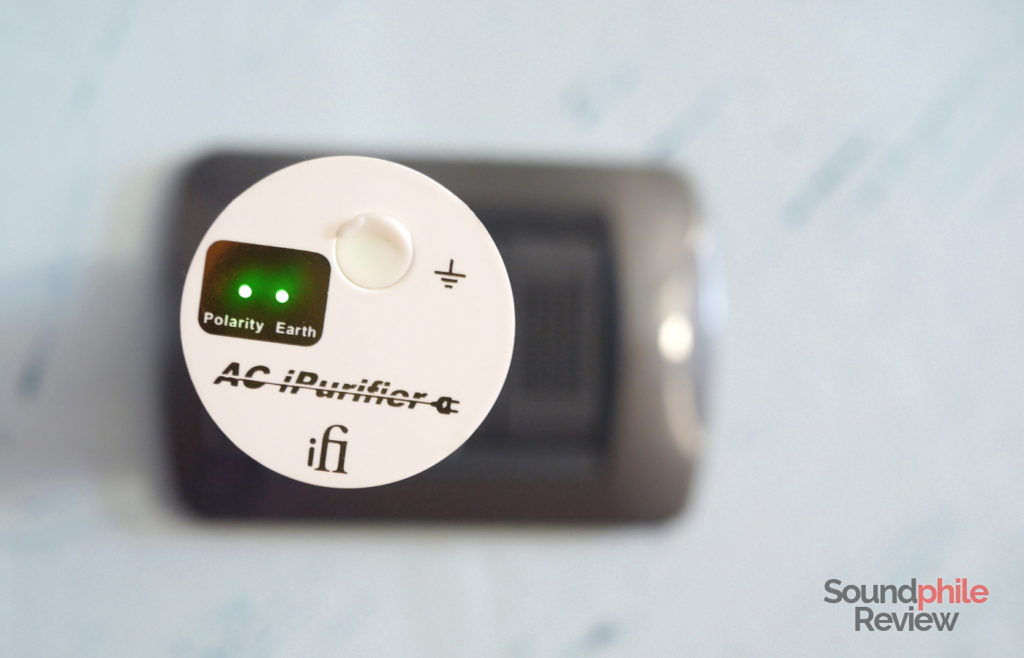 The iFi AC iPurifier is a white plastic cylinder with a power plug on one end and a couple LEDs and a ground connector on the other. It’s incredibly simple – there is no real commentary I can make. I’ll just state that it seems to be built like a tank: plastic seems durable and able to withstand the passing of time, while the plug is gold plated and this should make it virtually immortal. 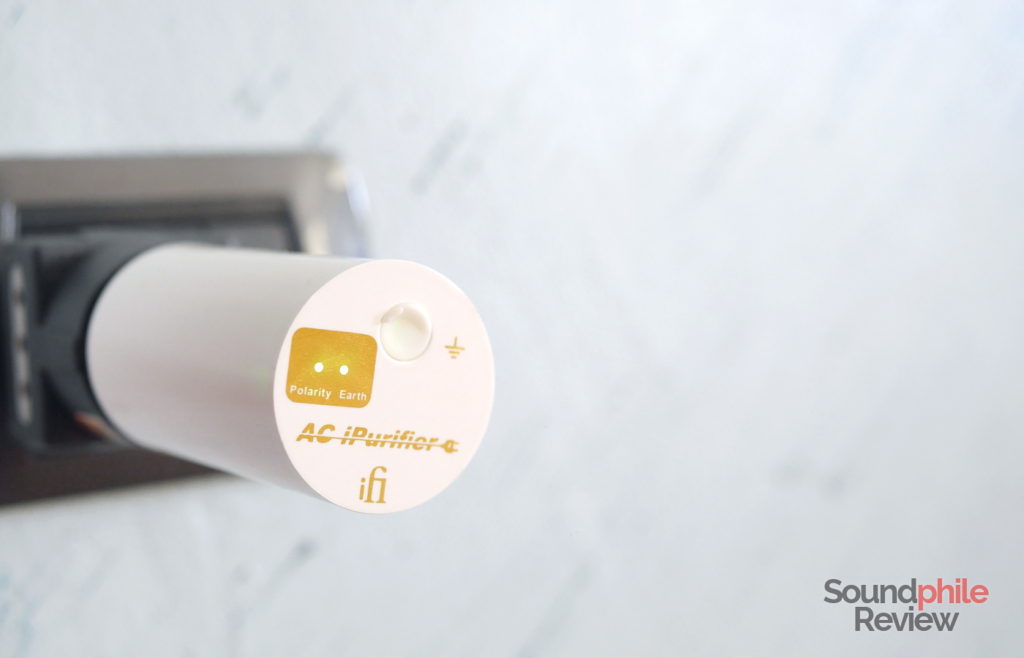 Using the iFi AC iPurifier is dead simple: you plug it in. No other action is necessary. It is especially useful and practical if you use a power strip, as you can plug it in in a free slot preceding that (or those) of your audio devices, be they digital or analogue. If you use a mix of digital and analogue devices, iFi recommends putting one AC iPurifier between them to get the best results. As I do not have more than one AC iPurifier I cannot test this use case (as my power strip is under my desk, I used a wall socket and an adapter, since we have our own standard for plugs here in Italy).

The LEDs on top warn you if there is something wrong with your system: one LED tells you if polarity is wrong (my understanding of AC was there was no “right” polarity on a wall socket), the other if the ground is fine or, conversely, if there is a ground loop or missing earth. The small connector on top comes in handy if you need to ground one device (e.g. a turntable) with no earth, as the AC iPurifier acts as a ground connector and provides the necessary ground.

The iFi AC iPurifier also acts as a surge protector: in case there’s a spike or surge, the device shuts off and protects other devices from being damaged. There’s no 100% guarantee that it will save your equipment from a lightning strike on your house, but that’s implicit. As Benjamin Franklin put it, “in this world nothing can be said to be certain, except death and taxes”.

When testing the AC iPurifier, I used a Topping DX7, a Little Dot MKIII SE and a Topping D30. They are all attached to a power strip where my PC also draws power from.

The Topping DX7 has always had lots of background noise in my home, despite other devices being dead silent and other reviews reporting it to be completely devoid of noise. Since I started using the AC iPurifier, though, I can hear the noise is reduced – my ears are grateful for this. The reduction is substantial, though there is still a bit of hiss in the background that is especially noticeable with low-impedance, highly sensitive headphones and earphones. The difference is remarkable, though.

The Little Dot has always been clear of noise and I could hear no changes when using the AC iPurifier. The Topping D30 seems to be clearer, as it had a tiny bit of noise in the background that was eliminated.

The AC iPurifier’s main task is to reduce noise and it is tremendously effective at it. In the case of the DX7 it wasn’t able to completely eliminate it, but I will try again with a new, better power strip in the future to see whether it changes anything (as I suspect the power strip has an influence on that, too, though that’s just a suspect without any further proof).

As I could not reliably hear differences in sound properties (i.e. changes in soundstage, detail, etc), I will not delve into details I didn’t hear – to my ears, the sound is just the same, just with less buzz and hiss. Which is quite a feat in itself, really, so I would say the AC iPurifier is worth its price for this fact alone – but I’ll let you decide on this.

In regards to noise reduction, the iFi AC iPurifier works as advertised – it removes a lot of noise and makes it more bearable. It is also incredibly easy to operate and fits any power plug (in my case it’s an EU plug, but there is the USA plug also available).

There are multiple factors that can lead to electrical noise in a system, but the AC iPurifier is in fact a quick and effective solution that is not even that expensive. With its ~$100 price tag, it is affordable and can be considered an investment to surely improve the quality of the sound. Contrary to other things (i.e. cables) that may be considered pure snake oil by some, this works.

The iFi AC iPurifier is available at $99.