What if the KZ ZS6 became smaller and ditched one dynamic driver and one balanced armature? The result would be pretty similar to the KZ ZSA, which recently launched to complete KZ’s line-up with a metal-clad entry level hybrid IEM. They decided to use a peculiar design, which goes with a peculiar sound signature to match.

The target for these headphones is fun, I guess – with heavy bass such as this you certainly feel those bass notes, but there’s not much fidelity left. To each their own, though, as this is a signature people deliberately choose and I find it hard to criticise ZSA’s bass outside of quantity.

Disclaimer: this is a sample AK Audio provided and I had to pay nothing for it. You can buy it for $15 (without microphone) or $16 (with microphone) if you use the code “SoundphileReview” during the checkout process. Write it in the message field of your order, select “Other payment methods”, confirm the order and then cancel the payment. The people at AK Audio will adjust the price manually and you will receive an email confirmation, after that you will be able to pay and complete your order. 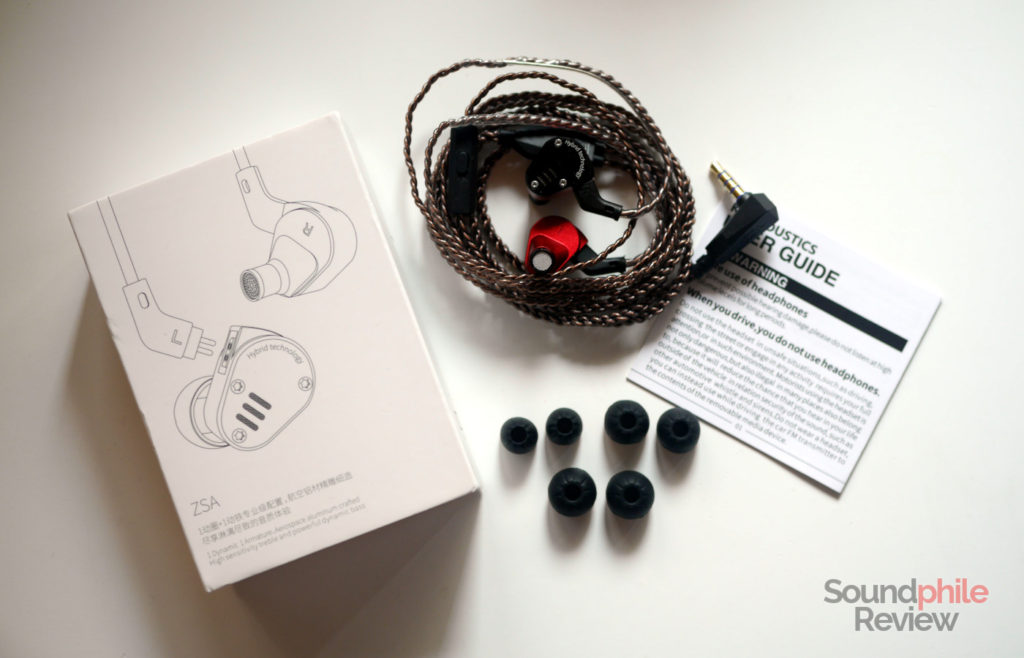 Nothing here as always with KZ headphones: the box contains the headphones, the cable (the new braided one also found in the ZS10 box) and eartips in three sizes. That’s it. 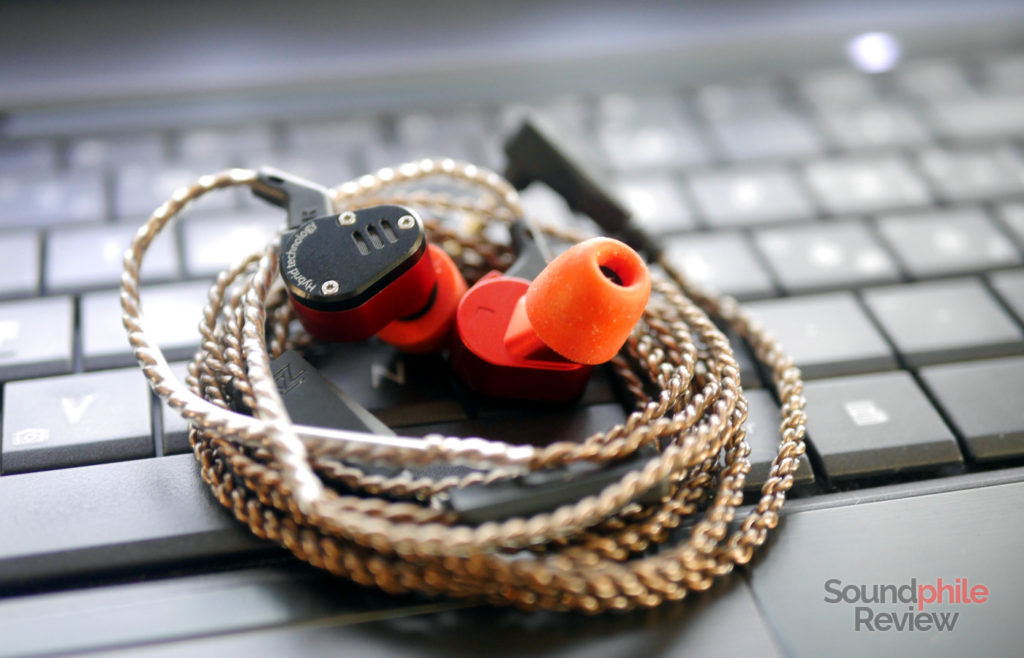 As I briefly mentioned in the introduction, there is no doubt KZ placed a bet on design being somewhat distinctive: the shells, made of aluminium, are two-toned in black and red, a fact that makes them noticeable and sets them apart from the rest of KZ’s line-up. While the shape is reminiscent of the ZS6’s, the colours are clearly new. The faceplates and nozzles are painted black, while the inner part of the housing is reserved the red treatment. The faceplates bear three vertical vents protected by a grille and sport three small bolts.

As for the shape, it is almost triangular with one side being round, almost like the RevoNext QT2. It is rather small and the nozzles are slightly angled to better fit in the ears. The earpieces are mode of three parts: the faceplate, the rest of the housing and the nozzle. This is probably due  to the balanced armature being positioned in the nozzle. 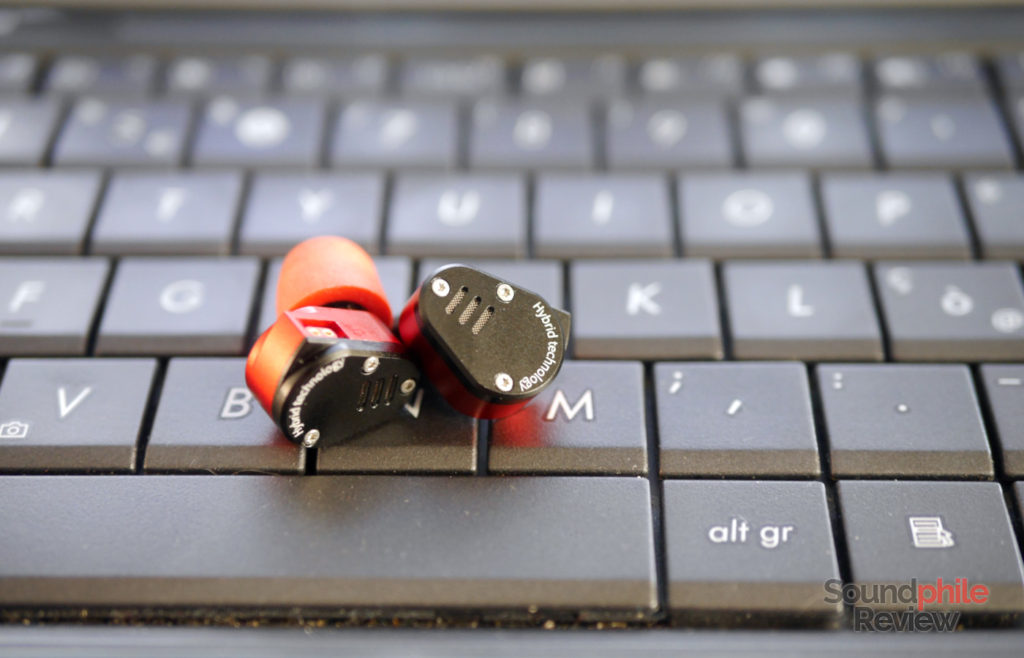 It seems like KZ knows how to build metal earphones as the quality is very good. In fact, earpieces are such good quality one could think they costed $100 or more. What betrays the cheap nature of the ZSA is the cable, which is just acceptable – though better (by a long shot) than the usual plasticky one in any possible way. Considering how low priced these are, I have no criticisms to make over build quality.

Though comfort is a strictly personal matter, I think the ZSA can be comfortable for a large number of people. The small size, rounded shapes and over-ear cable management should mean the fit to be almost universal, eliminating cases such as the ZS6’s rough edges or the ZS10’s large size. In my experience, I could wear the ZSA for as long as 4 hours before I would feel any fatigue. That’s obviously not an objective measurement of comfort, but it gives you an idea. 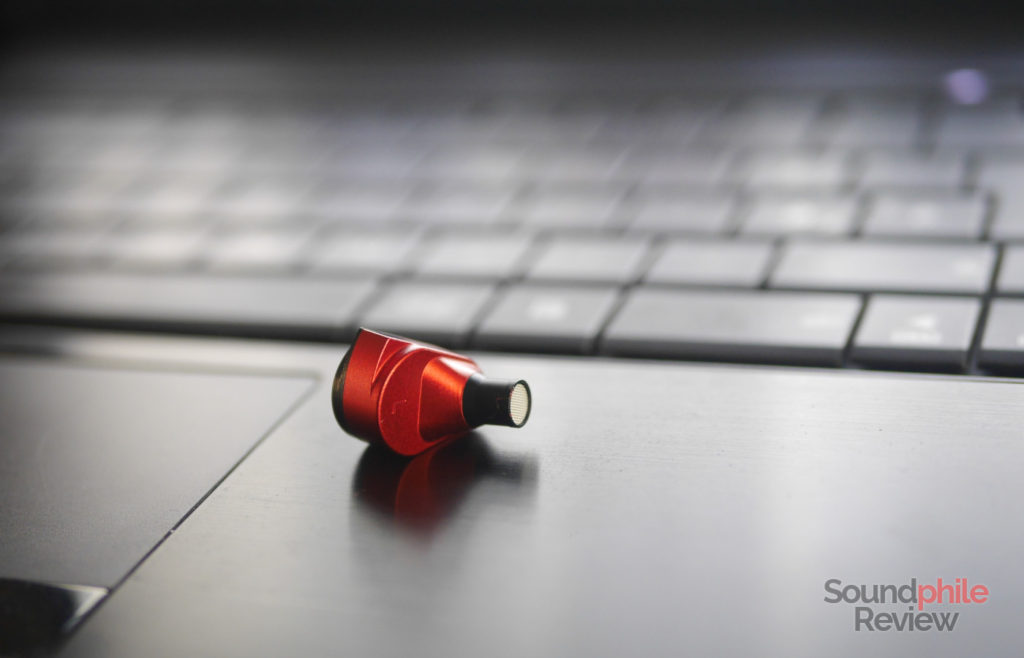 In the Headphones in Pictures article I wrote the KZ ZSA offer almost no isolation: I was wrong – it seems like my judgement was a bit hasty. Isolation is in fact unexpectedly good when using KZ’s own foam eartips. It is not complete, so it doesn’t shield you from all the noise coming from outside, but it does a great job at reducing the volume of any sound by a large measure, even in typically difficult situations such as public transport or busy streets. The difference is noticeable and just wearing them lowers the volume of noise by several decibels. I must admit this is completely unexpected as there are grilles on the back that made me think these were semi-open IEMs with consequent poor isolation.

After the usual 100 hours break-in period, I tested the KZ ZSA using the following equipment: Topping DX7, Topping D30 feeding a Venture Electronics RunAbout 2.0bl, Cayin N5ii. All source files were FLACs in standard resolution, with the occasional exception of high-bitrate MP3s or hi-res FLACs. I used the Yinyoo 6-core copper cable and the iFi IEMatch2.5 most of the time.

The ZSA uses a fairly common hybrid approach, with one dynamic driver and one balanced armature, that lends it a distinctively V-shaped sound signature – we may say it’s KZ’s house sound. Or KZ’s signature signature, whichever you prefer (I love the latter). On a more serious note, the ZSA offer punchy bass and emphasised treble like other previous models, but in a very different way.

A now famous Sony ad for their bass-oriented headphones states “hear nothing but the bass”. An audiophile dies inside every time they read this. Now, the KZ ZSA is not quite like those Sony headphones, but they surely place a huge bet on bass as it is very prominent. Bass-heavy genres are therefore those that take most advantage from this tuning.

Instrument separation is very decent, though it has clear limits that surface when listening complex tracks with lots of different layers of sound. On the other hand, soundstage is just average in its width and lacking in depth, with imaging also being acceptable and only enabling you to position instruments loosely across the stage.

Bass is the star of the show here, there’s no doubt about it. The KZ ZSA are headphones that pack a punch – and a what a punch! Considering how small the driver is and how cheap these are, it is almost incredible that they could achieve this level of bass. It is deep, reaching up to 25 Hz at very good volume levels. I usually don’t like hyperboles, but this is plain superb. The flip side of the coin is that bass is predominant and overpowering, often taking control of the scene and staying on the front. Quantity matters aside, it is unexpectedly good as it is fast enough to create a sense of impact, displaying some texture and enough control not to leak over mids excessively.

The lower and central regions of midrange, where male vocals are based, are recessed and sound therefore not as full and prominent as expected; on the other hand, the upper part is emphasised and female vocals, high-pitched instruments (i.e. violins, wind instruments, etc) benefit from this tuning. Maggese by Italian artist Cesare Cremonini is a good example in this sense, as his voice is slightly in the background and almost covered by other instruments, also sounding a bit weird. On the other hand, the introduction to She Painted Fire Across the Skyline by Agalloch is almost piercing. Technically speaking, midrange is not bad at all: it renders details well and in good quantity.

It seems that a peak at the intersection between upper midrange and lower treble is part of KZ’s sound. And, keeping consistency with the other models, the ZSA also lacks extension in the higher part of the treble range. This makes instruments such as cymbals lack extension and presence, and makes sibilance abound. Detail is generally speaking sufficient, but not much more.

One final note as for the sound: in the past few weeks I’ve been using the KZ ZSA and I’ve also fell victim to heavy migraines. I found out that the ZSA is related to them (if not the cause itself), as they stopped right when I stopped using them for a few days, and got back when I got back to using them again. The peculiar sound signature of the IEMs may be among the causes, so if you are especially sensitive you may need to watch out for unwanted side effects.

As I wrote a few lines ago, I find that any genre that relies on bass can benefit from this tuning but, on the other hand, it is this same tuning that can become invasive in other genres that require more prominence in the midrange and treble area. Acoustic genres are especially damaged by this heavy bass and should therefore be avoided.

Comparing the KZ ZSA to other headphones, this is the result:

As regular readers of Soundphile Review know, I praise neutral tunings and tend to judge anything else negatively, even though my personal preference goes to bright signatures. Despite this, considering that the KZ ZSA sell for about $25, I think that they deserve at least some praise because they offer quality bass at a price point where it often is not that good. They’re bass cannons that can please bassheads and not only them.

The KZ ZSA are good at bass and you should only buy them if that is exactly what you want, but if you want balanced headphones you can use to listen to a wide array of genres then these may not suit your needs. If only they had better midrange and treble, these would easily win my recommendation for bass-heavy headphones.