The VE Asura 2.0 are the midrange earbuds from Venture Electronics. When I got to listen the $5 Monk Plus, I wondered what VE could do with a higher-end earbud – if a product that cheap can sound so good, what could a $100 or even a $200 product sound like? I finally got a (partial) answer: the Asura 2.0, which is $78, is a detailed, airy earbud with a large soundstage and an accurate yet entertaining sound signature.

While barebone in their presentation and devoid of any accessory, it does not surprise me that the Asura 2.0 are able to deliver outstanding quality and value. If the resurgence of earbuds has to have any champion, the Asura 2.0 are a great example of what can be achieved with little expense.

Disclaimer: Lee kindly sent me a unit I did not pay for (thank you!). You can buy one for yourself on VE’s website. 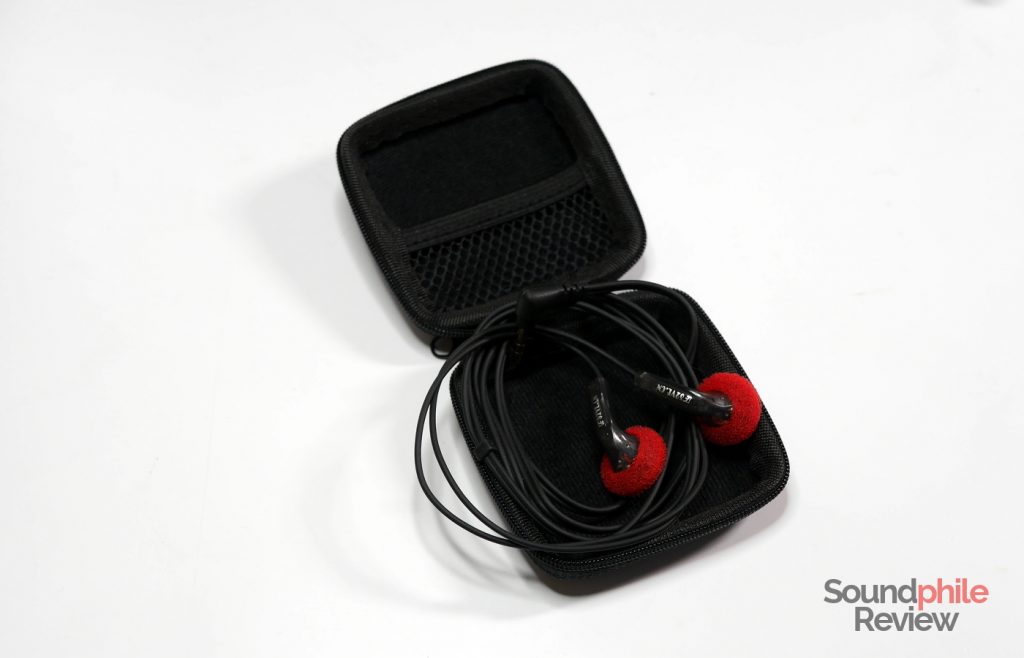 True to VE’s tradition, the Asura 2.0 I got came without any accessories but a small carrying case. It’s of the hard type and it’s covered in fabric (in my case a jeans cloth). The ones you buy actually include an Ex Pack (which includes different types of foams, rubber rings and rubber wings), two clips and a cardboard box to store it all. 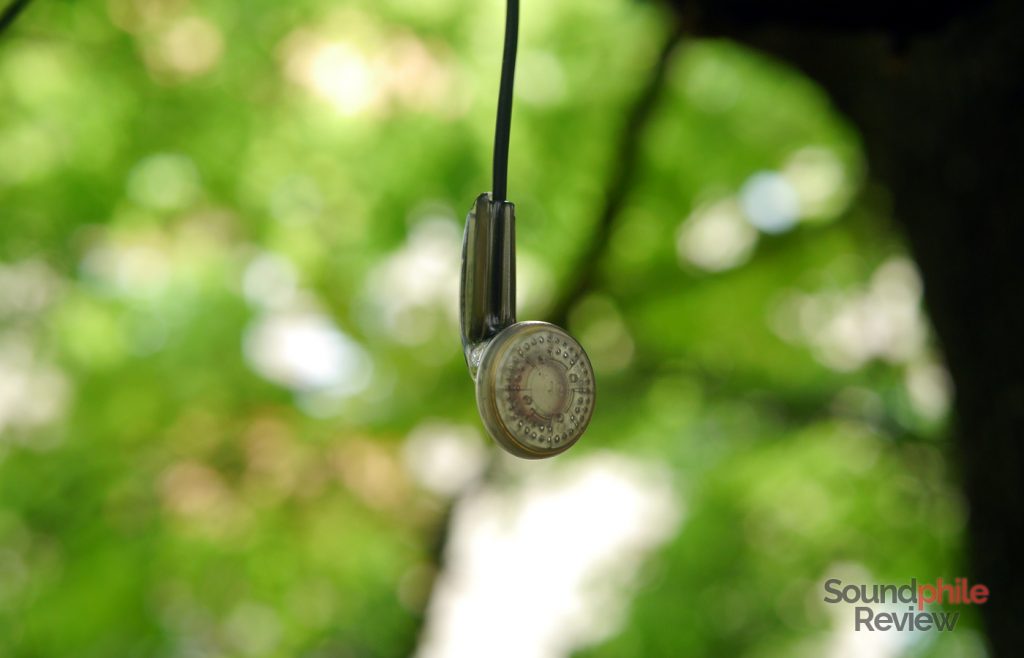 The VE Asura 2.0 come as a somewhat anonymous product in terms of design: they’re almost identical to the Monk Plus, save for a few details. They’re made of transparent black plastic which exposes the innards, and they sport the 52VE.CN logo as opposed to the MONK lettering found on the lower-end sibling.

The cable is covered in rubber and sports a right-angle 3.5 mm plug; there are options for a 3.5 mm or 2.5 mm balanced jack connector for people with balanced amplifiers or DAPs. It seems robust enough to survive daily use for a prolonged time; it lacks a chin slider, probably for the desktop vocation of the Asura 2.0. 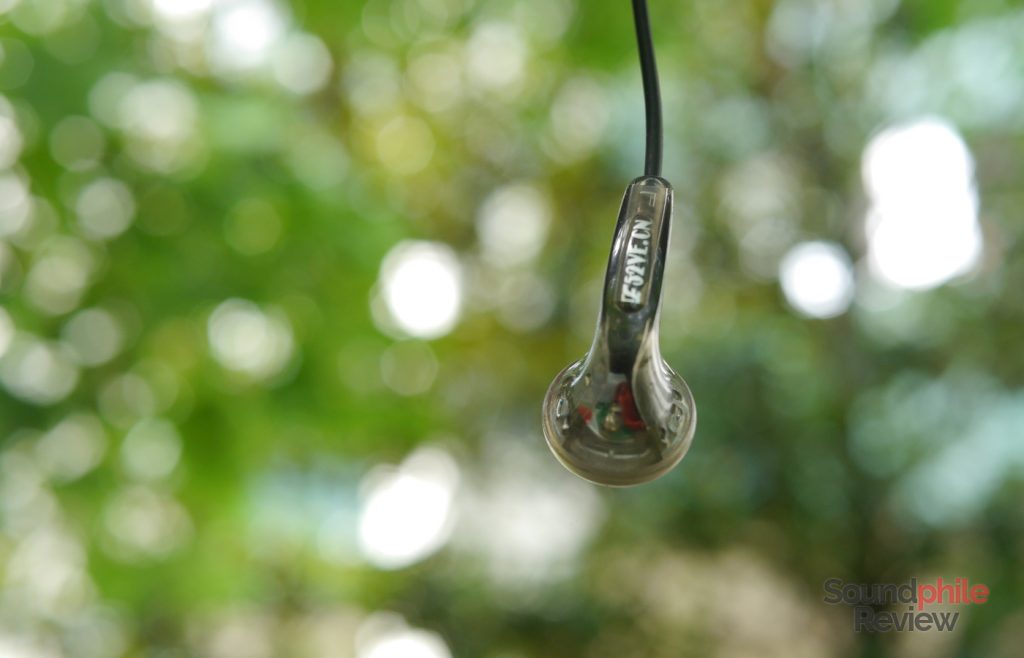 I found the Monk Plus to be quite uncomfortable without any foam and I expected the Asura 2.0 to be similar, but to my surprise they fare way better than their lesser siblings. Of course comfort is a very subjective matter, but they fit almost perfectly inside my ears and I can wear them for hours on end before I feel the urge to remove them. When I added the foams from the Monk Plus’ Extra Pack they became even more comfortable and I found myself wearing them for 8 hours a day without even noticing it. 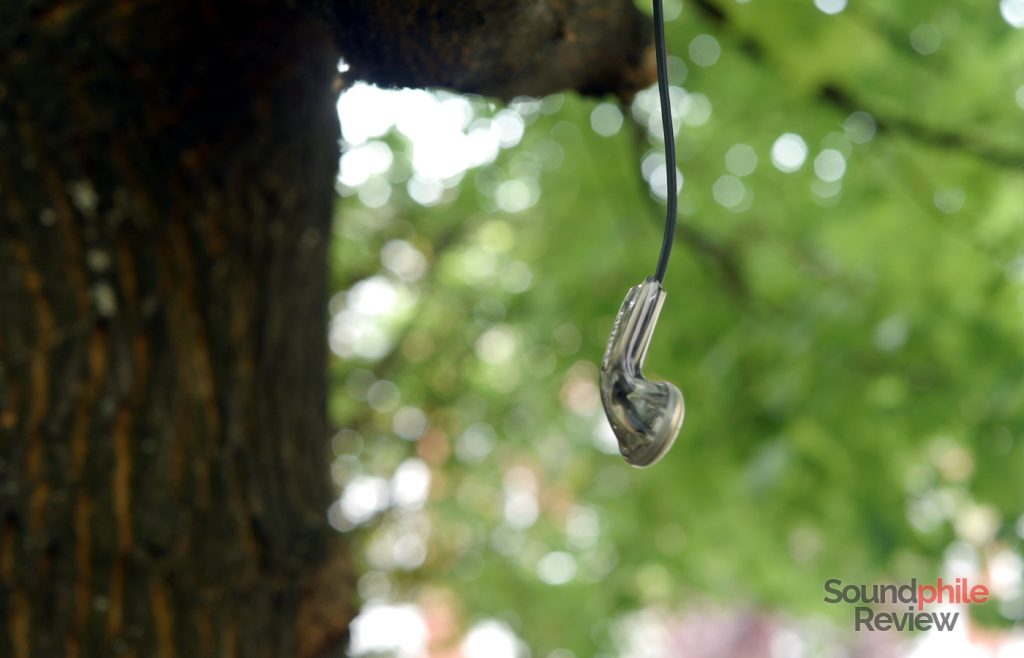 Due to their open design, passive isolation is almost non-existent. You wouldn’t want to use them on the subway, but on the street and indoor they behave quite well. I mentioned street usage as they will let noise come in, but that may in fact be positive, as you will stay aware of what surrounds you.

Burn-in time for the VE Asura 2.0 was a bit more than 100 hours. I used FLACs (chiefly 16 bit, 44.1 kHz) and MP3s (320kbps) for the purpose of this review. A Topping A30 attached to a Topping D30 provided the power while at the desk, and I tried them on the move with my Lenovo Vibe Shot phone.

Being the VE Asura 2.0’s impedance 150 Ω, I expected an amplifier to be essential in any case to get at least a passable result. That proved to be false, though, as my phone could drive them with little effort and a good volume without even going further than 50% volume. Of course there are lots of pros when using an amplifier and these are not meant to be used with a phone alone, so I recommend using something to amplify them – both bass and dynamics get better.

I also recommend using the light foams from the Ex Pack, as they seem to be the best compromise between isolation, comfort and sound. Bass is a bit louder but does not become prevalent, and comfort and isolation are up a notch to good levels.

When I review headphones it’s always a game of expectations, especially when I try different products from the same manufacturer. As I wrote in the introduction, I was curious to hear what these sounded like and I was not disappointed in any way.

Talking about expectations, I did not expect to hear such impact in both bass and mids. When I hear the beat on a drum it’s precise and fast, and this makes it awesome. I really feel like a drum is playing and it’s not just some flat noise – it’s got a shape. It is somewhat impaired by the lack of bass depth: it does not extend too deep (frequencies <80 Hz are lacking) and this makes the thump less effective. A great example is Take Five by David Brubeck: not only it is one of my favourite tracks, it’s got great drums and they are marvellous on these earbuds because of their speed.

Bass is very well textured and rich, and although it is mainly mid-bass, it does a pretty good job at providing the music with the necessary body. It won’t surround you with lots of bass like a closed-back IEM would do, but it will be clear, fast bass which does not leak into mids and does indeed get low enough to satisfy most people’s taste (hint: I am satisfied with it). The only real flaw is the lack of sub-bass extension, but it’s one that has to be expected given the nature of the earbuds and it is made up for by the quality of the other frequencies.

Mids are really the centre of the VE Asura 2.0. Midrange is a bit on the warm side and it’s rich and full, detailed and vivacious. There’s a spike in the upper range that makes it somewhat bright and a bit fatiguing in the long term, but it is tamed a bit by the foams. It brilliantly portrays voices and acoustic instruments, which appear in the foreground, with a remarkable naturalness which, in turn, renders them especially pleasant. La musica notturna delle strade di Madrid by Boccherini (as included in the Master & Commander soundtrack) sounds smooth and natural, with lots of small details and a general sense of space and ambience. It’s very likable and easy to listen to (and to get lost into, I’d say).

Treble has limited extension and this may be the root cause of the soundstage not being more open (more on that later). Highs are very detailed, even though not extremely so – I’d say the RHA T20i have an edge on the Asura 2.0 in this regard. Although the lack of extension doesn’t make it sound sparkling and vivid, treble is definitely not in the background, but it has to be noted that it won’t be in the spotlight either. There’s some positive things in the way highs are portrayed, too, since there’s no sibilance to be found and even violins are smooth.

Soundstage is relatively wide, but shallow. It extends both left and right, but is does not give me that sense of depth and three-dimensional space other headphones do. Stereo imaging is great and there’s great coupling between channels. Instrument separation is great and only the denser tracks will make the earbuds struggle a bit.

The VE Asura 2.0 look like a great match for classical, jazz, neofolk, celtic and all other acoustic genres; VE suggests they pair well with pop, and I’ll add rock on top of that. In general, they’ll fare well with all music where midrange is centre. They may lack sub-bass for electronic music, but it will sound magical anyway due to the speed and impact!

When compared to the Monks, the Asura 2.0 shine due to their superior instrument separation, better detail and presentation. They are like an overpowered Monk, with many added benefits. The only place where the Monk seem to fare better is bass, as it seems there is more (but quality is a different story).

The Venture Electronics Asura 2.0 are among the most likable headphones I’ve tried so far: their energetic and upbeat sound signature makes music fun and entertaining and their speed is a joy to hear. They’re open earbuds, though, so bass and especially sub-bass will not be on par with in-ear headphones – not even those with light bass such as the HiFiMAN RE-00.

It’s difficult to overstate things as the Asura 2.0 seem to be able to manage anything you throw at them. They’re not perfect and there are genres that may sound best with other headphones, but when taking price into account it is apparent that they’re a gem.

The Venture Electronics Asura 2.0 are priced at 78$ for the base model.

Out of the box: Fiio X3 III