KZ’s love affair with balanced armatures seems to be off to a good start. After producing loads of hybrid earphones, the company started to manufacture products with balanced armatures only and will seemingly not stop with the AS10. The KZ BA10 is a co-flagship, as it sits atop the product line together with the aforementioned AS10. It differentiates itself through tuning and design, as it is made of metal and has less of a balanced approach to tuning.

Disclaimer: this unit was provided for the purpose of this review by Linsoul Audio. They sell the product on AliExpress for $76 and Amazon at $81. 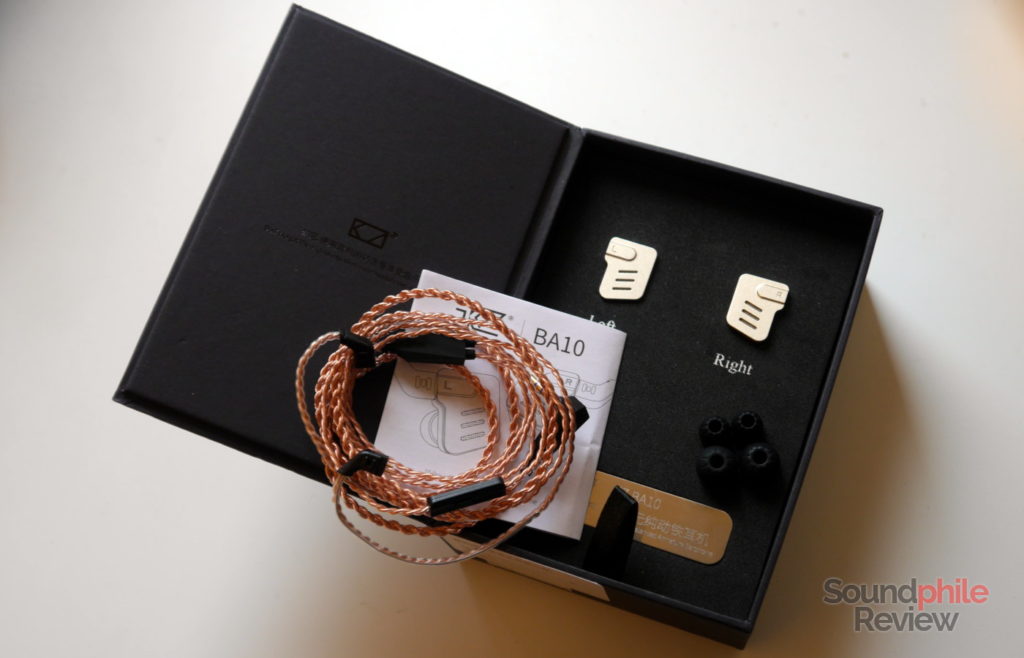 KZ chose to use the same “premium” packaging as they did with the AS10: contrary to most other products they make, the BA10 comes in a large box made of heavy black cardboard and fitted with moulded foam. The contents are, however, the same as in all other cases: a cable and three pairs of silicone eartips. 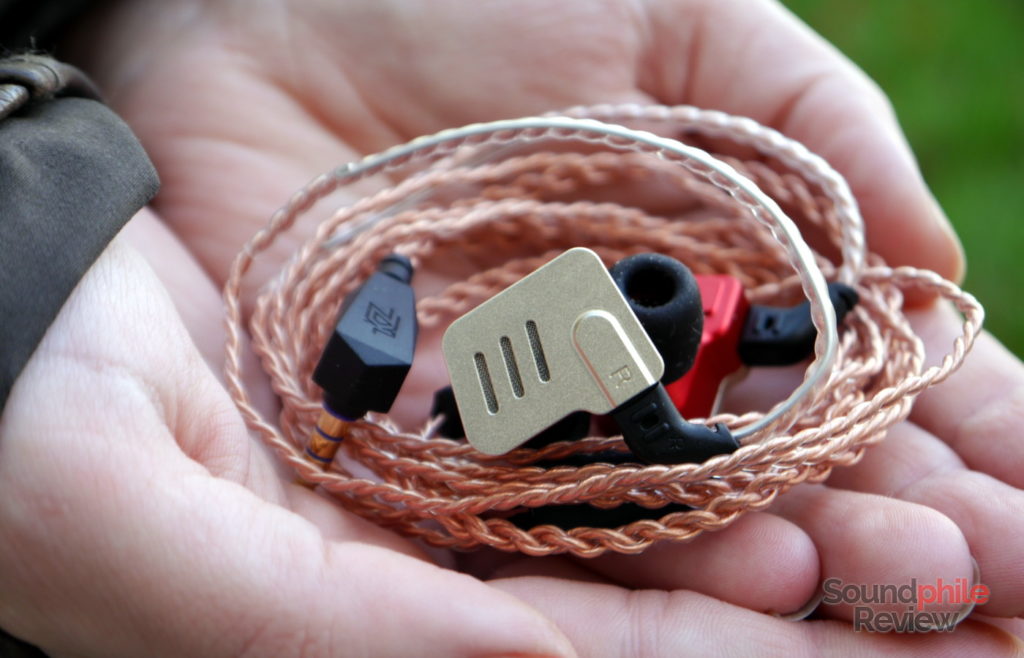 I don’t know who thought of the BA10’s design, but I would surely like to have a word with them. While it is certainly original and new, and a good step away from the shameless copying we saw with the ZS5 and ZS6, it is not practical at all. It is squared and full of clear-cut edges that cut into one’s ears like a hot knife through butter. Okay, it’s not exactly like that, but you get the idea.

The design is in fact bold and innovative and this is laudable. KZ is trying to shed off the copycat image it created for itself, so trying new designs is a good thing for both them and the consumers. The choice of colours is debatable, though, as the red and gold colour scheme chosen for this unit is a bit of an eyesore. That’s up to one’s preferences, as usual, but I would sure have appreciated more sober colours (though a black and red variant exists, too). 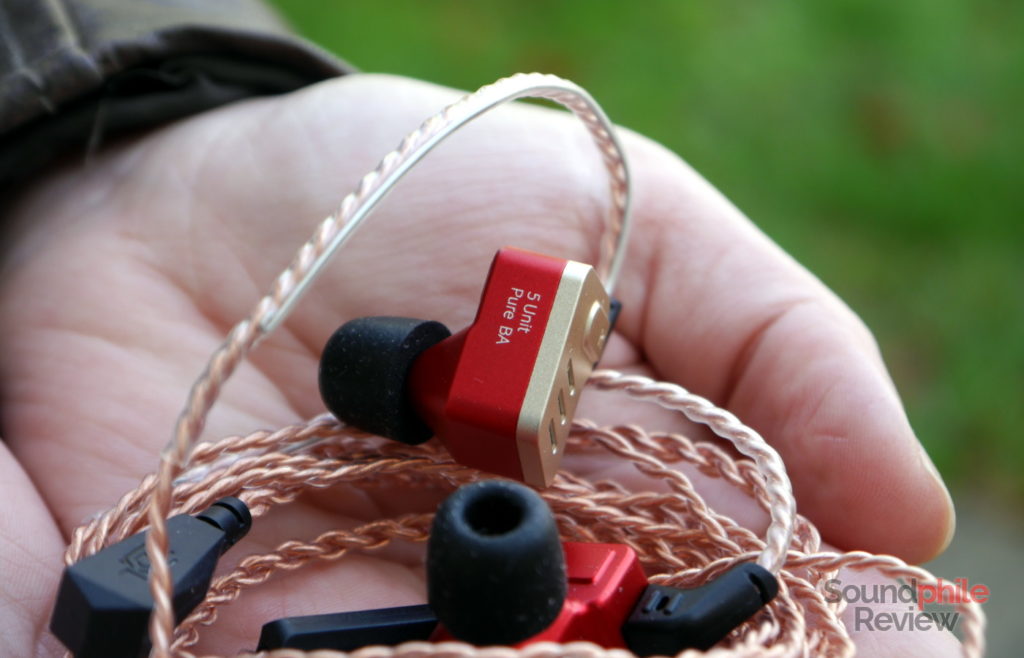 Getting the earphones on is a challenge in itself to say the least. On top of the bizarre design that makes wearing the earphones awkward (if not outright painful at times), the shape of the shells itself makes it difficult to wear them. The squared shapes, coupled with the nozzle that is not angled, make wearing the KZ BA10 a bit of a hassle. In order to get them in I have to pull the lobe down, push the earphones in and then moving the pinnae and the earphones around until I get a good fit. It’s not a good experience, even less a simple one.

Even once you get them on, the experience is not the best one could dream of. Quite the contrary, in fact: the clear-cut edges, as I have already mentioned, are the largest pain point (literally!) of the KZ BA10 as they make it impossible to wear the earphones for long periods. I personally start to feel discomfort after just a few minutes, and in half an hour that becomes plain pain. This is personal experience that can in no way be generalised, but the shapes lead me to believe that very few people – if any – can find the shells comfortable. 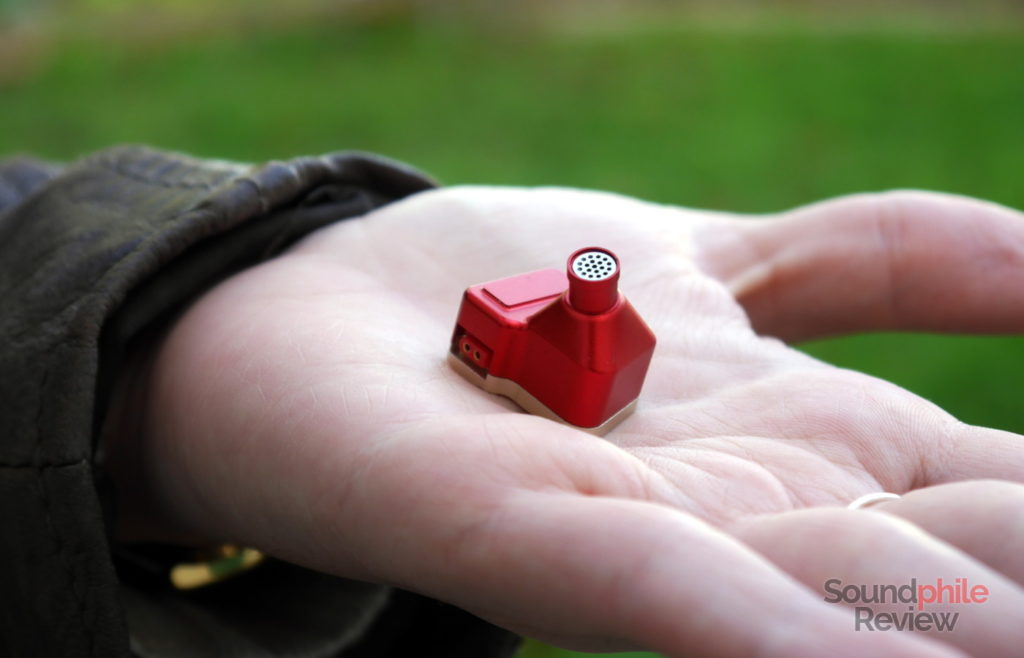 All of this happens regardless of the tips I use, and is true even when using fairly large foam eartips. There is a clear comfort issue at play here. Having that said, I think that the lack of isolation that the KZ BA10 have is at least partially related to this. The BA10 can’t in fact reduce outside noise effectively, making it almost impossible to use them in busy (or anyway noisy) places without raising the volume dramatically.

KZ opted for their usual flimsy cable, although it is not coloured and therefore it exposes the natural hue of copper. It’s not really a good cable, at least after the Y split: the cores are rather flimsy and braided so that they are very prone to kinks; in addition to this, there is a metal rod that gives the cable a shape around the ears, but it is too stiff to be truly comfortable.

If “BA” stands for “balanced armature”, then the name “BA10” is a good summary of what these earphones are: five balanced armatures per channel, with a total of ten armatures. They are similar to the AS10 in this regard, as they do not use any dynamic driver. Despite this, sensitivity is not as high as one could expect: earphones that only use balanced armatures are often in the 120 dB range, but the BA10 are just 105 dB. That won’t shield you from hearing background noises, though!

The KZ BA10 retains the same approach to balance as its peer the AS10, but it has its own twist that makes it actually a bit less balanced. This is because the BA10 has noticeably forward bass that takes the front in the scene, while leaving  midrange and treble somewhat behind. This difference is not dramatic, but it is noticeable.

KZ charges a premium for the KZ BA10, and in turn they stand out in terms of technical ability. Instrument separation is really better than in most other products by the company and it rivals with products that cost more than $100 – even in situations when there is a lot going on, clarity is not impacted and it is possible to tell each instrument apart, even hearing tiny details that would normally be lost in the mix. As a practical example, in Senza Paura by Ornella Vanoni, Toquinho and Vinicius De Moraes, it is pretty easy to hear the two singers singing along despite Toquinho whispering and being almost inaudible. Soundstage is wide and deep, defeating the closeness that often characterises in-ear headphones and presenting the listener with a stage that extends around him – please mind that you won’t hear things as if they came from speakers, as the sound will come from your ears, but you won’t feel as if it came from inside your head. Imaging is also very good, as it allows to locate instruments with decent precision.

Bass is in fact prominent and evidently boosted, with a bump around 90 Hz and a slope that reaches down to 20 Hz (though the volume is limited at that point). This gives bass a bit of physicality, which is also aided by the fact that it is fast enough to have that “thump” effect of impact with drums and similar instruments. Quantity is certainly not in the range of neutrality, as it sounds more present than it should. This does not, however, sound either excessive nor bloated. KZ managed to add an amount of bass that adds to the sound, but without it being invasive and therefore detracting from the pleasantness of music. This is quite an exception in KZ’s production, as they often exaggerate and end up with completely unbalanced signatures. Bass has enough detail to allow for different instruments to be distinguishable even in complicated situations.

Although KZ did not achieve perfect balance, the BA10 has a decently neutral midrange that comes out as pleasant and relaxing, thanks to its smoothness and added warmth. The midrange appears slightly V-shaped, with the lower section being a tiny bit more emphasised than the upper area; this emphasis is however very gentle and does not leave the middle area in the background, rather just adding a bit of emphasis on instruments that focus on the two areas. This means that no instrument comes out decidedly on top of the others, but some instruments are a bit more vivid (e.g. brass instruments, electric guitars, or the glockenspiel in Mike Oldfield’s Finale from Tubular Bells 2003). The level of detail is unexpectedly good, as KZ managed to craft the balanced armatures so as to deliver lots of small details and nuances that are not usually found in this price range. Speed is also appreciably fast, as transients seem to be accurate and there’s the same sense of impact given by bass.

There is a bit of emphasis on treble, too, as it can sometimes appear sharp and fatiguing. One such case is Massive Attack’s Pray for Rain, where the initial whistle is almost piercing and surely fatiguing. There is therefore a spike, though in general highs appear well made: despite this hiccup, there is no extreme spike that ruins the listening experience (à la KZ ZSR), nor a steep slope that make highs disappear all of a sudden. On the contrary, they seem to behave pretty well as the roll-off is gentle enough to lend the upper range some breathing space and therefore making extension decent. Detail is indeed remarkable: KZ managed in crafting balanced armatures that can portray even minute details, such as the crackling of the record in Splitting the Atom from the same album of the previous track. This level of detail is really laudable in earphones under $100 and is completely unexpected in a product by KZ.

Given the peculiar signature of the KZ BA10, recommending genres that go well with these headphones becomes a difficult task. It’s in fact a signature that an be good for most genres, although the added bass may not suit everyone’s taste.

The following is a comparison with selected earphones (I mainly used tracks from the Powaqqatsi soundtrack by Philip Glass to run this comparison):

It is a bit of a shame that KZ opted for such a bad design from a comfort perspective, because the KZ BA10 are really great when it comes to sound. They are not as balanced as the AS10, but they counter that with incredible technical prowess. They are astonishing in their technical ability, considering the price bracket they are in. Bass depth and punch, detail, soundstage and instrument separation are all elements that set these earphones apart from KZ’s production – and in a very good way.

The only real downside of the BA10 is their design that makes them incredibly uncomfortable. Were it not for this fact, they could easily be the best earphones made by KZ alongside the AS10 (which come out as the best because of their comfort, given their similar sound signature). It’s a missed opportunity in this sense, but they are absolutely worth a shot if you can live with a bit of discomfort or if you find yourself comfortable with their shape.