1More is the latest company to join the ranks of those who manufacture Bluetooth headphones with a neckband design. Their first such product, the 1More Triple Driver BT, is the exact same as the wired model that has garnered a lot of attention and praise from both public and critics, but it cuts the wire and adds a few interesting options in the meantime.

Disclaimer: thank you to Thomas at 1More Europe for sending a free unit! More information about the headphones on 1More’s website. They sell for $149.99. 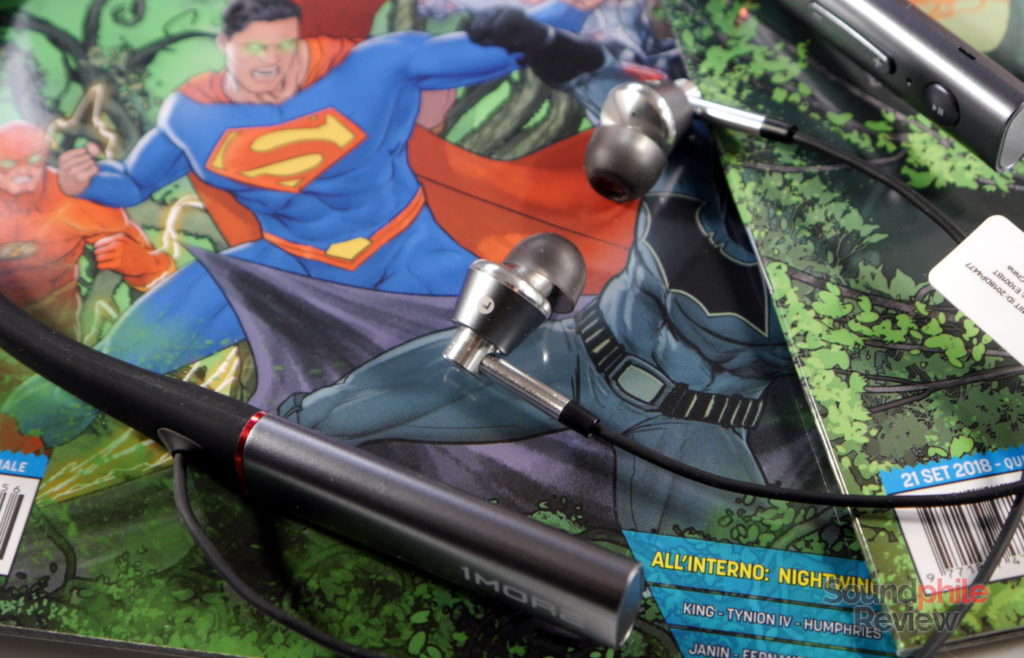 In terms of design, the 1More Triple Driver BT do not really bring anything new to the table. They use the tried-and-true neckband approach that places everything in the neckband itself, including controls and microphone. The two ends of the neckband are made of solid plastic with a grey-silver finish, while the part connecting the two is made of black rubber.

The right side is perfectly clear, leading me to believe it hosts the battery, while the left one holds all of the controls. Contrary to the RHA MA750 Wireless, the 1More Triple Driver BT has all of the controls on the neckband: there is a power button, a play/pause button and the volume rocker. The microphone is also near the buttons. The terminal part also has a lid that conceals the USB Type-C port used to charge the battery. 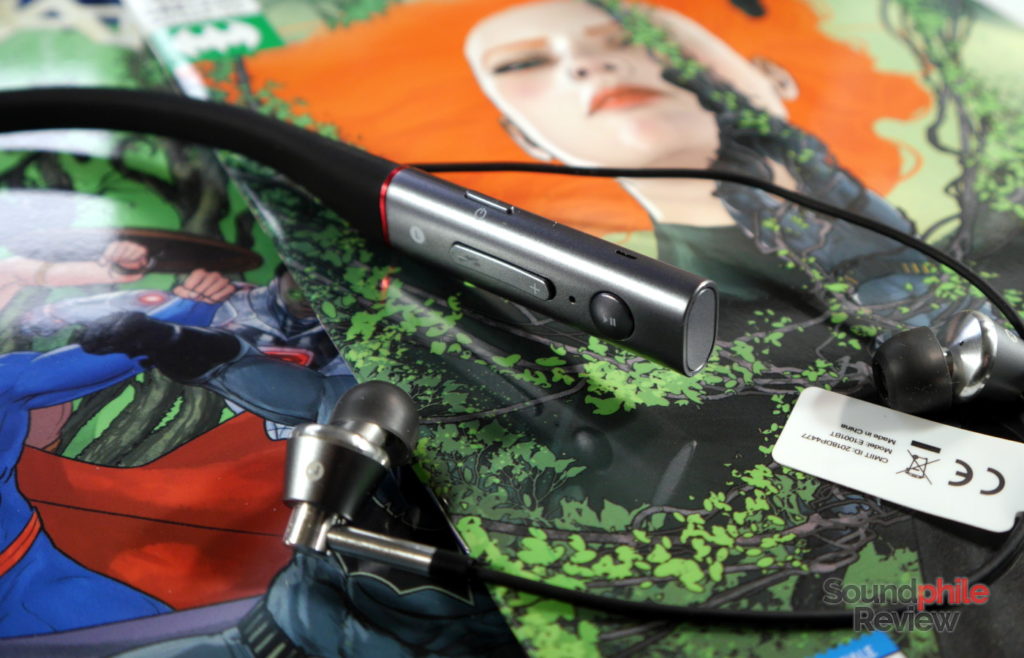 Assembly is pretty good. Although the RHA appear better built, probably thanks to the metal parts and the use of a single material for the whole neckband, the 1More Triple Driver BT are in fact put together in a way that leaves little room for concern about their durability. That’s speaking about the neckband; the earpieces are solid metal and are built like a tank. 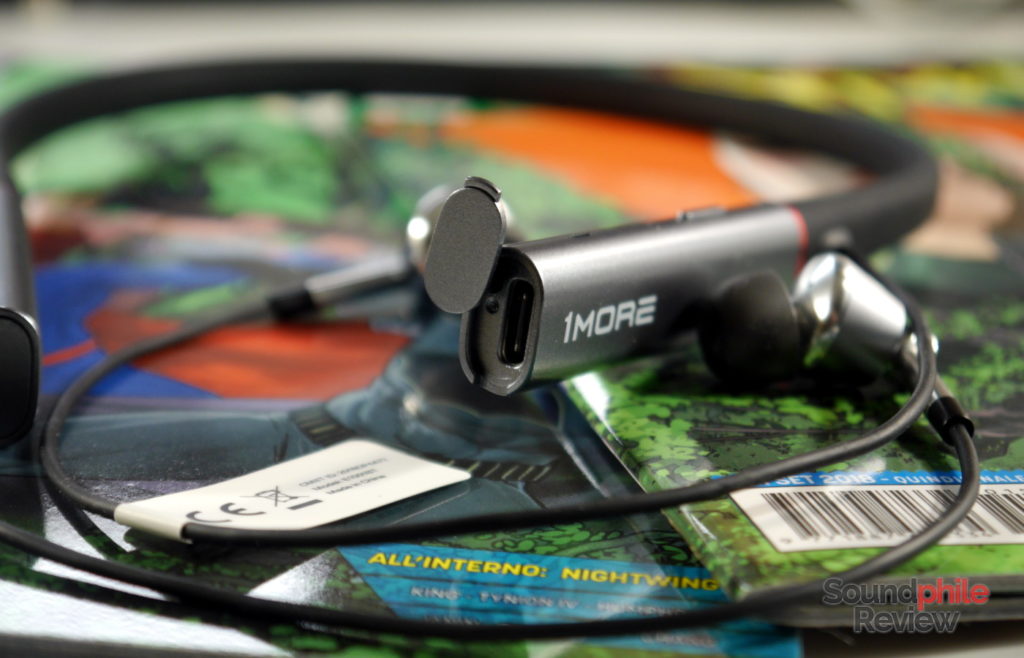 The only thing that is truly missing is a way to keep the earphones together. They are not magnetic nor have any hook one can use to secure them to clothes, so they tend to move around quite a lot when not in use. One solution is to tuck them inside the collar of the shirt, but that’s not ideal.

The cables that connect the earphones to the neckband are roughly 25 cm in length. This is actually enough to leave even some room for movements. I never felt more was necessary. Apart from this, comfort is definitely good and the only limit is battery life. The earphones themselves are quite comfortable, especially with foam eartips.

Despite the recent trend being that of including NFC on Bluetooth headphones to make pairing simple, the 1More Triple Driver BT do not include that. They do use Bluetooth 4.2, though, which is fairly recent and offers wide compatibility.

In addition to the aptX, aptX HD and AAC codecs, the 1More Triple Driver BT also sport Sony’s LDAC which promises far better quality than alternatives. According to Sony themselves, the codec offers enough bandwidth to allow almost standard resolution FLACs untouched – it is roughly 1 Mbps (990 kbps, to be precise). It means the signal should not be all that different from that of wired earphones, even though the impossibility to reach hi-res bandwidth levels remains.

A voice informs you of the status of the earphones when you power them on, giving you information about the battery. There is, however, no way to retrieve the charge left after that if your phone does not support transmission of that information.

Volume can be adjusted independently of the source, and this allows for finer-grained control in most cases. That is especially true if you have an Android device, as they are often painful in managing the volume of Bluetooth devices.

The microphone works remarkably well, despite its placement on the neckband. It won’t work perfectly in especially noisy situations, but it will work – and that’s more than many Bluetooth earphones can claim. 1More really did a good job in this respect as the voice is (almost) always clear.

Out of the 7 hours declared by the manufacturer, the 1More Triple Driver BT offer 5 or 6 hours of battery life (with mixed usage including music playback and calls). This is not a stellar result, and it is actually a bit disappointing as it does not even cover a whole day of usage. Relying on these headphones as the only sources of music can be a bit of a hazard if one plans to use them heavily.

On the positive side, though, battery drain while in standby is close to none: in 12 hours it is approximately 10%, which means one can forget them on without worrying about charge too much. This is relevant as the earphones will not shut down automatically as long as they are connected to a source. This is useful if one wants to use he Triple Driver BT to manage calls, but it also has the drawback of draining the battery in the long term.

The 1More Triple Driver BT is exactly the same as the wired model from an acoustic perspective, as the earpieces are in fact the same – they are just strapped to a Bluetooth neckband. Therefore, I recommend you to read the wired 1More Triple Driver review as there you will find all the relevant information on the subject.

Not always are wireless versions of successful earphones equally good. The 1More Triple Driver BT are, though. They have a few flaws, such as the lack of a vibration motor and a relatively short battery life, but these are offset by great sound quality and well-thought design of the neckband.

The 1More Triple Driver are great earphones, and the Bluetooth version is not less remarkable. If sound quality is paramount, then these are an incredibly solid choice. If we take other factors into account, such as battery life or ability to effectively use them for more than listening to music, then other options could be better.