To many peoples the god of the Sun was also the main god in a pantheon, but that’s not true for the Greek mythology, which had Zeus as the main god and Apollon as the god of the Sun. This is relevant here as the first headphone model by Linsoul-owned HarmonicDyne was named Helios, whereas the new, higher-tier model was called Zeus. The HarmonicDyne Zeus is an improved version of the Helios, with a more balanced tuning that offers warmth and relax. It may not be perfectly neutral, but it’s definitely enjoyable!

Disclaimer: Linsoul kindly sent me this unit for free. The HarmonicDyne Zeus retails for $350. 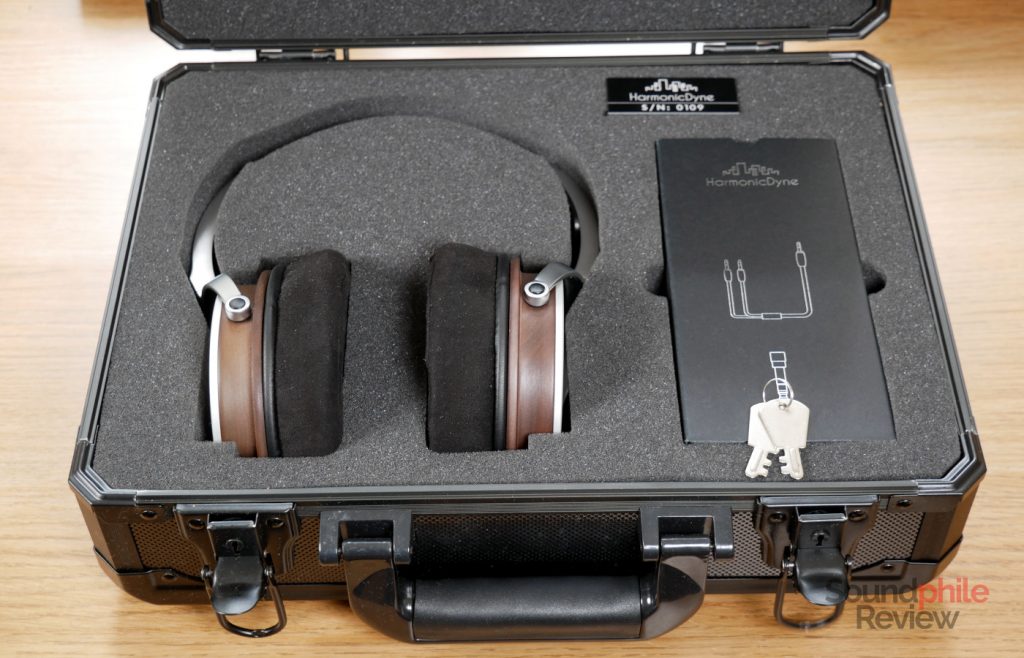 I’m not usually one to spend much time talking about accessories and packaging as I find them to be a relatively unimportant part of the experience, as long as it’s half decent. HarmonicDyne really surprised me here as the Zeus come in an absolutely incredible packaging for the price they’re in. They come in a metal suitcase with abundant foam padding that keeps them safe. The case can be locked thanks to included keys. It’s honestly rare to see this level of care in making the packaging even at $1,000 price points, so it’s flabbergasting at $350. The suitcase is quite solid and it took quite a beating in the shipment from China to the UK, but it came out largely unscathed. The accessories include a manual, a cable (on which I’ll spend a few words later) and a 3.5 mm to 6.3 mm jack adapter, which I found to be ineffective as it doesn’t clamp the 3.5 mm jack enough to stay attached to it when you take the cable out of the amplifier.

I would say that HarmonicDyne has absolutely nailed how to make a great packaging that surely impresses the buyer. I hope other brands take note and deliver a similar level of care, at least when they are asking more than $500 for their products. 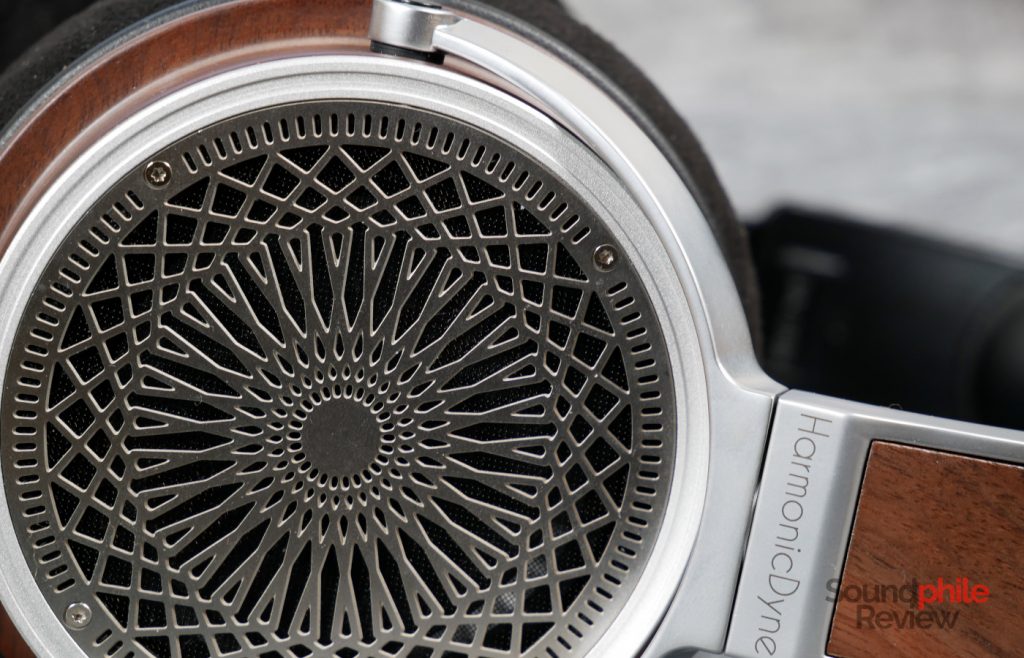 Everything about the physical aspect of the HarmonicDyne Zeus is identical to the previous headphones, the Helios. They use the same frame, the same headband, the same earcups, the same padding. As they say, you don’t change a winning squad and Linsoul appears to have learnt this lesson. There were margins of improvement, though, as the finish of the earcups is the same (and I didn’t quite like it the first time around, so I don’t this time either) and the weight is still considerable. 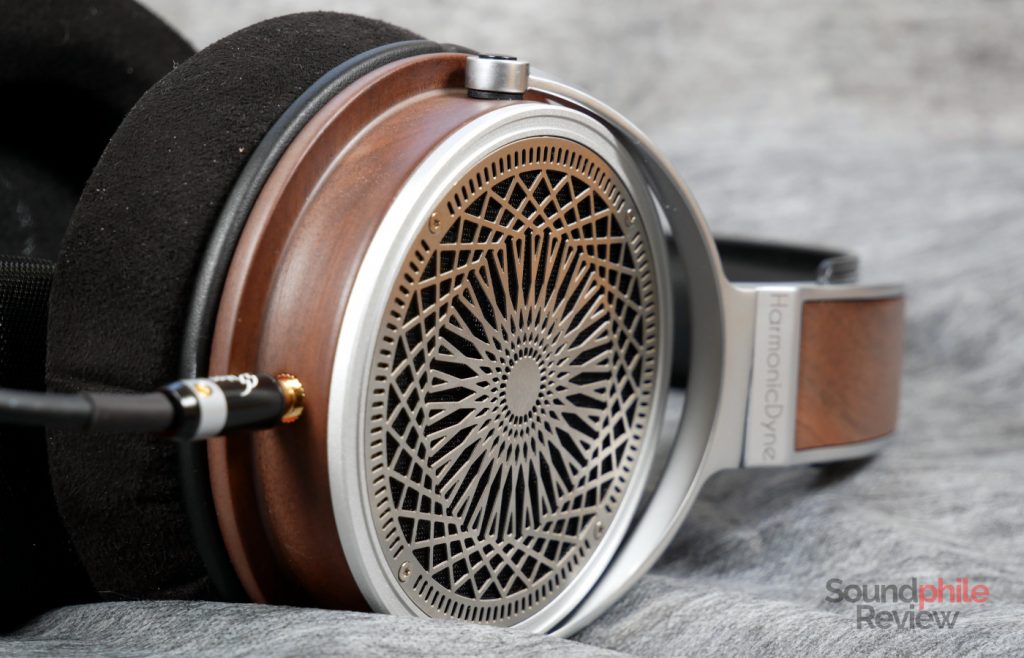 There is one major difference that has been introduced with this model though: the design of the metal plate on the earcups, which I absolutely love. It reminds me closely of a rose window in a gothic cathedral and being that one of my favourites architectonic styles, I really appreciate this stylistic choice. 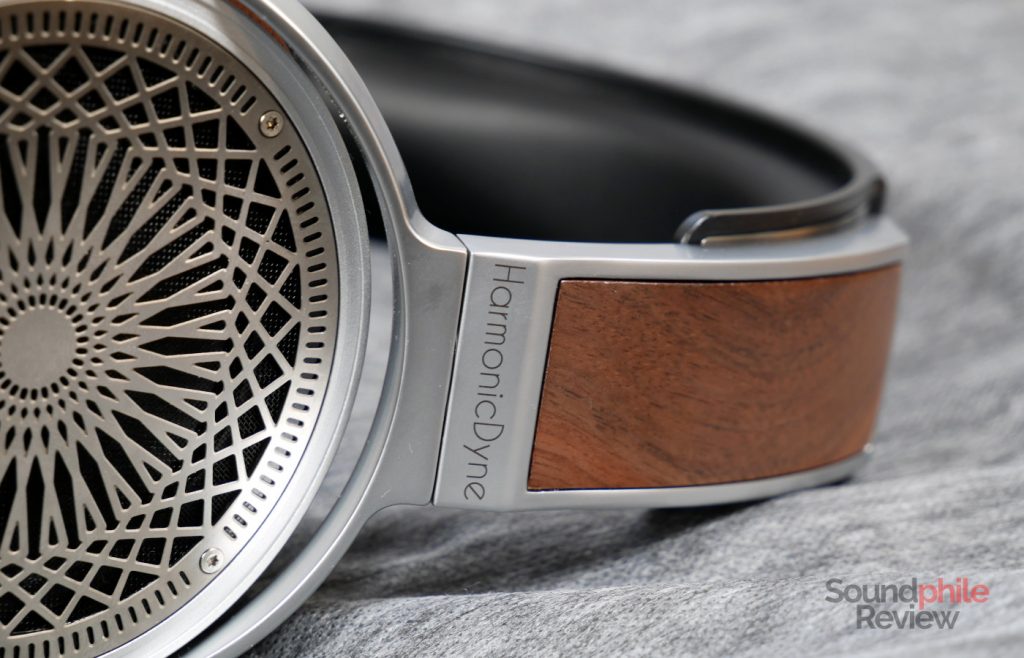 The headphones are built with metal and wood, with plastic being only used in the black part of the headband: the rest is all metal. This makes the HarmonicDyne Zeus quite strong and (hopefully) durable, and surely it makes them look great. 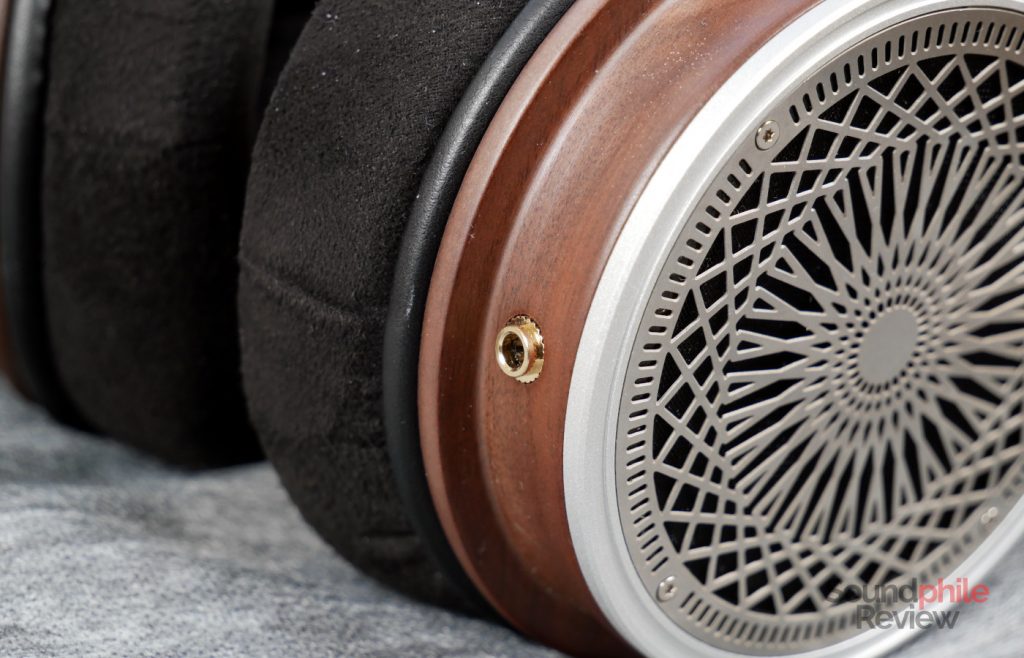 In terms of comfort, I find the HarmonicDyne Zeus to be a great compromise between having a bit of side clamp that helps keeping them up and this clamp not being such that it causes discomfort. The headband and earpads are also quite soft, so they help with that. I feel like my head is held with care and respect, so even my very sensitive scalp doesn’t complain too much (which, believe me, is quite something!). I can wear them for a few hours a day and I am still fine, so most people will probably be able to wear them for a couple of weeks uninterruptedly and not feel them. Maybe that’s too much, but you get the idea. 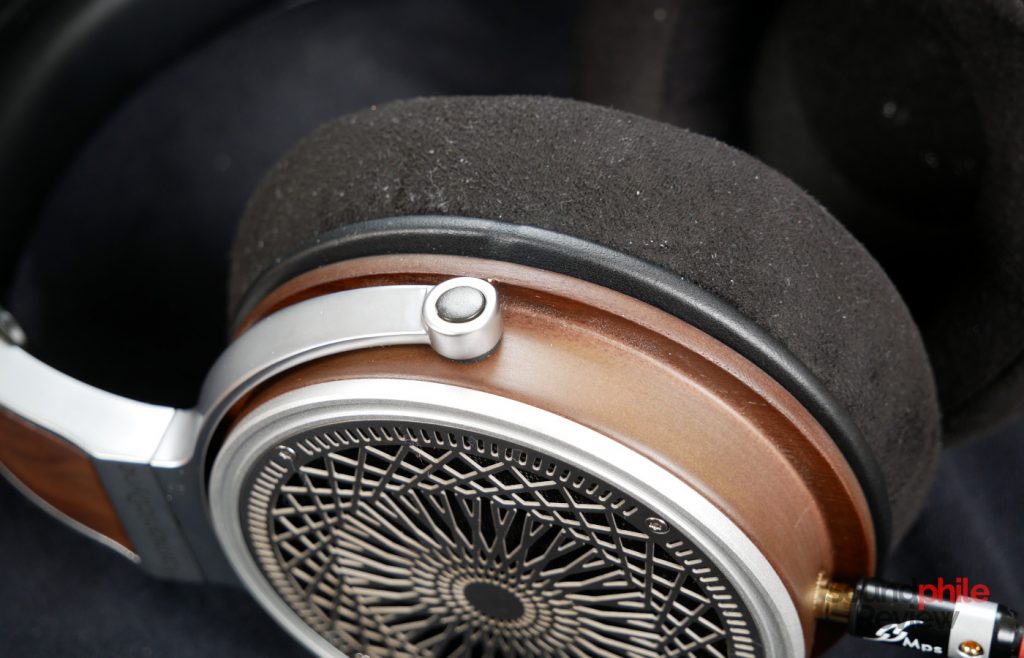 Isolation is, of course, null. My GMMK keyboard with Gateron Black switches, which are relatively silent, is still clearly audible as I type this while wearing the headphones. This is expected though, given the Zeus are open-back. 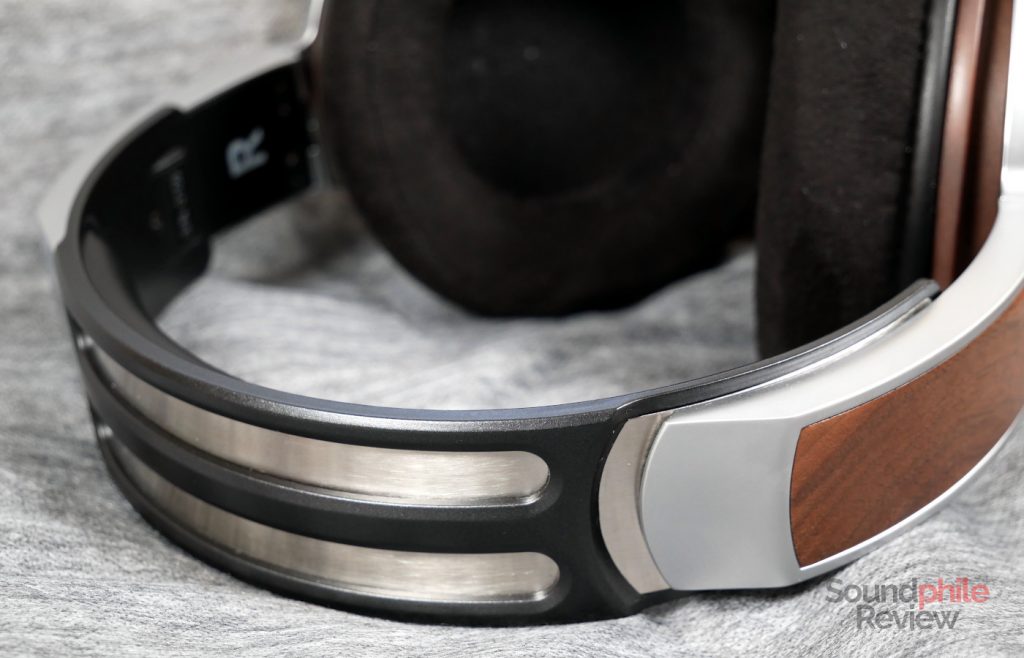 The HarmonicDyne Zeus come with a very nice and well-built cable: it’s actually two large cables in the same sleeve between the jack and the Y-split, so it’s quite large. It’s covered in a plastic sleeve that looks and feels solid and durable, while the terminations are made by Mps and wouldn’t feel out of place on flagship headphones in terms of finish. 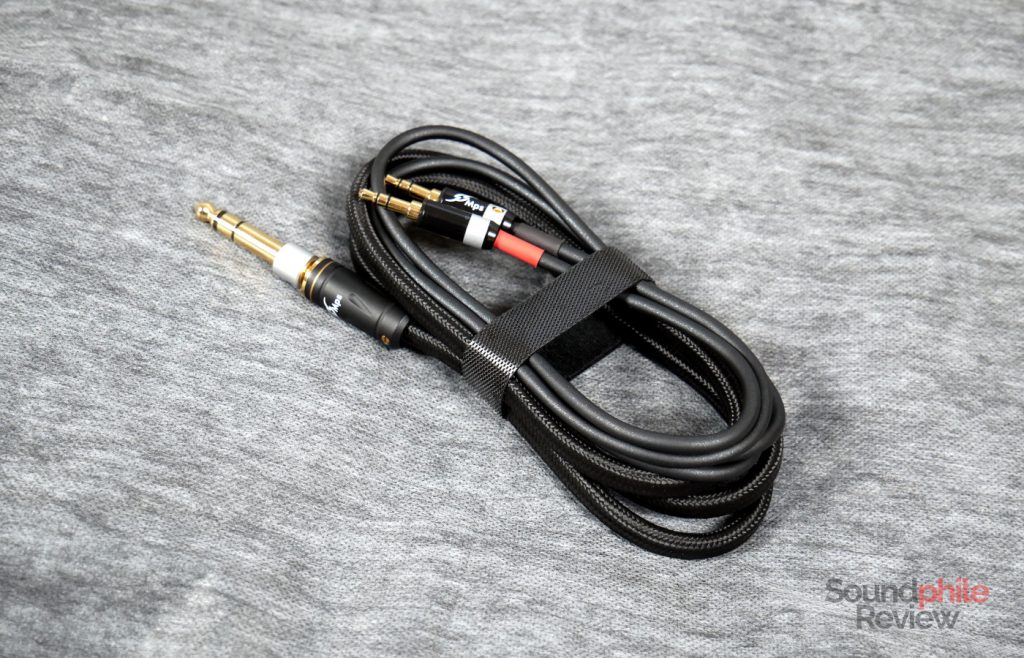 Speaking of which: this is a proper cable. This is actually the kind of cable that feels premium and durable, so it’s what you would want for top-of-the-line headphones. If you’re reading this, HiFiMAN, take notes: the cable we want for $1,000+ headphones is like this, not like the catheter-like thing you sell. I’m done with the rant.

On the other hand, though, the cable also has its flaws. The plastic sleeve is quite stiff on its own, and the fact that the cable is actually made of two cables conjoined means that it is even stiffer – especially if you try to bend it sideways. It also comes with kinks due to the way it’s packaged, and it’s quite difficult to straighten those out, all of which adds to it being difficult to manage. This stiffness also causes a fair bit of microphonics, so that moving your head around causes a lot of noise due to the cable rubbing against the clothes. The last bit is more cosmetic than anything: for all the feeling of quality the rest of the cable has, the Y-split is made with heatshrink: practical and light for sure, but not beautiful.

I tested the HarmonicDyne Zeus using mostly a Topping DX7 and a Drop THX AAA 789, plus an iFi micro iDSD Signature. Most source files were FLACs in 16 bit, 44.1 kHz resolution.

At first I thought the Zeus to be entirely open-back, due to the way they seem to be built. The way they sound, though, made me think they may actually be semi-open (or, conversely, semi-closed), as their soundstage is closer to that of closed-back headphones than to that of open-back ones; not only that, but the sound feels like it’s closed, with the same sensation of reverberation and enclosed space around your ears. Imaging is quite accurate and I’m able to point at specific locations for each instruments, which is quite interesting at this price point. Instrument separation is very good, though the signature makes some instruments less easy to discern.

The HarmonicDyne Zeus offer a warm, bassy signature with that warmth being mostly concentrated in the mid-bass area, but also with enough depth to let you feel it. Bass is emphasised and gives this noticeable touch to the sound, but overall it’s well-behaved enough that it is unobtrusive and doesn’t distract you from the rest of the signature. Transient speed is fast enough for two things to happen: there’s a moderate physicality and there’s a very good amount of detail which stays even when playing complex tracks with different layers. One thing I really like about the Zeus is that they’re quite dynamic, so they are able to paint a very detailed picture even of instruments that are quiet and in the background while something else is going on in the foreground.

Midrange is influenced by the larger presence of bass in that the emphasis on bass slowly wanes towards the lower midrange area, which stays emphasised compared to the ideal neutrality. Still, this emphasis is not excessive and therefore it ends up being pleasant and enjoyable rather than overwhelming (as is often the case). Acoustic instruments and male voices in particular benefit from this as they sound full and natural, almost with a wooden quality to them (for lack of better words). This emphasis on the lower part is not matched by another on the upper one, so the midrange comes out as very relaxed-sounding and inoffensive – sometimes even a bit too much, as a bit more bite in the upper area would make electric guitars more lively. In terms of detail we’re looking at a very good retrieval, even in crowded tracks where multiple instruments overlap; the Zeus are able to provide a clear picture where you’re able to distinguish the details of the various components easily and with little (if any) blurring.

Treble is very relaxed and inoffensive, sometimes even too much for my tastes. Due to this, these headphones are great for those who are more sensitive to higher frequencies. The highs are quite easy to listen to, but on the other hand I feel like sometimes they can sound a bit blunted and lacking vitality and incisiveness. They offer good extension, which makes them quite rich and airy. I can’t hear any apparent peaks that would make them fatiguing and harsh; on the contrary, they’re quite tame and appear to my hearing as relatively linear (and the key here is “appear” and “to my hearing”). Detail is quite generous and reachable even in crowded tracks, so it makes cymbals, crashes and the other instruments rich and lively.

Here’s a brief comparison with other headphones:

The HarmonicDyne Zeus are highly enjoyable headphones from start to finish. The build is the same as the previous model, the Helios, which is a good thing in terms of build quality and comfort (but a bit less in terms of size). Their tuning is relaxing and laid-back in a way that makes it highly palatable, with good technical ability on top of that as well. They’re not headphones for those who are looking for an extremely accurate frequency response, but they are quite satisfying nonetheless. The HarmonicDyne Zeus are great if you want to just relax while listening to your favourite tracks and enjoy a bit of added warmth in the mix – they’re a bit like the comfort food of headphones, but in a very good way. And since we all need comfort from time to time, I’d say these headphones are able to give you just that.