Helios is the Greek name for the Sun and it’s also the name HarmonicDyne, a new contender in the headphones arena, chose for their first product. A bold name, maybe, and also one that I thought was connected to the signature – as the Sun is bright, so I thought were the HarmonicDyne Helios. They’re not, opting for a more traditional V-shaped approach instead.

Disclaimer: Linsoul kindly sent me this unit for free. The HarmonicDyne Helios retails for $179.

The packaging was quite simple, not to say spartan: the cardboard box only held the headphones and the cable. If that’s a measure to cut costs, I’m all for it! 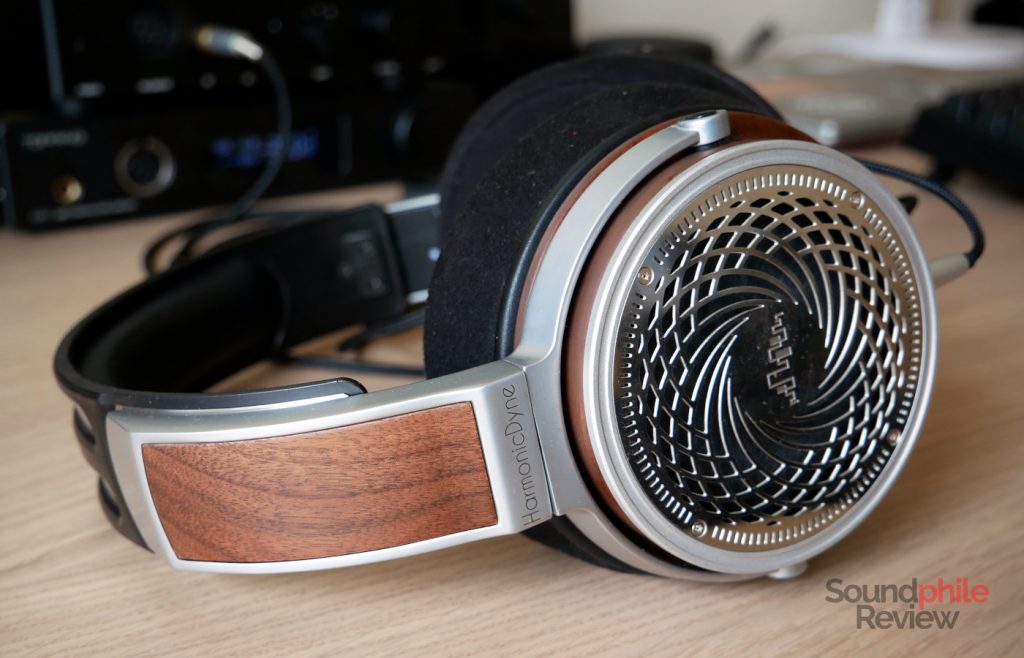 HarmonicDyne takes pride in offering real wood and solid metal for the construction of the Helios. That’s in fact not an usual sight in low-price headphones, as those materials are more often found in higher-tiered products. This choice means that the looks are quite striking, while keeping some sort of elegance. I think the design is quite polarising as it is quite unique, with the earcups covered by a metal sheet with a peculiar decoration and HarmonicDyne’s logo. 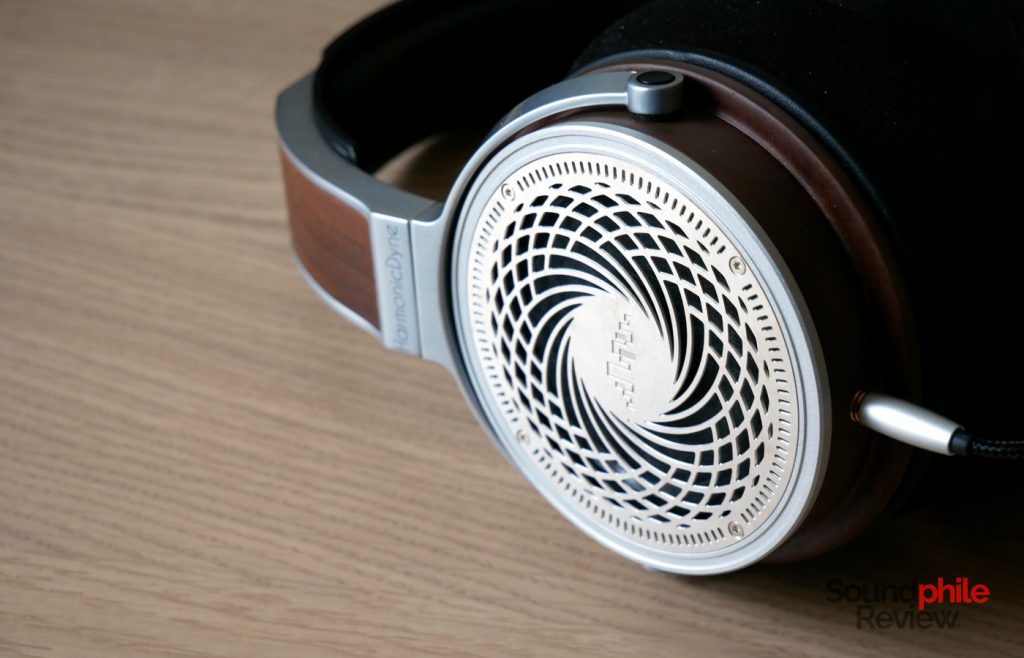 The juxtaposition of metal and wood is quite nice and helps keep the design lighter than it would otherwise be. The frame is frankly massive, which is another thing that you could like or not. The frame is entirely made of metal with some plastic pieces used mainly for decorative purposes. That’s not usual at this price point, so praise to HarmonicDyne for doing this.

I must admit I’m not especially fond of the finish of the earcups. The wood appears matte and grainy, almost as if there was a veil applied on top. This makes the otherwise nice wood appear cheap and almost plasticky. Some work can probably make it look much better, with just a tiny bit of sanding and varnishing leading to a better result, but this should not be necessary in the first place in my opinion. 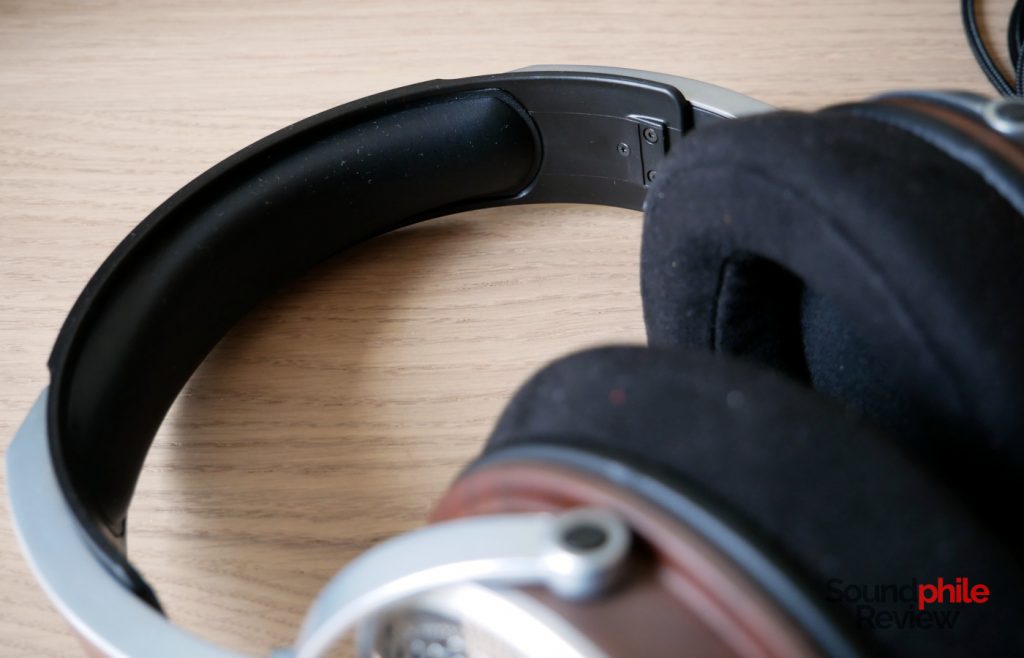 Despite the large size, the HarmonicDyne Helios are not exactly light at 448 g (with the cable). Despite this, they offer a good level of comfort: although they are quite large, the generous cushioning make the Helios stay comfortable even after a few hours of use, which is actually quite remarkable. The earpads surprised me with how comfortable they are, as they are soft yet firm enough to keep the cups in place; they’re also covered in what looks (and feels) like Alcantara, which adds to the sensation of softness. 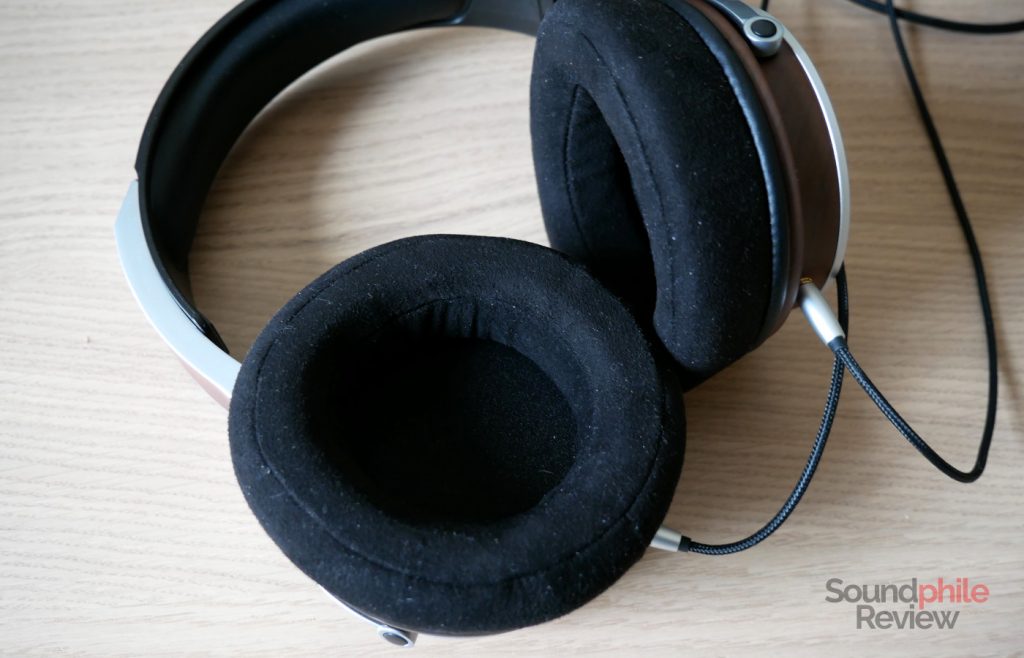 As they are  completely open, the HarmonicDyne Helios offer no passive isolation whatsoever. Not only do they not block sounds from entering the cups, but they don’t block them from going out either, so they’re not recommended for use in places where music can disturb other people (e.g. libraries, offices, etc).

The cable I got with the headphones is unremarkable, though in a good way: in terms of design it doesn’t really stand out, being covered in a black fabric sleeve, while from a functional standpoint the cable is quite soft and malleable, which helps make it comfortable to use. The 3.5 mm jack has a screw thread so that you can screw on an adapter to a 6.3 mm jack. At around 2 metres it is quite long, so there’s abundant length to use it in a variety of contexts. Linsoul’s website mentions that a balanced cable should be included, but it was not in my case.

I tested the HarmonicDyne Helios using a variety of gear, including an iFi nano iDSD Black Label and a Shanling M2X. I mostly used files in FLAC format and 16 bit, 44.1 kHz resolution.

The HarmonicDyne Helios offer a traditional V-shaped signature with emphasised bass and treble and relatively recessed midrange. Treble is especially prominent and stands out from the mix. The headphones are based on a 50 mm driver design which the company touts as being engineered in Germany. There is no information on the materials it is made of, except for the fact they’re composite. Impedance is quite low for full-sized headphones and makes it possible to use any device to power them, including mobile phones and notebooks.

One peculiarity about the HarmonicDyne Helios is how the drivers are positioned: they are angled so that they are partly facing forward. This is usually done to get a larger soundstage and improve imaging, as the angle imitates the diffusion of sounds typical of speakers. This theoretical premiss holds true in practice, as the Helios do in fact present you with a wide and decently deep soundstage and with accurate imaging; layering is what impresses me the most though, as there are various layers of depth that remain clearly separated. Instruments are well separated and retain their own individuality even in relatively complex tracks, with little mash-up; this is a testament to the good engineering of the drivers, as they are capable of reproducing quite a vast array of instruments with little effort.

Bass is powerful and deep enough to be felt and not just heard. Although it does not hit the deepest notes, it reaches ~40 Hz effortlessly, so it has quite a kick and the necessary depth to be immersive and strong. This is especially satisfying with electronic music, with tracks such as Monument (T.I.E. version) by Röyksopp that pack a punch and make you feel completely surrounded by the bass notes. On the other hand, though, bass becomes quite prominent in tracks such as Roberto Olzer’s Every Little Thing She Does Is Magic, with bass notes that emerge quite clearly from the mix; although they don’t cover the mids, they tend to still be more present than ideal. What I especially like, despite the emphasis, is that bass appears agile and fast, so it portrays even smallish details (e.g. the fingers on the strings or the hit on the drum) with very good accuracy. Detail is in fact what I like the best in the Helios’ bass.

Midrange is inevitably caught in the crossfire and is therefore recessed. The good news is that it is still quite audible, so even though it sounds a bit distant it’s still easy to hear the various details and instruments playing. Again, instrument separation remains one of the strong points of the Helios even in this area. Like many other V-shaped earphones, the Helios exhibit a bias towards the upper region of the mids, with high-pitched instruments such as violins and bagpipes (e.g. in Shantalla’s Finbar Dwyer’s / Paddy Fahy’s / The Little Hills of Offaly) being especially present. This does not detract from the general signature, though, as it just adds some zing and vivacity to the music without altering the overall balance excessively. Female vocals are also more vibrant, without this subtracting from male vocals. What I’m quite surprised to hear is the amount and quality of details, which are frankly astonishing at this price point.

Treble is heavily emphasised, but thankfully it’s not fatiguing as a result. The emphasis involves all parts, but the lower and middle areas are the most prominent and stand out more; HarmonicDyne tuned the Helios avoiding the classic spike in the lower area followed by a rapid decline, so treble actually appears relatively balanced internally. The decent extension means that it is relatively airy and open, plus it sounds quite rich and varied. Detail is commendable for headphones in the sub-$200 range.

Given they’re using dynamic drivers, I decided to compare the Helios to some well-known and similarly priced dynamic headphones:

The so-called Chi-Fi world seems to often go with tried-and-true tunings that appease the mainstream users who want powerful lows and emphasised highs. The HarmonicDyne Helios follow this tradition and offer a “safe” tuning for most people: it goes well with many modern genres like electronica, hip-hop and derivatives, pop and so on. This also means, though, that genres such as jazz and classical music, among others, won’t sound as good as with more balanced headphones.

If you are looking for well-built headphones that offer a fun-orientated tuning, the HarmonicDyne Helios are quite surely an interesting proposition. Their design is also quite unique, which is a welcome change. I don’t really see any blocking negatives for the Helios, which given their price deserve to be defined as great.