If you follow this blog, or if you read one of the many audio-centric blogs on the Internet, you may have read the name Linsoul quite often recently. This company is apparently sending samples to reviewers and influencers across the globe to boost sales on their store. But the company also sells earphones under their own brand, and the Linsoul BLD are earbuds that cater specifically to the audiophile crowd, at least because they use balanced connectors. But that is not the only reason!

Disclaimer: Linsoul sent this unit as a free sample. The Linsoul BLD are available on AliExpress and Amazon at ~$38 for the 2.5 mm version and ~$43 for the 4.4 mm version. 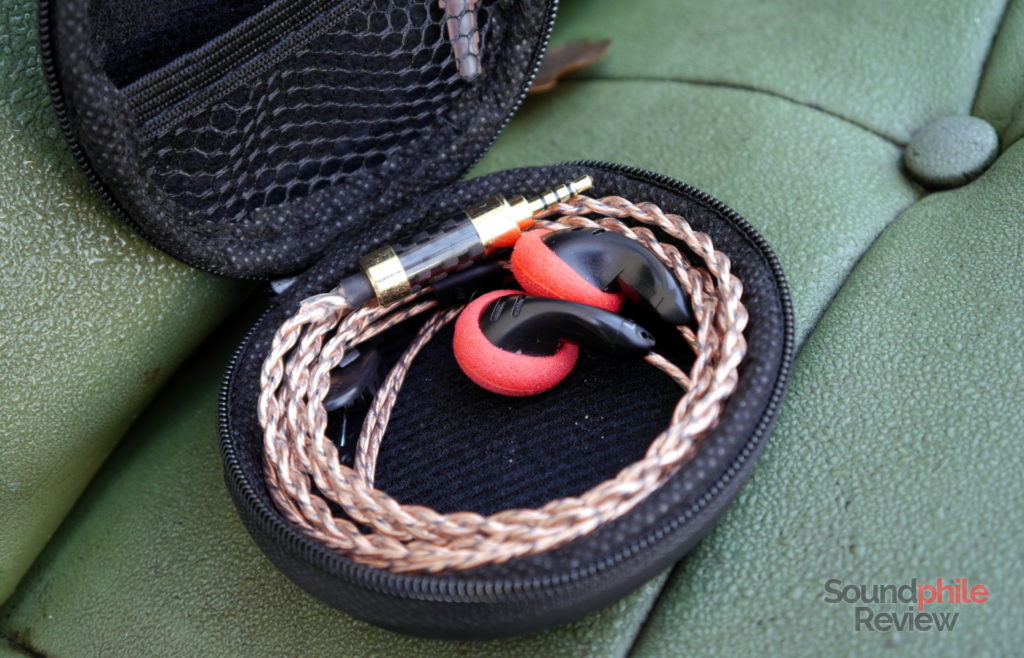 When I got the Linsoul BLD, they came inside their hard carrying case without any box. The (black) case held the earbuds, four pairs of foams and a shirt clip. Considering the price the BLD are sold at, this is a really good accessory set. 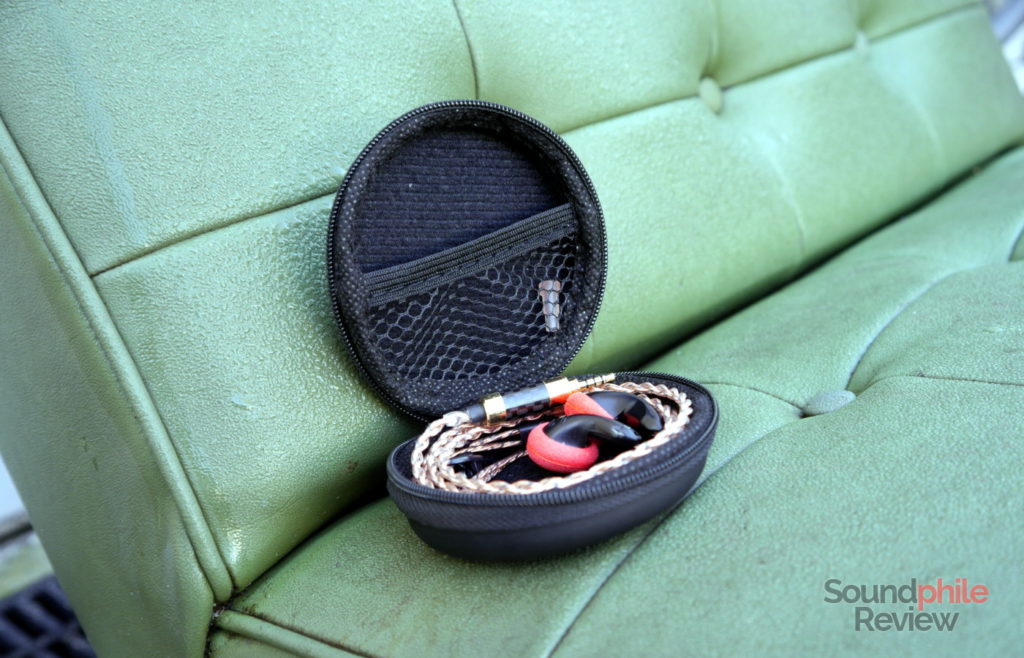 Linsoul opted for a standard shell for their earbuds: they chose an off-the-shelf component, the typical Yuin shells, and then tuned the earbuds accordingly. This means the Linsoul BLD are similar in their design to many other earbuds out there, including examples such as the Shozy Stardust. These shells have the classic earbuds style with a large head and a strain relief coming out of it, but this strain relief is shaped as to adapt to the pinnae: it is narrower in the middle, so it can fit in the cartilage gap that’s below the ear canal opening.

The plastic is matte black and it appears strong and durable – though I attribute a large part of this sensation to the fact that it is matte and well-refined. The earbuds are well-built, considering the price, and they seem to have everything that’s needed including a chin slider.

Earbuds are open and therefore offer no isolation whatsoever, and that’s true in this case, too. Even using the red foams you see in the pictures, there is no isolation at all, although using the foams makes bass a bit more prominent (so that’s something I recommend doing).

Many people find earbuds more comfortable than in-ear headphones, but they also find the large size of earbuds something that they have to put up with. The Linsoul BLD are small and the shape of the shells makes them suitable for people with small ears, too (they fit perfect in the ears of my girlfriend, who has rather small ears!). Using the foams makes me feel like the earbuds are not even in my ears, so I can wear them for a considerable amount of time.

The cable is well-made, although thin; it is made of four braided cores (that are divided in two groups of two after the Y-split) in natural copper red with black strips. Each core seems to be individually sleeved in plastic that is soft enough, although it retains a bit of stiffness. Despite this, microphonics is kept to a minimum.

As usual, I tried to use a wide array of sources to find out possible differences between them (and, as usual, I did not find any significant deviation). The sources I used were the Audirect Beam, xDuoo X3-II, Cayin N5ii and RHA Dacamp L1. I also used an iFi IEMatch2.5 (with an adapter from 2.5 mm to 3.5 mm jack) with the latter.

With 150 Ω impedance, the Linsoul BLD is not really suitable for use with portable devices, despite its high sensitivity. While you get enough volume from most portable amplifiers, only the most powerful will be able to drive them correctly and make them sound right.

The Linsoul BLD truly has an odd tuning: while most headphones tend to be V-shaped, U-shaped, (more or less) linear or variations of these three categories, the BLD are A-shaped. This is because bass is recessed, midrange is emphasised and treble is recessed. It is the opposite of the V shape, and it leads to odd effects. Only raising the volume to high levels makes the sound more even and balanced, making bass clearly audible, but the emphasis on midrange makes this especially uncomfortable and is therefore not something that is recommended.

Technicalities are not BLD’s bread and butter, but the earbuds come out as more than decent anyway. In fact the sound is presented as open and on a decently wide front, with each instrument being decently easy to hear. The soundstage is large due to the open nature of the earbuds, but it is limited in lateral extension and very limited in depth when compared to other earbuds – so it is not much larger than IEMs with large soundstage. Imaging lies in the average zone, with instruments that are rarely placed throughout the whole stage and are more often distributed either in the centre or at the extremes. Instrument separation, on the other hand, is very good as the BLD presents every instrument in a way that allows one to listen to it without it being covered by the other instruments – though this is less true with especially crowded recordings.

The Linsoul BLD are not earbuds for those looking for deep, physical bass… because bass is a bit lacking anyway. In fact bass is very limited irrespective of the frequency taken into consideration: not only is sub-bass absent, but even mid-bass is reduced. As a consequence, the sound as a whole appears to be lacking body and depth. This is always notable, as tracks appear like they’re missing something – and that something is in fact bass. Even bass-light tracks clearly show this absence. Let’s take one of my favourite albums, Culcha Vulcha by Snarky Puppy: it is clear that bass is not sufficient as the entire low-end is largely relegated to the background, leaving bass guitars and piano largely in the background, when they should be almost in the spotlight in normal conditions – after all, they’re the instruments which give the tracks their rhythmic base! If we go beyond this issue with quantity, quality is actually not that bad: thanks to the large diaphragm, the Linsoul BLD can deliver a bit of that physical feeling on impact. It’s very limited, given the low presence, but it’s there. Control is sufficient, as I can’t hear any flabbiness that would lead to leaking over the mids or otherwise mash-up of notes.

Midrange is incredibly prominent, given the limited presence of bass, and it is skewed towards the upper range. There is in fact much more emphasis on the upper region than on the lower one, resulting in a bright presentation that is sometimes fatiguing and even downright annoying, if there are many instruments that stand in that area. That’s the case when listening to the aforementioned album by Snarky Puppy that’s full of brass instruments, but that’s also true for any track that has high-pitched instruments – even tracks such as Porcupine Tree’s Trains with its acoustic guitars. It becomes tiring real soon: I think the right word is piercing, although it is usually used to describe sounds in the treble area. There’s a dire unbalance that makes it impossible to relax and enjoy the sound as it is. In terms of quality, though, midrange is not bad at all: it is fast and controlled, so that drums and other percussive or plucked instruments sound convincingly immediate, and there is also a very good amount of detail that lend the midrange depth and immersivity. It is easy to focus on an instruments and listen to its details, which is quite a good thing!

The highest part of the spectrum is perhaps the most overlooked: treble is recessed and barely audible after the initial presence caused by the continuity after the spike in the upper midrange. Treble is in fact comparable to a straight line that goes from the top to the bottom rapidly, highlighting a very fast roll-off that does not leave much air. This lack of balance and extension creates an odd situation where treble has large presence in the lower range, but it then quickly evaporates – and this strips it of detail and presence. Details are in fact present and they would be really good, were it not for the fact that it is really difficult to perceive them!

As a conclusive note, I tried to use equalisation to adjust the quantity of bass, but the results are terrible: not only there is no added bass presence, but the mids become significantly muddier and softer. Even using the RHA Dacamp L1’s built-in equaliser I could only get bass up a bit, but still not in a way that would result in it being on par with other earbuds on the market.

Finding music genres that may sound best with the Linsoul BLD is difficult: their tuning makes it a daunting task!

Here’s a quick comparison with other earbuds:

The Linsoul BLD would be great earbuds if they didn’t require sky-high volume to sound right. This is their main flaw, as they are quite capable in all other respects: they provide lots of details and have enough technical ability to be attractive for the average audiophile. Alas the way they are makes them hard to like, except for a few specific cases where their weird tuning makes them actually good. Those cases are few and far between, though, so they are an exception rather than a rule.

Buying headphones for exceptions seems not recommendable. There may be some of you that may like the BLD, either because you like their tuning or because you tend to listen at high volume making the sound more balanced. Unless you plan on using an equaliser (and find a way to make the BLD sound good), I would not really recommend these earbuds despite their good technical ability.