“What? Gaming headphones on an audiophile blog?” That’s probably what you just thought. Yep: I’m reviewing gaming headphones. Plantronics’ Italian press office offered me to try them and I told myself, “why not?”. I never tried “serious” gaming headphones before, so I was curious to find out what they were like. Given my previous experience with Plantronics products, I had high expectations and they were more or less satisfied. Well, less, actually. But the Plantronics RIG 500 PRO are not as bad as many gaming headphones out there, though they’re not great either. They’re good if you want to play some games and have fun while at it, of course.

Disclaimer: this is a loan unit I received from Plantronics’ Italian press office. 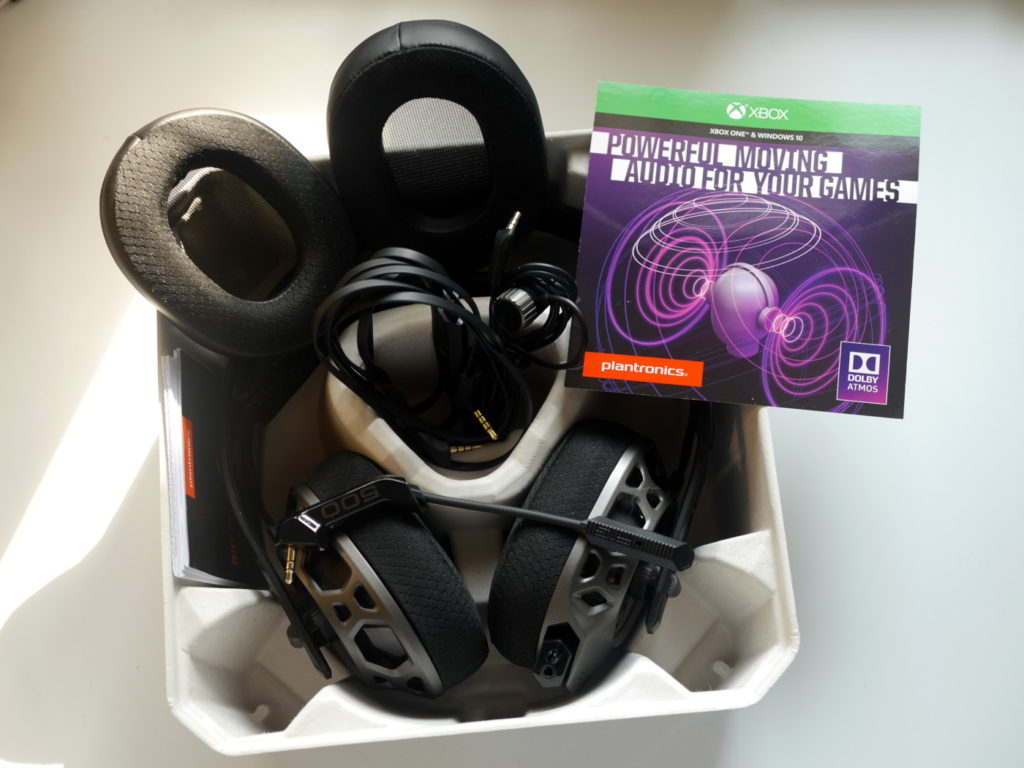 The packaging for the Plantronics RIG 500 PRO is simple and utilitarian: there is a cardboard box which contains another (raw) cardboard box which contains a few plastic bags which wrap the headphones and accessories. It took more to write it than to unbox everything. The box holds the headphones, the microphone, a cable for PC users and a cable for console users (specifically designed to fit on controllers) and an additional set of earpads.

There are also a few leaflets and there’s a plastic-covered sheet that holds the code to activate the Dolby Atmos software on a Windows PC or Xbox console. More on that in the software section. 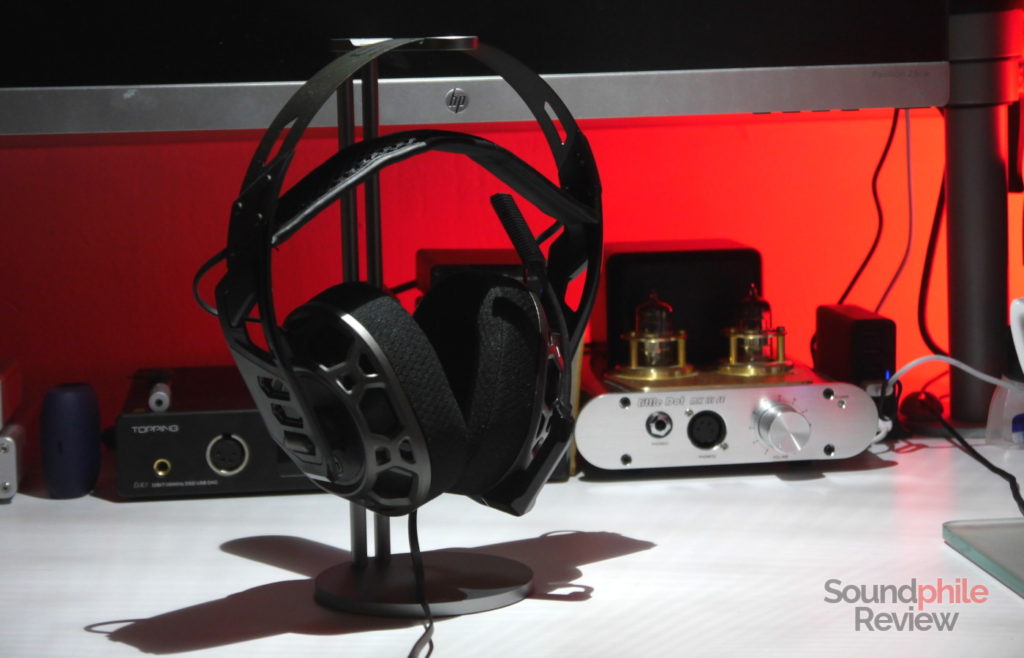 Gaming headphones are usually plagued by flashy (and almost gaudy) looks, but the Plantronics RIG 500 PRO actually are fairly normal. Yes, they’re a bit aggressive and futuristic in their looks, but there is no sign of flashy colours, bright LEDs and other similar features. They’re fairly simple. 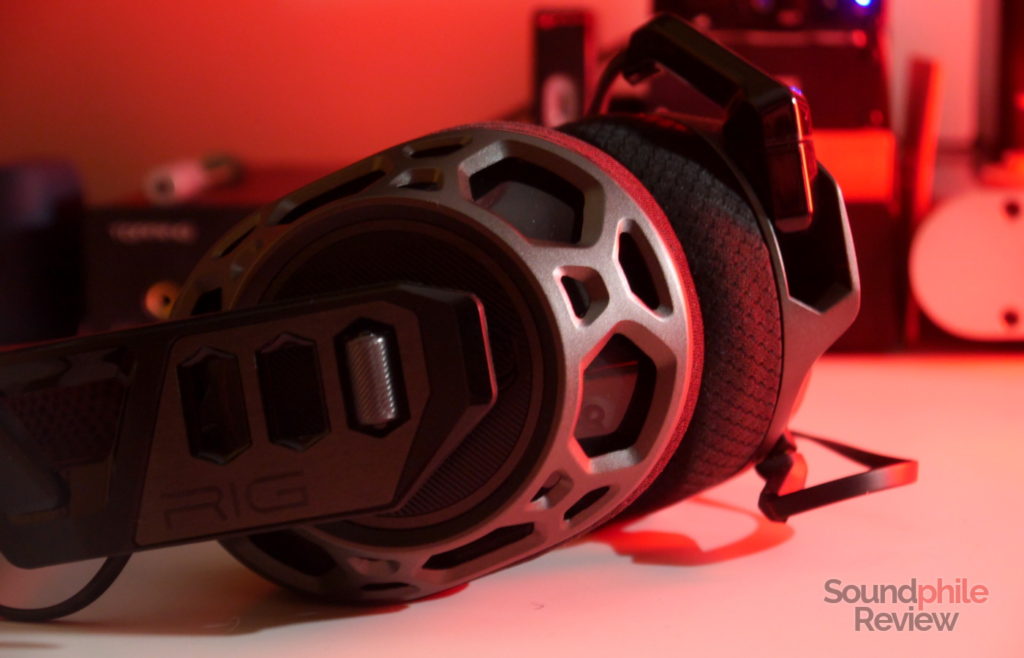 The earcups have two layers: an external one made of steel and full of geometric holes, and an internal one made of shiny black plastic. The right one also hosts the microphone boon. They’re fairly light and small – they are large enough to contain the ears, but not comically large.

Build quality is decent and pretty much in line with expectations for a product in this price range and market segment. These aren’t tanks, but they should last for a few years of normal usage. Plantronics made both the cable and the earpads replaceable, so this is a fairly positive thing. One set of earpads is made of tissue, while the other only uses tissue for the parts that push against your head and use faux leather for the rest. 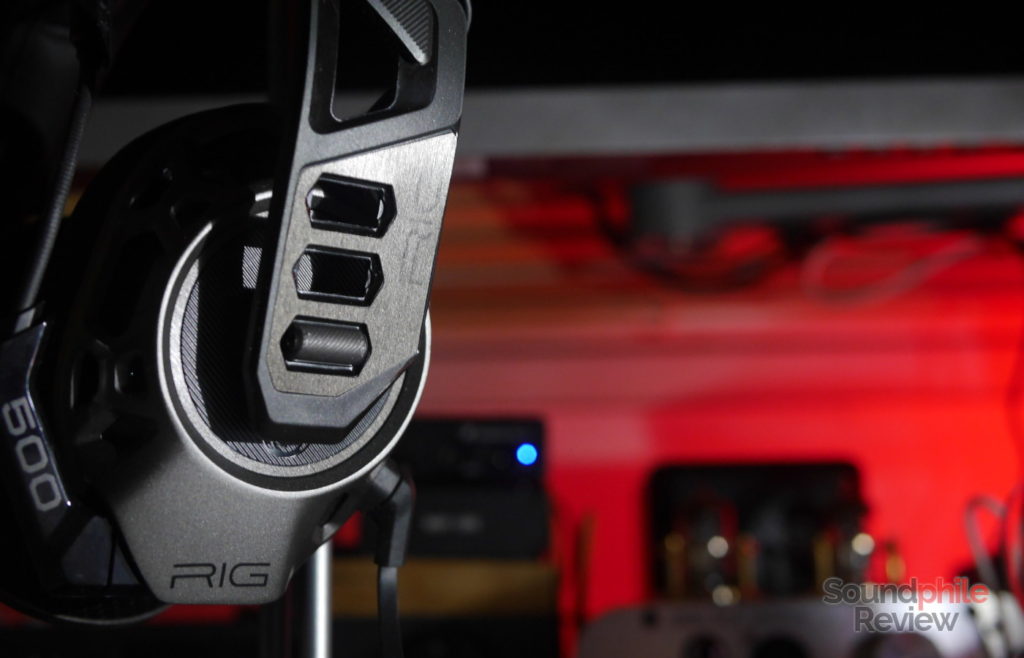 I usually prefer suspended headband designs because they’re often much more comfortable than traditional headbands. That’s not true with the Plantronics RIG 500 PRO. The company chose (inexplicably) to design the headband so that the bottom has a net-like cover and the top has a padded leatherette coat, with a plastic “skeleton” that gives it shape. The top is therefore far more comfortable than the bottom! Though it is not designed to do so, it is possible to reverse the headband and get a bit of added comfort at the price of a slightly odd shape of the headband when it is not in use. Comfort is compromised anyway, as padding is not enough, but at least it’s better than before. 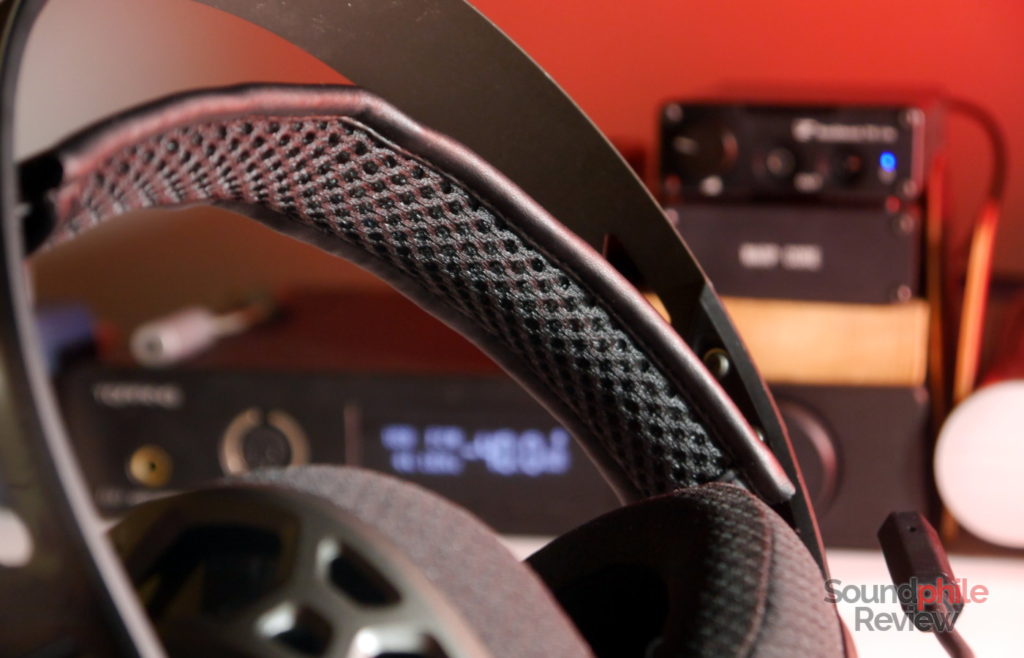 As gaming headphones, the Plantronics RIG 500 PRO should offer good isolation. In reality, the earcups do not press enough against the head in the lower part and leave me with a strange sense of openness – they don’t adhere to the head correctly, leaving enough room for sound to leak in. Moreover, the earcups padding is stiff and creaky (no, really, it creaks a lot), so not really what I would expect from gaming headphones that should guarantee hours upon hours of uninterrupted usage without causing discomfort. 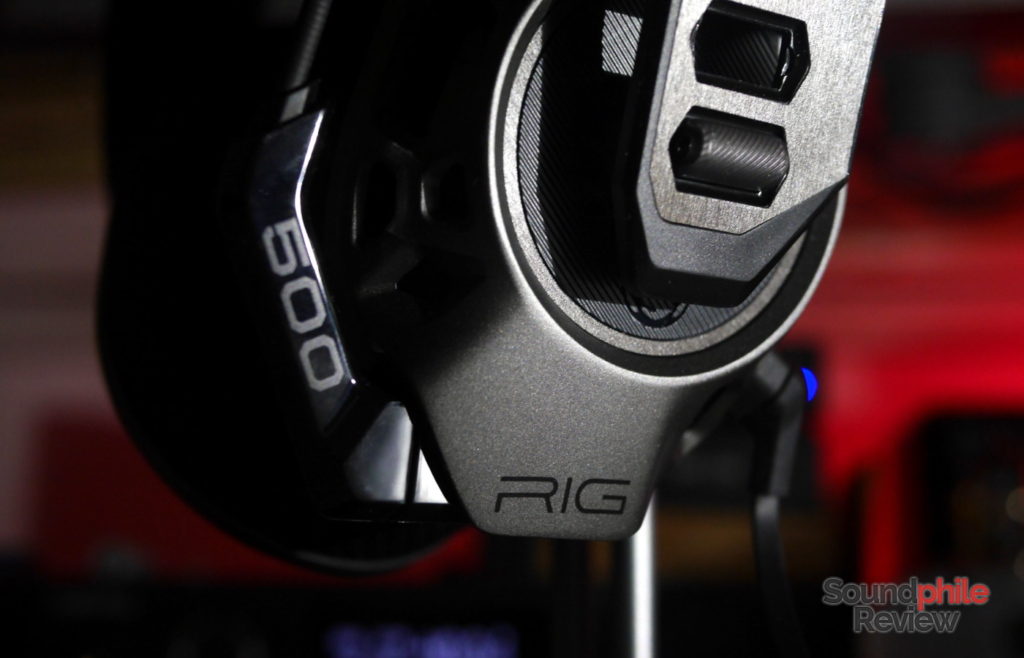 The cable is acceptable but that’s it; what leaves me wondering is that the PC cable has a single TRRS jack when most PCs have two separate jacks for microphone and headphones, and there’s no adapter included in the box. So if you have a desktop PC like me, you have to buy an adapter. Definitely not the best start… The cable has a remote which you can use to adjust volume thanks to a slider, but that’s about it. The remote is quite large and a bit heavy – execution could be better, though the idea is good. The console cable, on the other hand, seems pretty reasonable as it has a dial to adjust volume right from the controller.

The Plantronics RIG 500 PRO comes with a license for the Dolby Atmos software you can download from the Microsoft Store on both PC and the Xbox One. This software enables the feature of the same name in the “spatial audio” menu on Windows (and presumably on the Xbox, though I do not own one so I can’t directly confirm this).

It is easy to set things up: just install the software, run it, select headphones as your default setting, select the appropriate entry from the volume menu (by right-clicking on the volume control icon in the systray) and you’re ready to go. This part is easy and is a breeze.

The Dolby Atmos software enables some software processing that promises to make audio much more involving and spatially defined, so that you actually feel like you’re in the centre of the action and actually have spatial clues as to where sound comes from. That sounds like the Holy Grail of audio, right?

Well, reality is a bit different. There are in fact differences when enabling the spatial audio processing, but it is not a night-and-day change. Using real multi-driver headphones with true 5.1 surround sound yields in fact better results – the old Zalman ZM-RS6F I own is way better in providing immersion and spatial clues as it can produce real front and back sounds. No technique is perfect, of course, and the Zalmans have issues of their own, but this software fiddling is more of a gimmick than a real solution, especially with headphones such as the Plantronics RIG 500 PRO that come with a painfully narrow soundstage and poor imaging.

Given the presence of a microphone, I used my motherboard’s integrated sound card. The ASUS ROG Crosshair VI Hero I use has a “ROG SupremeFX” audio card that uses an ESS Sabre ES9023P DAC, but an unknown amplifier.

The sound signature heavily emphasises mid bass and has a weak treble response, with somewhat recessed mids. Sub-bass is very weak. Now, though I won’t delve into detail as usual, I would like to point out that paying attention to these details in sound is essential to get a good gaming experience. Headphones that are good for music are good for gaming, but most gaming headphones are not good neither for music nor are for gaming. Please let me elaborate on that.

There’s no such a thing as “gaming headphones” in terms of frequency response. Gaming headphones rely on aesthetics and the inclusion of a microphone to appeal to the public, but they often get sound totally wrong with a frequency response that privileges mid-bass in spite of everything else. That may be good for explosions and rifles firing, but not much more than that. Voices, steps, echoes and so on all belong to the midrange – which is often the weakest point of these headphones despite carrying the most important information. And that is exactly the issue with the Plantronics RIG 500 PRO: they aren’t neutral enough to let the gamer have clear enough information of the whole audible spectrum. Practical example: footsteps in Overwatch. You can barely hear them, no matter how much you raise the volume, so you don’t have much advantage in using the RIG 500 PRO or Dolby Atmos – and that all boils down to the sound signature not having enough balance and leaving midrange in the background.

On top of this, there are other issues. The Plantronics RIG 500 PRO, as I wrote previously, do not have a large enough soundstage to be useful in gaming, nor have they good imaging. The point is that no amount of processing can correct flaws in the headphones – so if they have a small soundstage, you will be stuck with that. So we get back to the problem I mentioned in the software section: there’s not that much of a difference when enabling spatial audio. And that’s because there’s not much spatiality in the headphones to start with.

Plantronics decided they would follow the tide and go with a midbass-heavy signature, so this mediocre result is the product of that decision. You’re better off buying serious headphones and a separate microphone if you really want to elevate your gaming experience.

Of course, being these gaming headphones they place a good bet on their microphone. This is an area where Plantronics did well, as the microphone is able to pick up the voice clearly and without much interference from the surroundings. Noise cancelling works decently, but it can’t do much with really noisy situations. All in all this is a positive area.

I did not have an opinion on gaming headphones before, but I do now. Do yourself a favour and buy something that sounds well, and stay away from software gimmicks – unless you have really good headphones to begin with. The Plantronics RIG 500 PRO are not bad, but they’re not good either. At $89, you would be definitely in a better position buying a Superlux HD668B and couple it with a ModMic than buying a product that tries (and fails) to correct its acoustic flaws with software. They may be better than the average gaming headphones, which are often really terrible, but they’re not good enough anyway in my opinion. I admit they have their merits, though, and they can be an acceptable compromise if you just want well-built headphones to have fun with when you play games – just don’t expect them to revolutionise the way you play, because they won’t.