Every once in a while a company launches a set of earphones that just looks gorgeous. The IKKO OH1S Gems has a very apt name, as they rally do resemble some ornate piece of jewellery thanks to their use of metal and transparent plastic in their build. They offer IKKO’s house sound, which is quite coloured but also balanced enough in this incarnation to be enjoyable with a wide range of music genres.

Disclaimer: IKKO sent me a free unit to write this review. There’s additional info on the official shop, where the OH01S retail for $199.

The packaging of the OH1S is literally a set of Chinese boxes: there’s an outer box/sleeve which contains a second box/sleeve, which in turn contains a third box, this time made with textured heavy cardboard. IKKO surely wanted you to have quite the unboxing experience! Inside the box are the earphones with their cable, a faux leather case and various set of eartips: there’s four pairs of traditional silicone tips, two pairs of larger, not-really-in-ear silicone tips and three pairs of “I-Planet” foam tips, which are large and flattened. All in all it’s a very decent set of accessories, which also includes IKKO’s signature pin. 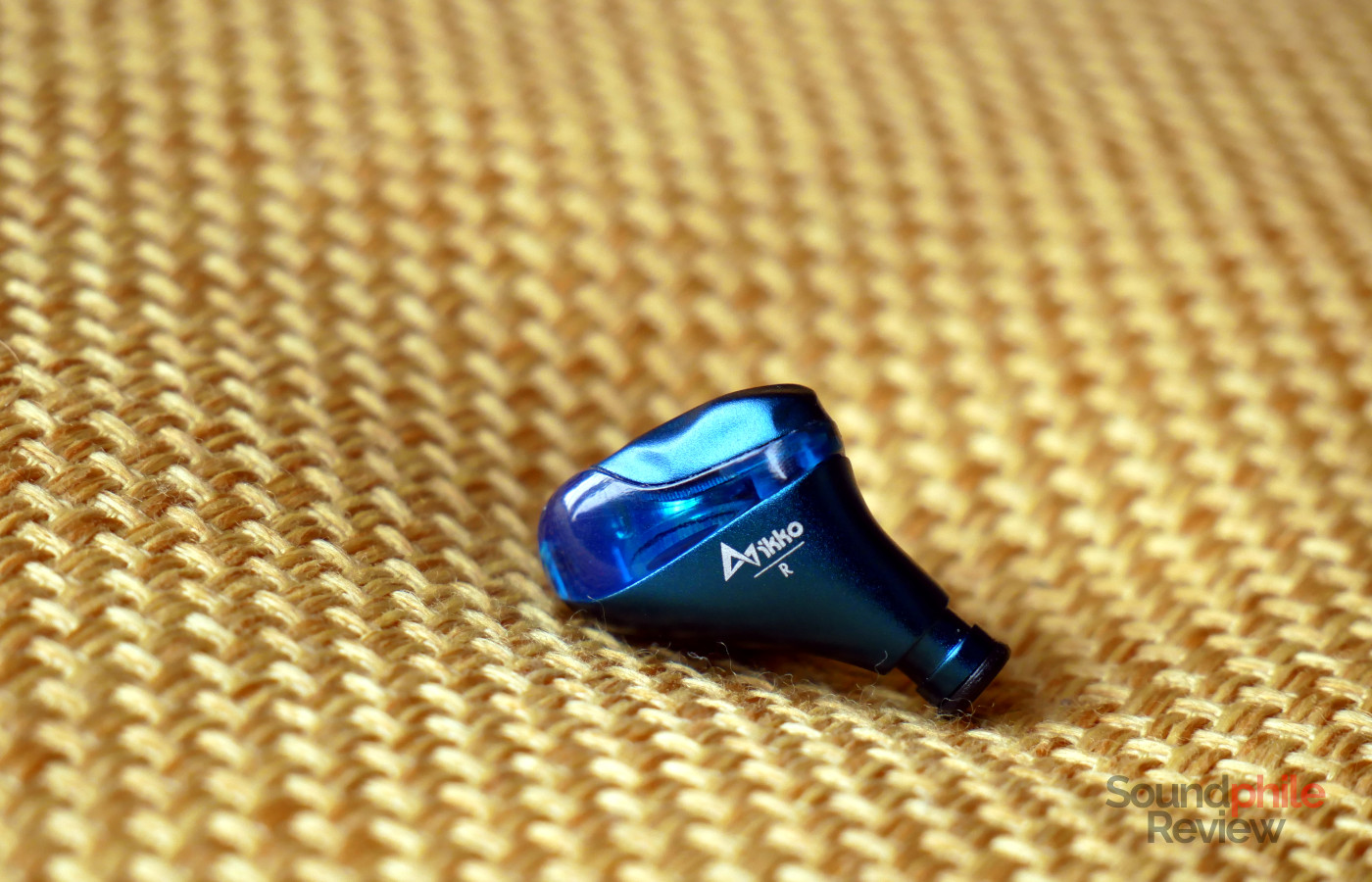 IKKO thought of a very apt name of these earphones. The OH1S Gems really do look like a piece of jewellery, as they combine the shinyness of the metal with the transparency of the plastic in a sandwich-like configuration that really stands out from the mass. The faceplate has hammered metal looks similar to the OH10, which I deem quite great. The plastic is transparent and shows just enough of the inside to make things interesting, while also adding a bit of bling to it. The main advantage from the use of plastic is that the OH1S are actually much lighter than the OH10, which helps making them more comfortable. 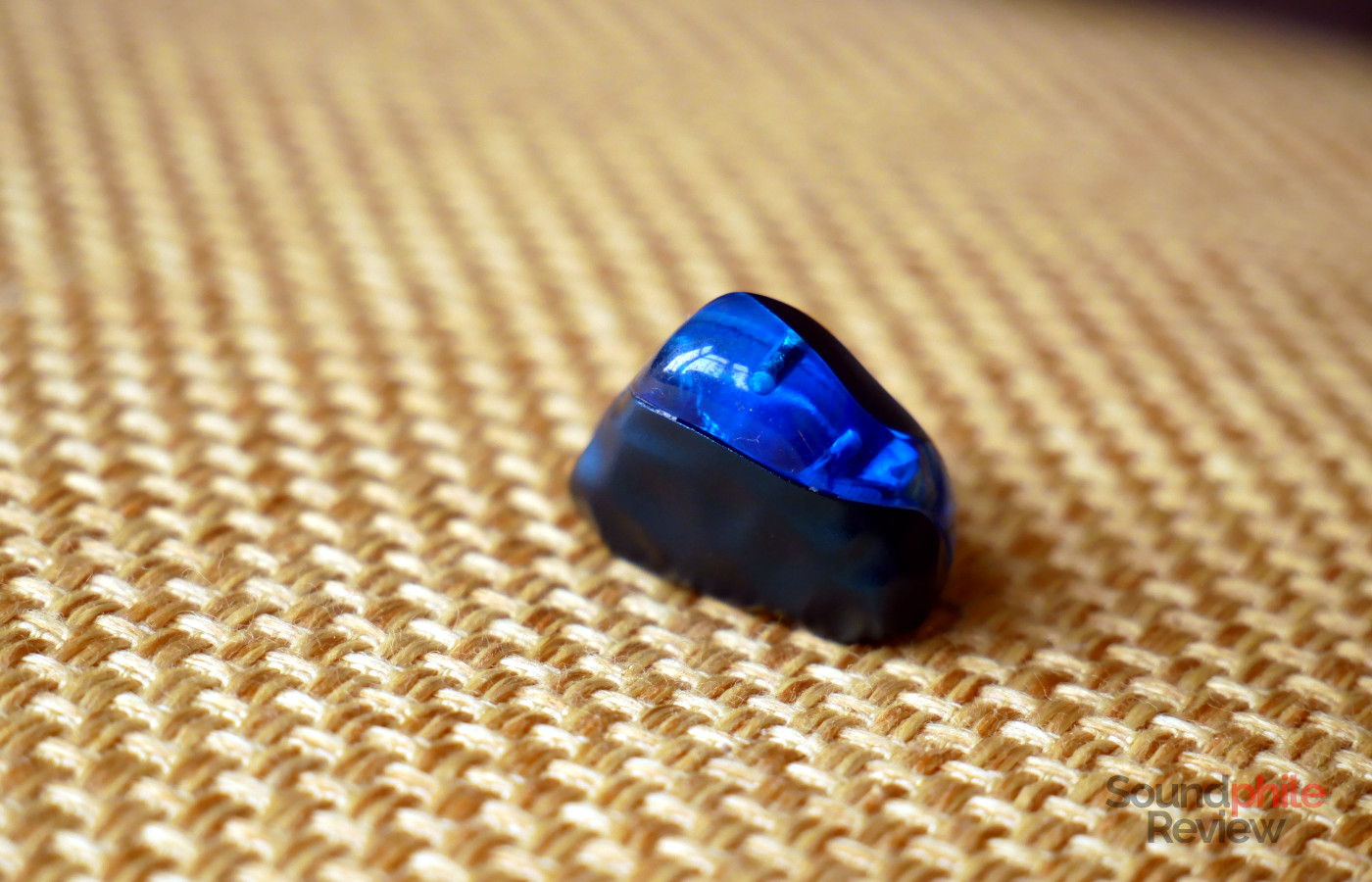 The IKKO OH1S are beautifully put together, although you can see some imperfections due to the transparency of the plastic. Overall, though, they feel quite solid. 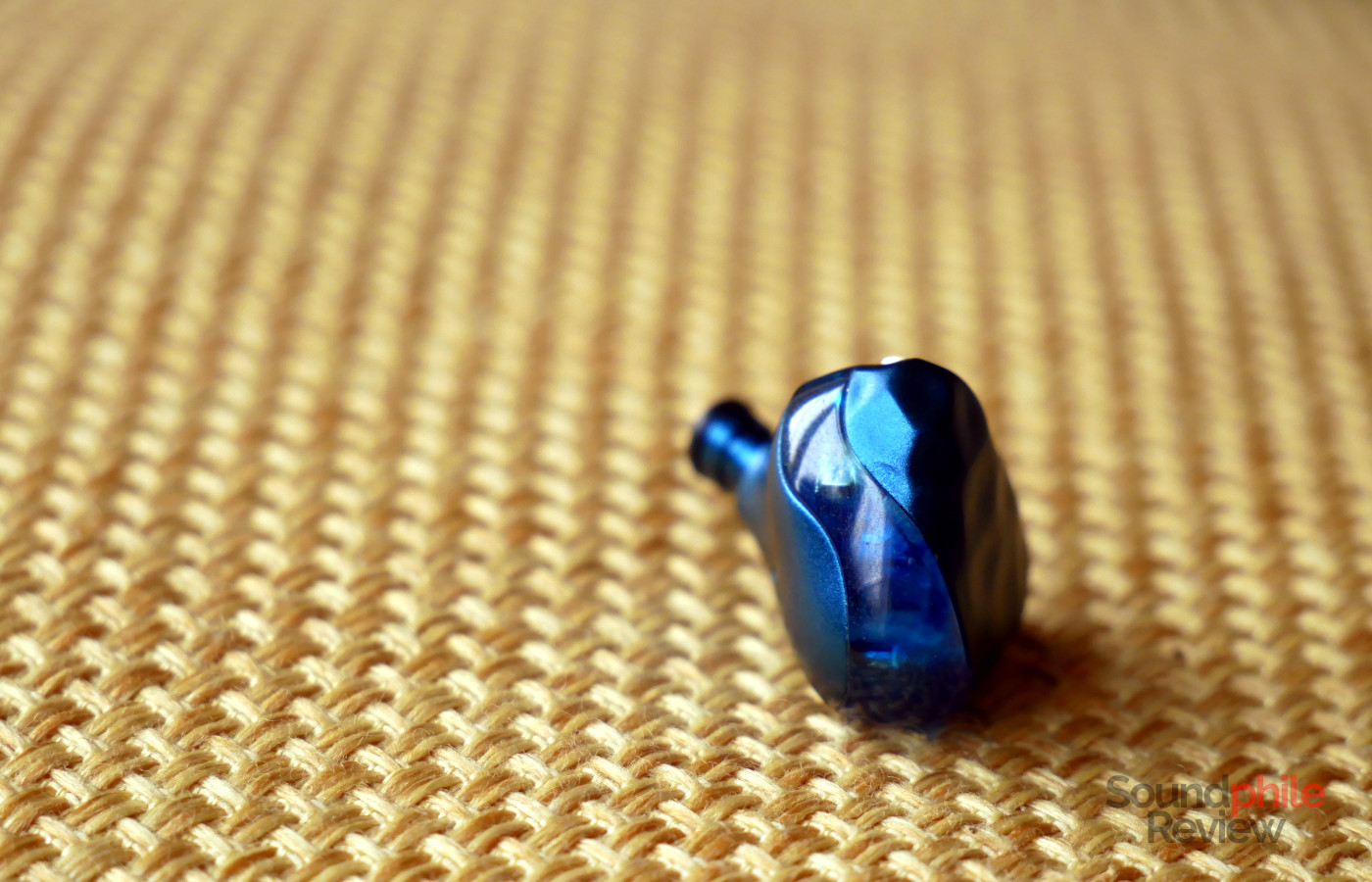 They’re also quite small, which (should) make them comfortable even to people who have smaller ears. They surely are comfortable to me: I can wear them for a couple of hours without feeling any discomfort or fatigue. I found the foam tips especially comfortable, while the XXL silicone ones were not as comfortable and I found them to influence the sound signature too much, as they made bass basically disappear. As IKKO correctly notes in the manual, though, everyone has different needs so there are probably people who will find them good.

Isolation is surprisingly decent, especially when wearing the foam tips. Although they don’t shield you completely from noise and you still have to raise the volume if you use them in a noisy environment such as public transport, they offer enough isolation to let you concentrate on the music without interference in a relatively quiet environment such as a home or office. 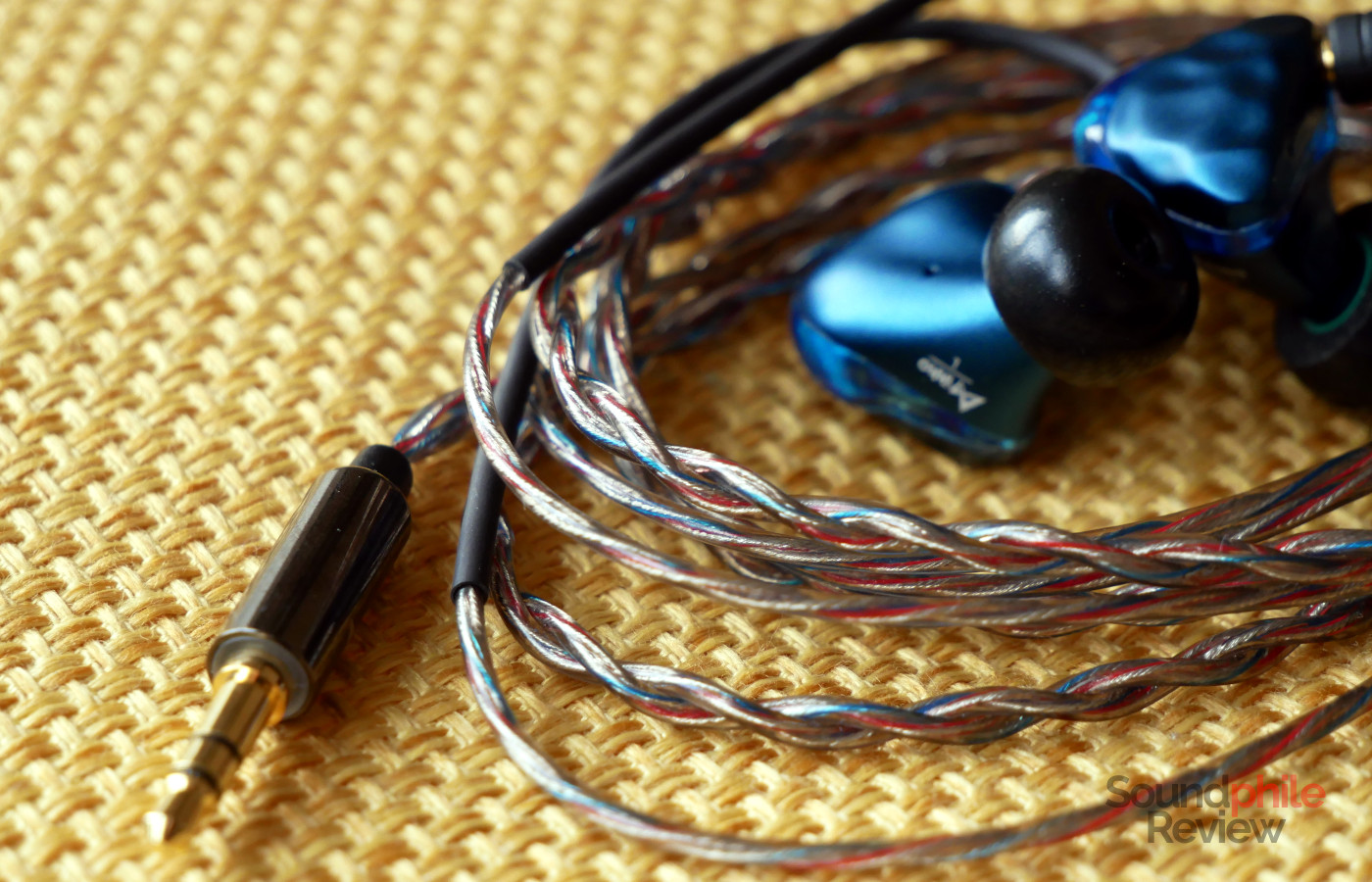 I quite like the cable, especially from an aesthetic standpoint: there is a semi-transparent plastic sleeve that covers it, but inside that it has a copper-silvery colour intertwined with blue and red and that gives it a unique look. It is made of two twisted cores, which then separate after the Y-split into two single cores, and it’s a bit stiff but generally usable. I quite like that the Y-split, the chin slider and the jack housing are all made of metal. The one thing I don’t especially like is that I couldn’t take the cable off the earphones once I put it on: it simply would not detach, however hard I tried – and believe me, I tried so hard I was afraid the earphones would break (thankfully that didn’t happen!).

I’ve tested the IKKO OH1s using both the IKKO Zerda ITM01 and a Topping DX7 driving a Drop THX AAA 789.

The IKKO OH1S Gems use two drivers: a 10 mm dynamic driver made with deposited carbon nanotubes plus a Knowles 33518 balanced armature; the former takes care of the bass and mids, while the latter reproduces the highs.

Soundstage is not really large, neither in width nor in depth, and instruments sound really close to the listener; I don’t get the impression, common among IEMs, that they are playing inside my head, but they sound as if they were just outside of my ears which is not quite great either. Imaging is also not quite great, as the small soundstage makes it difficult to hear differences in instrument placement on the stage. Instrument separation is decent, but below average for this price range.

Bass is emphasised but, to my surprise, it is not overwhelming. It is in fact a more tame version of the OH10’s: it does hit with great strength and it does go quite low, but it never becomes preponderant. In fact I would say that IKKO has found a good enough balance that makes bass colour the sound and gives it more warmth and kick, but not become aggressive and overbearing. There’s more concentration in the mid-bass area, but there’s very good extension so you can hear the lowest notes just as well. What I really like here is the physicality, as bass does have quite a kick to it, and transients are moderately fast and with a short-enough decay that drumbeats sound convincing and involving.

Again to my surprise, the midrange is really the star of the show as it clearly takes the centre of the stage. There’s an imbalance in the midrange that makes it sound a bit honky, as you can hear in Snarky Puppy’s Ready Wednesday: the piano lacks the lower base that produces its warmth and tone, while brass instruments are vivacious but kind of muted. I think this is due to a dip in the lower region, followed by a bump in the middle and by a lower than expected rise at the border with treble. This tonal issue is quite apparent independently of the music you listen to, but it is not a major issue in that it doesn’t completely ruin the listening experience in my opinion, though it does need to be taken into account. Detail is nice, with good speed and physicality as well.

The only issue that I can find with the IKKO OH1S is that the highs are really emphasised. In a track such as Snarky Puppy’s Skate U the cymbals and tambourine are very sharp and almost aggressive, with fatigue emerging after some time, although they never become excessively harsh. This is because of at least two peaks that are present in the curve, namely around 8 kHz and 10 kHz; these peaks are clearly audible and they sound a bit sharp as they are quite sudden (as in, they grow and then descend very fast) and with a relatively large excursion. Apart from these peaks, treble sounds quite alright, with a very good amount of details and good speed – just as you’d expect with balanced armatures.

Here’s a couple of comparisons:

The IKKO OH1S take the company in a new direction, with a more neutral and balanced sound than previous earphones. Still, there are some issues that are worth mentioning regarding tuning: midrange is in fact problematic with its bump in the middle region, while treble has a couple of peaks that can be nasty and surely are fatiguing; technicalities also suffer from a few issues that make them not ideal. Still, the OH1S are good in everything else: they offer a good amount of detail throughout the spectrum, they have good physicality and a great design that results in very good comfort. They surely aren’t for everyone, but I do see them being liked by some.