Improving something bad is easy, but improving something that’s already quite good is hard – terribly hard, in fact. The plateau effect is a thing and these days you get it quite soon as you go up in the price scale. It’s even harder to significantly improve something that has an affordable price tag like the original Audirect Beam. It’s no wonder then that the Audirect Beam 2S comes as an improvement over its predecessor in most areas, but with some differences.

Disclaimer: I received this unit from Linsoul, who provided it for free in exchange for this review. They sell it for $149. Additional info is available on the manufacturer’s website.

The Audirect Beam 2S is really quite something when it comes to the unboxing experience, as I noted in the related Out of the Box article. Not that it’s anything too fancy, but the jewelcase-like appearance of the box lends it a luxurious feeling which I like quite a bit. Inside the box are a manual, a USB-C to USB-C cable, an adapter to use said cable with USB-A ports and a USB-C to Lightning cable. All cables have housings made of metal and are covered in braided fabric to protect them.

The Audirect Beam 2S is a parallelepiped that’s mostly made of aluminium, while one end is made of semi-transparent black plastic. You can actually see what’s inside, which I find especially cool. The Beam 2S is a bit stocky, as it is relatively large for a dongle DAC at 51 x 14 x 14 mm (but it’s still smaller than DACs such as the xDuoo LinK 2). On one side there are the “hilidac” logo (because, for reasons unknown to me, Audirect uses two brands at once) and a status LED. It’s quite simple and elegant. 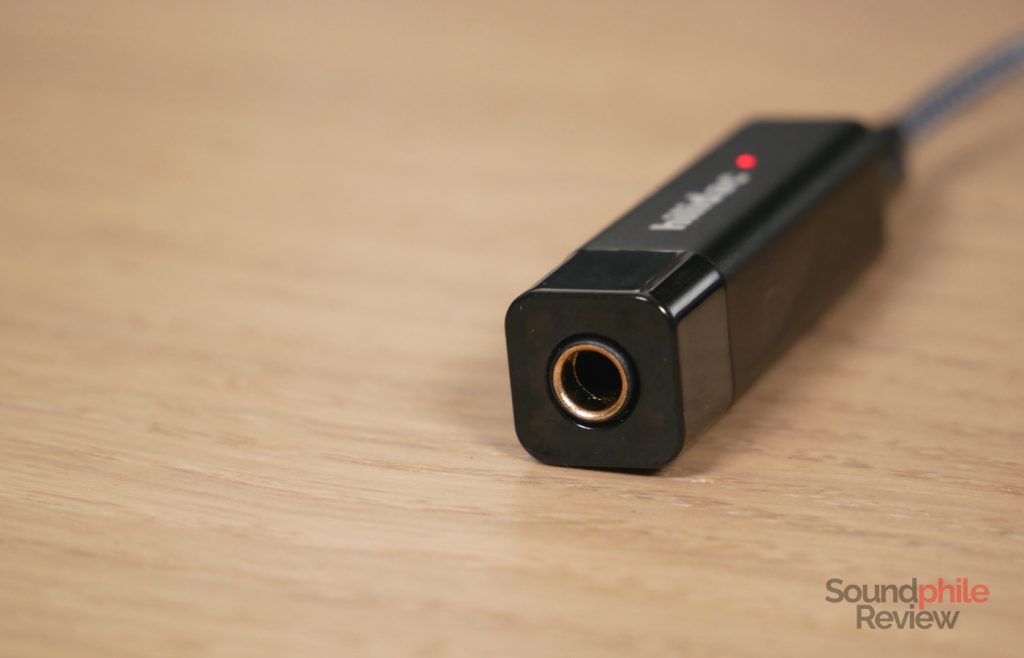 Build quality is, as far as I can tell, quite good: also thanks to its simple design, which uses a single piece of metal for the shell, it appears to be put together quite well. The plastic bit houses the 4.4 mm connector – a weird choice for a device this small, considering how large the connector is, but it seems like the 4.4 mm jack is more and more becoming the de-facto standard for small (non-XLR) balanced connectors so this isn’t too surprising. 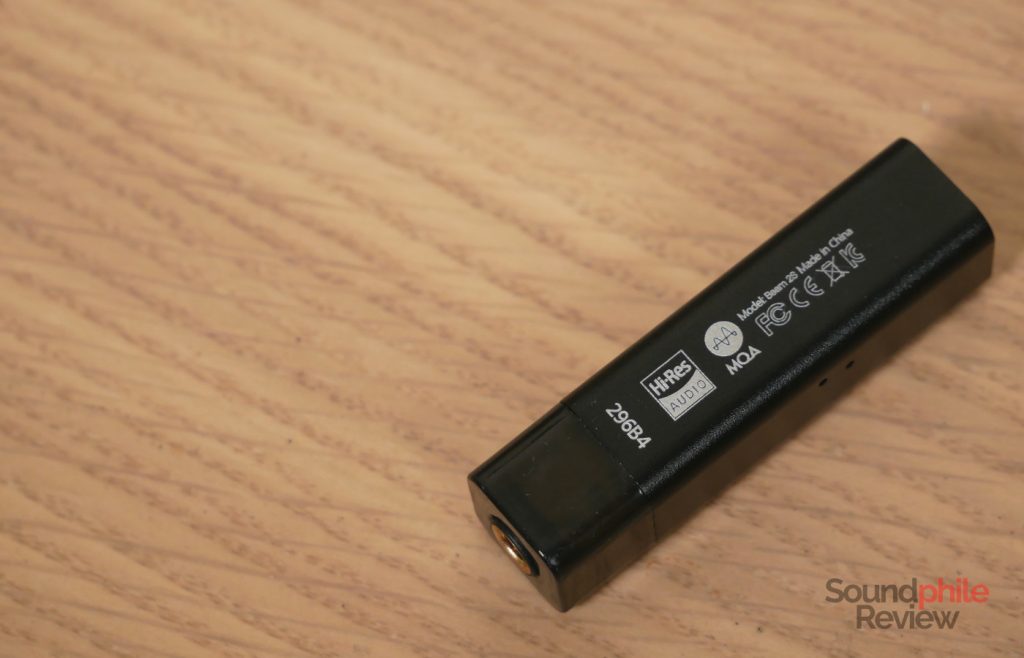 On one side there is a second status LED that indicates the current gain; besides it is a button hidden inside a hole: you will need a pin or other small device to push it. With a short press you can alternate between low, medium and high gain, while long-pressing it leads to enable “night mode” which turns off LEDs after three seconds. 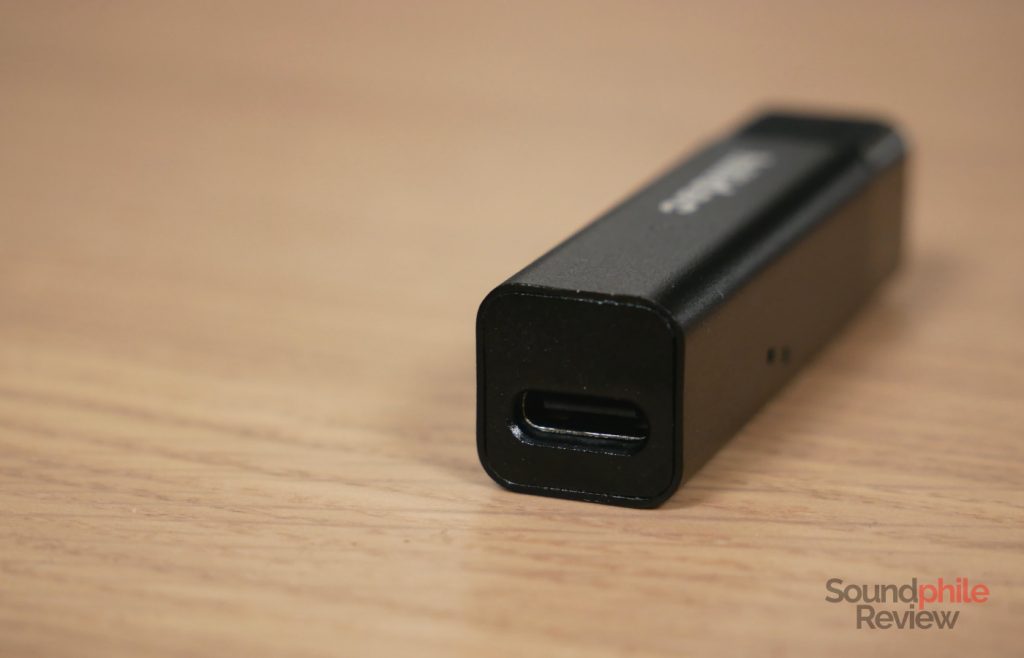 The Audirect Beam 2S doesn’t require drivers on any platform and it supports all major operating systems: Windows, macOS, Linux, iOS and Android. It is truly “plug and play” – thankfully not in the same way as the Windows 95 introduction.

With 208 mW output at 32 Ω, the Audirect Beam 2S is quite a powerhouse for its size. It can’t drive headphones with low sensitivity or very high impedance to deafening volume, but it is more than able to drive IEMs and full-size headphones with modest power requirements. The Sennheiser HD 6XX, at 300 Ω, play just fine even at relatively loud levels – no eardrum-piercing volume, though. Volume is controlled via hardware, which means that the quality won’t degrade as you adjust it using software.

At the heart of the Beam 2S is a single ESS Sabre ES9281C PRO (about which, funnily enough, I wasn’t able to find any information on ESS’s website) which uses a “quad DAC” architecture, meaning it can manage up to four channels and therefore two channels in balanced configuration. The DAC is also able to work as a MQA renderer, but it can only provide the final unfolding so it still needs a software decoder in order to work.

I always notice the presence of a bit of background noise when using the Beam 2S, especially when using low-impedance, high-sensitivity earphones. It’s relatively limited, but noticeable when music is quiet; it’s high-pitched, so you will probably notice it more if you are sensitive to treble.

In general I don’t notice any deviation from neutrality with the Beam 2S, which doesn’t seem to add anything of its own to music. It is neutral, as it should be, so you shouldn’t hear any differences in tuning when comparing it to other DACs or amps. I do hear a difference in soundstage compared to other sources, though: the much larger and much more powerful iFi Neo iDSD has a noticeably wider soundstage and a better central imaging. I also hear better detail and instrument separation there, together with better speed and dynamic range.

Overall, though, the Audirect Beam 2S is quite good given its very small size and affordable price. Although it’s not perfect from a technical standpoint, its tuning is basically flawless and makes for a great option in the portable space.

The Audirect Beam 2S offers great value to those looking for a portable DAC with a 4.4 mm balanced jack output. It has got quite a bit of power, which allows it to drive even high-impedance headphones effortlessly, and its neutral signature makes it a great pairing with practically any headphones. While you won’t be able to drive power-hungry cans such as the HiFiMAN HE-560 to their limits, it’s still quite a great option if you value extreme portability. You usually have to give up something in order to make things portable, but this seems not to be the case: the Audirect Beam 2S is a great successor to the previous Beam. Compared to it, it loses the physical controls, but that’s a minor price to pay to have over four times the power!