The unknown can be either exciting or frightening, depending on your attitude. Often the former is true, especially when trying new audio gear is involved. One thing’s for sure, though: there are usually no expectations about something you don’t know. That’s important when you review something and it was true about the Tenhz P4 Pro, which I was offered to try. They rapidly became quite exciting as soon as I got to know them, but then this excitement left its place to something else as I started knowing them better.

Disclaimer: the Tenhz P4 Pro were sent as a free sample I won’t have to return by Linsoul Audio. They sell the earphones on AliExpress and Amazon for $150. 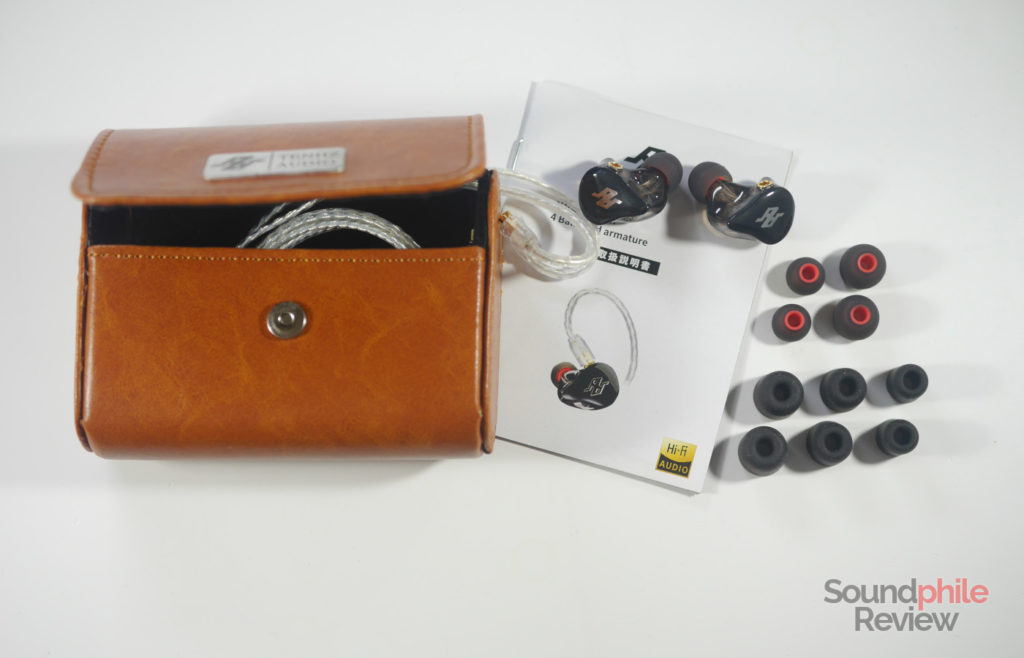 The Tenhz P4 Pro has one of the richest sets of accessories I’ve ever found in this price range: the box holds the earphones themselves, the cable, a brown leatherette case whose interior is covered in velour with an internal pouch, three pairs of foam eartips and three pairs of silicone tips.

The only (and very minor) issue I found is the case, which closes thanks to magnets; the magnet on the flap was off-centre and this prevented the case to close correctly. 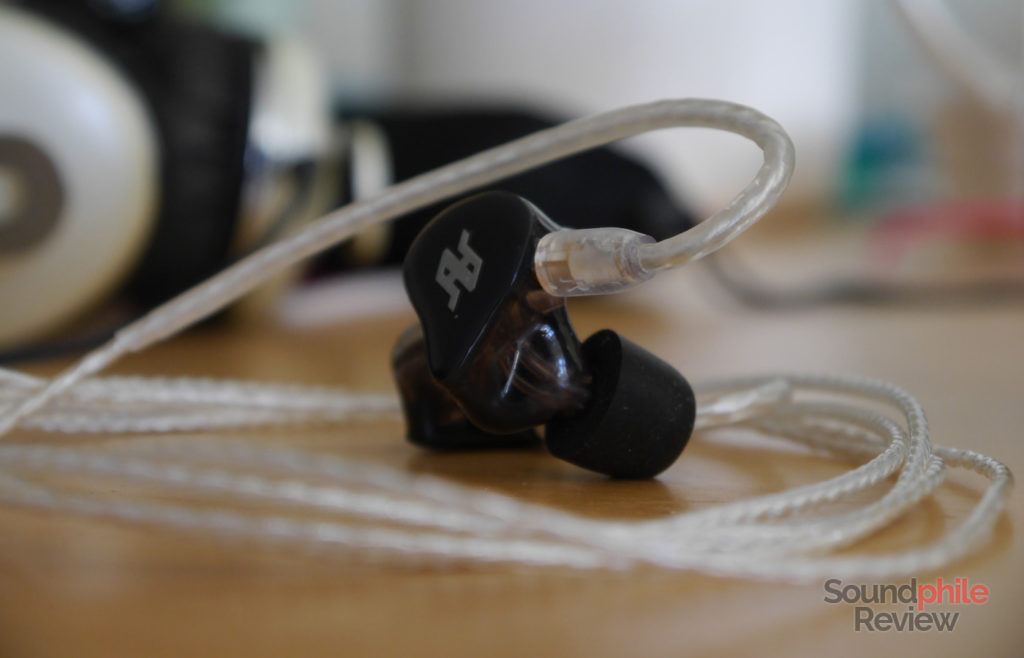 If anything, Tenhz P4 Pro’s design does not feel either innovative nor especially curated, yet it’s solid enough to be highly functional and comfortable. The black faceplate are installed on top of a transparent shell made of plastic (resin?), which encases the balanced armatures and the crossover PCB. They’re nothing new, really – in terms of shell shape they’re similar to the KZ ZSR and the TRN V10, while they’re similar to other IEMs such as the BGVP DM6 or the KZ ZSN when it comes to the shape of the faceplate. It’s not exactly new, again, but it’s well done. The company chose to make the faceplate shiny black and to put their logo (in silver) on it. 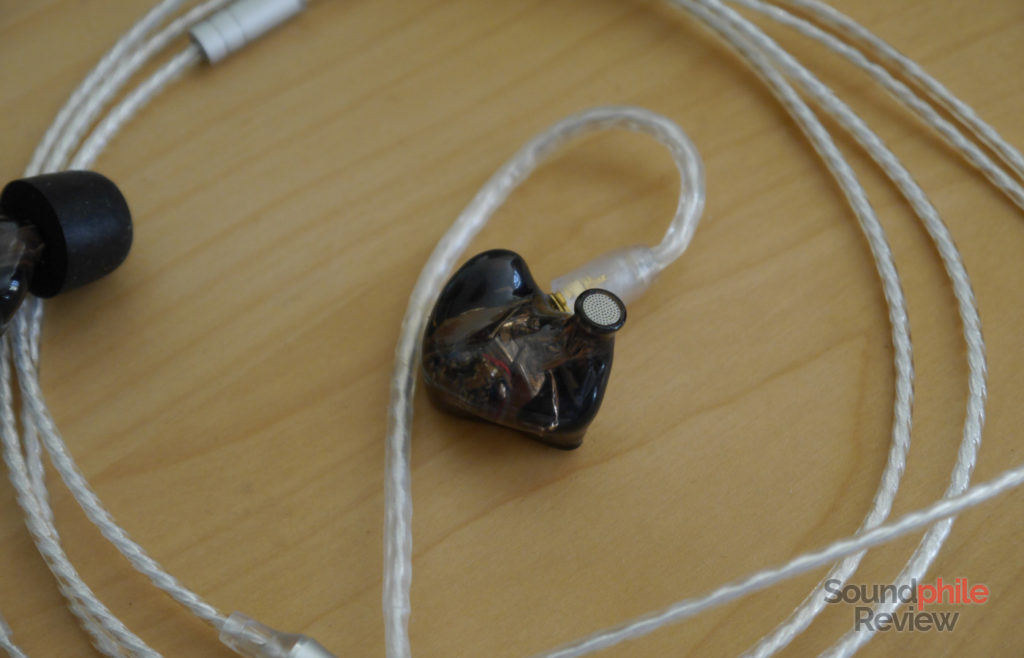 The Tenhz P4 Pro is well built and appears like a long-lasting product. The materials used do not feel cheap to the eye nor to the touch, and instead feel like they’re high quality. Surprisingly, plastic does not feel plasticky (however weird that may sound!) and has instead a solid feeling to it. As I already mentioned, the balanced armatures and other electrical components are encased in the plastic, so no repair would be possible if they failed.

The shape suggested to me it could end up either in a disaster or in a resounding success, comfort-wise, but luckily the latter is the case here (at least for me). The Tenhz P4 Pro are extremely comfortable, up to the point I barely notice they are in my ears. This applies especially when using the foam eartips, but it is also true with silicone tips. The small size of the shell also helps in this regard. Please keep in mind that this is my personal experience, though, and yours may be quite different as the shape of ears changes from person to person! 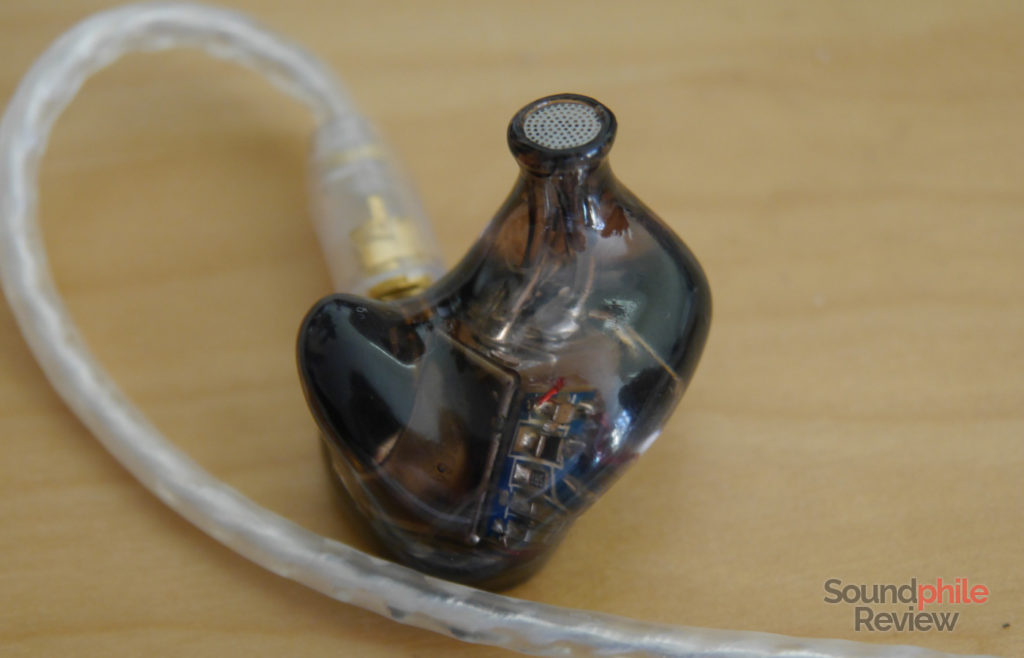 I found the Tenhz P4 Pro to be especially good when it comes to isolation: they are truly great at it, acting almost as earplugs. Just wearing them makes it difficult to hear what’s outside: a person speaking at one metre distance is difficult to understand, a train moving is barely noticeable if one listens to music at low volume. Public transport is not an issue, even with crowded subways: one can barely hear the surroundings. This very reason is why they are not recommendable when walking on the street, as one could not hear possibly dangerous events around them.

The cable is really thin and this makes it appear fragile, even though it is actually not. It probably is, however, not as resistant and durable as other cables that come weaved or braided and with thicker cores. It is made of a single core and it is roughly the same size both before and after the Y-split. On the other hand, the ear hooks are made of pre-moulded plastic that has the right shape to feel comfortable, and all the “boxes” on the cable are made of aluminium except for those hosting the MMCX connectors (they’re made of transparent plastic, which keeps the aesthetics consistent). All in all it’s not a bad cable, but it still looks and feels cheaper than cables such as Shozy x Neo CP‘s cable.

I tested the Tenhz P4 Pro with various sources, as usual: I used a xDuoo X3-II, an Audirect Beam and a Topping NX4 DSD. In all cases I used an iFi IEMatch due to the high sensitivity that led to hisses being constantly present.

The box of the Tenhz P4 Pro shows a frequency response graph that seems too good to be true – it is almost entirely linear and neutral. It does not seem, however, to be exaggerated. After listening to the earphones for a while, I can say that the graph appears (somewhat) accurate. The Tenhz P4 Pro are really neutral in their sound presentation, with the only remark to be made being that bass could use a bit more presence and depth.

There are four balanced armatures inside each earpiece, for a total of eight across both channels. They’re remarkably well tuned, with no especially noticeable peaks or dips – except for the highest part of the spectrum, which is not as linear as the rest.

Although they are not going to impress you, the Tenhz P4 Pro are good from a technical standpoint. The soundstage is decently wide and coherent, as instruments appear on a stage that goes uninterrupted from side to side, but it never goes beyond the sensation of everything happening in your ears. It also lacks depth, so instruments appear somewhat condensed and squished against a virtual wall. Imaging is quite solid, as instruments are placed on the whole soundstage and with good accuracy. Instrument separation is also very good, probably thanks to the multiple drivers and to them being good. Despite all this, music often sounds very intimate and sometimes even congested.

As I mentioned previously, bass lacks depth and presence, up to a certain extent. The Tenhz P4 Pro are earphones for those who like “neutral” bass that is often in the background and provides body to the mids, but little more. Even in those tracks where bass should be front and centre, it is just on par with the rest of the spectrum. Let’s take Aes Dana’s Borderline: bass should be pervasive and physical, but it’s almost in the background. It never comes out on top, which can be both good or bad depending on your taste. It is the weakest point in the P4 Pro’s presentation, at least when it comes to quantity. Quality is another story, as it comes out as decently fast and detailed. Due to its lack of presence it’s never easy to spot the finer details but, on the other hand, one can always hear how the various instruments are distinguishable and portrayed with a sufficient amount of details.

Midrange is the star of the show: it is always in the spotlight, sometimes appearing on top of bass even when it should not. It’s never aggressive, though, nor is it emphasised. It appears really even in its presentation, and I could never hear any significant emphasis or de-emphasis on any instrument. It also presents the listener with a decent amount of details, that are especially noticeable when percussion instruments are involved. Voices, too, are well detailed and very well represented with good tonality, either male or female ones. There’s no trace of sibilance, and “s” sounds are represented with great naturalness (I noticed this especially when listening to Daft Punk’s Touch). The midrange is definitely solid on the P4 Pro and leaves little to no room for criticism, given its great balance and good detail. Even speed is commendable, with percussion instruments that are immediate and precise.

Treble may be another weak point, in that it sometimes sounds a bit sharp and aggressive: when there are lost of cymbals they can quickly become overwhelming. I think there may be a small peak in the mid-treble region that leads to this, though I have to admit I am not too sure about that and I have no measurements to back up that claim – please take it with a pinch of salt. What I can say with good certainty, however, is that the Tenhz P4 Pro do well in terms of extension and detail. Extension is sufficiently good as to allow highs to sound “complete” and well balanced, so neither strident nor warm, but it also has to be remarked that roll-off is not slow enough to be called “gentle”; rather, it is almost sharp. It seems to me that treble lacks the necessary air, but I suspect that of being related to the relatively narrow soundstage and intimate sound presentation. Detail is the best feature of treble, as it is fine enough to let one hear all the smaller things: as an example, chimes in Within by Daft Punk are one such example.

As they’re generally neutral in their tuning, the Tenhz P4 Pro are able to reproduce a wide array of music genres. The only genres where they falter are those that require more bass and sub-bass – typically electronica, trip-hop, hip-hop, etc.

Before coming to the closing lines, here’s a small comparison with similar headphones:

The Tenhz P4 Pro are good in-ear headphones: their tuning is almost neutral, their technical ability is decent and their detail retrieval is decent. Overall, they are quite enjoyable and offer top quality isolation and comfort to the list. The thing is that they are just good: they don’t excel at anything and they have to battle with fierce competition that offers either similar features at a lower price or better features at a similar price.

While they are very good on their own, and they are in fact headphones that I can recommend to those looking for neutral IEMs, they have to confront the likes of the BGVP DMG and DM6 or the Tin Audio T2, that are just excellent at their respective price points and offer similar or better features. I can in fact recommend the Tenhz P4 Pro only if you know what you’re looking for – and that is, a neutral IEM with decent features at a relatively affordable price, but not one that will blow your socks off. That may be actually good, though: not everything has to be exceptional, fantastic or excessive to be good and enjoyable, and this is the case.