The Creative Roar line of speaker has gained lots of popularity since the very beginning: the first-gen Sound Blaster Roar has been a benchmark both in terms of sound quality and features and the Roar 2 improved on the few flaws the previous model had. The iRoar generation, launched last year, includes the full-size iRoar and the portable, water-resistant Creative iRoar Go. This is the speaker we’re going to review.

Disclaimer: I got a free sample of the Creative iRoar Go from the local press agency. You can check out Creative’s online store to buy a unit. 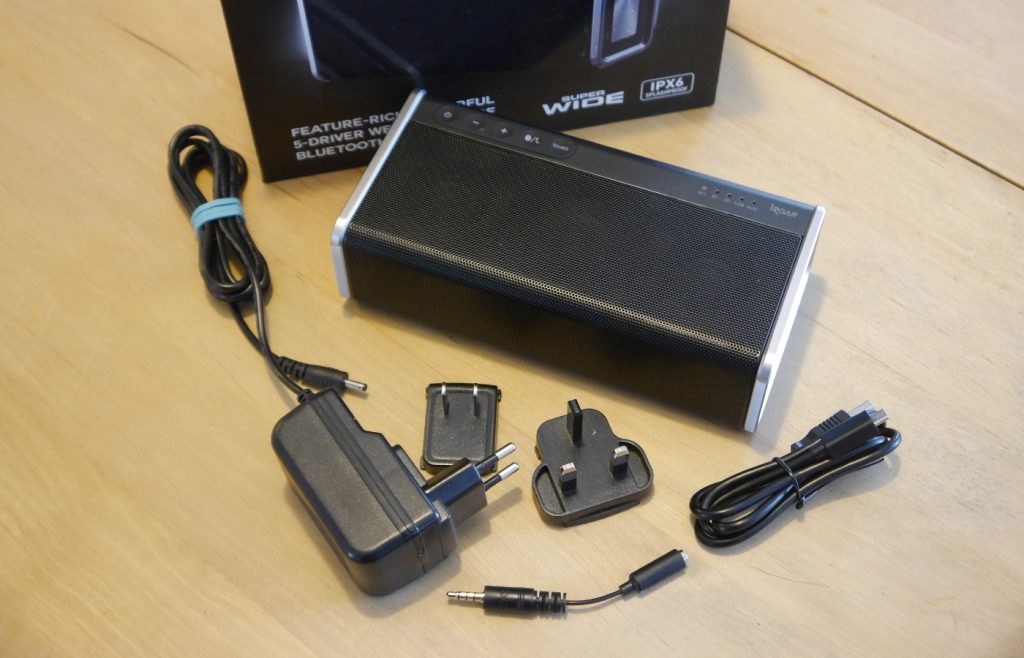 The Creative iRoar Go comes in a simple box with almost no frills: there is the speaker, the power supply (which has a proprietary connector!) with EU, UK and US plugs, a USB to micro-USB cable, a jack adapter and instruction manuals. There is no 3.5 mm jack cable as in previous generations.

Contrary to previous devices, you cannot charge the Creative iRoar using a micro-USB cable, but you need to use the included power supply. This is a major step back in my view, as I already wrote in the Bowers & Wilkins T7 review, but it seems to be part of an industry trend. I hope to see it wither away in the shortest time possible.

A side note about the power supply: the cable is ~2m long, which is enough to allow different use cases even when the speaker is being charged.

The design of the Creative iRoar Go won the Red Dot Design Award in 2016. If you expected a revolutionary design with never-before-seen lines, then you’d be disappointed: the iRoar Go largely pays homage to the previous devices in the Roar family and innovates on those designs, rather than going on an all-new route. That’s part of what makes this speaker interesting, though: it is a super-refined version of a very successful and effective design. 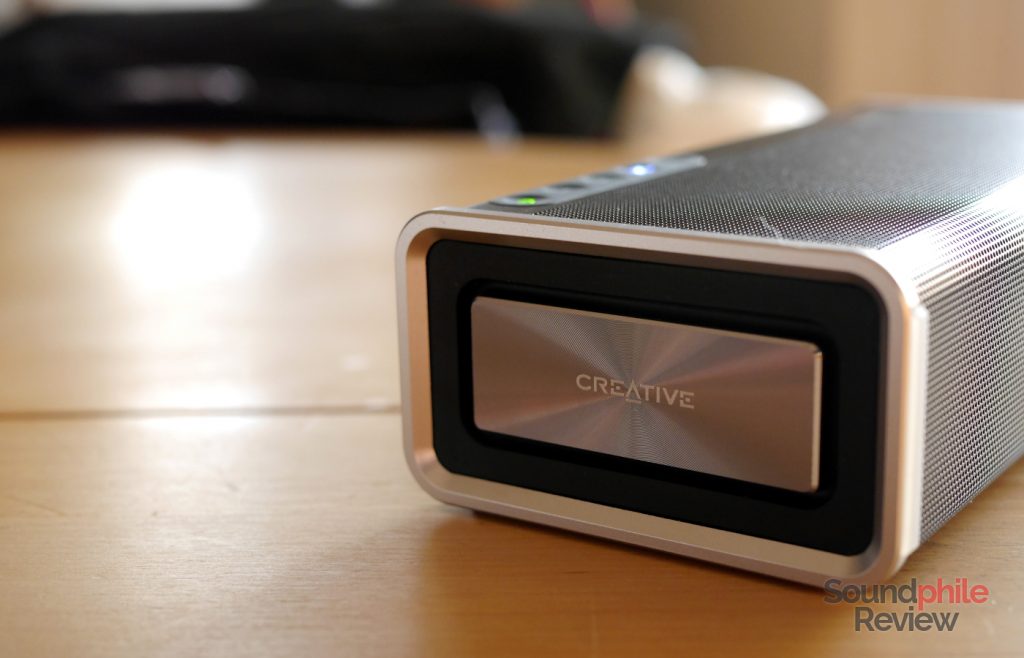 The top and front sides are covered in a metallic mesh, while the lower and back sides (and part of the top) are made of plastic. The left and right sides host the passive bass radiators, which feature aluminium plates with a concentric circles motive engraved on them. They are protected by a frame made of silver-coloured plastic. A nice touch is the addition of rubber feet on the front side of the lateral frames, because they allow the speaker to stand vertically.

Creative did not make extensive use of “premium” materials such as aluminium but this does not detract from the overall perceived quality or build quality. As for the latter, it is superb and the Creative iRoar Go is rock solid. There’s no complaint to be made here. 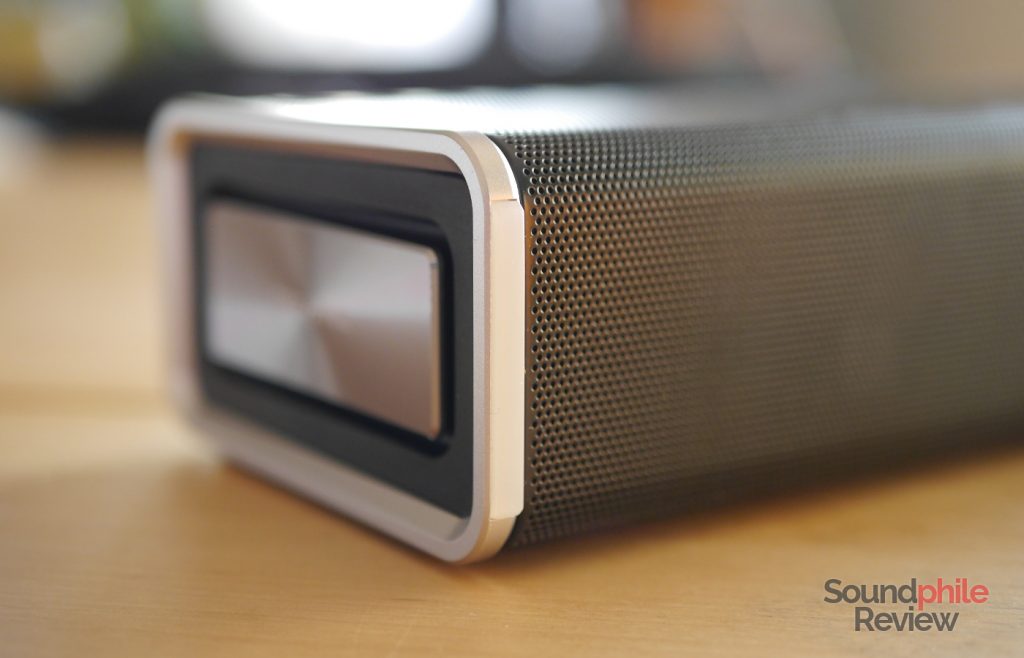 The overall appearance is that of a solid, reliable speaker which can withstand a bit of abuse – and given this is a water-resistant device, this is all too important an aspect. The buttons are all made of rubber and the connection ports are hidden under two different rubber lids to protect them from water; this fact adds to the general impression of a rugged (yet refined) device. 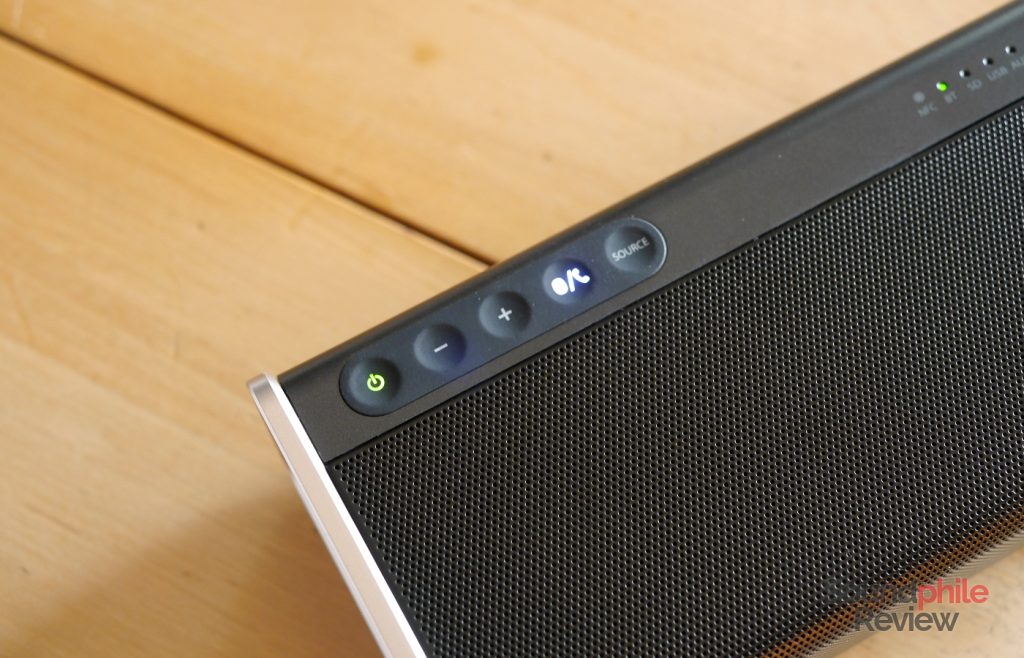 The Creative iRoar is 54 x 192 x 97 mm and weighs 810 g, which makes it one of the most portable devices in its category. The device is also water resistant thanks to IPX6 certification, which means you do not have to worry even if lots of water submerge it. In practical terms, this is a fantastic device to take under the shower or on the pool side. 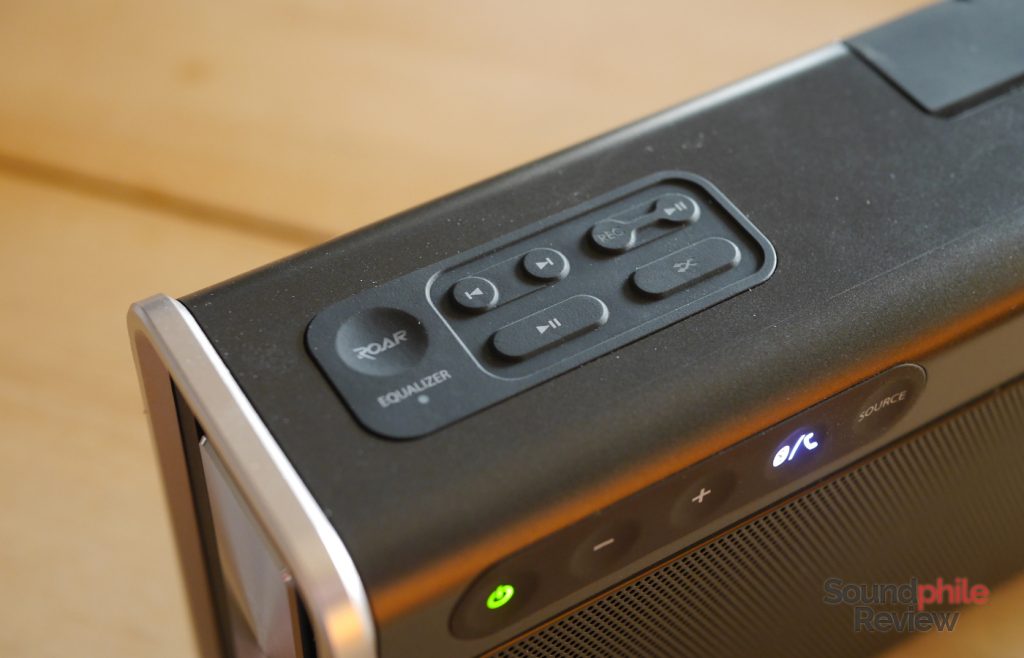 There is a number of buttons on the speaker: on the upper side there is the power button, the two volume buttons, a button to control the Bluetooth module and to answer phone calls and, finally, a “source” button to select the desired source (with accompanying LEDs on the right to indicate what source is active). On the back there is a “ROAR” button which enables the Roar mode (more on that later) and the equalizer, plus a slew of buttons to control playback and recording (play/pause, next track, previous track, shuffle mode, rec and play/pause recordings). 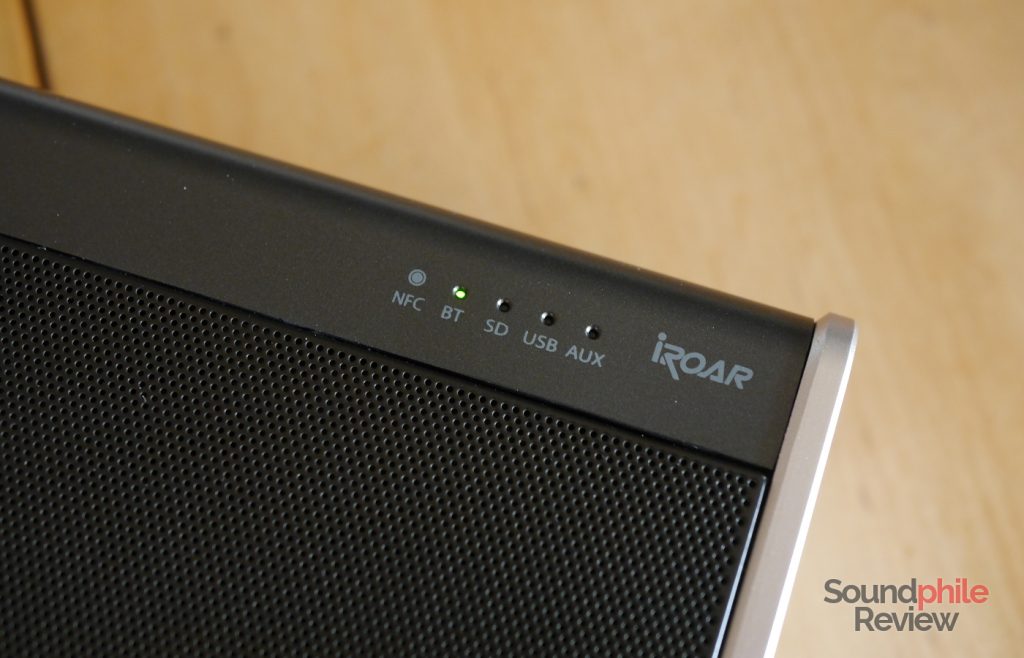 What has always struck me is the sheer amount of features Creative is able to stuff into its Roar speakers. Despite shrinking the size of the iRoar Go, Creative crammed most of the Roar 2 features into it: there’s microSD playback, a USB port to play content on thumbdrives and charge another device, a micro-USB port to connect the speaker to a PC, an integrated recorder, a speakerphone and equalizer. There’s also NFC for quick pairing.

The Creative iRoar Go comes equipped with Bluetooth 4.2 with AAC and SBC codecs, but it lacks aptX technology. This means sound quality is comparatively inferior to aptX-enabled devices. The Sound Blaster Connect app can be downloaded on both Android and iOS and it allows the user to customise their experience: not only can one control playback and sources remotely (the speaker was connected to my PC via micro-USB cable when I took these screenshots), but also change how the speaker sounds thanks to a graphical equalizer. I only have Android devices and my experience has been good; I cannot comment on the iOS app.

microSD and USB thumbdrive playback can be controlled both on the speaker itself, thanks to the buttons on the rear, and using the smartphone to also know which tracks are currently playing and navigate through them.

You can use the iRoar Go as a speaker for your PC by connecting it through a micro-USB cable. I only tested it on Linux (Linux Mint 18.1 “Serena”, Cinnamon edition) and it works great there: I just had to connect the cable for it to be detected by the system and made available for audio playback. It usually takes a few seconds (5-10) for the speaker to be selectable in the system interface, but there are no drivers to deal with. macOS users should experience the same, while Windows should be a bit more complicated as usual – you need to download drivers and the Sound Blaster Control Panel (which is also available for macOS, but it’s entirely optional).

The jack adapter is included in the package because the iRoar Go can also work as a PA speaker – that is, you can use it for presentations or… karaoke. Whether you’d like to use it for professional or entertainment purposes, anyway, you can connect any microphone with a 3.5 mm jack using the provided adapter.

The integrated microphone does a fantastic job capturing the voice in mildly quiet environments; the sound is clear and loud enough and the general call quality is comparable to the one you get with your phone’s speakerphone.

Battery does a good job in making the device an all-day companion: the 12 hours figure Creative advertises on their site is mostly realistic, whichever connection you use. Of course your mileage may vary.

Alas Creative does not provide too much information about the speaker: the company did not publish nor the frequency response nor the power output. We know the subwoofer is 2.5″ and the two tweeters are 1.5″, though.

When connected to a source via jack cable, the speaker truncates sounds when the volume is too low, meaning it will just stay silent when the track’s volume goes below a certain threshold. Track outros and intros will be completely cut off if they are too quiet. This problem is not present using nor Bluetooth nor micro-USB.

Sound is not perfectly natural, but all in all it stays balanced and pleasant. It is good enough to listen to all modern genres, but you wouldn’t want to use it to listen to classical music or jazz. This happens because the resolution is not stellar, nor is the instrument separation.

Bass is not underwhelming, as one should expect when dealing with portable speakers; it is, however, very much decent thanks to good definition and control. It is also deep enough to pack a bit of punch, and this is especially notable with electronic music. Using the “ROAR” mode (more on that below) it improves both in terms of volume and of texture. The only complaint I can make is that bass is not that on par with mids and highs at lower volumes, as it becomes less audible. The track Armory from the TRON: Legacy soundtrack by Daft Punk sounds incredibly good for a speaker this size and the bass there is engaging and full – the bass is not very deep, but it’s actually very nice.

Midrange is a bit of hit and miss, as it can sound great or awful depending on the track. Most of the time it is rich and detailed, with good clarity and a nice depth, but it sometimes get a bit muddy and loses a bit of detail. As an example, Dying Brokenhearted by German neofolk band Empyrium sometimes sound a bit muddy and boomy, but it generally keeps a nice polish and detail on the acoustic guitar – which is quite an accomplishment. Vocals often stand out from the other instruments and are natural and full.

Treble is this speaker’s Achilles’ heel. There is not much extension and detail often leaves a lot to be desired. I often turn to Take Five by The Dave Brubeck Quartet to understand a speaker’s treble character. The cymbals are just little more than sketched, without that fine attention to the smallest touches of the drumstick the audiophiles look for. Of course I am just being extremely pedantic, because it actually sounds good given the size of the speaker, and I never really complained about treble quality while listening to the iRoar Go.

The “ROAR” mode, as in previous Roar speakers, boosts bass and highs and is designed to also generally raise volume. It’s great if you want to use the Creative iRoar Go at a party, as it allows the speaker to produce louder sounds and to have better (louder!) bass which would otherwise be perceived as lacking. The point is that while the iRoar Go is fairly balanced and is decent sounding for a portable speaker, its default sound signature may sound as lacking for more “intense” genres (i.e. metal, electronic music, etc) and the “ROAR” mode allows to overcome this limitation. There’s also a widening of the soundstage that makes the sound more engaging. It lays a spark of dynamism on the music without altering it too much and this is what makes it great value in my opinion.

The Bowers & Wilkins T7 is a better alternative when it comes to pure sound quality, but it also costs almost twice the Creative iRoar Go and lacks many of the features. The Creative Sound Blaster Roar 2 is bigger, heavier and sounds mostly similar to the iRoar Go, with very few notable differences in how they sound.

Creative sells the iRoar Go for $199.99. No, really! The value for money is impressive as the iRoar Go is compact, has a nice design, boasts impressive sound and has a boatload of features. I have to congratulate Creative for creating such an amazing device. Not only it has all the features and qualities I look for in a speaker, it has more than I would expect while remaining fairly affordable.

The Creative iRoar Go wins my wholehearted recommendation without hesitation. There’s so much to like in this speaker. I’m in love with it.