There’s a reason why Apple decided to go with a more traditional eartip design for the AirPods Pro. And that’s because the triangular design used for the AirPods doesn’t really work with ANC tecnologies. COUMI didn’t get the memo though, and the result is a mismatch of design and features that has you paying a premium without actually reaping any additional benefits from it. The COUMI ANC-860 under-deliver on most fronts due to poor choices, most (but not all) related to the design.

Disclaimer: I received a free unit from COUMI. They sell the ANC-860 for $58. You can find additional info on their website. 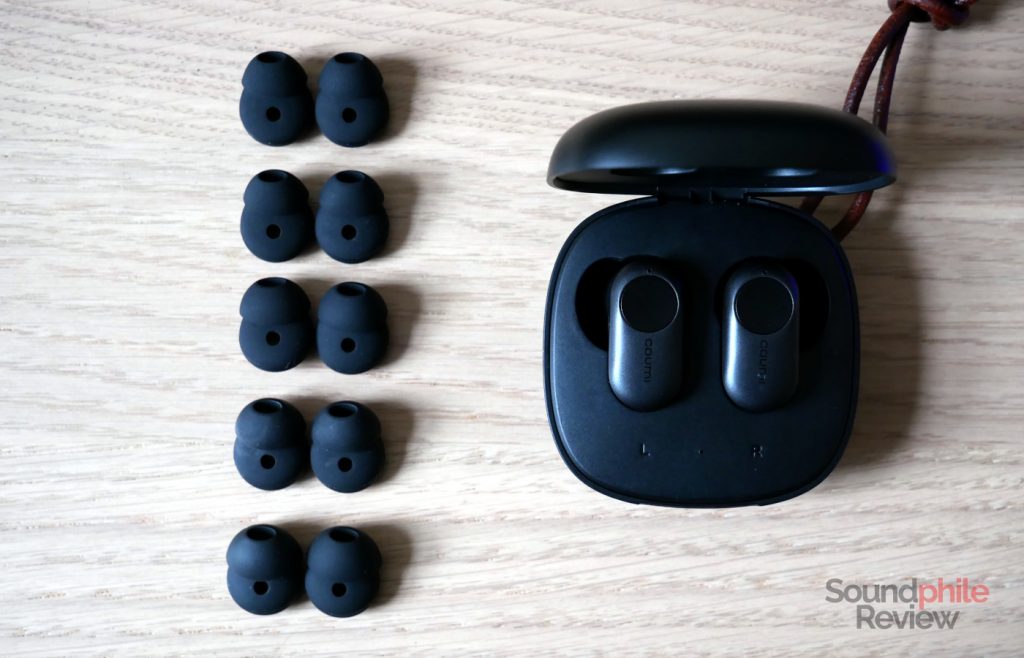 The COUMI ANC-860 comes in a standard cardboard box which contains a smaller box which contains a plastic bag which contains the eartips. It seems like a Russian doll, but they’re actually Chinese boxes. The eartips come in a variety of sizes – six, to be exact – but they’re all so similar to each other that it’s difficult to tell the difference between them. It also means that it might be difficult to find the right size for your ears. There’s also a USB to USB-C cable to charge up the battery, plus a manual. 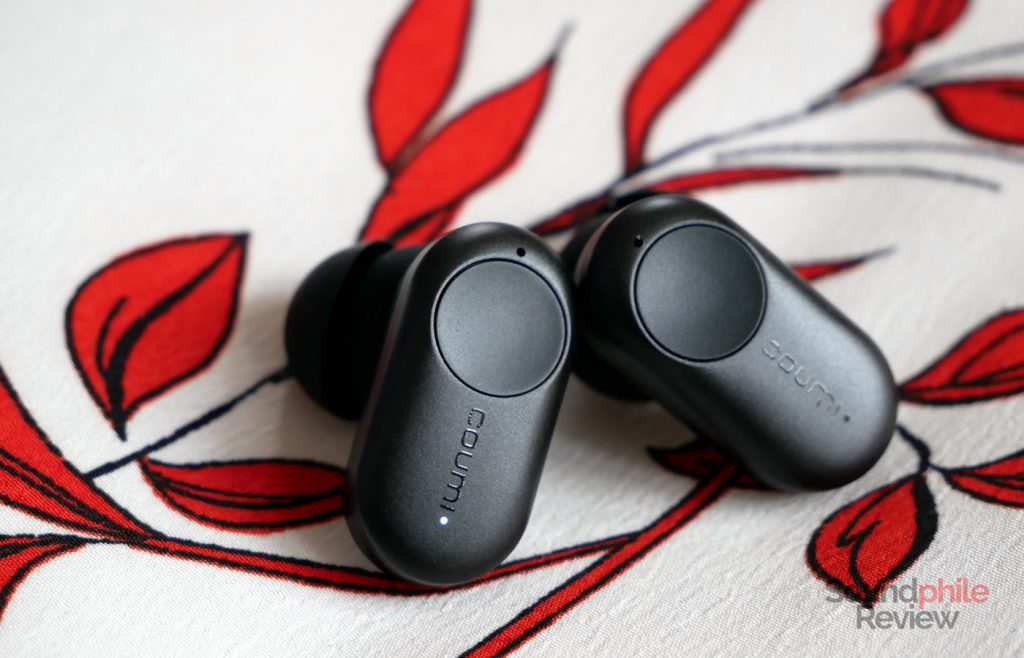 Without the eartips, the COUMI ANC-860 look remarkably close to the AirPods, except for the fact that their stems are bulky and closer to those of “normal” TWS earphones. They’re in fact similar to the Sony WF-1000XM3, except that the stems are vertical. This might seem like a small detail, but it’s actually quite important: the wedge shape of the AirPods is convenient because the stem is small and goes inside the intertragal notch (that small notch you have in your pinnae under your ear canals), so they stay comfortable. It’s basically smart design that takes advantage of the shape of our ears to provide a more comfortable listening experience and it’s quite common actually. COUMI didn’t take this into account, so they used the wedge shape but didn’t consider the fact that a large stem won’t fit in the notch and will therefore cause discomfort. 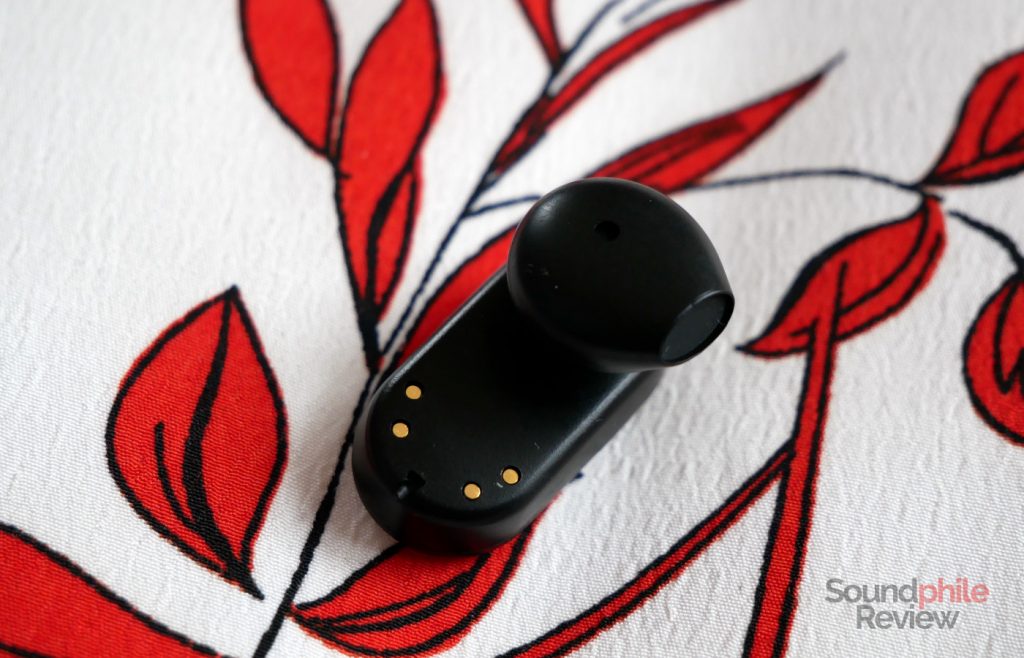 That’s the case here: the ANC-860 are very uncomfortable and require a lot of work to find the right position. If you switch the two channels you end up with the stem pointing upwards and it is so much more comfortable, but it looks horrible and you get the imaging all wrong (stuff on the right is on the left and vice-versa), so it’s not really an option. I found the ANC-860 to be very poorly designed from this point of view, and even more so because of the eartips. They’re of the wedge-shaped variety, which makes it very difficult to find a good seal. As the earphones use the AirPods wedge shape, you can’t even replace them with “traditional” eartips that would provide better seal and passive isolation.

The design of the ANC-860 is flawed beyond repair. The result is that the earphones look cool but are actually unusable for long periods. Removing the eartips makes the situation even worse, to the point I could not get any decent sound out of it as they simply wouldn’t stay in my ears.

Build quality is average, unlike the presence of the IPX7 certification which is quite unusual at this price point and allows you to do basically anything but swim with the earphones.

Isolation is basically non-existent whichever tips I choose. This also means, as we’ll see later on, that the noise cancellation is completely ineffective. 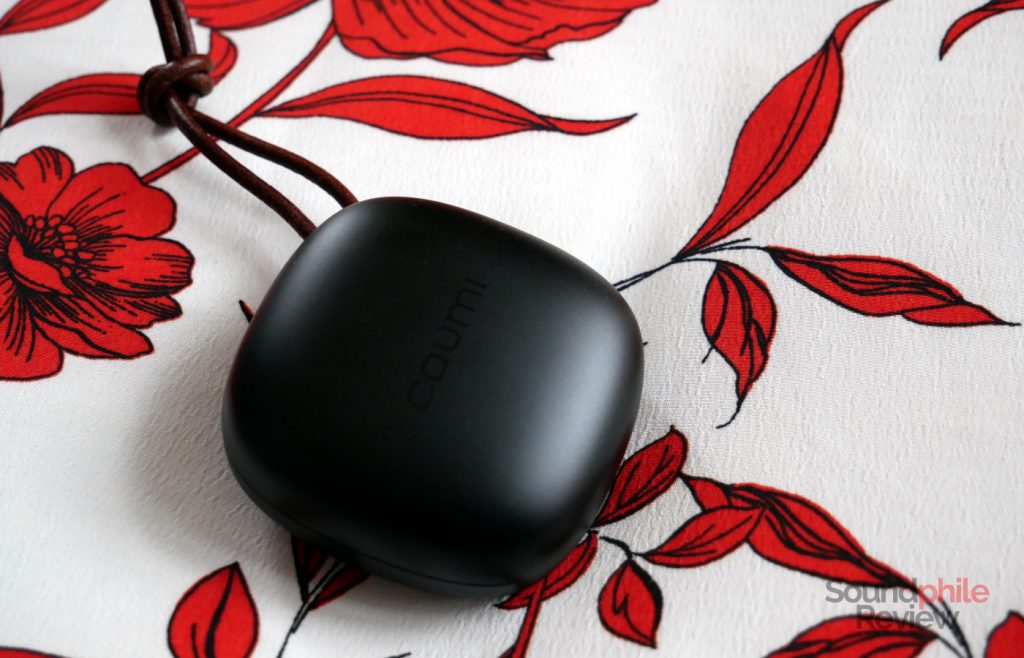 The case is quite nice, as it is small and made of solid black plastic; it also has a loop made of  (actually plasticky) rope. It has a USB-C port and a status LED inside. It’s also quite lightweight, so you can put it in your pocket and forget about it. 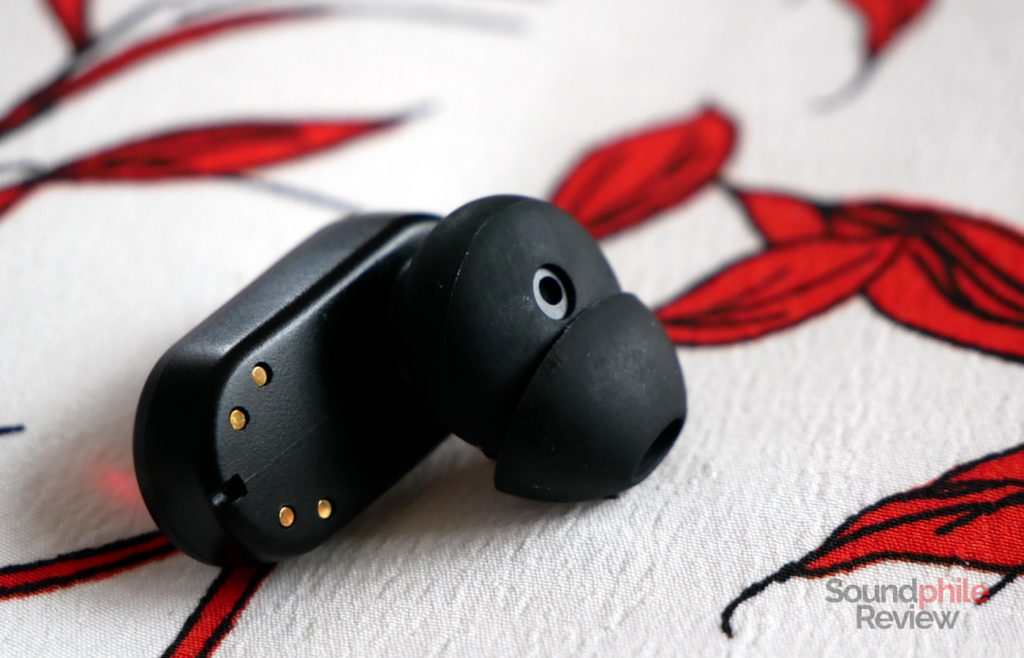 The COUMI ANC-860 use the Bluetooth 5.0 standard, paired with the standard SBC codec. There’s no high-quality codec, not even AAC, available. Signal strength is average and allows me to move around the room, but it falls as soon as I go outside it.

COUMI boasts active noise cancellation for these earphones, but its effectiveness is effectively null due to the lack of isolation. As the eartips do not provide any seal, they fail to create a barrier between your ear canal and the outside world, so that sounds are able to enter your ear without anything stopping them. However good the ANC technology might be, it can’t do all the work and remove all the sounds that enter your ears. In fact there is no difference whatsoever between the feature being on or off. There is no difference when using the “transparent mode” that replays sounds from outside as well.

There is a rather complete set of controls that allow you to play and pause music, go to the previous or next track, adjust volume and activate the voice assistant. There’s an issue in how the commands are set up, though: if you long-press either earphone for one second you activate the voice assistant, if you do it for two seconds you change track. So you have to time your presses in order for them to do what you want, which is quite inconvenient. 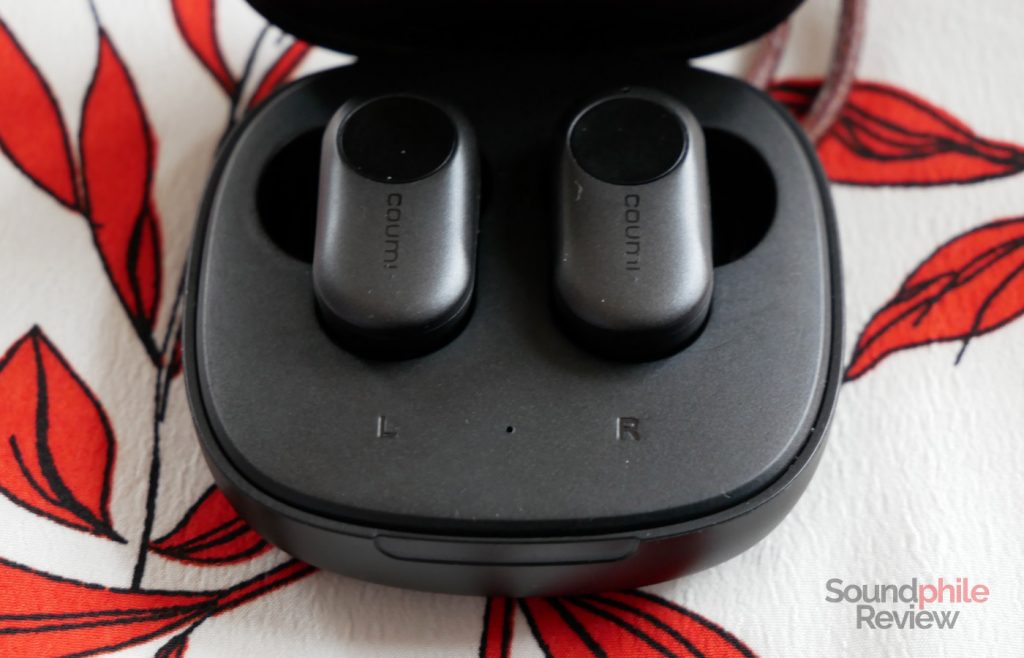 The battery life is rated at 5.5 hours with ANC on and 7.5 hours with ANC off and this figures are actually quite spot-on, as they are exactly what I found them to be in my experience. The case afford you three full charges, which brings the total to around 30 hours.

Like most cheap Bluetooth earphones out there, the COUMI ANC-860 concentrate on features and leave sound almost as an afterthought. In fact these earphones have a “mainstream” tuning (V/L-shaped) where bass dominates everything else and with little technical ability.

Soundstage is quite small and has no depth, leading to the classic sensation of having music coming from the centre of your head, between your ears. The impression I have is that music is playing inside my head and that my ears are on the outside of where the music is playing. It’s so weird! As you can imagine from this descrition, imaging is quite terrible. Instrument separation is limited and you can only distinguish the main instruments, with secondary ones being largely undetectable.

Bass is the absolutely predominant area of the signature. It’s in front, on top and around everything else – if there’s any bass in a track, it gets pumped up to 13 and it gets to dominate the scene undisputedly. This makes sound as a whole quite dark and gloomy. The other issue is that on top of quantity being excessive, it is also not really high quality: it’s slow and not really detailed, so it sounds almost monotonous (as in “made of a single note”). It’s also not quite deep, as you can expect from cheap earphones, which doesn’t exactly help it elevate itself. On a track like Daft Punk’s Contact bass becomes completely dominant and basically wipes out all the lower midrange.

Midrange is suffocated by bass, so it is often in the background. Despite this tuning, midrange is not quite warm and instead sounds metallic and sibilant, with shrill, nasal male voices and excessively emphasised female voices. In a track like Daft Punk’s Fragments of Time the guitar takes the front stage, even though it should be synths at the front. There’s also enough detail not to create a mash-up, but from a general perspective it’s quite limited.

Treble is limited to the lower area, so there’s very little extension and I suspect this has a direct consequence on the soundstage and imaging. It also doesn’t provide any contrast with bass. Detail is limited and only showcases the main elements of the sound, without offering much in terms of how many things you can hear – cymbal crashes sound flat and dull.

The COUMI ANC-860 are cheap, often being offered at less than $30 through sales and offers, and this has a direct impact on the sound quality. They’re poorly designed, so they can’t offer neither comfort, nor good ANC, nor good sound. They have a good battery life, but that’s probably the only thing they have going for them. I can’t recommend them even if you want this kind of sound, because the quality is really not on par with other earphones you can buy on the market. Save yourself some money and buy better offerings, such as the 1More ColorBuds or, if you want ANC, the very good dyplay Shield Pro ANC. The COUMI ANC-860 aren’t worth it.