Sony’s comeback in the wireless, active noise cancelling headphones market is a sweeping success. The new Sony MDR-1000X, first introduced during IFA 2016, are among the best in their category. Not only are they great at keeping noise out, but they also sound fantastic.

Disclaimer: I got the Sony MDR-1000X on loan from the local Sony press office and I had to return them. 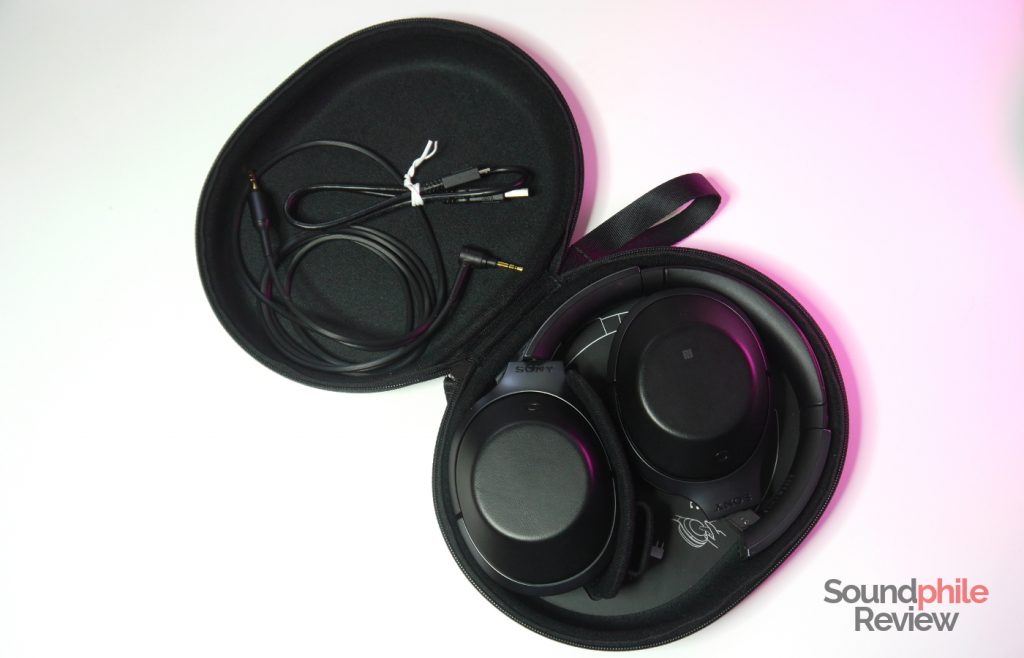 The Sony MDR-1000X come with a hard carrying case covered in synthetic leather and tissue. It only hosts the headphones: the included cables (one USB to micro-USB and one 1.5 m cable with 3.5 mm jacks) do not have any reserved space inside the case. An airplane adapter is included, but it seems previous testers lost it. The packaging is overall very simple, yet it lacks nothing. 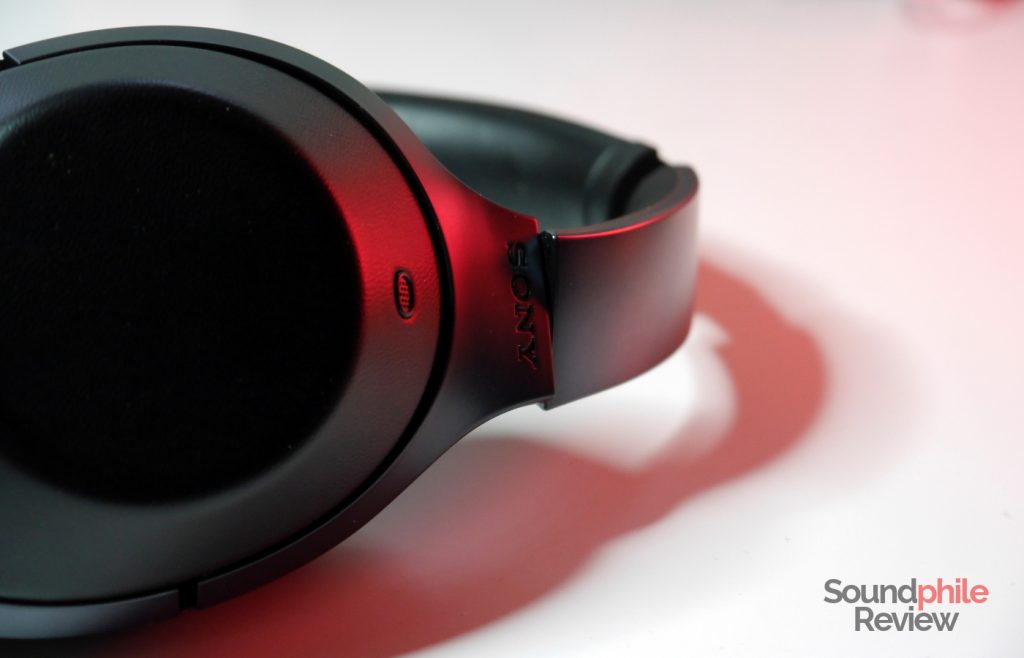 When it comes to design, the Sony MDR-1000X appear like a mashup of the Sony h.ear on and the Bose QuietComfort 35. They are different from both, though: the headband is made of brushed aluminium, most parts are made of plastic (i.e. the swivels) and the earcups are covered in artificial leather. This mix of materials indeed is a strange mix, which in turns produces a look neither too serious nor too young and informal.

The headband’s design is a prime example of good design: the sliding part which allows to set the size unveils the aluminium band which runs throughout the whole length of the headband – from one earcup to the other. Not only is this visually appealing, but it also highlights a solid build which should last for years without the headband cracking. The weight is 277 g, which is on the bulkier side of “acceptable”.

Black is the dominant colour in the Sony MDR-1000X, with metallic accents on the headband and the earcups’ frame. They are overall very polished and pleasing to the eye. I have to note they are fairly large, though: the earcups are 5 cm tall when placed on a table. That’s not what I’d call small!

Build quality is top notch: Sony chose solid yet elastic plastic, so I do not think build could cause issues even after years of use. One thing I appreciated is the earcups turning 90° with the padding facing down, so I could wear them around the neck without sacrificing comfort. 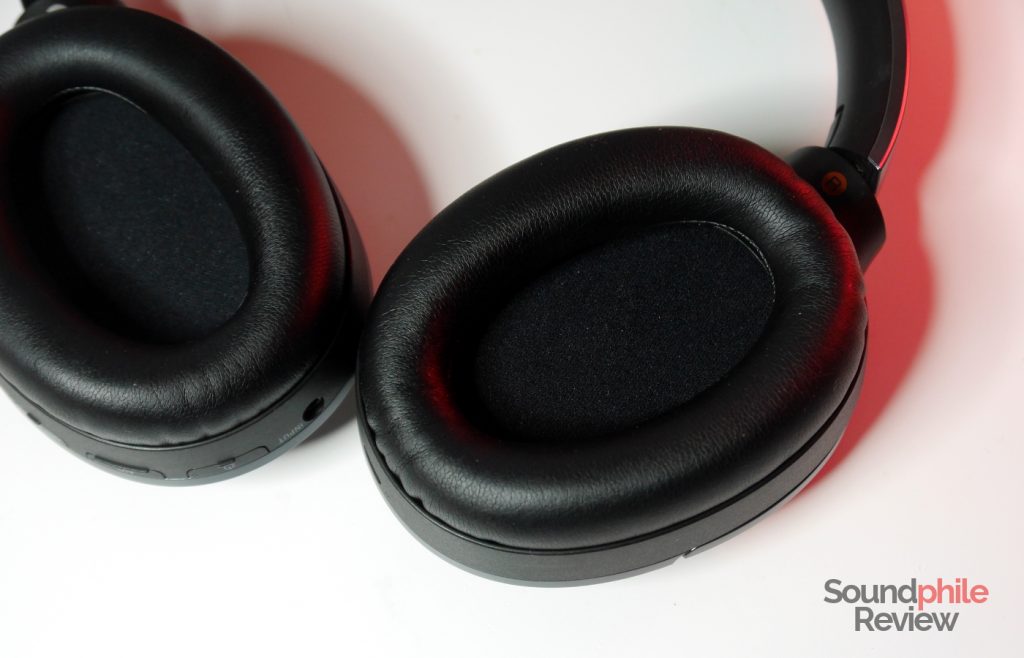 There is a generous amount of soft padding both in the headband and the earpads, which are covered in artificial leather. The earpads are shaped after the ears and the head, so there is more padding left and right of the ear and less above and below. Comfort is therefore very good, at least on par with the Bose QuietComfort 35. I noticed a bit of heat builds up after about half an hour of use.

On the side of the left earcup are three different buttons (power, ANC on/off, ambient mode) plus the 3.5 mm jack receptacle; the right earcup hosts the micro-USB connector to charge the headphones. 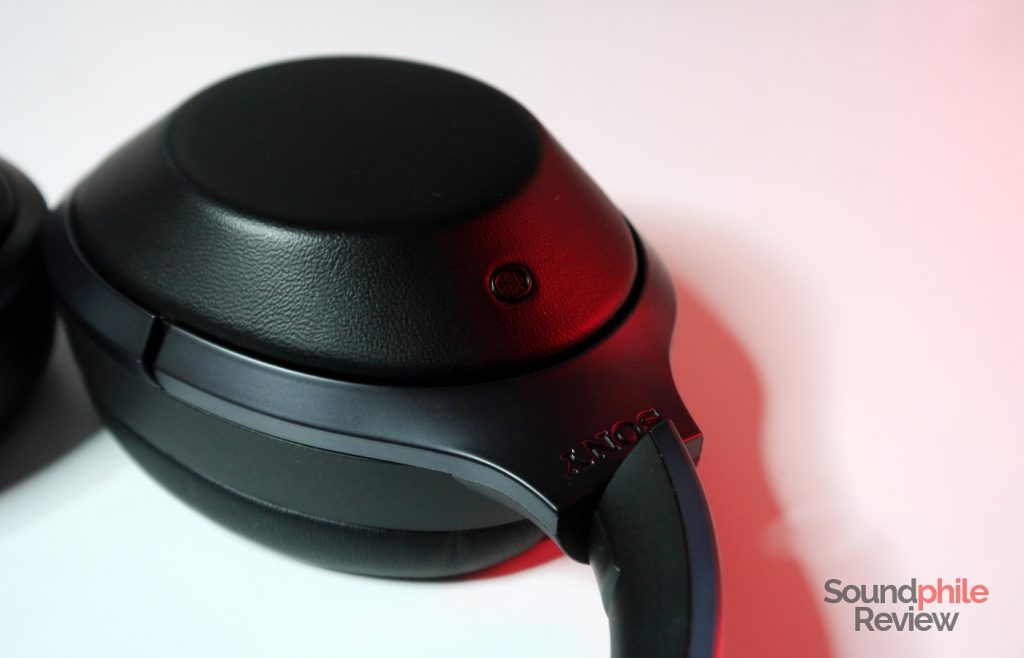 I’d dare say the feature that sets the Sony MDR-1000X apart is the active noise cancelling (ANC). And it’s a very effective noise cancelling tech, too: Sony managed to create a product which can compete with the Bose QuietComfort 35, which is quite an achievement in itself. Lower frequencies are completely cut off when one wears the headphones. This is made possible by one microphone per earcup, which also allows for a better directional pickup of sounds and, therefore, a better overall noise cancelling when compared to microphones on one cup only. There also are microphones inside the earcups.

The SENSE ENGINE makes the noise cancelling more effective by sensing the ambient around the listener: using the microphones inside and outside the earcups and playing a few tunes, the MDR-1000X hear the noise and adjust the cancelling to be more effective. This makes them better at adapting to real-world situations.

Unlike other noise cancelling headphones I tried, the Sony MDR-1000X did not create a sense of pressure on my ears while ANC is on. As a consequence, I could go on listening to music for hours without feeling any fatigue. The only issue I think worth mentioning is the relatively inefficient passive isolation: the earcups cannot effectively block sounds, so there’s sounds which will creep in (i.e. people’s voices) despite noise cancelling. 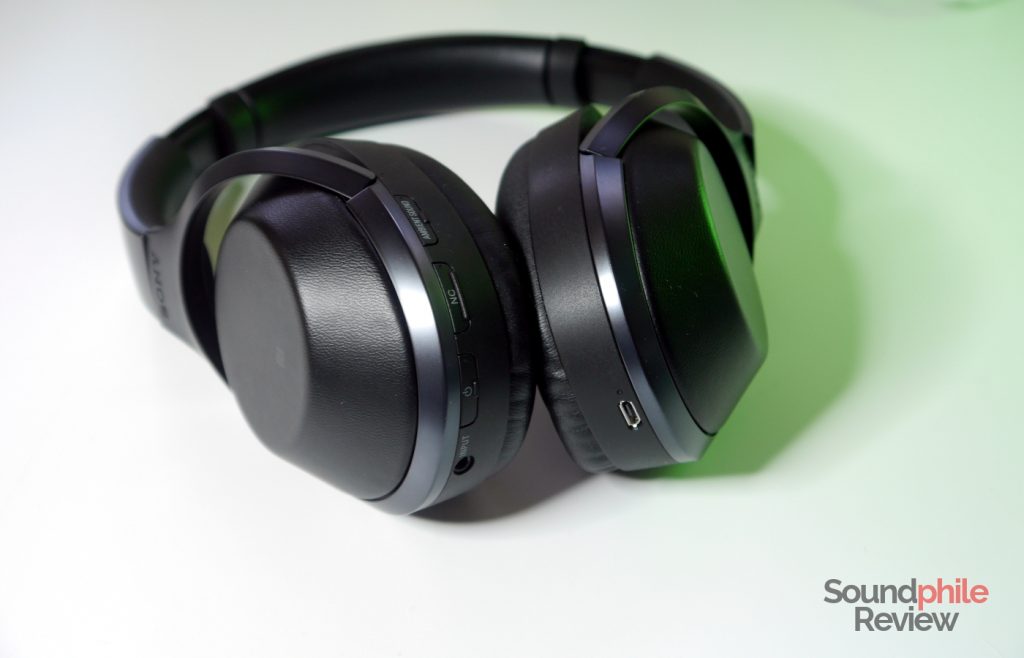 What if you would like to temporarily disable ANC, to hear an announcement aired at the station or talk with someone without taking headphones off? You can simply cover the right earcup with your hand. This is the kind of “smart” features Bose products lack and which highlight the good work Sony has done in terms of user experience.

Playback is controlled by tapping on the right earcup: it is touch-sensitive and there are no physical buttons to control playback – this also means you can’t control volume, play or pause if using the headphones with the cable and them being off. Play or pause require two taps, while all other gestures are swiped – up raises volume, down lowers it, right/forward skips to the next song and left/backward goes back to the previous song. The need for more than a single touch to activate functions means one can take the headphones off without accidentally resuming playback.

Thanks to the “ambient mode” I previously mentioned, one can have selective noise cancelling that lets them hear other people’s voices or broadcast announcements (i.e. in stations or airports) without completely turning off ANC nor stopping music. The headphones pick up the desired sounds and play them, so it’s like having a super hearing! 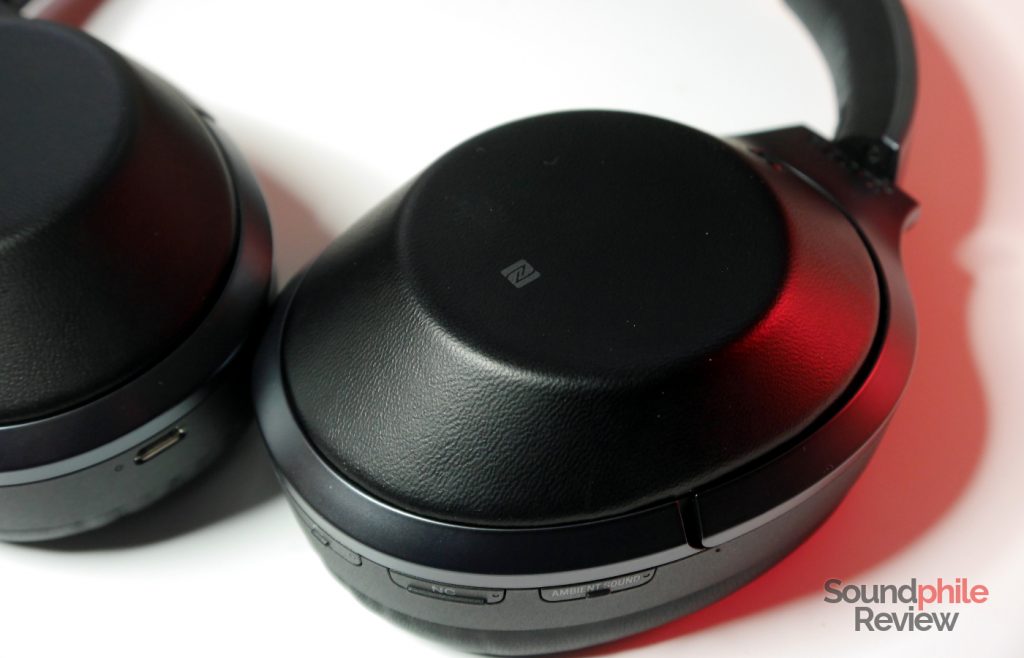 The Sony MDR-1000X do feature the aptX codec, which improves music quality thanks to better compression when compared to other codecs (i.e. AAC or SBC). aptX is only found on Android devices and on Windows PCs with compatible Bluetooth adapters, so Apple users will be out of luck.

Compatible products can also take advantage of the LDAC technology: developed by Sony, the tech makes it possible to raise the stream’s bitrate to 990 kbps, thus allowing for CD quality FLAC files to be streamed without further compression.

Talking about “smart” features, the headphones turn off when cable is disconnected, so you won’t have them running out of battery if you forget to turn them off. Battery life is very long and the 20-hours figure Sony advertises turns out to be a bit conservative, as I was able to squeeze more than that.

The microphone to perform phone calls works decently well and can capture your voice even in relatively loud environments. I had to raise my voice in especially crowded environments, though, so it still does not equate with the Parrot Zik headphones.

As the headphones I got to try were a sample which circulated in most of Italy’s tech newsrooms, I do not know how much they have been used – but I feel comfortable saying it is more than the 100 hours I usually reserve for burn in. I used the Sony MDR-1000X both with Bluetooth (and my trusty Lenovo Vibe Shot) and attached to my desktop PC via a Topping A30 + Topping D30 stack (hint: review is coming!). Source files were FLACs and occasional MP3s (320kbps).

Not only is there a difference in specs as outlined above, but also a difference in sound. When the headphones play while turned on, their frequency response is more balanced and tends more towards flatness (while retaining its slight V shape), but when they are powered off the midrange falls further down and the V shape is much more pronounced.

When using them as a wired unit, the MDR-1000X seem to have a tighter and deeper bass, better instrument separation, and better overall detail. Part of that is to be expected because of Bluetooth limitations (e.g. treble detail) but, while noticeable, the difference is not night-and-day and this highlights the good work made by Sony on both its S-Master HX engine and general DSP processing.

The Sony MDR-1000X have a bit of a dark timbre, thanks to generous bass and slightly emphasised mid-lows which put them in the consumer-tuned range. There is a very nice spatiality to the sound, which appears wide and deep. Instrument separation is fantastic for a Bluetooth product, as you can tell different instruments apart with relative ease.

Stereo imaging is just plain wonderful: listening to Take Five by Dave Brubeck I could hear the from coming from the right and echo of the drums coming from the front – it seemed to be there, as if the sound was coming from my desktop speakers. I certainly did not expect it from Bluetooth headphones!

I would say the Sony MDR-1000X sound is pure entertainment: it’s got thumping lows, clear and vivid mids and crispy highs. The ingredients for a nice recipe are all there and, in fact, the MDR-1000X deliver high performance.

Lows show good control and depth, which make them especially fun and entertaining. Despite being emphasised, I don’t perceive them as excessive – they sit just on the right spot, equally distant from being overpowered and bloated (i.e. as on SOL Republic Master Tracks) and from being perfectly neutral and therefore sometimes a bit too shallow (i.e. on the HiFiMAN RE-00, even though those are in-ears). Bass has a nice musicality to it, thanks to which it adds engagement to electronic music and body to jazz or classical, but it does so in a discrete manner. I would define bass as rhythm-rich, as opposed to slow and smooth: it’s great for dynamic songs because it’s fast and vibrant, but it is not slot nor smooth in the sense that it is not covering and persistent. It’s great for modern genres which require fast, engaging bass.

Mids are decently clear and detailed, with a slight bump in the mid-lows. Tracks which heavily rely on mids, such as those with acoustic instruments, will sound a bit off given the V-shaped sound signature; guitars and voices will be very expressive anyway, thanks to the carefully threaded details and the natural, warm tone. The mids are just not so much upfront as I’d like them to be, but this may well boil down to personal preference.

Highs are crisp, airy and very detailed, but they definitely are not piercing. And while extension may not be really compared against higher-end, wired headphones, treble is much more extended than I’d expect from a Bluetooth headset. In fact highs appear crisp and airy also because of their extension. I wouldn’t think these came from closed-back headphones if I didn’t know! What I especially liked is the separation from the rest, so you can really focus on them.

A comparison with the Bose QuietComfort 35 and the Plantronics BackBeat Pro 2 is coming in a few days.

The Sony MDR-1000X may be regarded as the best noise-cancelling Bluetooth headphones currently available on the market – not because they are the best at cancelling noise (though I think they are), but because of the overall outcome. They’re very good at cancelling noise, they’re very good at offering good sound quality and they offer a good amount of smart features. They’re also comfortable and sport a nice, modern design with a solid build.

This clever mix makes for a compelling product, which has very few cons and lots of pros. They may be a bit pricey – ~$350/€340 – but they’re so worth their price. I think the competition will have a hard time with this one. Chapeau, Sony.